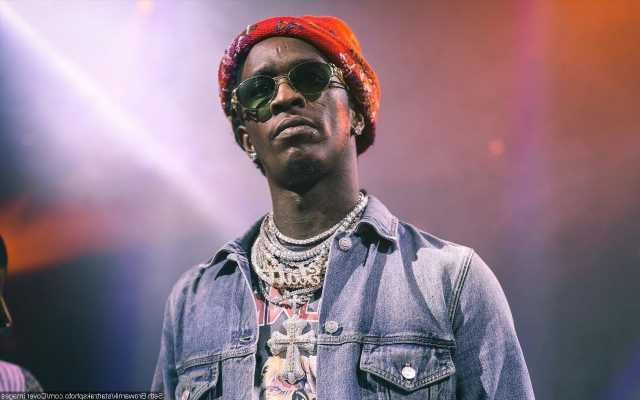 A video shows Kahlieff Adams performing a ‘hand-to-hand’ exchange of a Percocet pill with Thugger inside an Atlanta courtroom during the rapper’s trial in the RICO case.

AceShowbiz –Young Thug is accused of getting drug from a fellow defendant inside a courtroom. Unfortunately for him, he was caught red-handed during the apparent drug deal and the bold action was caught on camera.

In courtroom surveillance footage which has circulated online, co-defendant Kahlieff Adams was seen walking unattended and approaching Thugger, who was sitting next to his attorney. Kahlieff then extended his closed right hand to the rapper, during which he allegedly slipped Thug a Percocet.

Thug was seen extending his open right hand and accepting an item, which he quickly put under the table where he was seated. A deputy saw the transfer and immediately confronted Thug, who then handed the pill over.

Deputies began searching Kahlieff for any additional drugs. They claimed the search yielded more Percocet as well as marijuana and tobacco, which were “wrapped in plastic and food seasonings to conceal the odor.”

Kahlieff was reportedly taken to Grady Memorial Hospital after he ingested “other items of contraband in an attempt to conceal the extent of his crimes within the courtroom.” As a result, the trial has been delayed.

“The reason for the delay is that we’ve had yet another instance of alleged contraband being introduced to our space. As a result of that and a subsequent investigation, one of our inmates unfortunately had to go to Grady hospital,” Judge Ural Glanville said before announcing the court would go into recess for the day.

“One of the co-defendants on his way to the restroom attempted to pass something to Mr. Williams who immediately turned it over to the deputy,” Keith noted. When asked if Thug knew it was Percocet being handed to him, Keith said, “He did not know. We don’t know what it is, did not know. It was turned over to a deputy right away.”

It was the third instance of contraband smuggling since the start of the trial. Another defendant’s mother was reportedly arrested for bringing “tobacco products” for her son in a bag of clothes. Last week, Judge Ural Glanville stated that a person brought marijuana hidden inside the shoes.