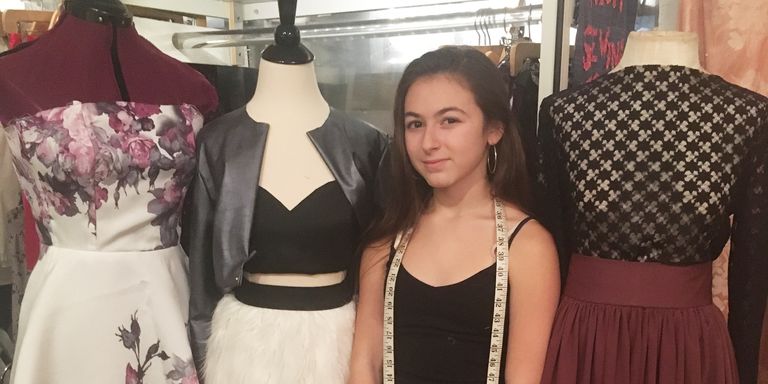 Thirteen-year-old Ava Barash watched a news segment on a nonprofit organization with her mom back in February and was so moved, she decided she’d save up some money and even donate her bat mitzvah gifts to the group’s cause. Barash is an aspiring fashion designer, and the org in question, the Humans of Fashion Foundation, aims to create a safe space for workers in the fashion industry to address workplace misconduct, like sexual harassment, abuse, and assault. It also provides pro-bono and subsidized counseling and legal work for victims.

Two Women Plan to Shake Up the Fashion Industry

This particular cause spoke to Barash, she says, because she’s a designer herself — her bat mitzvah, held in March, was actually a fashion show featuring real teen models, makeup artists, and a front row. As someone who stays informed on current events and who eventually wants to work in the fashion industry, she felt compelled to help out.

“My mom and I have talked about #MeToo — she tells me what it’s about and what’s happening with people who are in bad situations with positions in their work,” Barash says over breakfast in Manhattan with HOF’s founders. “I feel sad that people have to go through things like this. But I’m also happy that people are speaking up and making themselves heard to create awareness so things like this don’t happen as often anymore.”

In order to donate, she e-mailed the foundation, got their address, and sent a check for $500. “I sent them a letter, and some things from my fashion show too,” she says, handing over the line-sheet from her show, which described 15 looks and had the foundation’s website written on the back. “I was hoping by having that on the pamphlet that my friends and family would donate also, because this is just very important to me and to a lot of other people.”

The organization’s co-founders, Antoniette Costa and Kristina Romanova, got emotional when they saw Barash’s note. “I teared up, because it was hand-written!” Costa says. “Had it been $5 or $10, it wouldn’t have mattered — to us, she was one of our first donors, so it meant a lot.”

For Romanova, the letter was inspiring for another reason. It arrived the same day Karl Lagerfeld made disparaging comments that appeared to diminish and belittle fashion’s role in the #MeToo Movement. “[Ava’s letter] was a beam of light,” Romanova says. “That day, we read the Karl story and then got Ava’s letter. To me, it was a sign that we still have hope in our society with these amazing young people, this younger generation.”

For her part, if she becomes a big-name fashion designer, Barash plans to use her platform for good. “I want to be very positive so that other people are very positive,” she says. “I would want to make sure everybody’s nice to each other any way that I could.”