It took about 12 years for Elaine Stott and Tonya Thomas to give each other a shot. They worked together in the same Toyota plant in Kentucky, where a mutual friend would tell both of them how great the other was. Ms. Stott and Ms. Thomas wouldn’t hear it — at least early on.

“We didn’t get along too good,” said Ms. Stott (right). “We’re both pretty strong-willed and opinionated. But our friend would say, ‘She’s not what you think!’”

What both didn’t realize, until they started hanging out during break times, was their friend was right.

“When our friend quit, we were the only two left, so we spent all our breaks together,” Ms. Stott said. “We realized we were both the same — goofy as all get-out, and we started to realize that we were good for each other.”

Still, it took some time for Ms. Thomas, 37, to give Ms. Stott, 42, a chance. Neither can say when their first official date was, but their love story began some five or six years ago, culminating with Ms. Stott stumbling into being the first one to say, “I love you” — or rather, “I got mad love for you,” later covering with, “I love Jesus!” until she finally spilled the beans about her true feelings. 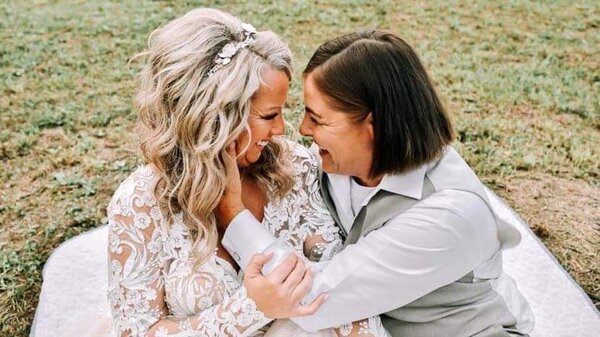 While the couple describes Ms. Thomas as the “worry wart” of the two, it was Ms. Stott’s easygoing personality that helped the couple navigate one of Ms. Thomas’s biggest concerns when they started dating: she has two children from a previous relationship. She was initially very nervous to introduce Trevor, 20, and Hunter, 15, to her new partner. But her concerns were quickly put to rest when they unequivocally accepted her into the family.

“I went from having paranoia about what they’d think to the whole thing being totally not what you expected,” Ms. Thomas recalled. “They saw the difference from other relationships — they saw what happiness is supposed to look like.”

Ms. Stott’s personality also helped her become an immediate fan favorite on Season 39 of the reality TV series “Survivor.” Her warm attitude, thick Kentucky accent, and popularity among the castaways helped her last 35 days before being voted off the island.

Ms. Stott had tried out for the show four times over two decades. While her attempt at the top prize fell short, she did get the attention of the recording artist Sia, a notable “Survivor” fan who likes to dole out cash to her favorite contestants. She awarded Ms. Stott $100,000, which would eventually help pay for the wedding (and it also allowed Ms. Stott to pay off her bills and buy out her family to be the sole owner of a farm).

When Ms. Stott made it far enough in “Survivor” to the day where family got to come visit the castaways in Fiji, she speculated about proposing that day. It was a big deal for Ms. Thomas to be there — it would be the first time she flew on her own. Ms. Stott even made a ring and had it on hand during the physical challenge, in which castaways competed for a chance to spend more time with family. She was paired with eventual Season 39 runner-up Dean Kowalski for the challenge, and told him that if they won, she would propose. They just barely lost.

“Dean felt bad about losing,” Ms. Stott said. “But he had recently become ordained and was going to do his friend’s wedding when he got off the show. So we made this plan back at the camp where Dean and his brother would come visit us in Kentucky. They wanted to come have a redneck vacation! Then Tommy Sheehan said he wanted to go, a couple others said they wanted to come, and it morphed into a bunch of them that came out for the proposal.”

Contestants from that season were there, including the winner Mr. Sheehan, Mr. Kowalski, Chelsea Walker, Kellee Kim and Lauren Beck, when Ms. Stott proposed on the Stott family’s 100-acre farm in Rockholds, Ky. Ms. Thomas thought she would be getting a horse, instead she got a ring.

The couple were married outside at the same farm on Sept. 25, 2020, surrounded by some 80 guests. About a dozen of them were “Survivor” contestants, including Mr. Kowalski, a Universal Life minister, who officiated at the barn.

“It was a total redneck wedding,” Ms. Stott said with a laugh.