Home » Fashion » All the Feelings on a Brooklyn Stoop

Timah Kabba had to brace herself on her first date with Gaby Núñez Santiago at Lord Hobo, a restaurant in Cambridge, Mass., in May 2018. “I don’t really catch feelings,” she said. “Definitely not in the beginning. But the light in there was really good, and when we sat down across from each other I was like, ‘Whoa, powerful eyes.’”

Ms. Kabba (left), 31, was coming off a year of romantic letdowns when Ms. Núñez Santiago’s dating profile on OkCupid caught her eye. She was already subscribing to a four-date limit. “I was hoping for something great to happen, but I also have a short attention span,” she said. That Ms. Núñez Santiago captivated her with three dates to spare came as a relief. Ms. Núñez Santiago fell hard, too. “I was in love by our third date,” she said.

Ms. Kabba is the creative director at Tempest, an addiction recovery program. Ms. Núñez Santiago, 28, is an expressive arts therapist and support-group manager at the Network/La Red, a nonprofit group that works to end partner abuse. They live in Crown Heights, Brooklyn, but came together in Cambridge by way of Sierra Leone and Puerto Rico.

Ms. Núñez Santiago moved to Cambridge from Puerto Rico for graduate school at Lesley University in 2014. Ms. Kabba is a Massachusetts native whose parents immigrated from Sierra Leone in the mid-1980s. “One of the things we connected over was our commitment to social justice,” Ms. Núñez Santiago said. “But I remember being kind of surprised by how many parallels we had culturally. Talking about the food and the family dynamics really helped us understand each other.”

When Ms. Kabba left for a summer-long design assignment in Dubai in June 2018, they had drawn a boundary around their relationship and worked at finding the vernacular to define it. “I think I wanted to go with ‘girlfriend’ because ‘partner’ felt so intense,” Ms. Núñez Santiago said. “But ‘girlfriend’ sounded kind of frivolous. There was a lot of gender stuff we had to work through.”

Their commitment to each other didn’t require a name, though. All that summer, through the phone, it deepened. By the time Ms. Kabba returned, they had settled on calling each other partner. Two years later, they agreed to become life partners. On Sept. 26, 2019, Ms. Kappa proposed, on one knee, at an Airbnb during a weekend getaway to the Hudson Valley. “I said something like, ‘Of course!’” Ms. Núñez Santiago said. 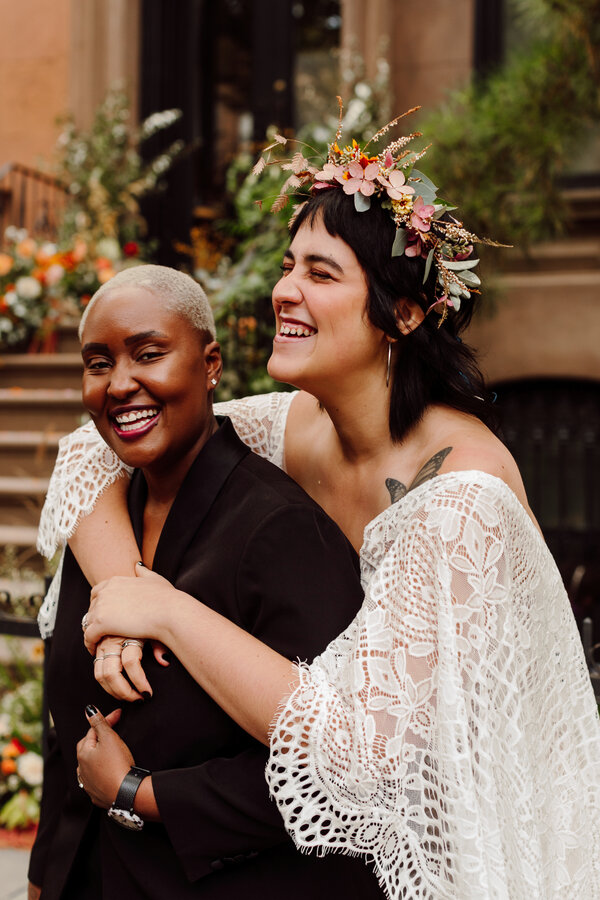 A move to Brooklyn four months later for Ms. Kabba’s job felt like kismet to both. “Gaby had always wanted to live in New York,” Ms. Kabba said. But a month and 13 days after their arrival, the city shut down because of the coronavirus, and with it their tentative plans for a wedding for 100. Then, in October, an Instagram post caught Ms. Kabba’s eye.

“It was a wedding giveaway,” she said. “I had never won anything in my life, but I thought, ‘This would be cool.’” The Brooklyn florist, Liza Lubell of Peartree Flowers, had organized the giveaway. “She’s one of the florists I think of as artists,” Ms. Kabba said.

The stoop wedding on offer at a brownstone held special appeal. “I had seen one a couple of months ago,” Ms. Kabba said. “I thought it was so amazing that the whole neighborhood could get involved at a time when there’s so much pain and fear in the world.”

On Oct. 3, Ms. Kabba and Ms. Núñez Santiago were announced the winners of the giveaway. They were married Oct. 18 by their friend Celia Castro, who had been ordained by the Universal Life Church, on a Park Slope stoop bursting with fat fall blooms. Fifteen guests came; about 75, including Ms. Núñez Santiago’s family in Puerto Rico, watched via livestream.

“I still can’t believe we had the whole experience gifted to us,” Ms. Kabba said. “We were focused on each other for the whole thing. But having people line up in the streets for us brought us so much joy.”