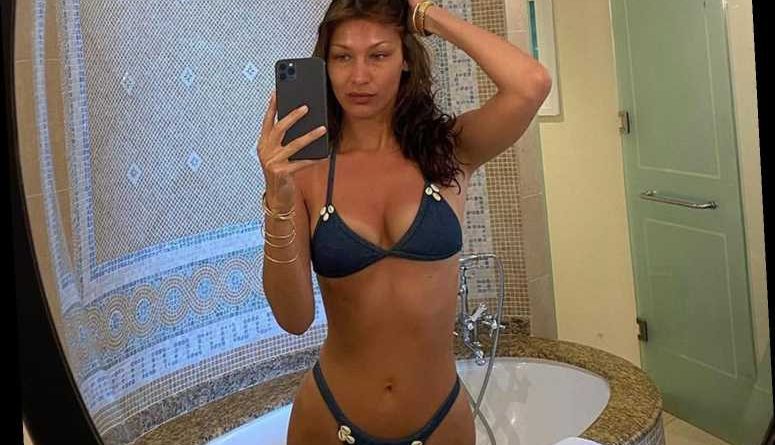 Bella Hadid couldn't help but clap back after one commenter said the model looked "tired" in her most recent series of swimsuit selfies.

After the supermodel, 24, spent the day soaking up the sun, she snapped a few mirror selfies in her tropical seashell-adorned, denim blue bikini. Plenty of fans left the star love in the comments, but there was one negative message that Hadid shut down. Fans quickly applauded Hadid for standing up for herself, while the original commenter replied to the model's remark.

"@bellahadid i'm screaming! did my best girl just reply me?! ☺️ plus hey, you are so gorgeous! your eye bags are a work of art ❤️," the commenter said. A few days prior, Hadid posted a video from the beach after she woke up from a nap, which was likely taken shortly before the selfies.

"I just woke up. Danger Do not leave A sleepy girl In the sun …." Hadid said as she smiled while showing her slightly sunburnt skin in the same blue bikini.

When she hasn't been kicking it at the beach, Hadid spends time in New York City with sister Gigi Hadid, who recently welcomed daughter Khai, enjoying special moments like the first snowfall of the year.

After N.Y.C. was hit with a big snowstorm in December, Hadid shared series of photos and videos of herself attempting to skate across ice in cowboy-inspired Burberry boots and making snow angels in white trouser embroidered with the word "sex" in yellow and black letters. She teamed her NSFW pants with a graphic t-shirt layered over a button down, a cream-colored puffer and a vintage leather jacket.

Her older sister also enjoyed the winter wonderland. The model posted a sweet photo of herself walking through the snow-covered New York City streets while pushing her new baby girl in a stroller. "her first snow 🤍🗽" Gigi captioned the post.