A videographer she brought along traced the zigzag movement, but Ms. Thorne would never post this to Instagram. Her 21.3 million followers don’t go for arts and crafts. They would never appreciate it, she said, switching from pink yarn to purple fluff: “Like, I ain’t even giving it to you, like, it’s too good for you.”

Ms. Thorne was at the Weaving Hand, a small weaving studio and “healing arts center” in the Williamsburg section of Brooklyn. A publicist had insisted that she wanted to learn weaving.

But when Ms. Thorne strutted through the door on a steamy Tuesday afternoon with a small entourage (a manager, assistant, makeup artist, stylist and the videographer), she seemed more confused than eager. 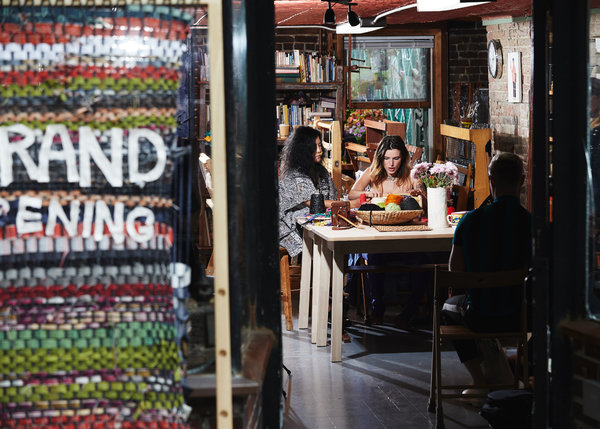 “My mind is a little mentally distorted right now,” she said in voice as creaky as a haunted-house staircase. And she had already cried twice that day, she said: once on Howard Stern’s radio show and again in the car after.

She wrested a palette from her makeup artist, kicked off her periwinkle stilettos and took a seat. Her affect was half brassy, half fragile, heavy on the id. Red hair flared across her shoulders. Her white tank top rode low. A nipple attempted to free itself.

Ms. Thorne, who grew up in Los Angeles and still lives there, had flown to New York City in late July to promote her book, “Life of a Wannabe Mogul: Mental Disarray,” a thin volume of prose poetry and sketches. She had written the acrostics and epigrams (“fall fast not easily”) in two weeks, she said, between calls to set on “Paradise City,” a television thriller.

“I’m a multitasker,” she said.

The poems meditate on her father’s death, the sexual molestation she said she endured as a child, her struggles with depression. She said that she was gunning for the best-seller list. She also said that her publisher, Rare Bird Books, had left out several key pages and messed up the order of the poems.

A model since she was 6 weeks old and a Disney Channel child actress (she starred opposite Zendaya in the tween buddy comedy “Shake It Up”), Ms. Thorne is now a multihyphenate artist and an online sensation.

Last year, she told a camera crew from Vogue that she can earn as much as $65,000 for a social media post. She bought a $2 million house in Sherman Oaks, Calif., with those earnings, and when break-ins and paparazzi made her feel unsafe, she bought another one.

“When did I move?” she asked her manager, as she tied off some thread.

“Right after Coachella,” he said, barely looking up from his phone.

Cynthia Alberto, the owner of the weaving studio, introduced her to the tabletop loom, a wooden contraption about the size of a typewriter, and had her select several spools of yarn. Ms. Thorne grabbed some pink yarn and began to weave, yanking the thread tight. “Give yourself some slack,” Ms. Alberto said.

Ms. Thorne appreciated the metaphor. “I’ve got a tattoo on my knee, ‘Just let go,’ and then I’ve got ‘Hang on for dear life’ on my shin,” she said.

“This is going to relax you,” Ms. Alberto said.

Over the next half-hour, as she spoke emphatically and profanely about other craft projects (a “weird human sculpture” made of broken Polaroid cameras) and how much she wanted pizza, a fuzzy tapestry emerged. “This is amazing,” she said.

It moved Ms. Thorne to think about her own patterns. “I think of Bella Thorne sometimes as just some character that I’m playing,” she said. “But then again, I’m so honestly myself, that what is this character?”

It’s a character people misunderstand. “Why does everybody think I’m such a party girl, literally like what is going on here?” she said. Sure, she’ll go to Chili’s and have a dirty martini and yes, she’ll smoke some weed, and yes, she likes beer. But that’s it, she said.

Her assistant, a waifish young man with bleached hair, sent on a snack run, returned with jalapeño chips and a couple of smoothies. “I told you I wanted pizza,” she said, whining. “I’m very hungry. And if I faint or throw up, it’s not going to be good.”

“Is this relaxing you?” Ms. Alberto said, cooling her with a rattan fan.

“Yeah, it does, actually,” she said. “I like making pretty things. Can I do little bows?”

Mid-bow her phone buzzed. It was her boyfriend, Benjamin Mascolo, a 26-year-old pop star from Italy, his bleached head bobbing on her screen. “Hi, baby. Did you just land?” she said. “Oh, baby, are you walking out of the plane? So excited, baby. O.K., baby, so excited.”

She ended the call just as her assistant reappeared with pizza, one slice loaded with buffalo chicken, another covered in jalapeños. She took a few bites, washing them down with soda, and belching unapologetically.

After pizza, Ms. Alberto displayed her tapestry: a ragged fluff of pink, black, purple and red. Ms. Thorne seemed pleased, a lot less unsettled than when the lesson began. She decided to buy the $160 loom, so she could bring it to the set of her next show.