IT'S one of the most important days of your life – so it's only natural that most brides want all the attention on them on their wedding day.

Unfortunately for one newly-married woman, she attracted focus for all the wrong reasons after suffering an unfortunate accident right before her first dance. 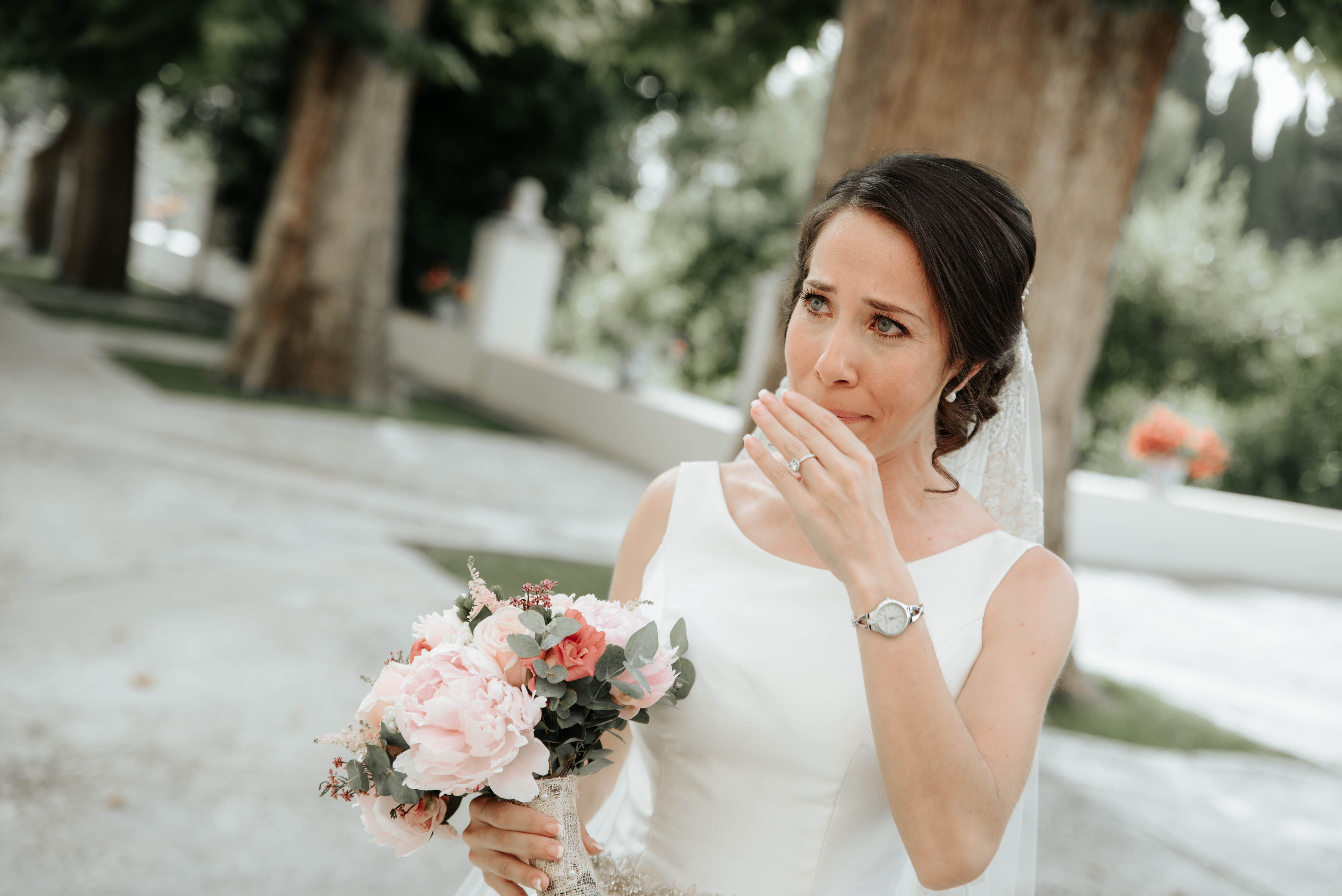 Discussing their worst wedding horror stories on Reddit, the American bride's wedding planner revealed the newlywed had "s**t herself" after downing some detox shakes to fix last minute bloating.

Up until this point, the planner says she had been "quite a Bridezilla" and the "wedding of the two fairly wealthy families took place on a family property in a historic barn".

As a result of this "shabby chic, rustic" setting, the planner had been forced to install portable toilets around the side as there was no electricity or running water in the building.

But despite the obvious difficulties the venue presented, the planner claims everything was going smoothly – that is, until she noticed "the most curious blend of expressions pass over the bride's face" as she was having her professional photos taken. 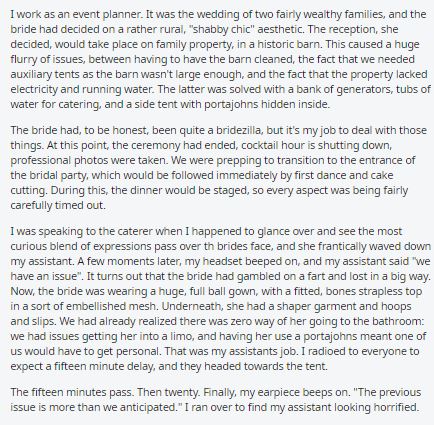 She wrote: "It turns out the bride had gambled on a fart and lost in a BIG way."

As the bride was wearing a £12,000 "huge, full ball gown" with a Cinderella-style "fitted, bones strapless top", the planner quickly realised that "there was zero way of getting her to the bathroom" to clear herself up.

"We had issues getting her into a limo", the planner added.

We can't exactly say we blame the wedding planner for asking her assistant to take the bride to the temporary loos around the corner to, erm, assess the situation.

In the meantime, the planner told guests to "expect a fifteen minute delay" as she guided them in the direction of the tent where the reception would be taking place.

She added: "The fifteen minutes pass. Then twenty. Finally my earpiece beeps on.

"'The previous issue is more than we anticipated.' I ran over to find my assistant looking horrified."

I was speaking to the caterer when I happened to glance over and see the most curious blend of expressions pass over the bride's face. Turns out, she had gambled on a fart and lost in a BIG way

The detox shakes combined with the cocktails she'd had earlier in the day resulted in a "substance no human body should emit".

Without going in to too much detail, the wedding planner also claims the "smell was unrivalled".

And to make matters worse, the bride's bad bout of diarrhoea had collected in her shapewear – like some kind of "water balloon of horror".

The planner added: "My assistant had opened up the snap crotch and just released the evil trickling down the bride's thighs.

"Now I have a shell shocked assistant and a crying bride. You can smell her four feet away."

Amazingly, the bride insists that the show must go on and "she has a choreographed dance waiting to happen".

For reasons we'll never understand, the planner gives the signal to start the introductions and describes how "the groom looks vaguely disconcerted by his new wife's odour."

Sadly, this horror story only gets worse as the groom accidentally "squishes the poo up on the inside" of his bride's dress as he's spinning her around.

"To our horror, we watch as a oily stain spread across the mid-back of the gown," the planner wrote. "As we are still cringing from this, the groom sets his hand firmly in the middle of the poo stain."

I was sponging down a sobbing, naked bride while I questioned every life decision that led to this point

After cutting the cake and "feeding each other with s**t-stained fingers", the planner then whisks the bride away to the service tent and washes her down with a tub of clean water.

"She walked in to find me in dish gloves and a poncho, like American Psycho," the planner joked. "I was sponging down a sobbing, naked bride while I questioned every life decision that led to this point."

Describing it was "the most disgusting thing" she has ever dealt with, the planner revealed that the diarrhoea had "spread in a thin layer across the bride's whole body".

Having sent the bride back out to enjoy the reception, the planner tossed the soiled shapewear and "scrubbed down the [£12,000] wedding gown in a plastic basin."

She added: "The inner lining was a loss and I cut it out completely." 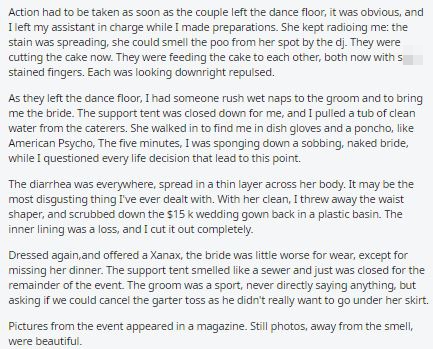 Although the groom had his suspicions but "never directly said anything", the planner added: "The support tent smelled like a sewer and was closed for the remainder of the event."

In fact, the lavish wedding was so extravagant that  it was featured in a glossy magazine.

The woman concluded: "Still, photos – away from that smell – were beautiful."

Needless to say, other user users were astounded by the story – and labelled the wedding planner a total "hero".

One replied: "An actual s**t show. I have no words. You're the MVP for sure."

Another added: "This perfectly illustrates why you NEVER deviate from your normal routine before a big event."

For more wedding horror stories, this Bridezilla has been roasted after boasting she won't provide booze, food or a DJ for her 150 wedding guests – despite spending £1,000 on her dress.

And this farmer proposed to his girlfriend by putting a diamond ring of a cow's teat – and it's left people horrified.

Plus a bride has slammed her groom's parents after they BOTH wore white on her wedding day.