A FUTURE bride has been blasted for her "ridiculous" list of rules for her wedding guests which include "no phones" and "pace yourself when drinking".

The bride-to-be shared the very strict list on Facebook and asked if she'd "forgotten any", but got slammed for treating her guests like "kids" or "inmates". 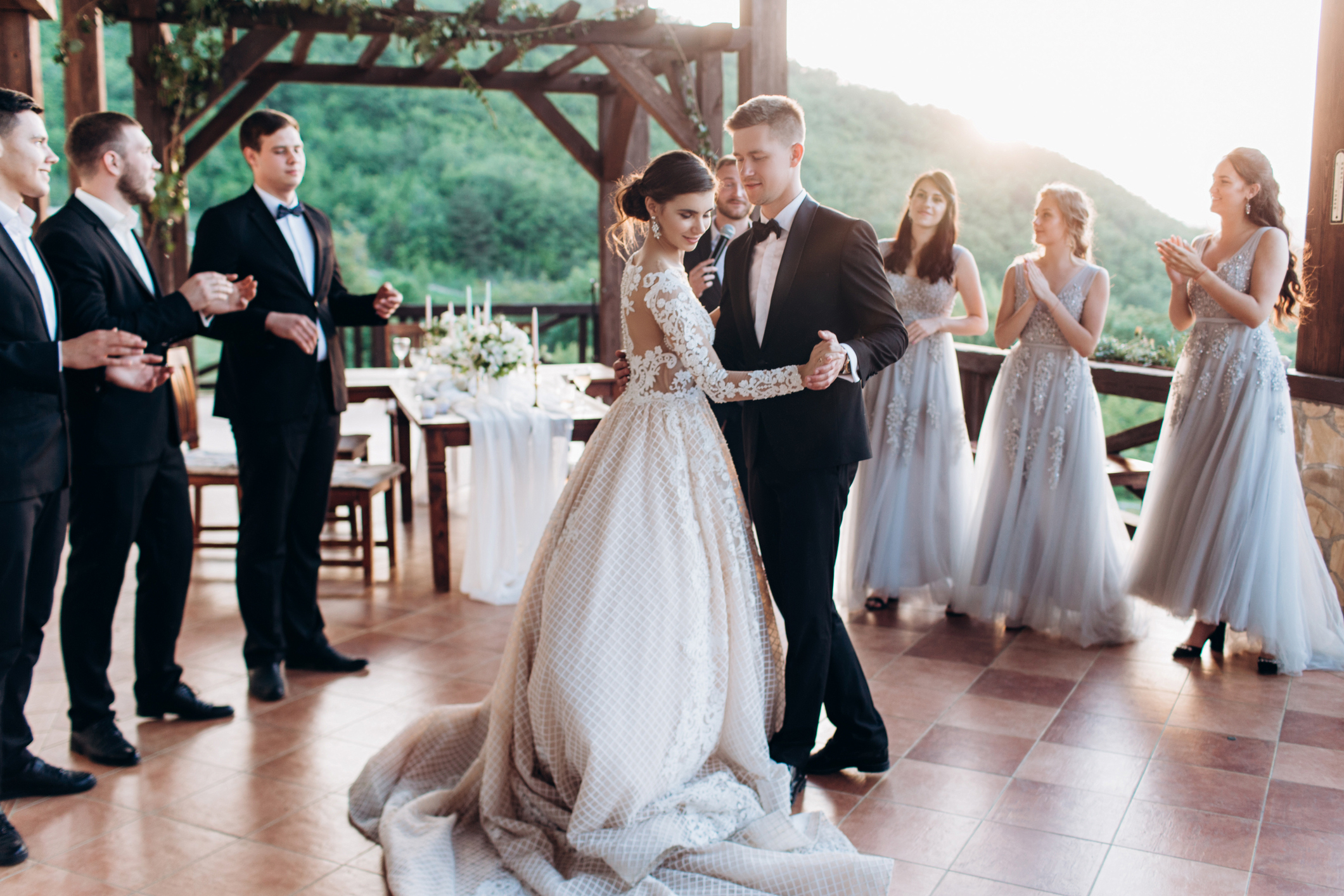 The whole list has 11 rules in total which she plans on sending out with the wedding invitations.

Other rules include "no nit-picking", "no rushing anyone", "don't wear white", "don't show up late" and "don't get in the photographer's way."

Rather than suggesting more rules to "add", many people dubbed the idea "rude" and suggested she find a "more polite way of doing this".

One person said: "Surely there is a more polite way of doing this? This is rude. They are guests, not inmates. Surely people know? It's common sense… If you need to give your guests rules then I think you're inviting the wrong kind of people." 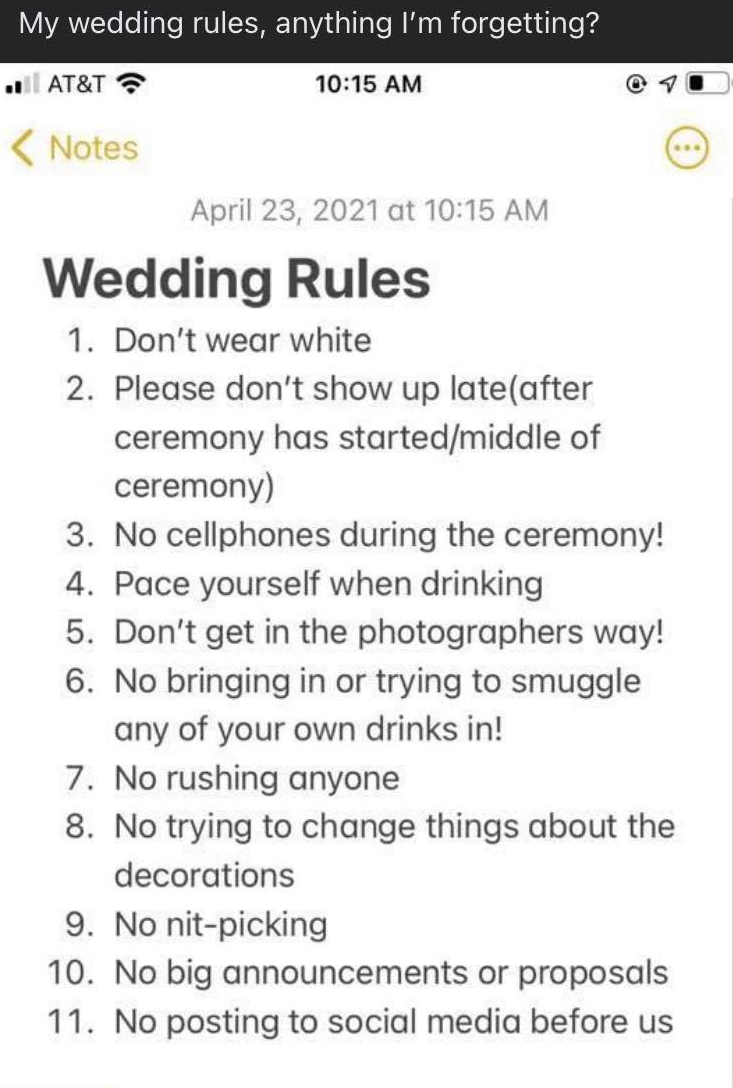 But the "bridezilla" defended her list of rules insisting that her mother-in-law is a "controlling and narcissistic person" who "needs rules".

It quickly became apparent that the rules were put in place for her fiancé's mother, with many suggesting she go to her privately instead.

"If most of those rules are directed at your fiancé's mum, I would talk to her directly if you're that concerned. Addressing all the guests with these blanket rules seems like overkill," one wrote.

But the bride said "she's not one to just 'talk to'" and that the list is absolutely necessary.

She stuck by her decision to provide all wedding guests with the list of strict rules saying that she didn't "care" what everyone thought because it was her wedding day, not anyone else's. 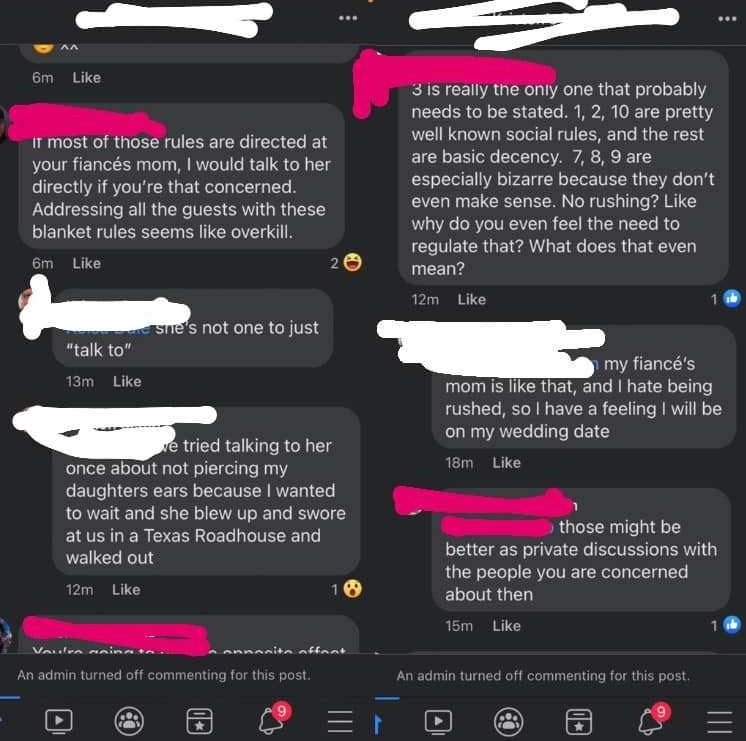 "The issue isn't the rules, it's the way your way of displaying them," one person hit back.

"Have your fiancé talk to his damn mother and stop treating the rest of your guests like children. Have the 'no phones' on a sign as people walk in…," said another. "Don't hand people a set of rules like they are in school. This has bridezilla written all over it."

It wasn't all bad though as some actually agreed that the rules are "necessary" and "fair".

"I agree with all of them and I don't actually think it's put rudely either. They were written plainly and without flowery language but that doesn't make them rude, it's just neutral," one wrote. 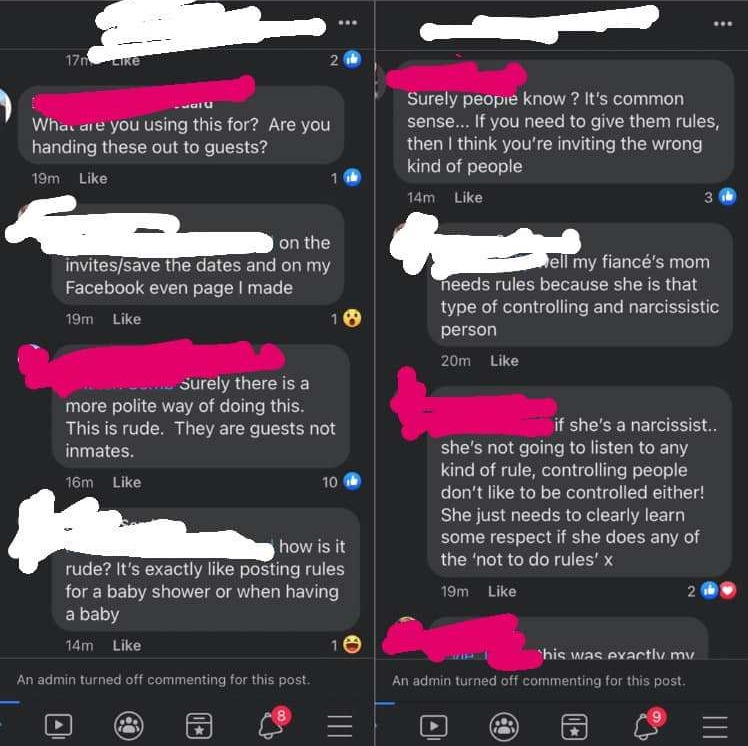 Another said: "I honestly don't see anything wrong with these beyond maybe changing it to 'wedding etiquette'"

Another person agreed that the rules weren't rude at all and that it's "unfortunate" that some people do "need to be told these things".

Many said the bride's rules were "common sense" but some disagreed, particularly a photographer who said they've witnessed many guests in the past making the wedding "about themselves".

Many agreed with the photographer, with one saying: "In all honesty though, while most of it is common sense, not everyone has that common sense."

Meanwhile, a bride’s parents spark outrage after demanding she has fish at her wedding as they’re paying – even though she’s ALLERGIC.

We also shared the horrifying video of the moment mother-in-law attempts to take the bride's place at the altar & she wore white too.

And a bride sparks outrage by demanding step-daughter, nine, wears shapewear to her wedding because ‘nothing fits her’