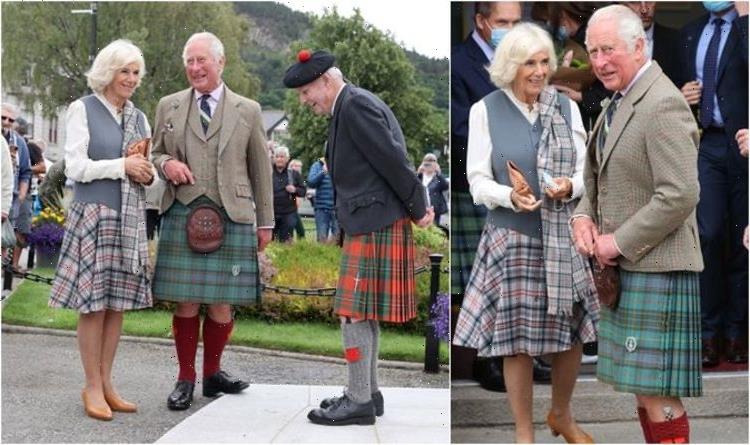 The Prince of Wales and the Duchess of Cornwall unveiled a plaque to commemorate the opening of Ballater Community & Heritage Hub a year ago today. This community hub is located in Ballater, Aberdeenshire, where the royal couple were carrying out royal engagements as the Duke and Duchess of Rothesay, as they are known in Scotland. Camilla wore a very unique tartan dress whilst visiting the local shops and businesses, in a touching nod to the nation.

The Duchess wore a chic tartan dress that featured a stunning grey waistcoat on top.

The 74-year-old wore her hair in her signature bouffant style and neutral makeup which highlighted her lovely features.

A royal fan on Twitter wrote: “So great to see them, they look fantastic and so happy.

The tartan dress was black, grey and red in colour, which was knee-length and covered in an elegant cream blouse and grey waistcoat.

She complemented the dress with a matching shawl and caramel-coloured shoes.

At the Heritage Hub, the royal couple unveiled the plaque and looked around the newly renovated kitchen.

During their visit, the pair took a look at the art exhibition, which is taking place in the Hub.

Prince Charles was also in full tartan as he visited the community centre in Aberdeenshire.

The Prince of Wales, 72, donned his favoured Balmoral tartan, with a tweed blazer.

The tartan colours were green and blue for Prince Charles’ checked kilt, and he also wore a brown leather sporran for the public outing.

Along with his smart tweed blazer, waistcoat and white shirt, the Prince of Wales finished his look with some maroon socks and black brogues.

Later the couple strolled around the village, stopping to visit Cambus O’May Suspension Bridge which is back in action following a repair project.

The couple both seemed to be in jovial spirits.

Charles and Camilla also enjoyed a royal walkabout around the Scottish village, chatting to locals, including a pet dog who seemed to love the royal couple.

The Ballater centre supports the community and social outcomes for people living in the Royal Deeside region.

Following the unveiling of the official plaque, the couple headed into the village to speak to local business owners.

Well-wishers greeted the pair and they stopped to chat to an employee at Shorty’s, an ice cream parlour in the centre.

Prince Charles has been wearing the Balmoral tartan since his early childhood, with photos showing him sporting it on his seventh birthday in 1955.

Earlier this month, the Prince of Wales wore this same outfit to visit Dunrobin Castle, one of Scotland’s great houses.

Today marks 25 years since the Princess of Wales was killed in a Paris car crash on August 31, 1997.

On July 1 last year, Princes William and Harry unveiled a statue in the gardens of Kensington Palace in their mother’s memory.