Camilla Franks fronted the audience at her closing show at Mercedes Benz Fashion Week on Thursday, a week after she revealed she was undergoing treatment for breast cancer.

The show, inspired by her travels to Japan last year, included a Japanese harp orchestra, drums, a full-size blossom tree and the walls of the Carriageworks space covered in fabric featuring her prints. 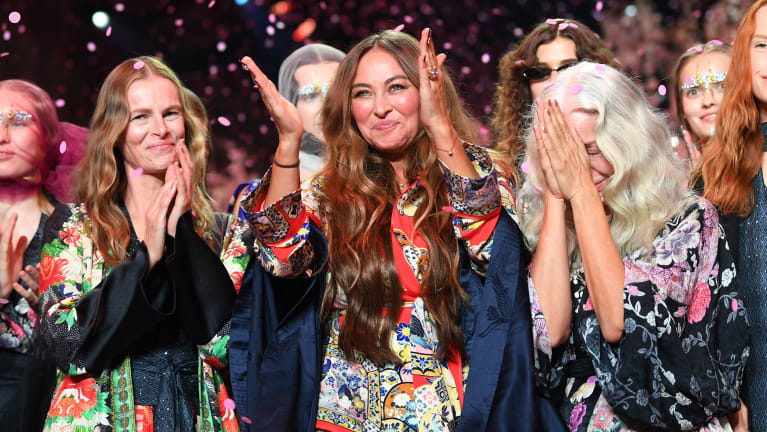 The parade was always going to be high on emotion given Franks' recent diagnosis, with the designer only confirming her appearance via a representative a few hours before show time.

Franks, 42, announced last week that she had just been diagnosed with breast cancer, a mere four months after giving birth to her first child, Luna Gypsy.

“I start on this journey humble but resilient; I would be lying if I said I wasn’t scared but I am fearlessly determined to do whatever it takes by focusing on my body, mind and spirit as I take my first trusting steps towards recovery," Franks said last week in a note to her staff.

Luna was at the show on Thursday, along with Franks' partner, Welsh musician JP Jones, his mother, who flew out from Wales, and other family and close friends.

During the finale, Camilla led a group of children through the runway, receiving a standing ovation from the crowd, which included top fashion editors and buyers, celebrities and top customers from her "tribe".

The collection, called "The Girl I Was, The Woman I am", includes more structured pieces than previous seasons and prints ranging from purple-hued cherry blossom, to bold oranges and reds.

Camilla's next collection will be based on her travels last month around Australia, including to the Daintree and Broome.

The show closed out five days of runways at the 2018 event, which launched on Sunday with a show by Camilla and Marc. Highlights of the week included a presentation by Emilia Wickstead for Matchesfashion.com at Wylie's Baths at Coogee, and this morning's Ten Pieces parade at Bondi Icebergs.

The reporter travelled to Sydney as a guest of IMG.