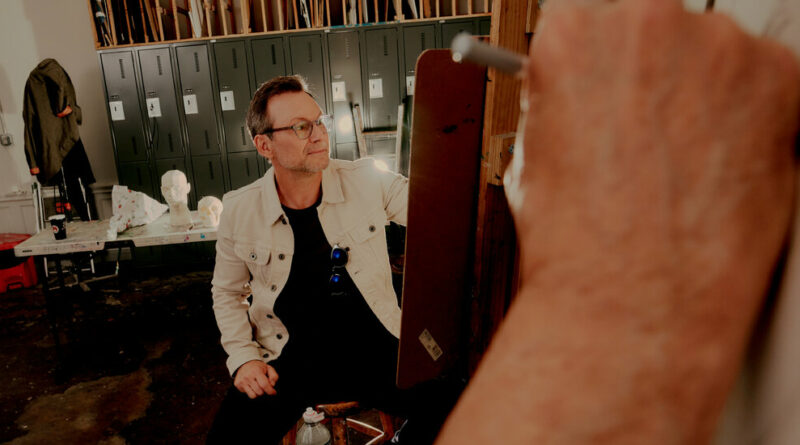 John Varriano, an instructor at the Art Students League, stood behind Christian Slater’s easel, studying the lines that the 51-year-old actor had sketched. “You have chops, man,” Mr. Varriano said. “You have got to keep practicing, man.”

On a steamy June morning, Mr. Slater, spruce in a white denim jacket, black slacks and green sneakers, had arrived at the art school’s home in Midtown Manhattan for a still-life tutorial.

A movie star from the 1980s and ’90s — “Heathers,” “True Romance,” “Pump Up the Volume” — Mr. Slater now wears glasses and his stubble has gone gray. Behind those glasses, his eyes still have that signature twinkle — a twinkle like a floodlight — that made him crush material for misunderstood girls everywhere. When he chatted with Mr. Varriano about New York City in the 1970s or Matisse’s paper cuts, that daredevil grin surfaced, too.

Back when he lived in New York, Mr. Slater wandered into the art school for the occasional drawing class. He began to pursue visual art more seriously a few years ago, at the suggestion of his wife, Brittany Lopez, who signed him up for art classes (watercolors and pastels) at Fairchild Tropical Botanic Garden, near their Miami home.

“I was in between jobs and my wife was like, ‘You’ve got to do something,’” Mr. Slater said, his voice like finely milled gravel. “And I loved it. It’s great. It’s definitely meditative and relaxing.” He has to do something creative on a regular basis, he said, “or else I’ll lose my mind.”

Mr. Slater never quite lost his mind, between jobs or during them, but he did have a wobbly decade or two, when the bad-boy roles he booked bled into his daily life. “You travel down certain roads,” he said. “And you realize that maybe those aren’t the roads that you want to continue to travel.”

So Mr. Slater chose other ones. He got sober 16 years ago. (When Mr. Varriano offered beer, at 11 a.m., Mr. Slater politely declined, asking for a water.) He divorced and remarried and again became a father. After years of taking whatever parts he could get (“I was working a lot but, spending a lot of time in places like Bulgaria,” he said), he is now experiencing something of a career Renaissance, thanks to his Golden Globe-winning turn on “Mr. Robot.”

“I’m at a place of such utter gratitude to have people interested in hiring me again,” he said.

For his latest project, he has traded a bad-boy role for a good-guy one in “Dr. Death,” a limited series on Peacock based on a true-crime podcast. Mr. Slater stars as Randall Kirby, a vascular surgeon who drives a sports car, loves opera and wears flashy surgical wraps. When he discovers that a neurosurgeon, Christopher Duntsch (Joshua Jackson), has maimed several patients, he fights to expose him.

In the paint-scarred studio, Mr. Varriano presented various options for a still life. “The flowers maybe?” Mr. Slater said, pointing at a bouquet. “Give that a go?”

After arranging the flowers atop a wooden block, Mr. Varriano added a curly-haired bust to the tableau and handed Mr. Slater an assortment of charcoal sticks.

With a swooping motion, Mr. Slater laid down his first line. “That’s it,” Mr. Varriano said. “The first one is always the hardest. Well, actually the second, third, fourth and fifth are equally hard.” 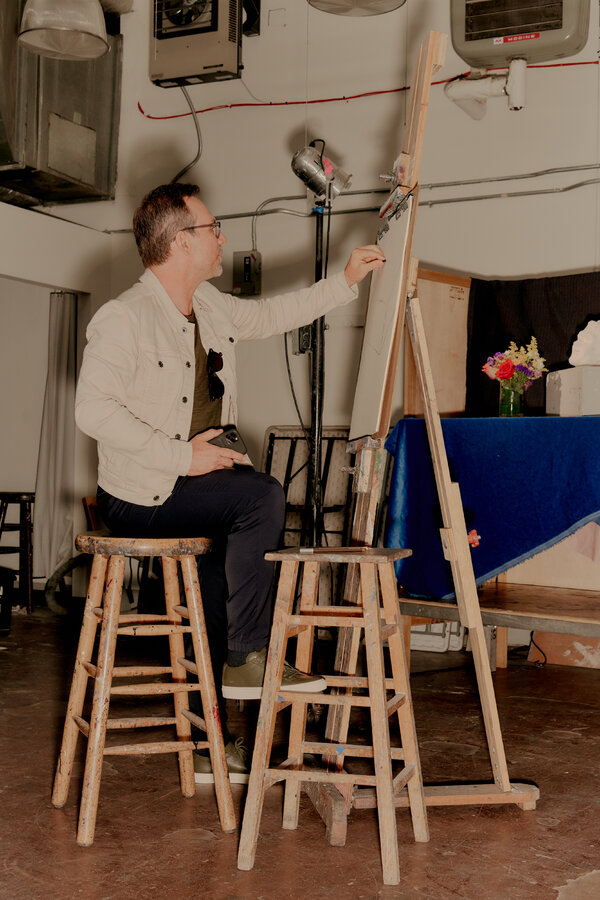 He observed that Mr. Slater drew with his left hand (“A southpaw, I wouldn’t box him”) and gently encouraged him to rethink a few angles. Then he stepped back. “I’m not saying a word,” Mr. Varriano said. “No, no, just roll, man. Just keep rolling. Make believe no one’s in the room.”

Mr. Slater laughed. “Draw like nobody’s watching,” he said, smudging a line with his middle finger.

Mr. Slater sketched for 10 minutes or so. He adjusted the angles of the block and made a first pass at the spherical shape of the head. He then took a break to show Mr. Varriano some of his early work. He pulled out his phone to show his version of Matisse’s “Bather” rendered in blue painter’s tape, then Michelangelo’s “Pieta” drawn with pencils, and a sketch of his wife in charcoal. “She hates this one, he said.­

Mr. Varriano didn’t. “That’s actually really good,” he said. “I’m not just saying that. I can understand why she wouldn’t like it. But so what?”

The phone disappeared back into a pocket, and Mr. Slate returned his focus to the bust. The head began to take shape, the brow ridge, the nose, the ears, the curls. He drew with quick, precise strokes, squinting, chin thrust forward, a half-smile ghosting his face.

“I’m wiping and drawing and having a grand old time,” he said. He added that he was renovating an apartment nearby, “so I can start to come more often.”

Mr. Varriano approved. “You’ll go down the rabbit hole like the rest of us,” he said cheerfully. “You’ll ruin your life.”

Mr. Slater thought that was a fine idea. The hour zipped past. Mr. Slater never made it to the flowers. He seemed pleased with what he had accomplished, though he left his sketch clipped to the easel. Until the next time.