A COUPLE have revealed how they gave their dingy bedroom an upgrade using cheap wood panelling, and it looks like a posh hotel.

Husband and wife team Scott and Gemma Ramsey created the navy blue diamond design behind their bed for just £50 and it took them just four days to complete. 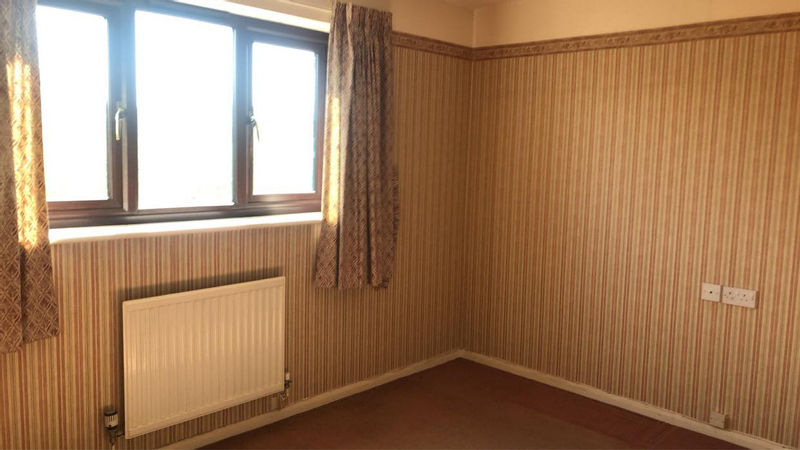 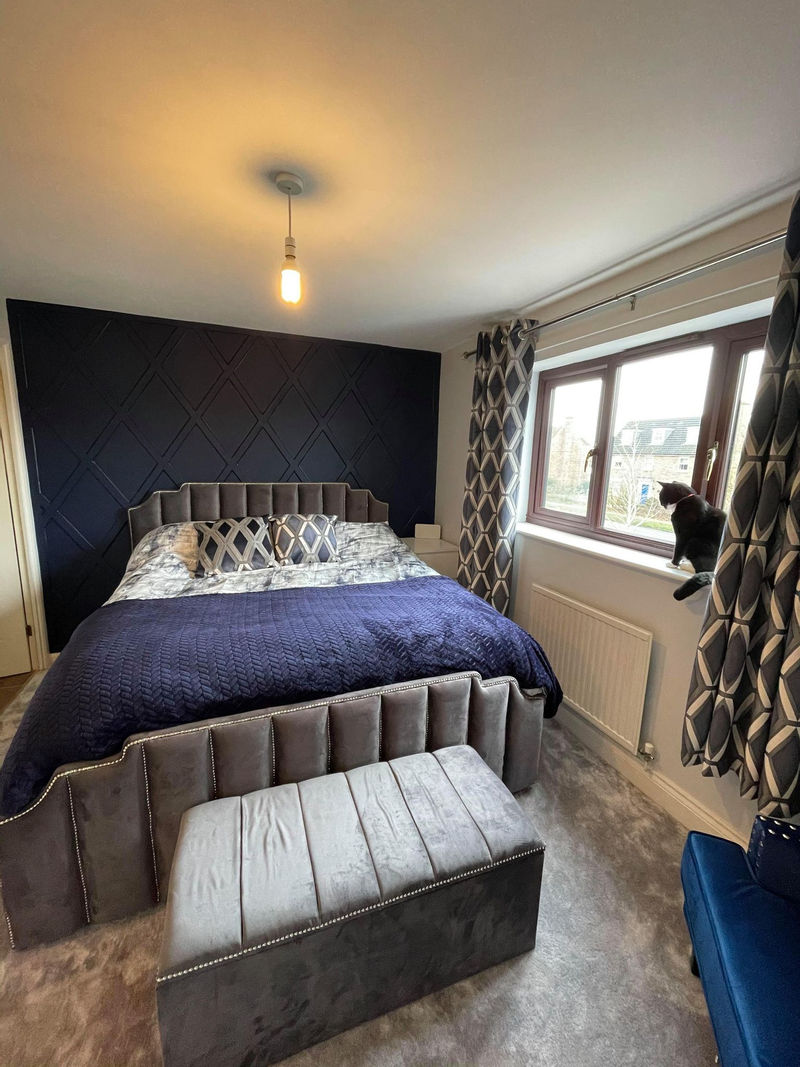 “The panelling was super cheap to create and I’ve been told it looks like a boutique hotel room,” says Gemma, 29,who lives with her husband Scott, 33, and two children in Ipswich.

The posh panelling is the standout feature of the master bedroom, which was completely gutted in preparation for the luxury revamp.

“We moved into our new home in September,” Gemma told money-saving community LatestDeals.co.uk.

“We call it our ‘project home’ as it was very dated and needed a revamp. The décor was stuck in the 1990s.” 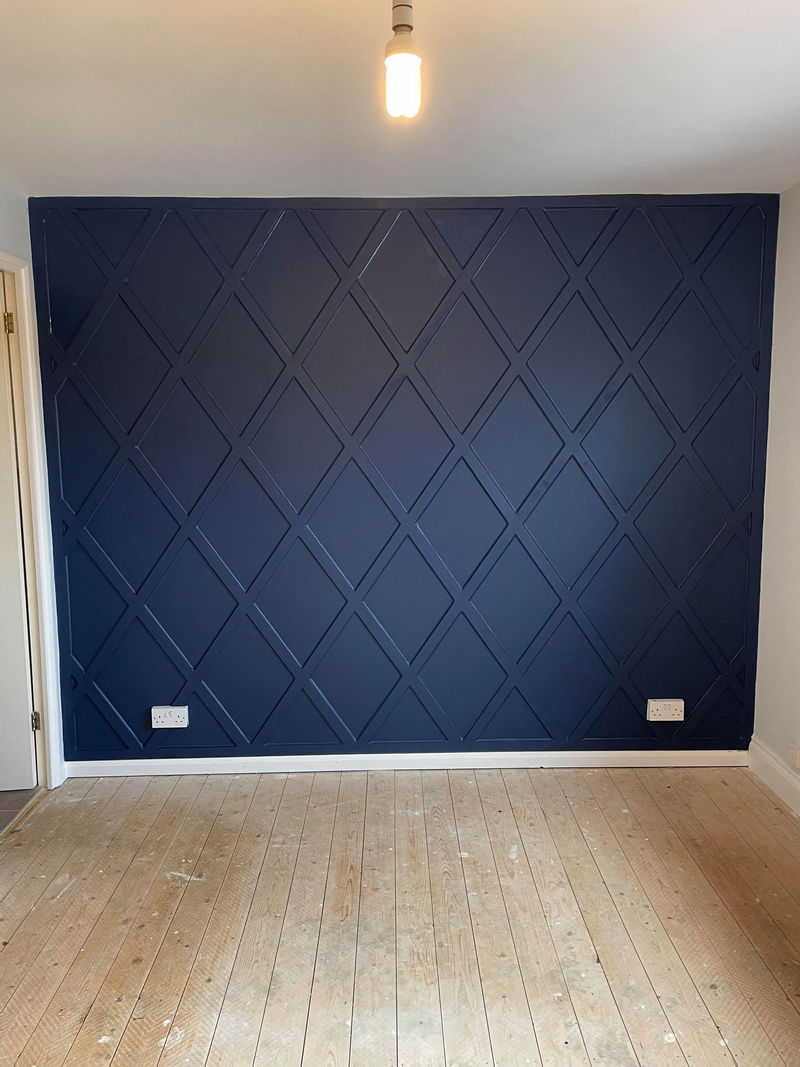 The couple was so eager to get started that they knocked through a wall on their second night in the property.

“We’re planning a single storey extension so we wanted to complete the upstairs first, as that wasn’t changing structurally,” says Gemma. “I wanted it to be somewhere I would be able to escape from the mayhem downstairs when the building work begins.

“As our children now have their own bedrooms, we wanted to make the whole of the upstairs more modern, starting with the master bedroom.”

Gemma’s vision for the room came from falling in love with a plush cushion: the Luxe Cut Velvet Geo Cushion in Navy, £30 from Next. 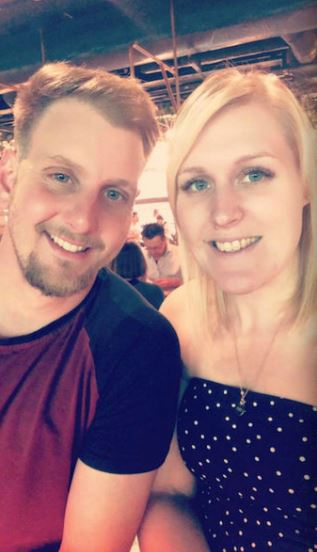 “I loved it. Plus, there were matching curtains available too,” she says. “I’d never bought such expensive curtains before. At £205 I thought they cost loads, but I figured they would last. Plus, this was a house we were making into a home.

Gemma was a fan of the wall panelling trend but was keen to put her own spin on it.

“I wondered if we could adapt the popular square and rectangle designs into a diamond style design to match the cushion and the curtains,” she says.

With some clever thinking, involving some rather complex mathematics, Scott turned Gemma’s vision into a reality.

“Scott is very handy when it comes to DIY,” she says. “He was a roof tiler by trade and he’s made a few things around the house, including a great window seat. He just has a natural flair for it.” 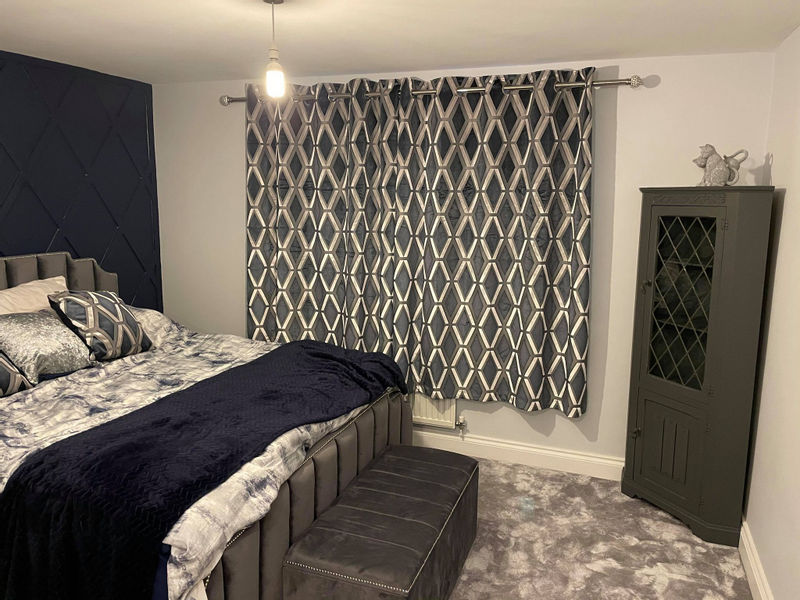 Scott bought some 4×2 strips of wood for £30 from Wickes and had them cut to size so they were 10mm thick and 2” wide. He then set about figuring out the angles for the diamond pattern. After measuring and marking up the wall, he was able to start piecing it together.

“The maths involved in working out the measurements was a bit tricky – especially working around all the plug sockets,” she says. “Once he’d worked it all out and cut the pattern, however, the job was foolproof.

“He focused on doing one full and complete diagonal length of the design first, using long strips of wood to go from the floor to the ceiling,” says Gemma. “He then cut smaller pieces of wood to fill in the gaps and create the opposite slant of the diamond shapes.”

Scott also added a strip all the way around the wall to frame the design feature. All the wood strips were affixed to the wall using a heavy-duty glue. Once this had dried, it was ready to paint. 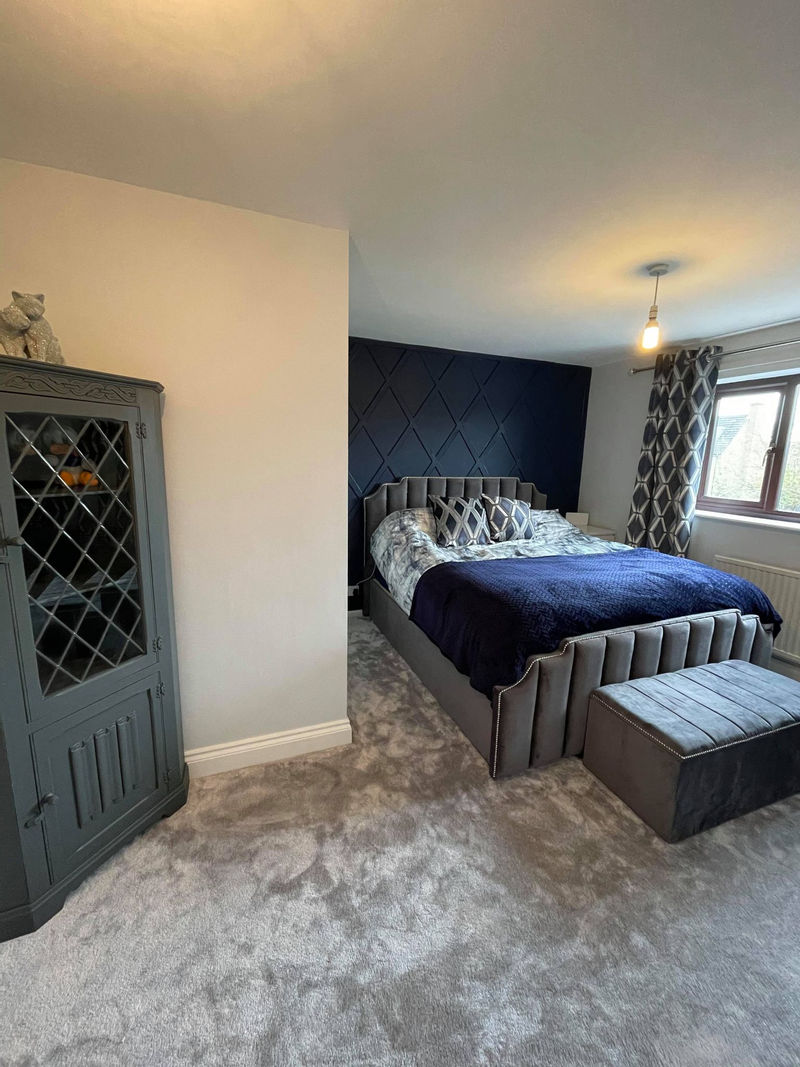 “As the cushions and curtains were navy and silver, I was searching for ages for the right blue paint to use on the feature wall,” says Gemma.

“A local store is a Frenchic stockist so I popped along and they had painted a cabinet in a shade called Hornblower, which was displayed alongside a chest of drawers that were painted a silvery grey. It was a great combination so I knew I’d found the perfect shade in Hornblower.”

Gemma bought two 750ml tins for £19.95 each but ended up just using one full tin and the “smallest bit” from the second.

“The painting was taxing, as it was awkward having to get in-between all the wood and making sure it was well covered,” she says.

Three coats and two days later, allowing time to dry, the work was complete. Next came the furniture and accessories.

“My bed was from a Facebook company I stumbled across called Rachel’s Bed’s,” says Gemma.

“The bed linen was also from Next and I also got a new carpet, an accent chair and a blanket box. The corner cabinet was my late father’s and it ties in perfectly with the diamond pattern on the glass. In total I spent just under £1,500 on the furniture and accessories, not including the panelling.”

Tom Church, Co-Founder of LatestDeals.co.uk says: “Wall panelling can be created on a very modest budget and there are lots of ways that you can adapt it to suit you.

“It’s a great value way to make a feature wall – especially when you consider the cost of wallpaper as an alternative.

“Ask your local DIY store if they are happy to cut the strips to size for you. This handy service will save you both time and money.”

In other DIY news, a woman who couldn't afford a £180 mirror transforms a plain one for £2.

Plus this mum created a Mrs Hinch-inspired kitchen using £28 Amazon sticky wrap after being quoted £7k for a renovation.