Home » Fashion » Danniella Westbrook on her crazy car-crash life of sex, drugs, operations and soaps — and how she has left it all behind

But after “years of putting crap in my body” she says she has cleaned up her act for good. 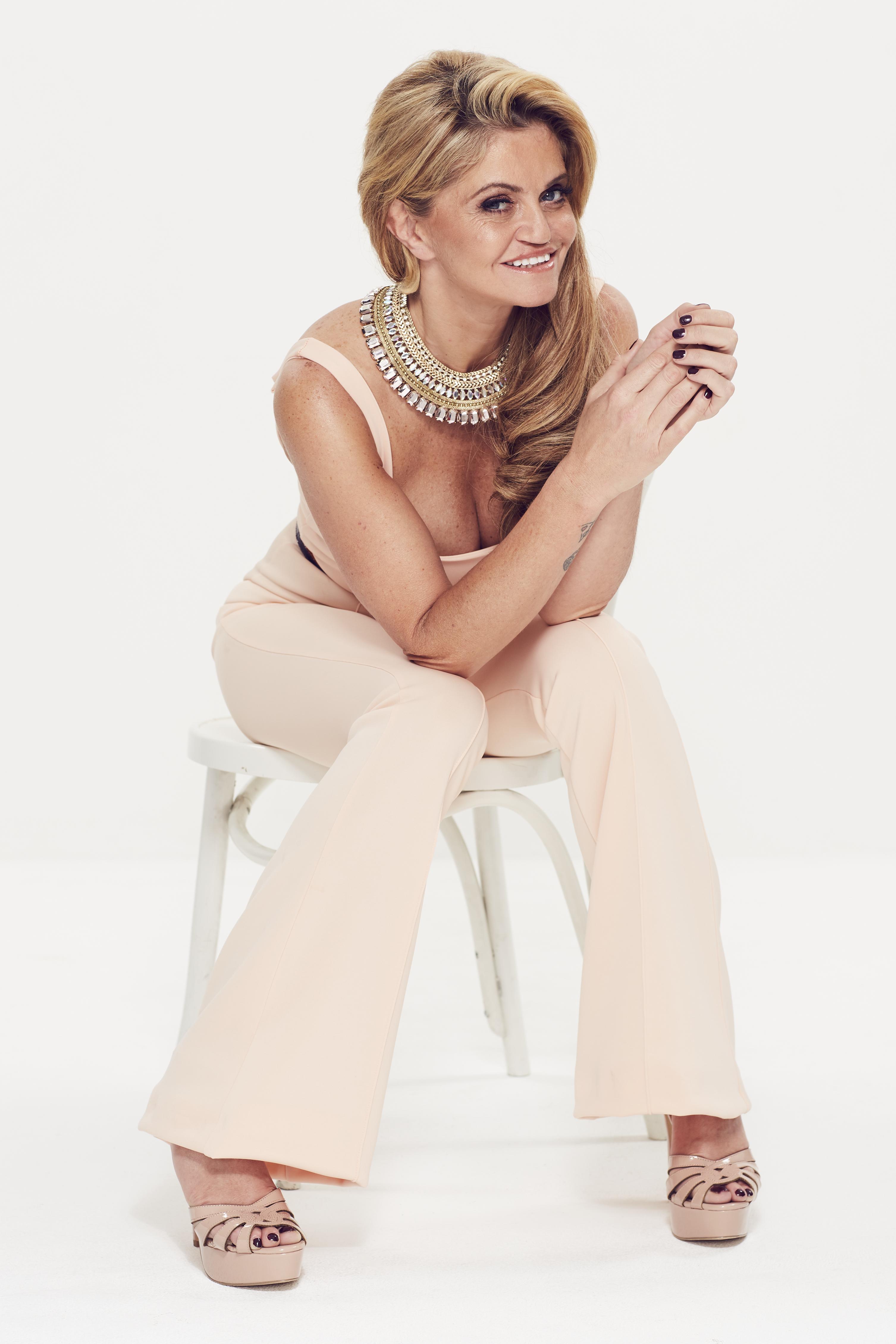 In fact, noting her past life as a cocaine addict, she says during our chat: “I’ve been here for two hours and I’ve not been to the toilet once.”

Although she has disappeared several times outside our East London studio for a cigarette, and shocked shoppers by going to buy more while wearing just a dressing gown.

The 44-year-old, who was last week pictured while out for a jog in just her bra and knickers, continues: “I’m in a good place. I’m boxing three times a week, running — yes, in my underwear because I get too hot — and practising yoga.

“I’ve been so healthy recently. I’m eating lots of eggs, greens and coloured fruit, because that’s where you get your antioxidants from.” 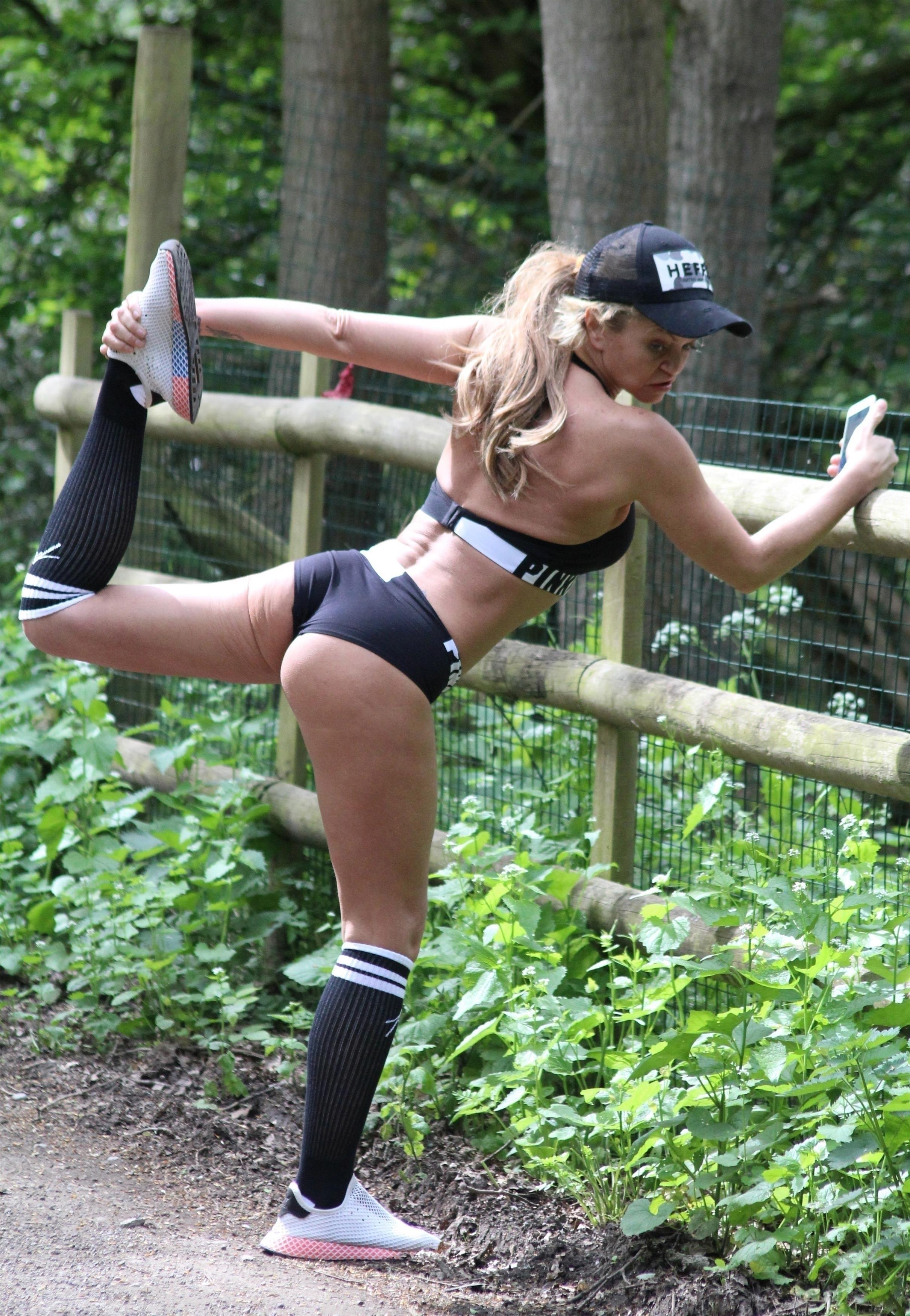 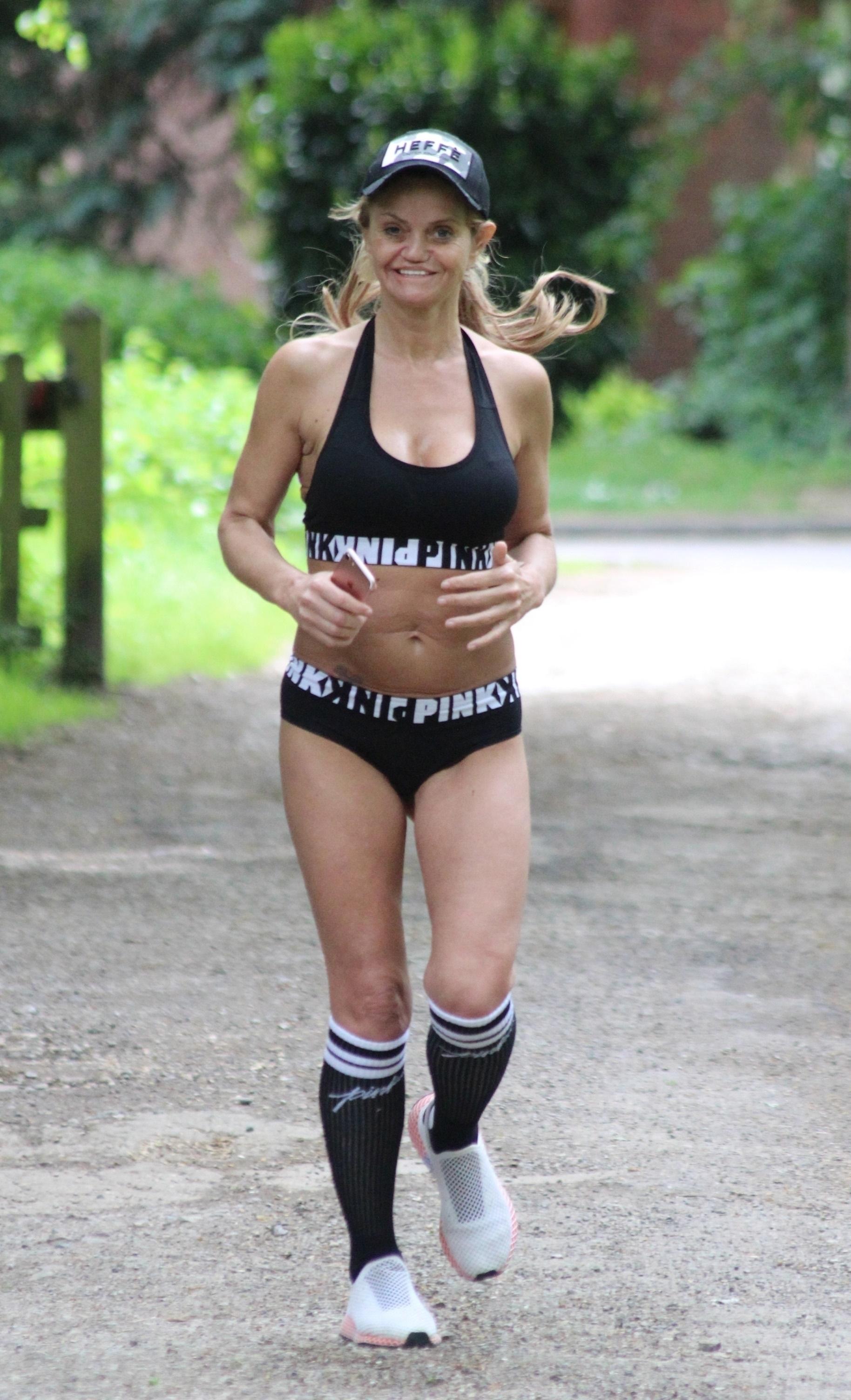 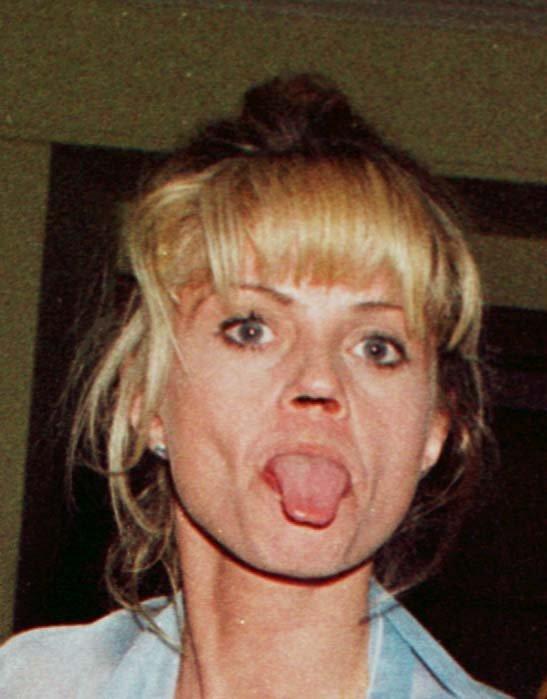 The former EastEnders actress declared last week that doctors were planning to use one of her ribs to replace her cheekbone and stop her face crumbling from osteoporosis.

She says: “It’s not ideal but I’m just looking forward to getting it done so I can move on with my life.

“The osteoporosis wasn’t due to cocaine, I would admit it if it was, as I never lied about my nose. It was caused by botched dental implants.”

Danniella then pulls down her lip and reveals black bolts in her mouth. 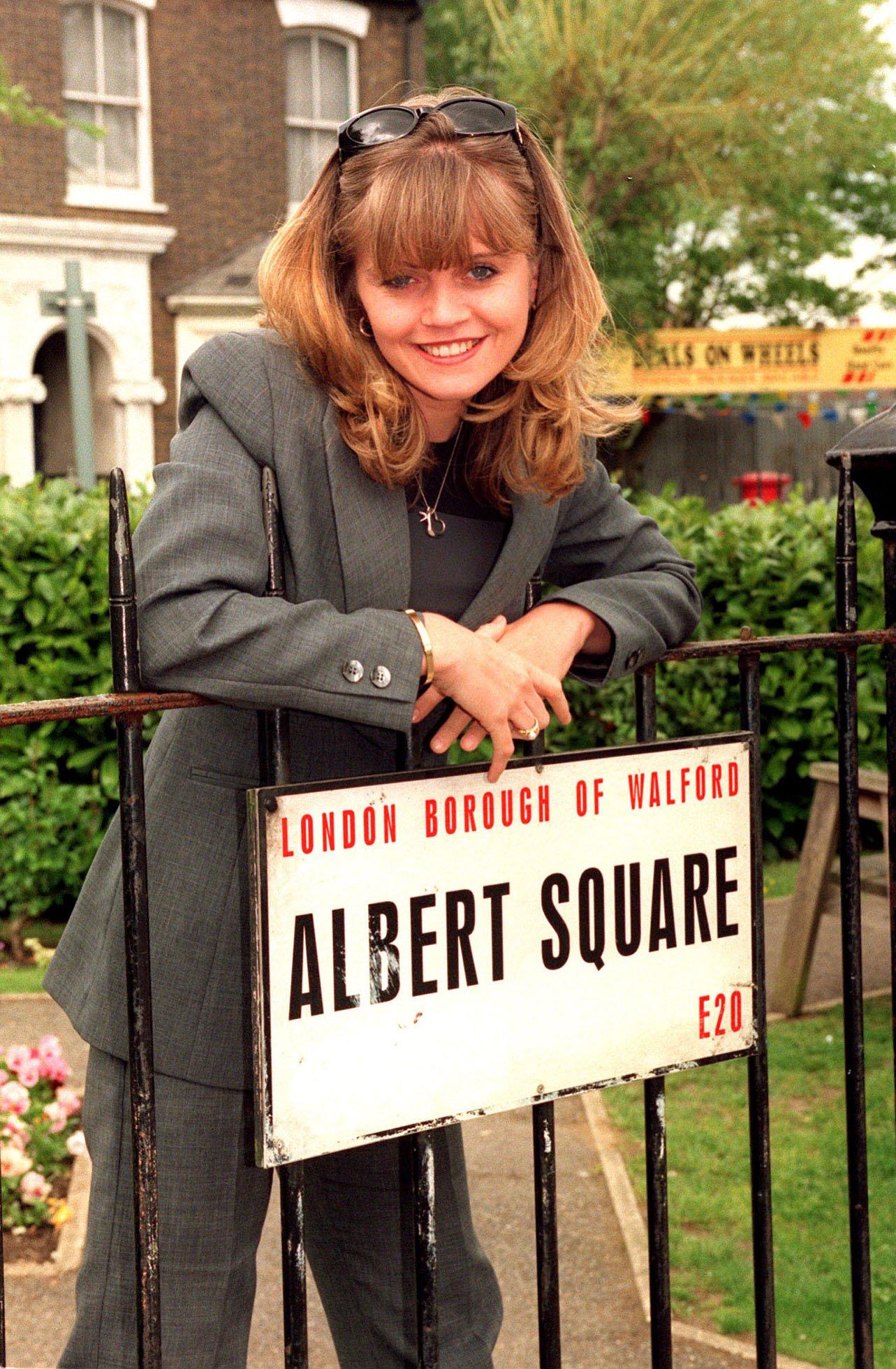 She says: “It’s so painful, I have dentures now.

“I went on Celebrity Botched Up Bodies in 2016 for dental implants after losing my teeth in a car crash.

“It was the worst decision I ever made and I’m hoping the new surgery can fix it. But it’s terrifying.

“Originally surgeons wanted to take bone from my skull to put in my cheek because it would be stronger, but I begged them to take it from my ribs. I am terrified. 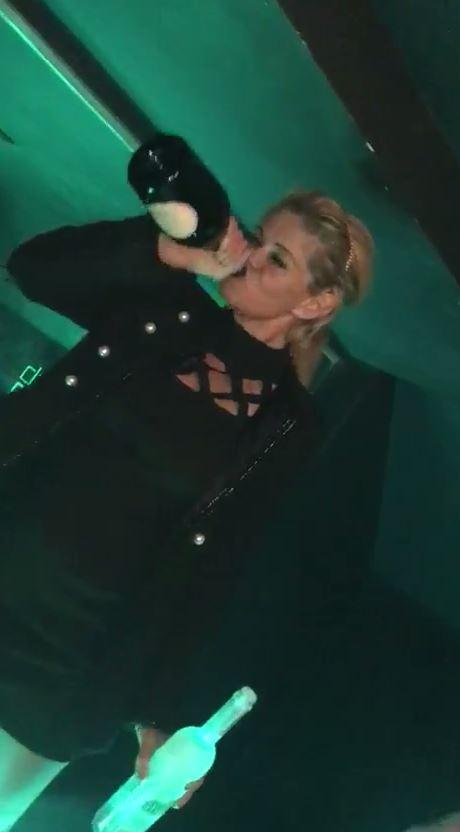 “I’ve had cosmetic surgery I haven’t needed, including seven boob jobs, an eye lift, a face lift, Botox and liposuction on my knees. I’d like to say that I wouldn’t have plastic surgery again in the future, but I probably would.”

In January last year Danniella admitted suffering a cocaine relapse to “numb the pain” following her appearance on the botched bodies show, which, she says: “I’m still suing. It’s been a long battle.”

But she denies reports from earlier this year that she begged a friend for cocaine on a break to Gran Canaria and, during a holiday in Spain, offered selfies for free drinks.

The mum of two says: “There’s a lot of rubbish printed about me, I have nothing to hide. 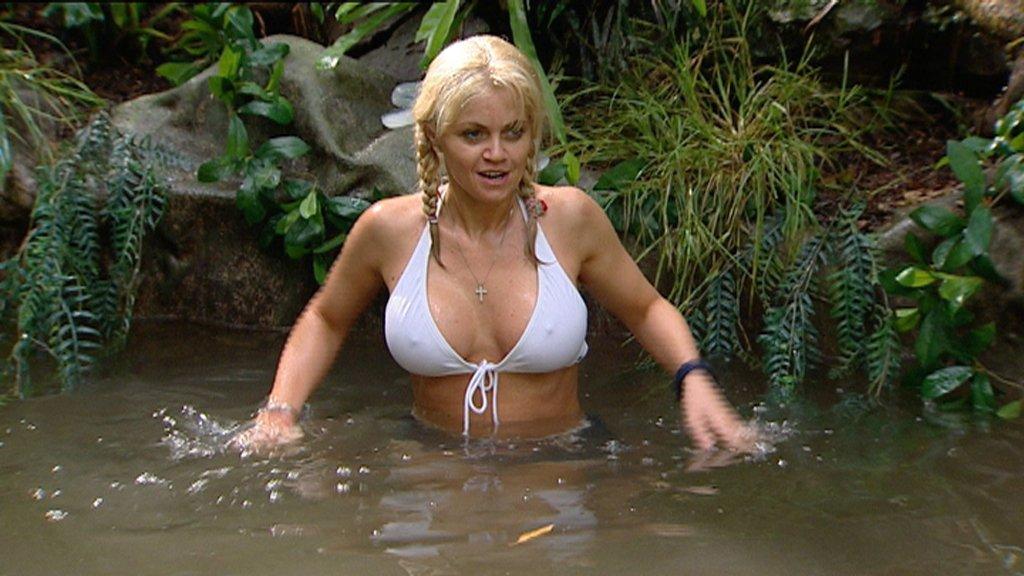 “I’ve relapsed, I’ve been on drugs but not for a long time.”

After walking on to Albert Square as Sam Mitchell for the first time in 1990, aged 16, Danniella was axed six years later over her drug problems.

She returned in 1999 but was sacked again in January 2000. The troubled actress was later pictured at the British Soap Awards with her septum missing.

She once admitted her cocaine habit was costing her £1,000 a week and that she had spent around £250,000 in total fuelling her addiction.

But as she beats one problem, it seems another is always waiting. Last month Danniella was arrested twice, once in the UK and once in Spain, over two separate offences.

Police here held her for “malicious and witness intimidation” amid claims she stole £10,000 from a former friend. She says: “It was terrifying. One minute I’m at Stansted Airport about to fly to Benidorm, the next I’m on the floor and armed police are screaming, ‘Police, drop your bags!’

“I couldn’t believe it, the one time I’m early for a flight then that happens. I spent 16 hours in custody. Police had my phone for six weeks but I’ve got it back after they found nothing on there.” 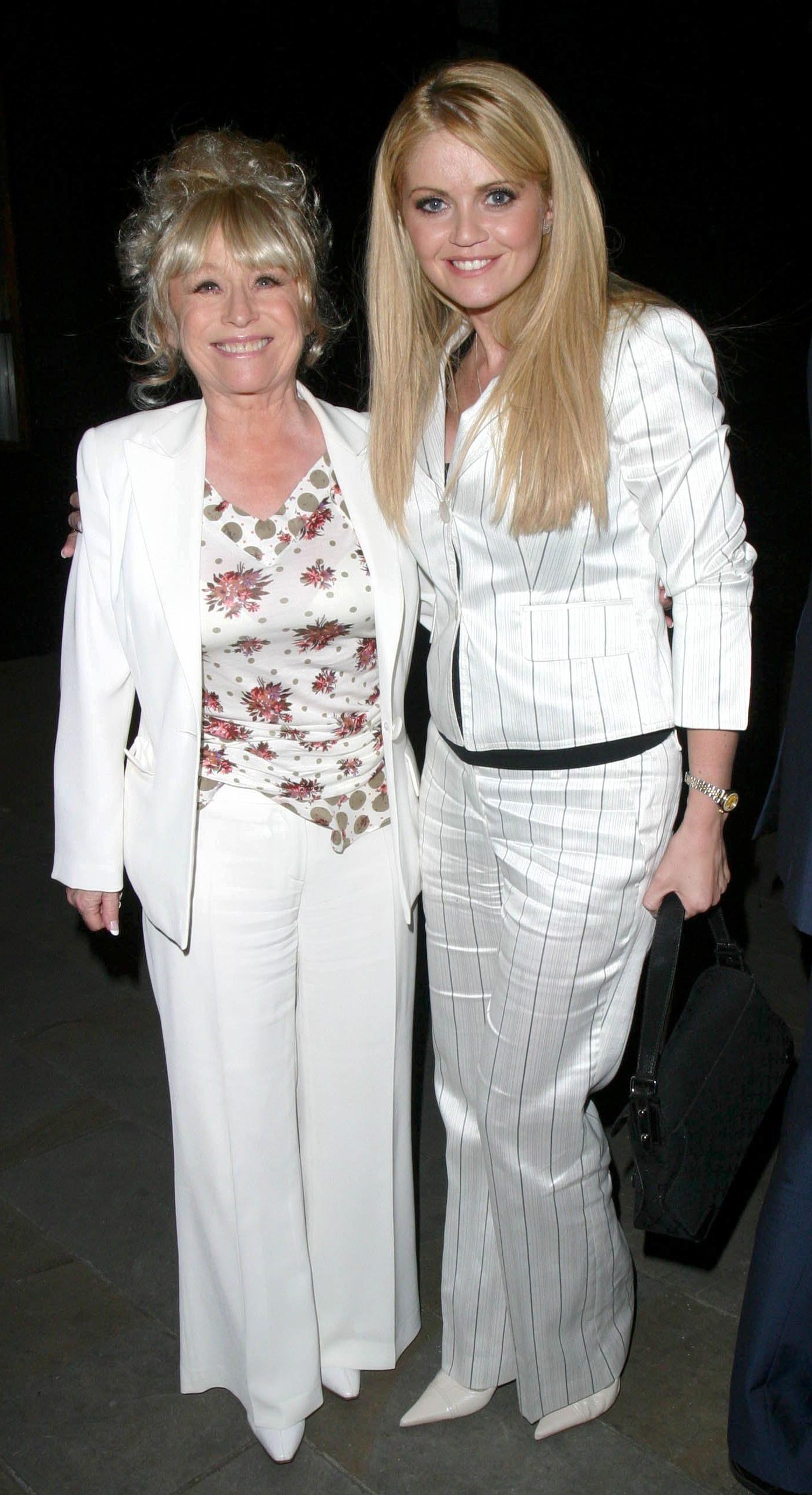 Last week the charges were dropped and she was pictured swigging champagne in an Essex nightclub and flashing her knickers to celebrate.

She also spent two-and-a-half days in a Spanish jail last month after she was arrested over an outstanding warrant in relation to an alleged driving offence.

She says: “It was over an unpaid petrol bill for 30 euros. I’d got robbed in Benidorm some days before and cancelled all my cards.

"So when I went to pay for the petrol I only had one card on me and it got declined. I gave them my driving licence with my address on so they could track me down for payment and didn’t think any more of it. 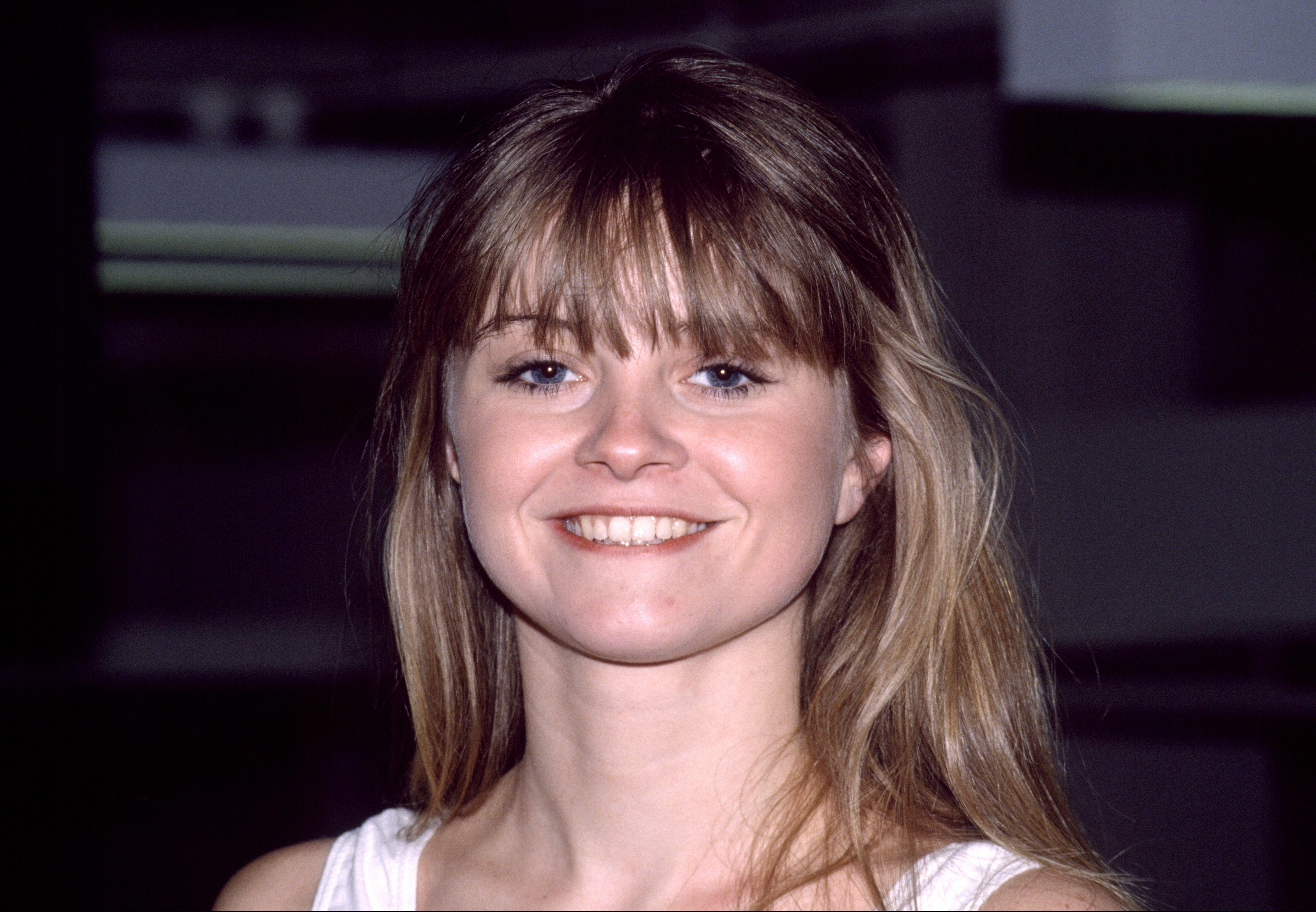 "Six months later I was arrested at the airport and charged with fraud. It wasn’t fraud really but they needed something to call it. It was terrifying in the jail.

"I had no water, no food and no toilet and I was in pitch darkness. All I could see was a tiny red light from the CCTV.”

It has not been an easy time few weeks for Danniella — but it is only when she recalls the moment last week that she found out about Barbara Windsor’s Alzheimer’s battle that she breaks down in tears.

The 80-year-old played her on-screen mum Peggy Mitchell in EastEnders. 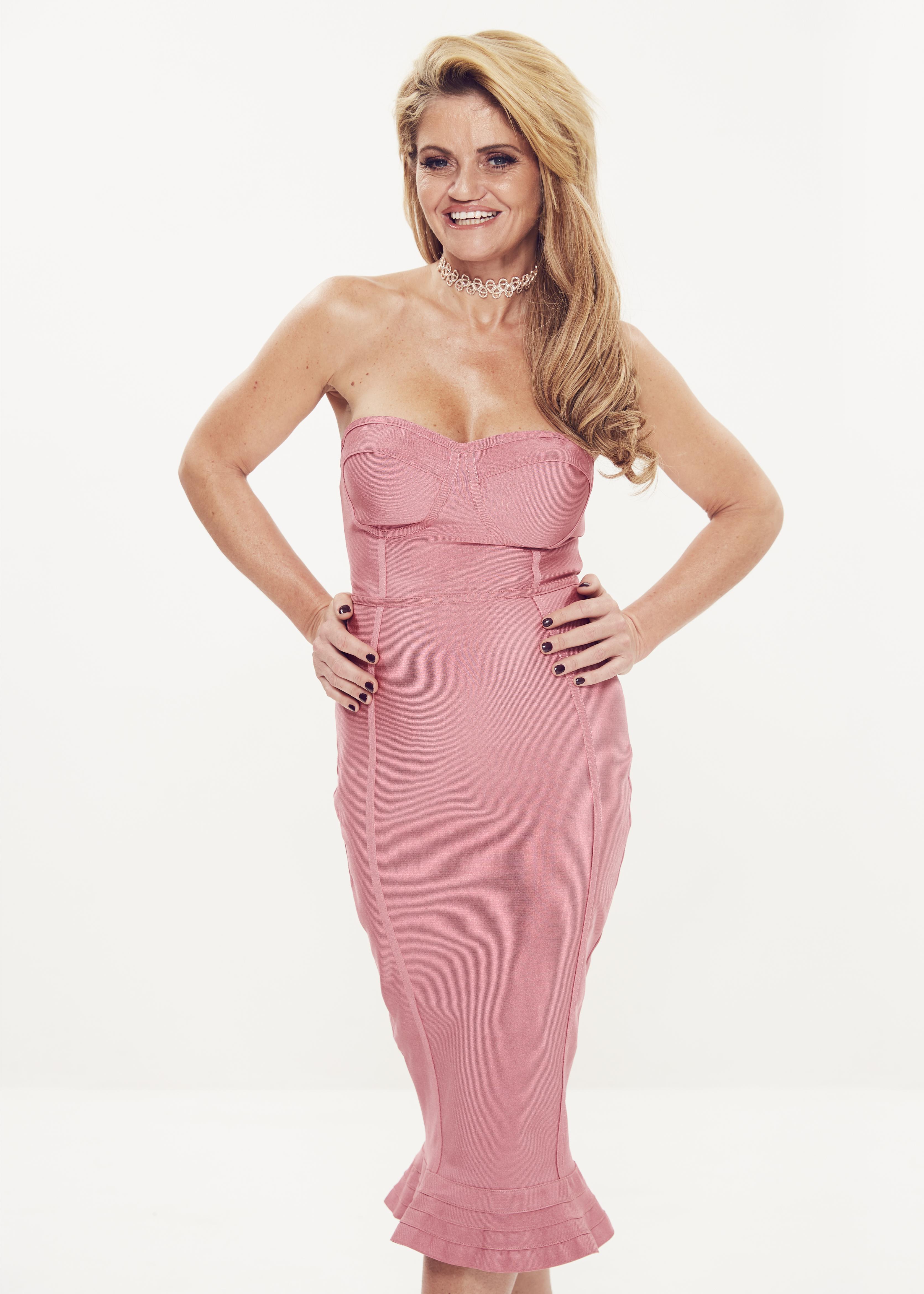 Danniella says: “I saw it on the front page of The Sun.

“This is a devastating illness but I’d rather that than the pain of cancer because at least she doesn’t know.

“Barbara is the button of life and remembers everybody. She has taught me so much.”

Danniella dropped a card into Babs earlier this week after husband Scott Mitchell, 55, spoke of his wife’s diagnosis. She adds the veteran actress inspires her “on and off” screen, saying: “Me and Barbara are so similar, we both love a toyboy.” 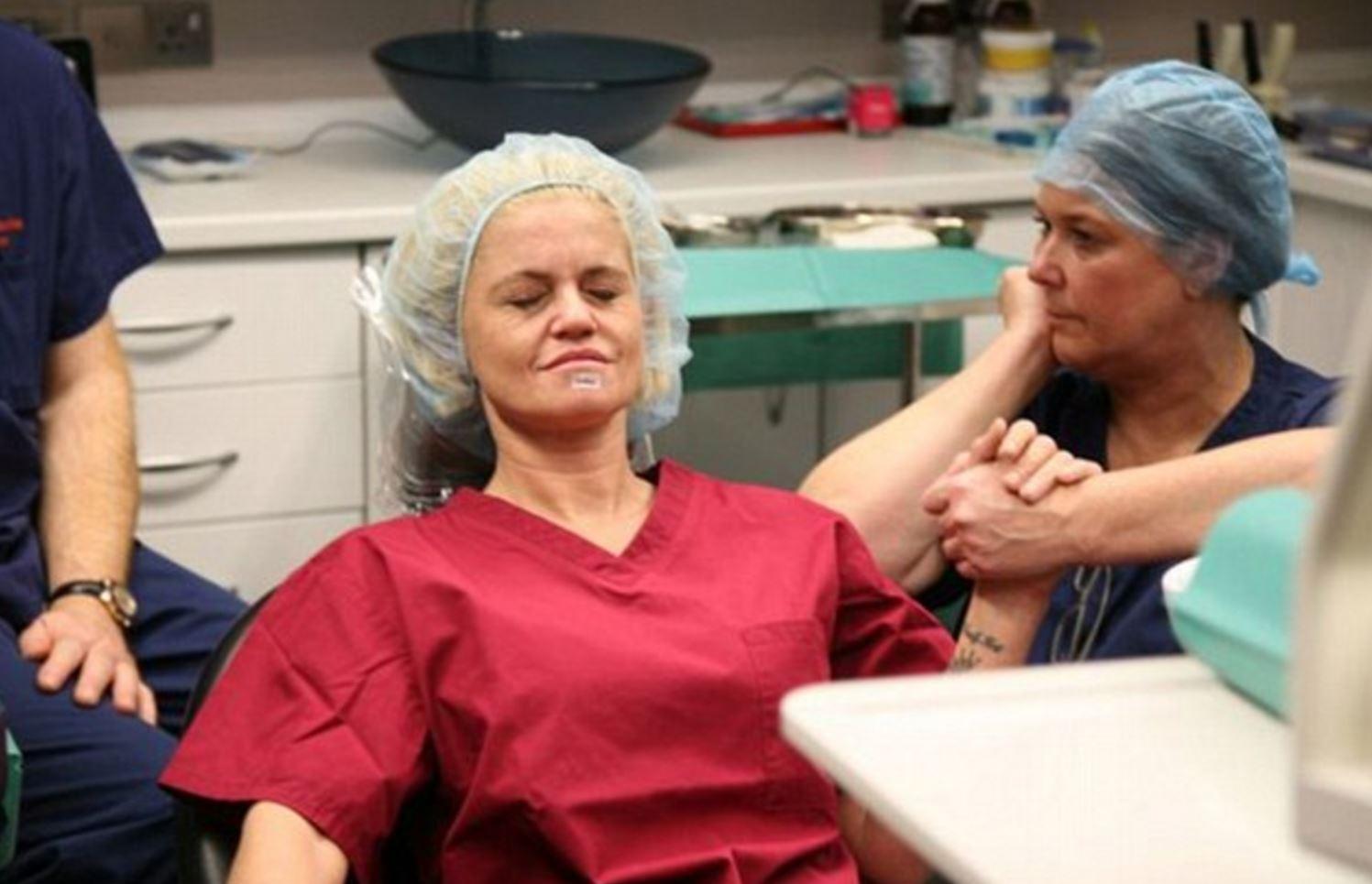 Danniella has children Kai, 21, from her romance with Robert Fernandez, and Jody, 16, by second husband Kevin Jenkins. She tells how ex-boyfriend George Arnold is still “the love of my life”, despite their 19-year age gap, and admits: “I never got over George. We don’t speak but I still love him.”

Danniella is in touch with former toyboy fiance Alan Thomason, 35, despite their relationship ending because “he liked partying and alcohol too much, and was a bad influence on me”.

Her luck with men has not improved much since. She says: “God it’s been so long since I had sex. The last time was with a guy in Spain in December.

“I’m on Bumble sometimes, swiping through potential guys, but I’ve not slept with anyone on there yet — although there is a guy I’ve got my eye on.”

It is hard not to feel sorry for Danniella. She goes on to describe how a stalker has plagued her life for years. She scrolls through dozens of sick messages from her alleged tormentor.

She says:“ A few weeks ago the stalker threatened to kill my kids and send them home in a box in small pieces.”

Admirably, Danniella, who appeared on I’m A Celeb in 2003, is determined to focus on positives in her life and is eyeing another return to EastEnders as Sam.

She is so focused on getting her old role back that she has adopted her fitness routine, but nearly “broke my arm” weightlifting last week. 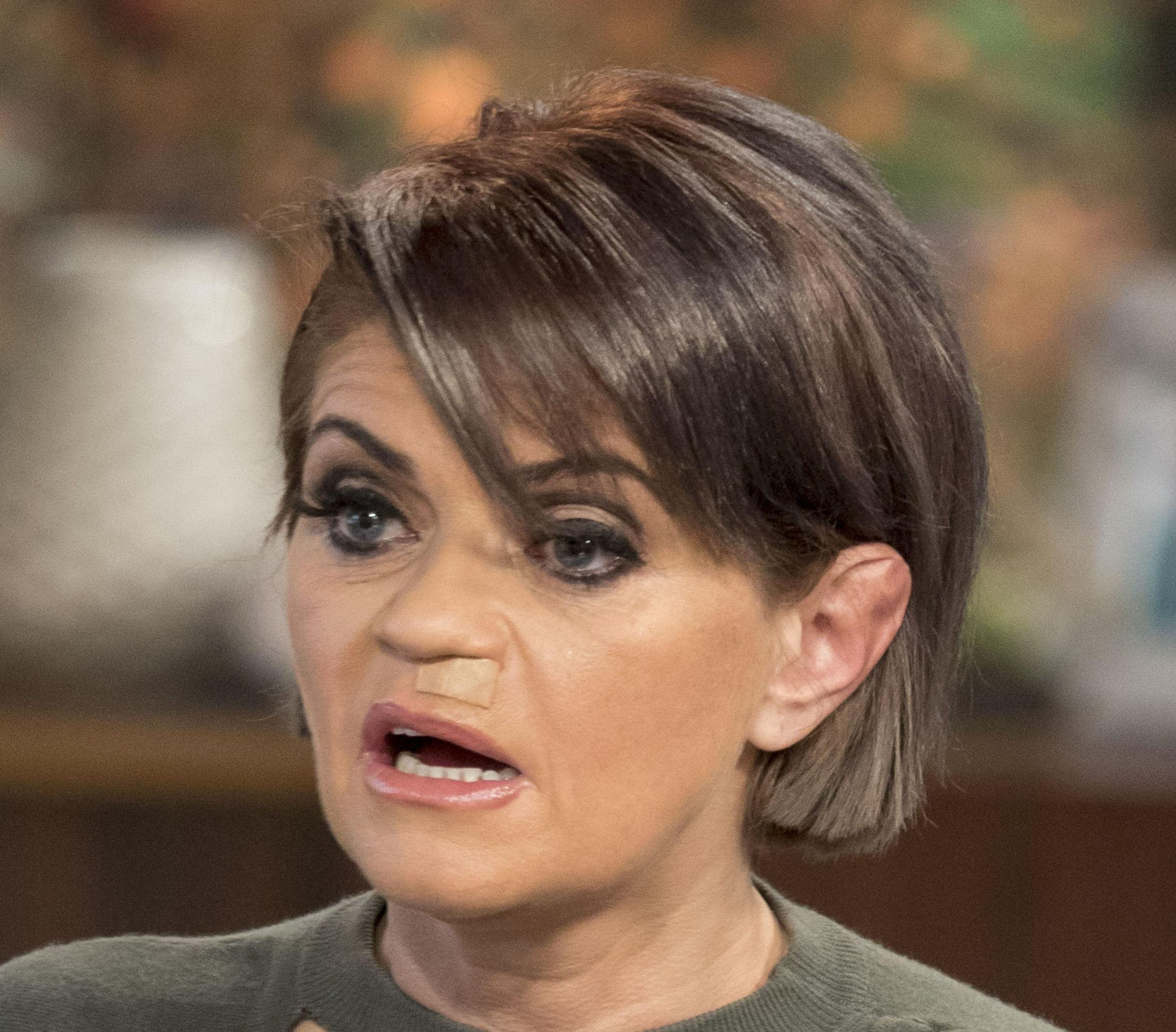 Wincing as she tries to take her injured arm out of her jacket, she says: “I’m doing 250 sit-ups in one session, and can hold a plank for eight minutes. I’m a size eight and I’m feeling amazing.”

Her hard work is paying off, as she shows off her taut tum while getting changed for our shoot.

Slipping into a cream jumpsuit and posing in front of the mirror, she recalls her soap days and says: “This is so Sam. I love that character — she’s a cow but she’s great.

“I’d love to get the chance to play her again and would love to do Strictly Come Dancing. But they haven’t asked me yet.”

Her arrests, surgery and love woes aside, Danniella insists she could not be happier.

She says: “I don’t need a man. I’ve got a new one-bedroom flat in Epping, Essex, and it’s just me by myself and I couldn’t be more excited. I can shut the door and walk around in my knickers.

“I don’t have to share the remote control or worry about the toilet seat being up. What more can a girl ask for?”