“Especially with my blonde hair. My body shape has completely changed, my skin, my wardrobe, everything. You do lose yourself a bit after having a baby and I wanted to feel sexy and good about myself again. I’m not just a mum. 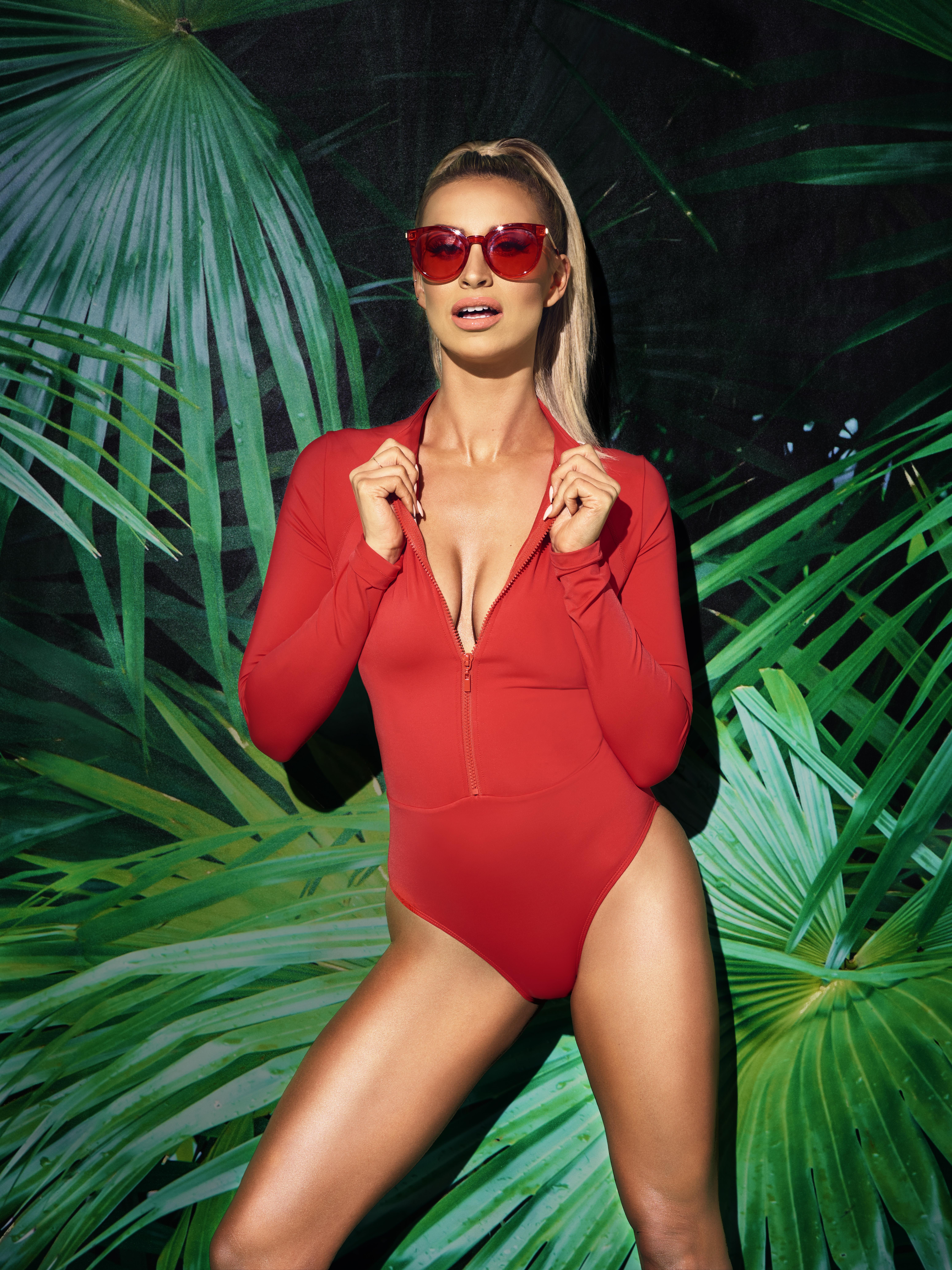 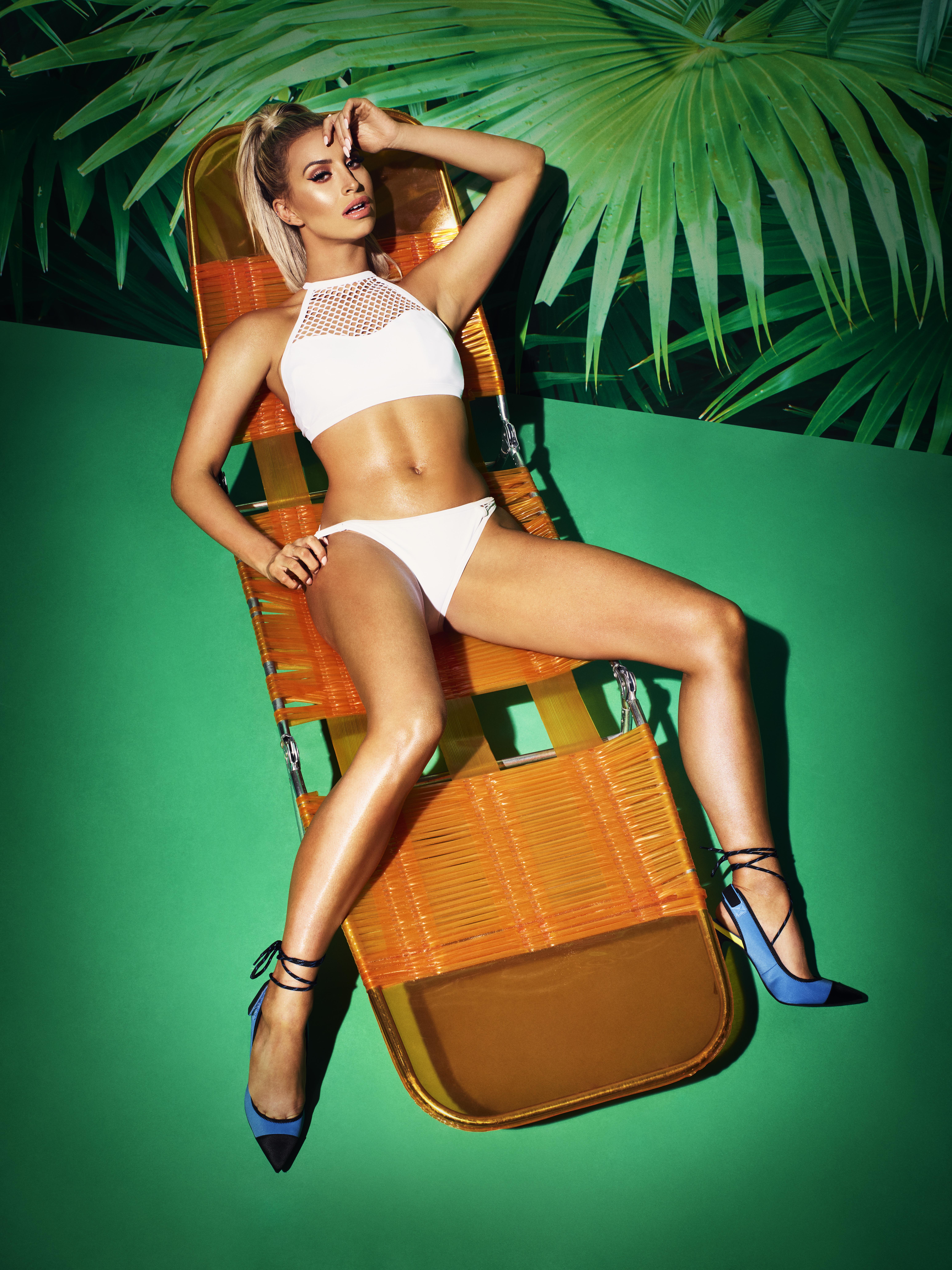 “I was a party girl, going out all the time, having fun with no responsibilities. I was carefree.

"And it’s not a bad thing that I’ve lost that – my life has just changed. It’s a new chapter and a completely different direction, and so with that has come a whole new image. I’m in the best shape I’ve ever been in my whole entire life.”

There’s no denying that Ferne looks astonishingly good, and is fitter and leaner than ever. From tomorrow in The Sun, readers can follow her 28-day diet and exercise plan to drop a dress size, tone up and get healthy in time for summer.

After a topsy-turvy relationship with her body over the years, she says she has finally learned to love it and has never felt more confident. That mental shift has been perhaps the biggest transformation of all. 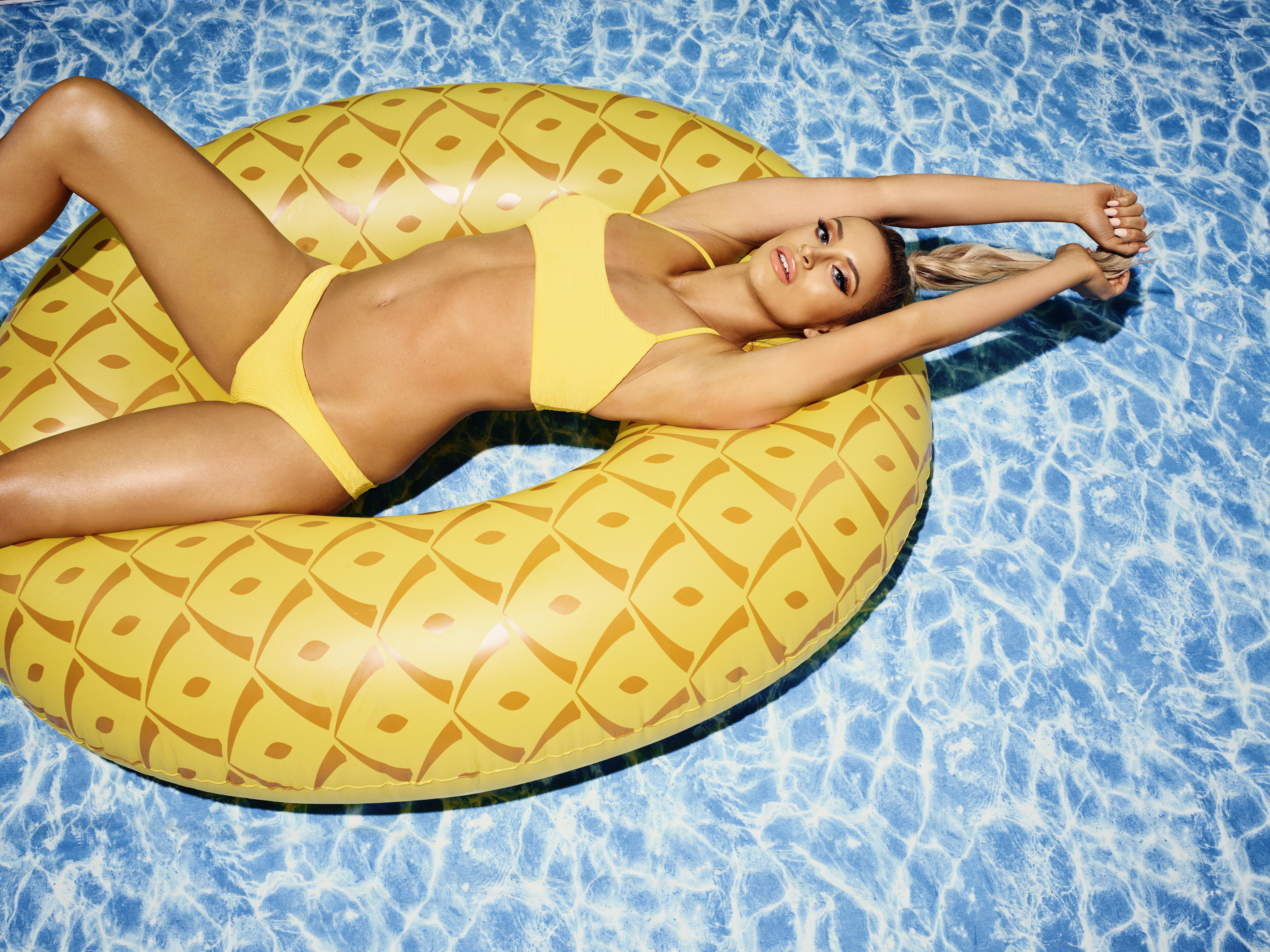 “The confidence I have in my body comes from having the utmost respect for it. Growing a human being inside of you is just insane. It’s such a blessing and a miracle what the female body is capable of.

“For me, this wasn’t so much about looking good as feeling good. Obviously I wanted to look good in a bikini but that’s not what drove me. And exercise has become my release, the one hour where I can totally focus on me, because you do need that space as a new mum.” 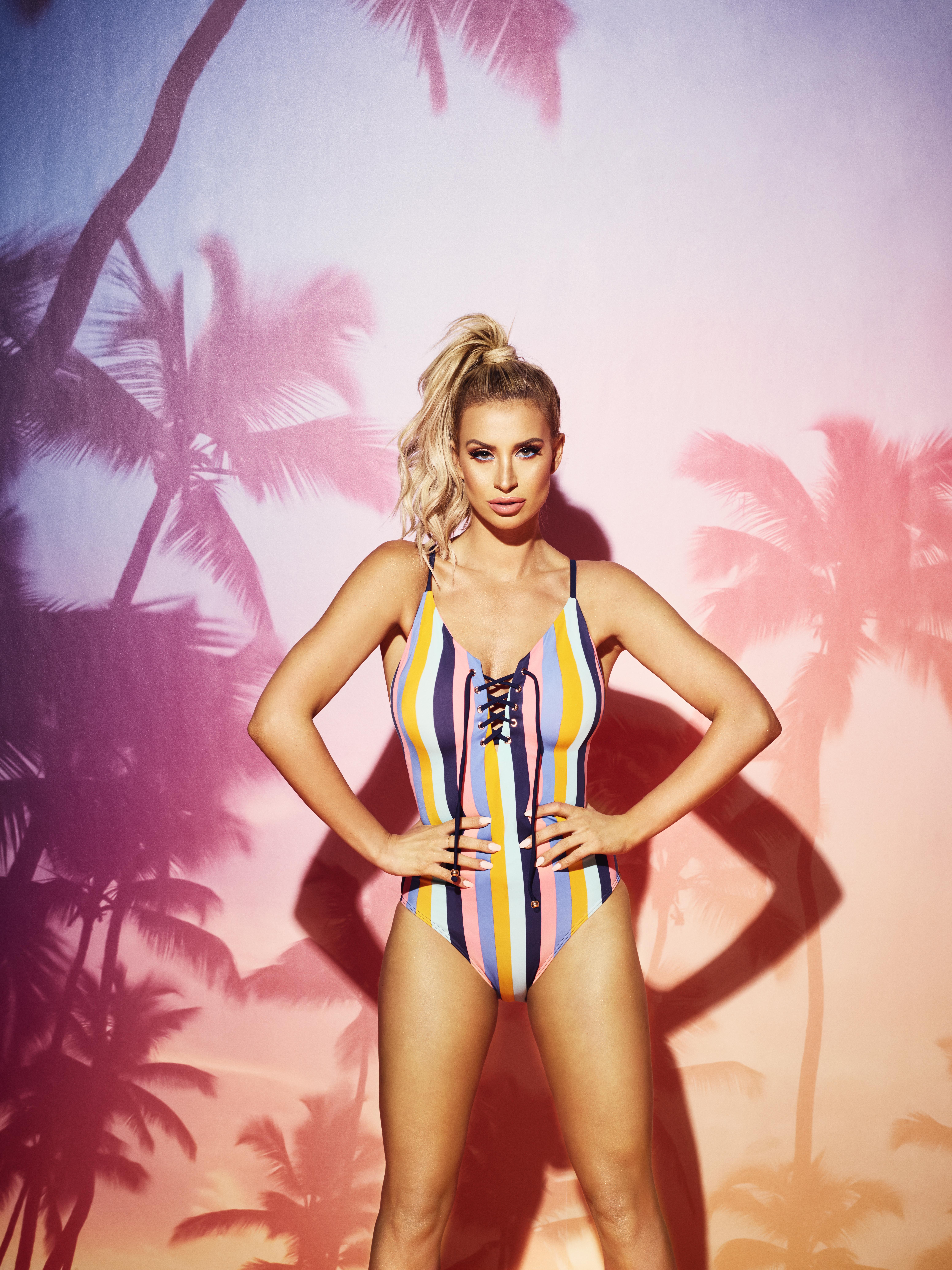 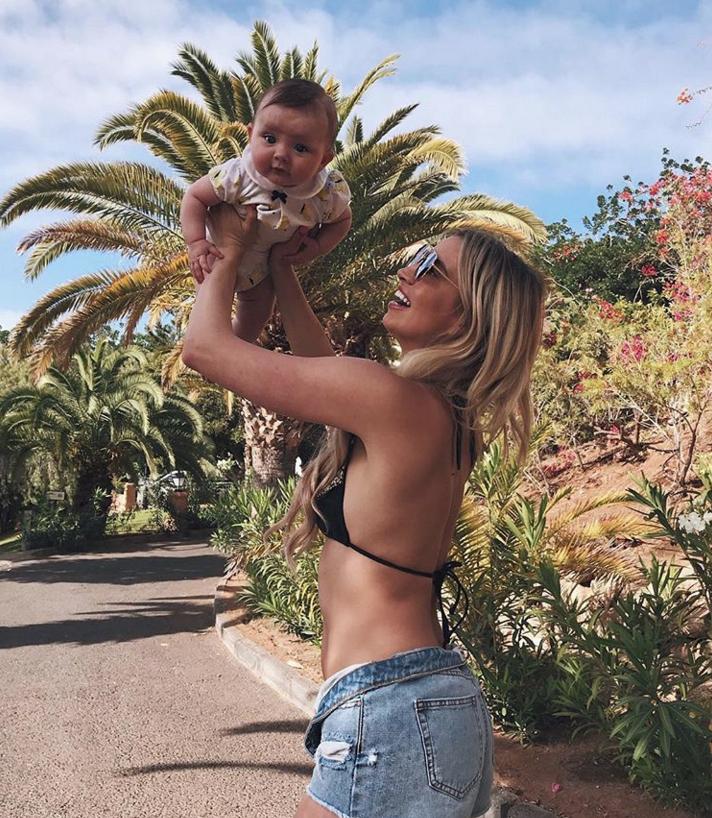 Ferne, 27, kept active during her pregnancy last year, conscious that being at optimum health could ease childbirth.

When daughter Sunday was born in November, breastfeeding helped her drop the baby weight (“You can almost feel your insides drawing back in as you’re feeding”), and she returned to the gym in January, once the GP had given her the all-clear at her six-week check.

“How I work best is to set myself little incentives, little dates in the diary,” she says.

“If you set yourself a big goal from the start, I know from experience it doesn’t work.” 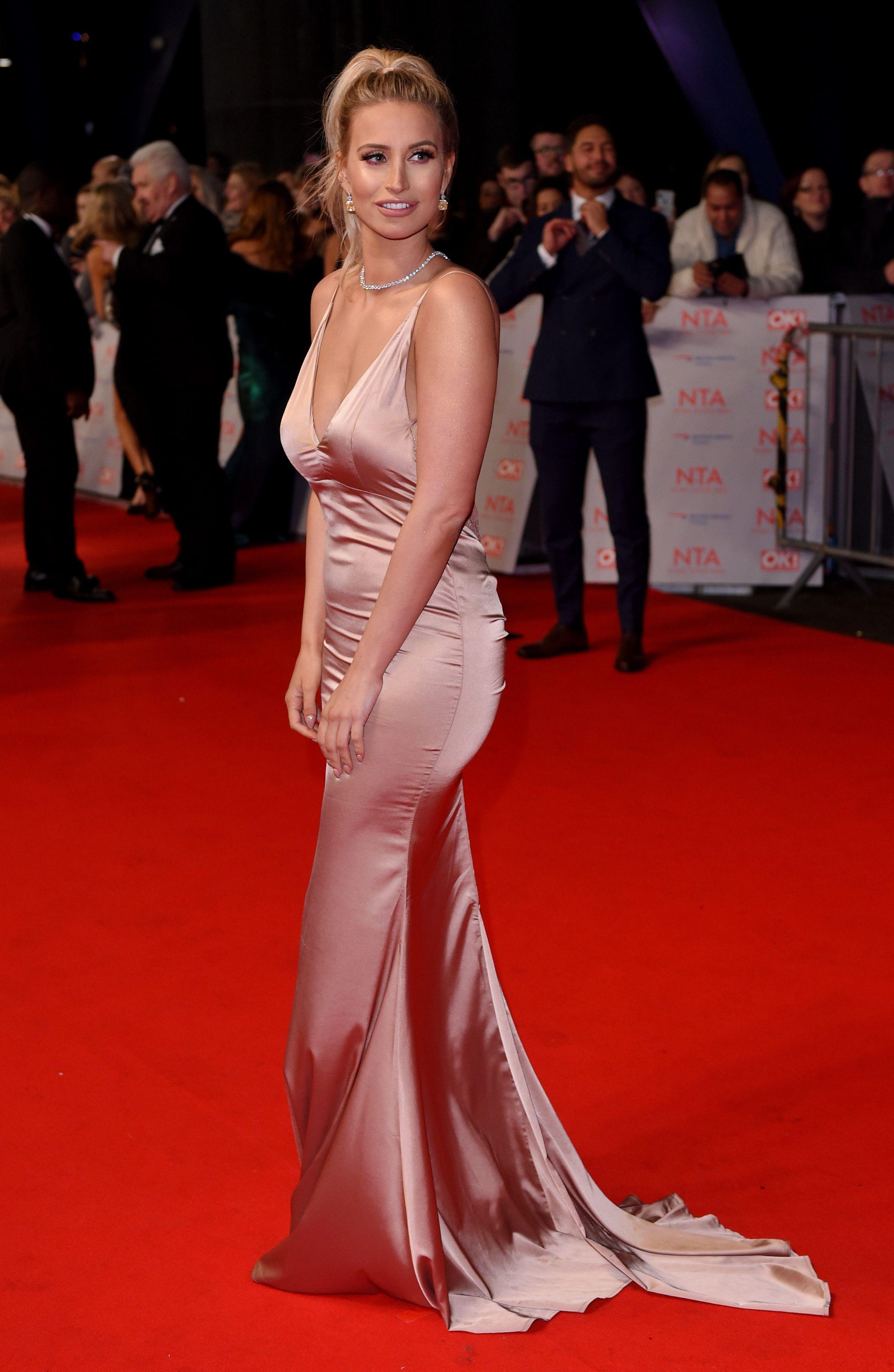 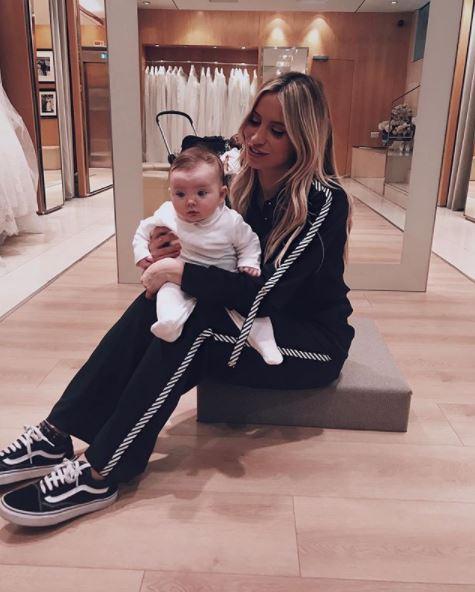 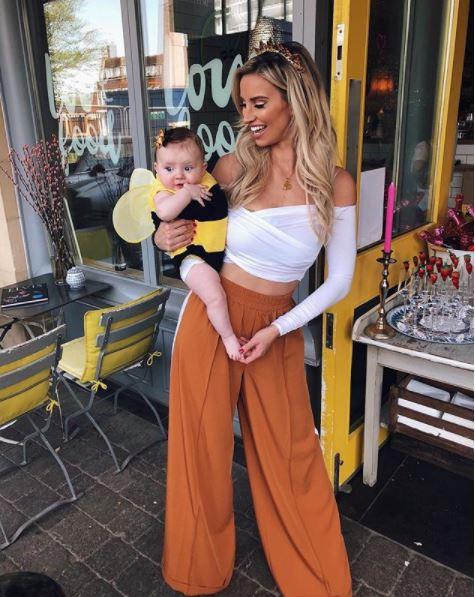 Ferne’s first incentive was being able to walk down the red carpet feeling like a million dollars in front of the cameras at the National Television Awards at the end of January.

“It was a few weeks away, and although it wasn’t enough time to achieve the final image I had in my head or be in the most incredible shape, it was enough to make a very good start.

“I’d had a really up-and-down year the year before and I’d shied away from those red-carpet events, so the NTAs felt important for me. I wanted to feel good in my dress, sexy and confident.” 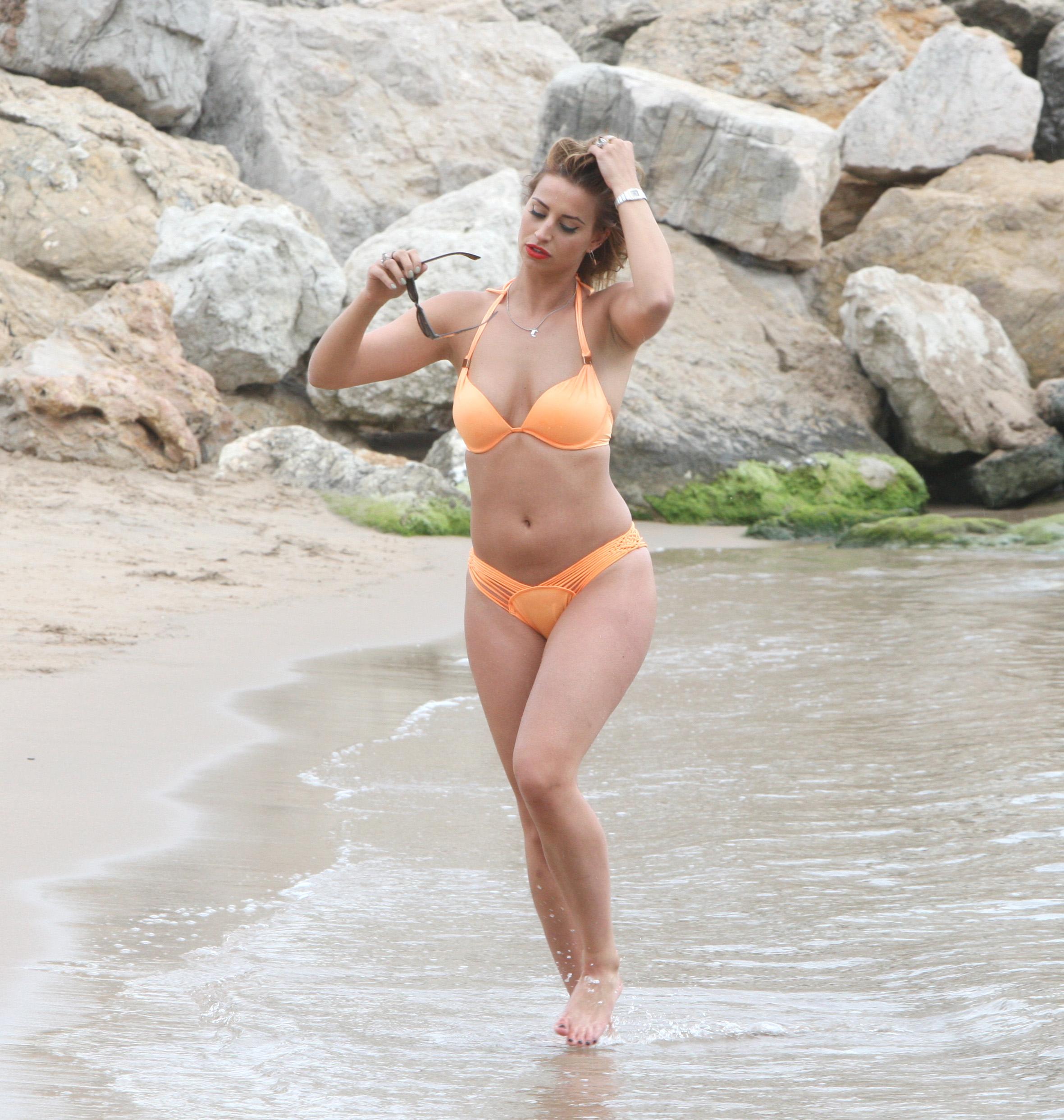 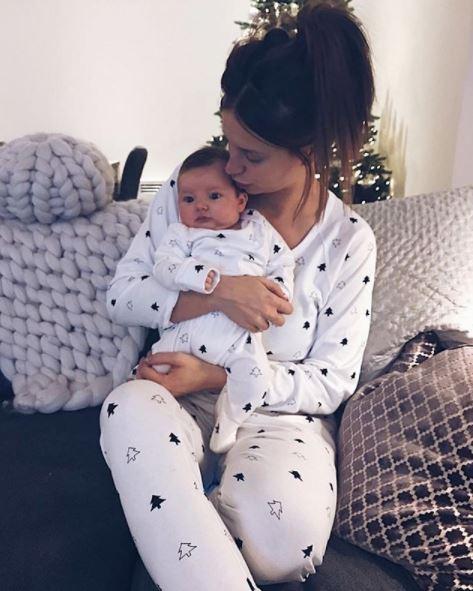 Ferne linked up with personal trainer Ellie Hopley, who she saw twice a week for an hour-long session. They concentrated on weight training and body weight exercises, which have given her such great definition.

“Too much cardio leaves you too skinny, and we all know that curves are in,” Ferne says. “People want that juicy bum – there’s nothing sexier than a woman with all her curves.

“Girls can sometimes shy away from weight training, but Ellie said to me: ‘Let’s build your shoulders and bum and you’ll look smaller everywhere else.’ I love a sexy back and sexy shoulders, and if you work on those areas and know where to target then your waist looks tiny.”

Her waist is the feature she’s proudest of. “I love showing it off,” she says, having arrived at today’s shoot looking sensational in a tiny yellow crop top. “If you’ve worked hard at something, you should absolutely have the right to flaunt it. This body hasn’t come overnight! I trained twice a week, and anything else I managed was a bonus. There are so many things you can do from the comfort of your own home – you don’t need to be in the gym. So I’d get working on my squats in front of Made In Chelsea once Sunday was asleep.”

Ferne also started a super-healthy eating plan, which she stuck to rigidly during the week but then relaxed at weekends.
“It wasn’t a diet,” she is keen to stress. “Whenever I’ve put myself on a diet in the past it just makes me want to go to a McDonald’s drive-thru, eat chocolate and binge. 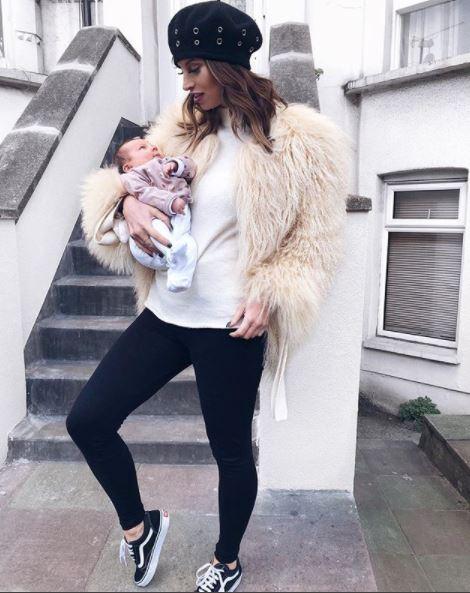 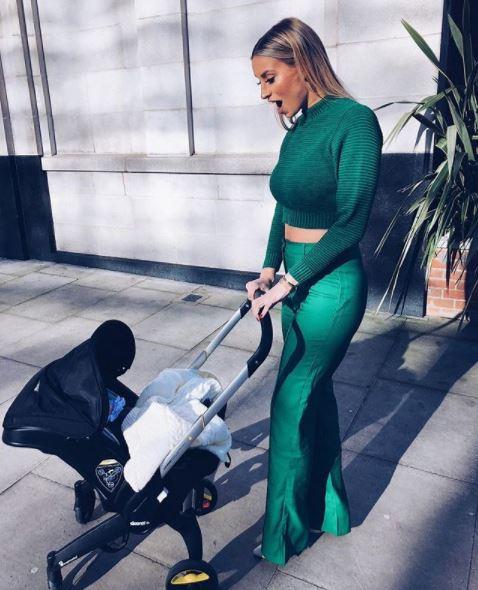 “I was always the tallest girl in school and could eat what I wanted, but you hit an age as a woman – for me it was my 20s – and your weight starts fluctuating. I loved a night out with the girls and I was eating what I wanted and not thinking about it. I look back and although I was never big, I was bloated. Food shouldn’t make you feel like that.

“So I eat organic, I cook everything in coconut oil or water and I make healthy choices. I love knowing what’s actually in my food, and my alcohol intake is drastically smaller.

“But having said that, I’m realistic. I’ve never completely cut out the things I love. I love my Chinese takeaway and going for an Italian with the girls and having a glass of wine, so it’s important to have balance.”

The old “everything in moderation” adage is Ferne’s new motto. “I’ve really cut back on bread, but if it’s a social thing and I’m out for a lovely meal with friends and there’s gorgeous warm bread on the table then of course I’ll have it. Pasta as well. If you have the right portion size, it’s good carbs and good energy. I once watched Gino D’Acampo saying Brits have got pasta all wrong. The Italians keep it fresh and light. My favourite pasta is a little bit of olive oil, a squeeze of lemon, black pepper and fresh chilli – so simple – and just a handful is all you need to feel satisfied. It doesn’t have to be white creamy sauce and a s**tload of cheese.”

She might be a clean-eating evangelist and know her way around a sumo squat, but Ferne hasn’t got a clue what she weighs. “I’ve never owned a set of scales. I just think they’re naff. They’re depressing and I don’t think they work because they don’t give you the bigger picture. So many people ask me how much weight I’ve lost and I genuinely don’t know. I don’t even know how much I gained in pregnancy and I don’t care. I go by how I feel in clothes and how I look in the mirror.” 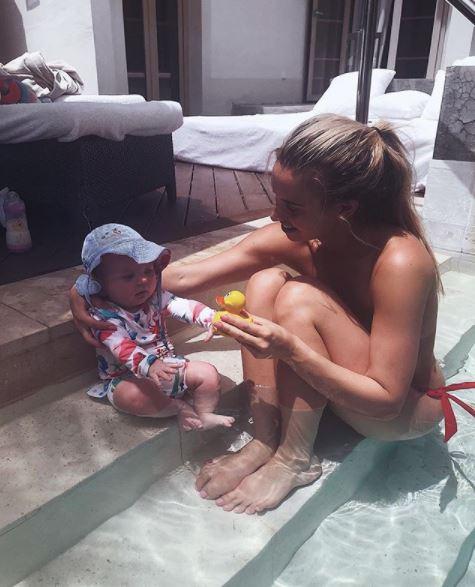 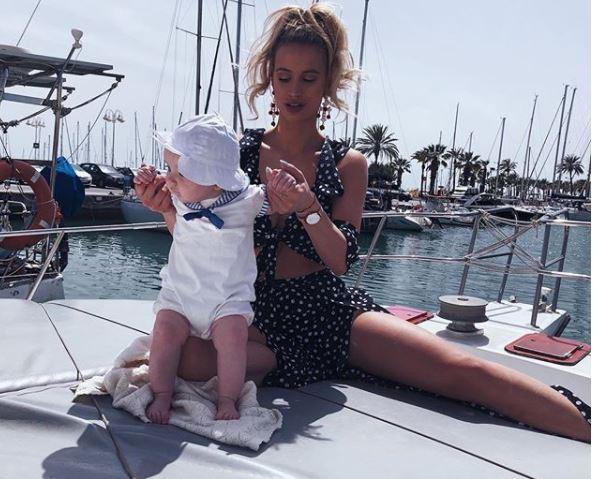 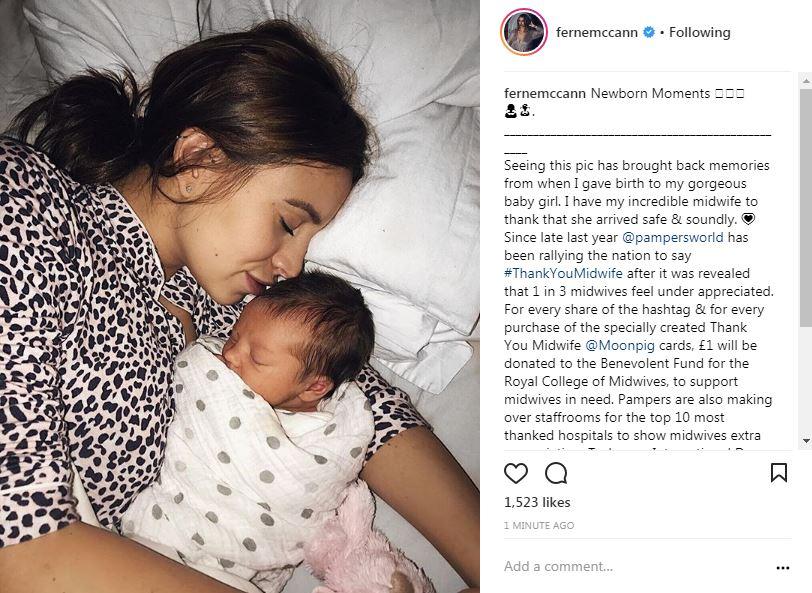 Fitting her training sessions into her busy life hasn’t always been easy. Ferne has great support from her mum Gilly, but she is bringing up Sunday on her own, having split from her daughter’s father Arthur Collins, 25, who is serving 20 years behind bars for last year’s London nightclub acid attack. She doesn’t want to talk about him today but says she’s managing just fine alone, to the point where she simply can’t envisage how a man would fit into her and Sunday’s bubble.

“I can’t imagine myself raising Sunday with a partner because that’s not the norm for me. I do it on my own and I don’t know any different.

“[A relationship] would have to be something I gave a lot of thought to, but it’s so not on my radar. I think women are different to men – men need someone and I don’t think we do. When it comes to sex, I just don’t need a man. I used to think I did. Ever since I was 14, I always had to be texting someone or having the thrill of the chase, and now I’m just like ‘whatever’.

“My life is Sunday, work and happiness, and that’s what I’m concentrating on. I’ve never been happier and yet I’m on my own. But the longer I leave it, the harder it’ll be to let someone in because I’ll be so set in my ways. For now I like watching Netflix, being with Sunday and eating amazing food.”

The last few months have been taken up with filming for Ferne McCann: First Time Mum, the ITVBe reality show that followed her warts-and-all journey as a new mother, including everything from the toll breastfeeding has taken on her boobs to how childbirth has affected her pelvic floor.

“You have to be an open book when you’re doing a show like that – it has to be properly fly-on-the-wall. If I was to start holding things back then that wouldn’t be the real me.”

I can't imagine raising Sunday with a partner

There are plans for another series, and Ferne says to “watch this space” when asked if her love of health and fitness could potentially throw up another career avenue. She’s already “sprinkling little bits and bobs” of fitness-related content on her Instagram.

“I’m just so busy and I do experience the work guilt, but it is what it is,” she says. “This industry is so fickle and nothing is guaranteed. You get that risk when you’re self-employed, whatever you’re doing. This is how I earn my money, so I have to strike while the iron’s hot. I give my everything, but you can’t be in 10 places at once. Once you have a baby, I don’t think you’re ever completely on top of things. Your priorities change. I’m less all guns blazing and much more relaxed. I don’t know how people cope with more than one child, though!”

Before she heads home to baby Sunday, Ferne wants to emphasise that no new mum should feel under pressure to lose weight. She acknowledges she was lucky that the pregnancy pounds fell off quite easily, and points out that her fitness story has been a slow burn with no quick fix.

“It’s all well and good me telling you what I’ve done, but I don’t want to make other new mums feel bad. It’s what works for you and it should be all in your own time and at your own pace. But personally, I’ve never felt better or stronger or more content. And it’s all thanks to Sunday.”