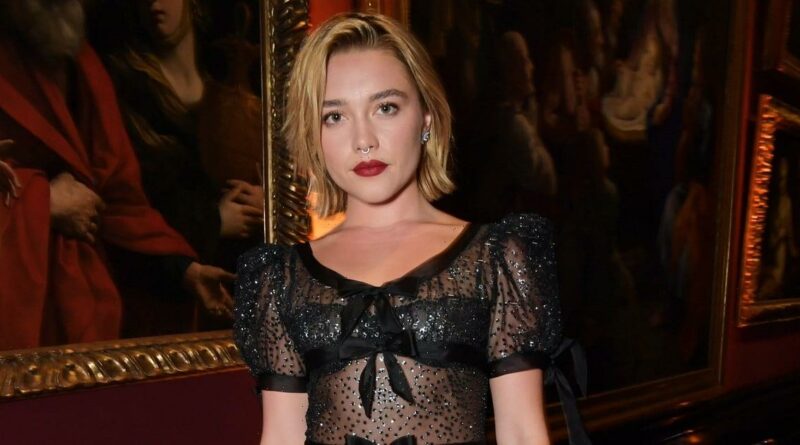 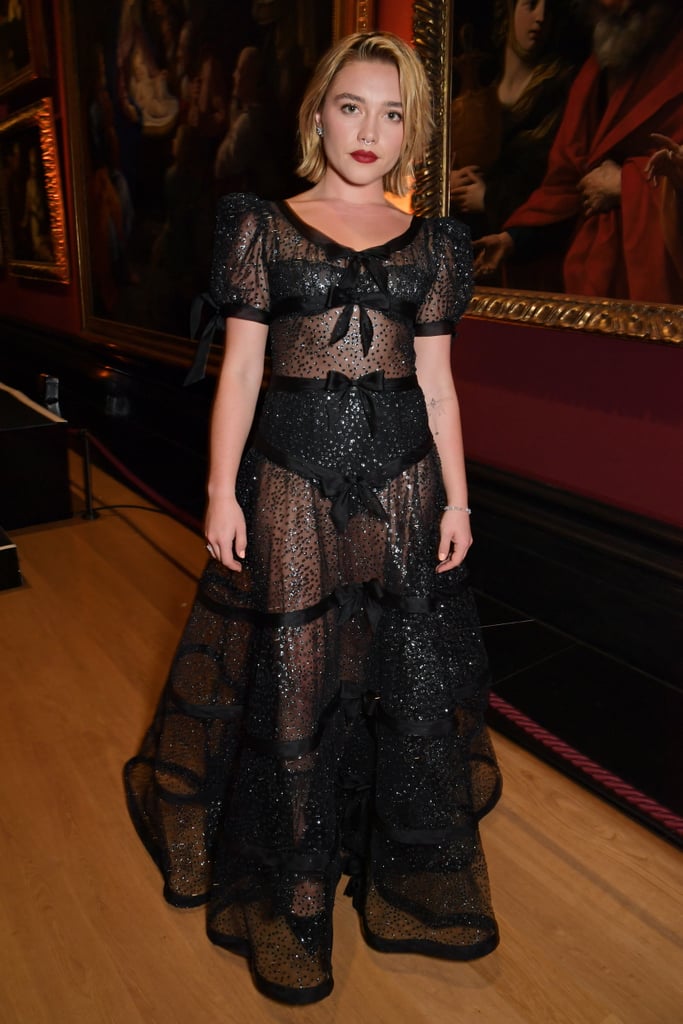 Florence Pugh is on a flawless red carpet run, promoting her movies “Don’t Worry Darling” and “The Wonder” in grand style. On Sept. 5, she brought sartorial drama to the Venice Film Festival, wearing a Valentino Haute Couture sequin sheer gown with a bold front slit. In October, she graced the London Film Festival in a peach, feather-trimmed cutout gown from the French fashion house. Her most recent look fits right in with her red-carpet aesthetic, embracing both the sheer and embellished trends she’s been wearing as of late.

Styled by Rebecca Corbin-Murray, Pugh stepped out at the Academy of Motion Picture Arts and Sciences New Members reception in another show-stopping gown. She chose a Rodarte Fall 2022 metallic tulle and silk organza bow gown, with a floor-grazing hem and romantic puff sleeves. The dress features allover sequin embellishment and bow detail from the neckline to the hem. The actress wore a half-cup balconette bra and high-waisted briefs underneath, and finished the look with windswept hair and a striking dark-red lip. For jewelry, she opted for floral-inspired diamond stud earrings and a sparkling septum ring.

Pugh is quickly becoming a fashion darling, whether she’s twirling on the red carpet in a feathery gown or a shimmering, slit-front dress. She commanded attention at Paris Fashion Week, attending the Valentino Spring 2023 show and after party in two standout looks.

At the presentation, she joined Zendaya on the front row, wearing a printed pink turtleneck minidress. She layered it under a white cape and complemented the outfit with the brand’s viral platform pumps. For the after party, she put her love of shimmering embellishment on full display in a Valentino sheer crop top and matching miniskirt. She brought the look together with lace-up sandals and Valentino’s One Stud nappa handbag.

Ahead, get a closer glimpse at Florence Pugh’s glittering Rodarte dress from every angle.