Home » Fashion » Gucci and The North Face Take a Hike

The hills are alive with the sound of “Bad Moon Rising.” The song by ’70s rock band Creedence Clearwater Revival soundtracks a campy video featuring models frolicking on a mountain trail in the Alps wearing pieces from The North Face x Gucci capsule collection. They include puffer coats cast in exuberant floral prints, as well as jackets and vests in bright hues like Kelly green and azure. And there are trophy accessories, of course: Backpacks, sleeping bags, tents, and fishing waist packs (essentially, the Gucci logo fanny pack 2.o) show up in the similar fun patterns or bold colors.

Gucci’s Alessandro Michele is fashion’s ultimate magpie, gleefully incorporating instantly recognizable Hollywood logos from Disney, Paramount Pictures, and the Chateau Marmont into the bejeweled madcap pilings of his past collections. Now, he’s trained his sights a bit farther north, on the outerwear company founded in Berkeley, California, in 1966. There’s something for everyone in the lineup, whether you prefer glamping it in Gucci web high-heeled loafers or hitting the trails in hiking boots, which feature Michele’s reinterpretation of The North Face’s iconic Half Dome logo. 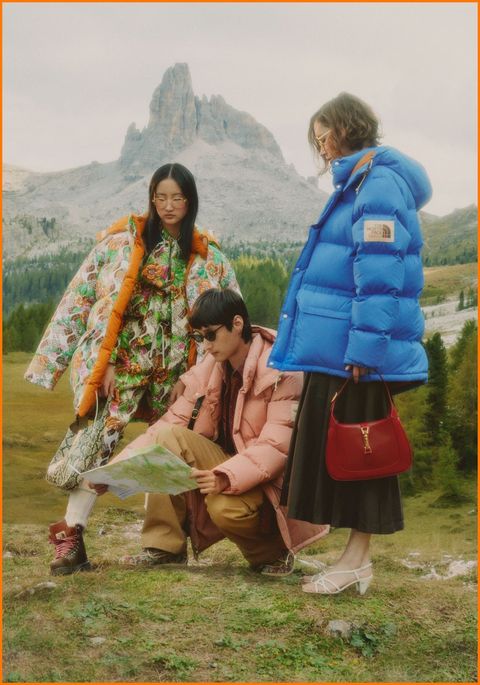 Of course, Michele is no stranger to collaborating. Just recently, he co-directed a seven-part miniseries with Gus Van Sant. He joined forces with designer Dapper Dan on a capsule, and he also has an ongoing partnership with Disney. Michele, perhaps more than anyone, knows that it is always best to take a hike with a partner.