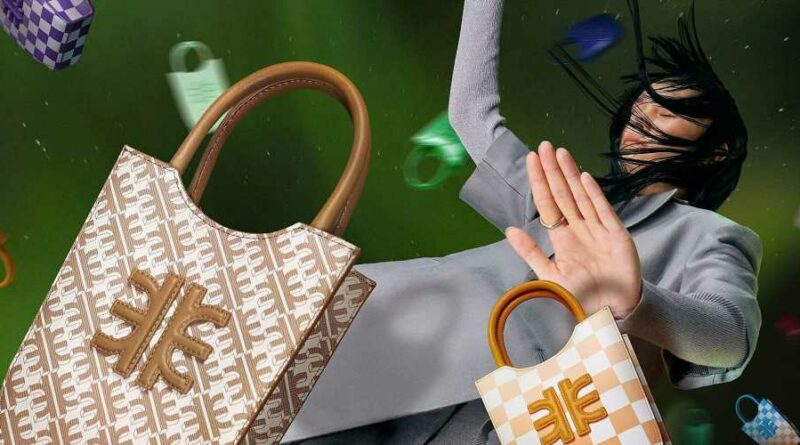 JW Pei is having a moment. The not-so-under-the-radar bag brand has blown up over the last year thanks to celebrities like Megan Fox and Emily Ratajkowski wearing (and rewearing) its popular $80 Gabbi handbag, which you've also likely seen circulating on TikTok and Instagram. Now, the brand has launched a new "it" bag you'll be seeing everywhere soon: Meet the Fei collection.

You may already recognize the JW Pei Fei bags; they were all over New York Fashion Week thanks to a handful of fashion editors and influencers that accessorized with the tiny tote. Made with vegan leather, the Fei bag has plenty of special features, from its cutesy gift bag shape to the 100+ styles it comes in, including colorful gradients and chic croc designs. But the most eye-catching detail is also the most meaningful: Each bag has a logo that pays homage to the designer's Chinese heritage. According to the brand, the stylized version of the Chinese character "非" (Fei), is part of the founder's family name, "裴" (Pei). The character "非" translations include "not conforming to," as well as "extraordinary."

The bags range from $70 to $130 on Amazon, with a majority of the price tags clocking in under $100. You can also shop them directly from JW Pei's website. The micro bag is just large enough to hold an iPhone 12 Pro Max and a tube of lipstick, or other essentials like a slim wallet and keys. Reviews are yet to come in for the Fei collection, but we have a feeling they're going to start selling out soon.

And if you've got your eye on the brand's Gabbi bag after Megan Fox stepped out in it yet again, JW Pei has recently launched it in several new colors, including baby pink, deep red, and royal blue. Shop the rest of the JW Pei Fei collection on Amazon here.