Home » Fashion » If you’re dressing up this Halloween, use your brain

At some point in the past few years, Halloween, the majority-American festival of spookiness, became a “thing” in Australia. 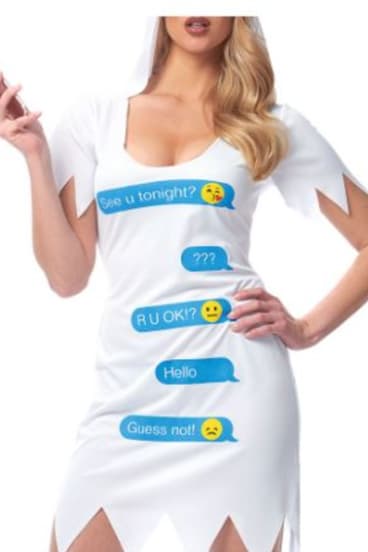 Ever been ‘ghosted’? Now there’s a costume.Credit:Party City

And since the festival, which is said to actually originate from Celtic harvest festivals, started being “observed” here – at least in the commercial sense; see Mother’s Day and Valentine’s Day for more examples – so too has the custom of dressing up.

So it’s no surprise that in the past few weeks I have seen promotions from online costume shops spruiking all manner of Halloween costumes.

First, the good, and clever, a costume that a woman could wear to a party dressed as “ghosting”, the unsavoury habit people (although let's face it, mainly men) in the dating world have of disappearing (like ghosts) midway through communications, even after a first date.

While it’s unfortunate that the costume needs to be cleavage-bearing and have a short, jagged hemline, the point is still rather clever, and I suppose you could layer it over jeans and a turtleneck for added “You can’t touch this anymore” impact. 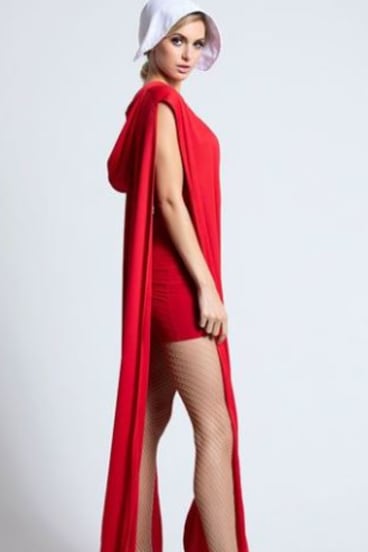 Not OK … the handmaid’s costume that was withdrawn from sale.Credit:Yandy

Of greater concern is the “sexy handmaid” costume that has also bobbed up online, clearly cashing in on the popularity of The Handmaid’s Tale but clearly missing the point of the series, that is women being sold for the purposes of forced breeding in a dystopic patriarchy. Abuse – even of the fictionalised variety – is never sexy.

Even Margaret Atwood, the author of the book that inspired the hit TV series, Tweeted this about the women of Gilead being sexualised for cheap Halloween thrills: "Not sure this version will sell many, however. Who exactly would wear it, and on what occasions? Anyway the shoes are wrong."

The retailer responsible, Yandy, stopped selling the costume after the outrage, with this explanation: “Over the last few hours, it has become obvious that our ‘Yandy Brave Red Maiden Costume’ is being seen as a symbol of women’s oppression, rather than an expression of women’s empowerment,” a company statement read. 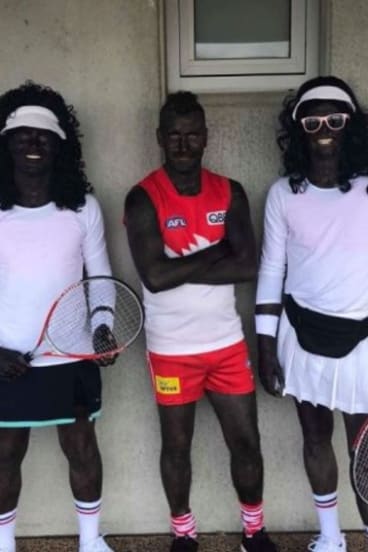 Players from a Tasmanian football club have drawn criticism after dressing up in blackface costumes for their after-season celebrations.

“Our initial inspiration to create the piece was through witnessing its use in recent months as a powerful protest image.”

It’s true that women have dressed as handmaids  to protest US President Donald Trump’s policies as well as his nomination of Brett Kavanaugh, who has been accused of sexual assault, to the US Supreme Court.

Red has also become a colour synonymous with female power, as seen in Australia's parliament the other week when several female MPs were spotted wearing crimson on the benches.

How a fancy-dress company thinks that makes it into a symbol of “empowerment” that it can exploit for commercial gain is anyone’s guess but it wouldn’t be the first time a fashion company made a tone-deaf move in the name of “female empowerment”.

Last year, at the explosion of the #MeToo movement, some companies released T-shirts and jewellery bearing the hashtag, many of which were widely condemned on social media. And then there is the litany of slogan T-shirts that have been designed in haste, without thinking and, sadly, without ever consulting a living, breathing woman.

It was also saddening to see yet another “blackface” controversy during the traditional “Mad Monday” football celebrations last month. Three players from a Tasmanian football club no doubt thought it would be hilarious to paint their bodies black and “dress up” as tennis stars Serena and Venus Williams, and Kenyan-born Sydney Swans player Aliir Aliir.

The photo was subsequently removed from the social media account where it was originally posted but not before – rightly – it was circulated and shamed for the racist buffoonery that it is.

Dress-ups are fun but they can also go too far. I suppose the best advice about Halloween I can think of is this: Ask yourself, “Would I be OK if my son or daughter wore this?” If the answer is, ‘no’, then neither should you.

Sure, we can have a laugh and a dig and most of the time, we’re a nation of pretty thick-skinned individuals. But when it comes to Halloween, or any dress up, if it’s racist (or likely to be interpreted as such by anyone) homophobic, sexist, mysoginistic, or even on the fringes of wrong-town, just don’t do it.

There are plenty of smart, funny, inventive Halloween costumes that don’t resort to cheap shots at minority groups (or women) to make their mark. You can still win best dressed, and use your brain.