Home » Fashion » In her shoes: SJP on heels, women and having it all 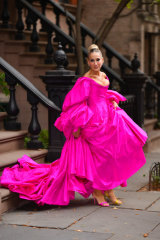 Well heeled … Sarah Jessica Parker is coming to Australia to promote her range of shoes.Credit:GC Images

As Carrie Bradshaw on Sex and the City, actress and entrepreneur Sarah Jessica Parker knew shoes. One of the show's most memorable episodes has her character, a fashion-obsessed columnist for a fictional New York newspaper, realise her shoe obsession has cost her the chance of home ownership. For Carrie, you could say Manolo Blahniks were her avocado toast.

After the series ended, Parker, a fashion icon in her own right, went on to launch her own shoe brand, SJP, which she stresses is different from many other "celebrity" products on the market.

Parker, 54, has a reputation for being hands-on in all her business ventures, from her shoes to her new wine, made in partnership with New Zealand maker Invivo, something she says can put some people off. She trials all the SJP samples herself, attends buyers' meetings and spends a great deal of time on the shop floor.

"I don't know how to function in business without being 100 per cent involved," she said. "It's just the way I work … I only collaborate [in business] when I can be that involved. Not everyone wants somebody involved the way that I am and I try to warn people in advance that it's not a cavalier relationship.

"I don't think of this as a celebrity brand, I never have, in much the same way as when we launched [Parker's perfume] Lovely, we weren't launching it as a celebrity fragrance … we were looking to create a signature fragrance." 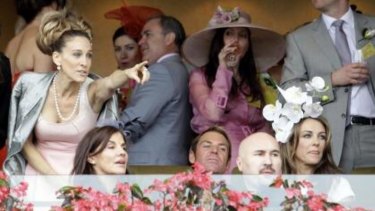 Sarah Jessica Parker (left) last visited Australia in 2011, when she watched the Oaks at Flemington alongside then couple Shane Warne and Elizabeth Hurley (right).Credit:The Age

Parker said she designs shoes with the modern woman in mind, whether she's going to work, a parent-teacher meeting or socialising. 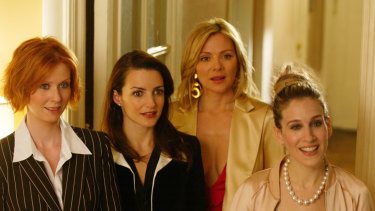 "I've spent the better part of my adult life working in high heels," she said. "[Women] have a natural understanding of what feels good. For me, one of the things I continue to think about … is comfort." 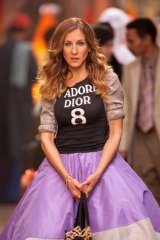 Sarah Jessica Parker as Carrie Bradshaw in the film ‘Sex and the City 2’.

Her desire to connect with customers is bringing her to Australia this month, where she will hold a shoe signing at David Jones' Sydney store  as well as speak at two networking breakfasts for Business Chicks.

"I want to hear what [customers are] needing and wanting and how our shoes feel. The reason our business has grown the way it has is because of the comfort. It's not an easy problem to solve because it's a peculiar engineering issue … and I don't think male designers typically have had the experience or opportunity to put their own shoes on and do what we expect them to do [through life]."

In her only Australian interview ahead of the visit, her first since Oaks Day 2011, Parker spoke about how she balances her business interests with her acting roles and family (Parker is married to actor Matthew Broderick and they have three children: James, 16, and twins Marion and Tabitha, 10).

She said the key is being organised, present, reliable and prepared, things she admits are more easily achievable for her than many women.

"I look to women working two and three jobs with very little financial reward, with very little opportunity to choose what they want to be doing, without the kind of childcare that I have, and when I am tired, I recall the privilege of my professional life. And if I am feeling over-extended, it's my fault," she said.

Parker said she thought women in the entertainment industry were "doing better until it was put in such stark relief", a reference to the #MeToo revelations. 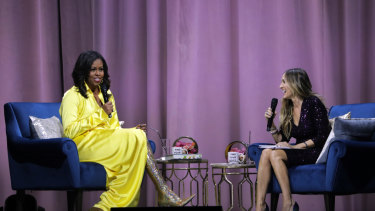 Former first lady Michelle Obama (left) is interviewed by Sarah Jessica Parker during an appearance for her book, “Becoming: An Intimate Conversation with Michelle Obama”.Credit:AP

"I was hyponotised into thinking we were making progress, that we were further along but that didn't mean that I thought it was 'corrected' and that we had settled at a place we were all content," she said.

As a working actress in her 50s – she and Broderick will co-star in a revival of Neil Simon's play Plaza Suite on Broadway next year – Parker said she had been fortunate not to experience ageism, although she acknowledges it's still an issue in Hollywood.

"I understand that there is an idea of what has value and what doesn't but … all of those things are just not welcome any more," she says. 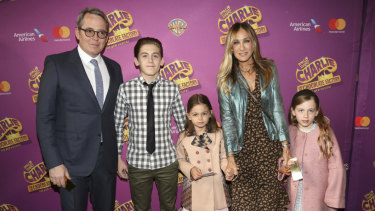 Parker with her family, husband Matthew Broderick and their children (from left) James, Tabitha and Marion.Credit:Invision

Still, Parker said there is a lot to be hopeful about, pointing to positive changes around diversity, as well as the examples set by her children and young people generally on matters of environmental responsibility.

"For my children, it’s [sustainability] their first language … we’re all being forced to learn that language," she said.

Sarah Jessica Parker will appear at David Jones, Elizabeth Street, Sydney, on Sunday, October 20, 5pm-7pm. She will appear at the Business Chicks breakfasts on October 21 in Sydney and October 22 in Melbourne.