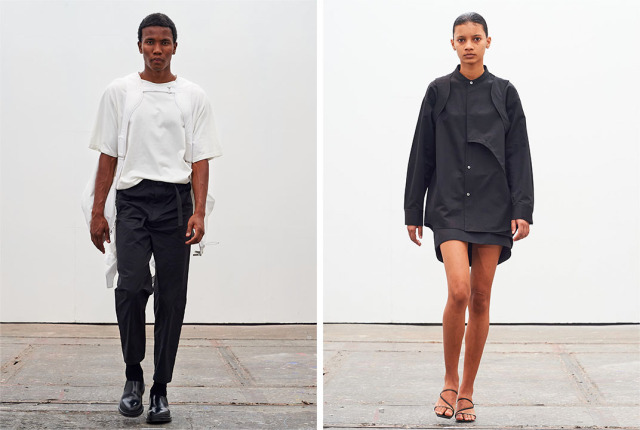 Would you buy clothes from Extraless because they’re made in Japan out of mostly Japanese fabrics? Because they have a utilitarian cool evocative of Helmut Lang in his prime? Because the brand is committed to social and environmental accountability, and to supporting the arts? And because its ethos is also slyly anti-corporate?

Founder Badé Fatona hopes for all of the reasons above as he launches his first full-fledged fashion project. The collection, dubbed “Issue 01,” quietly made its debut at a dedicated web store before Christmas, with his women’s “Delta” shirt with a soft, detachable harness and “Parachute” windbreakers with built-in backpack straps among top sellers.

The British-Nigerian entrepreneur comes at fashion from an unusual angle, having studied law and worked in sports management, as a certified gemologist, and as a trader in oil and gas.

A long-standing interest in fashion compelled him to launch a U.K.-based online shop selling a mix of Japanese and British brands and eventually some basic clothing as a private label, which got immediate traction. He ultimately shut down the store, selling off some of the technology, and spent about 18 months developing the Extraless line, designed by a multicultural collective under his direction.

While the clothes for men and women are relatively simple, they are carefully considered and thoughtfully detailed. Prices range from 110 pounds for a T-shirt to 550 pounds for a windbreaker.

A fascination with Japanese culture compelled Fatona to set up shop in Japan, roping in Finnish stylist Anna Pesonen to help on image, art direction and product development.

From behind dark glasses on a Zoom call, Fatona explained that he spent more than a year perfecting the fit of his T-shirt, which will have a higher purpose at Extraless. He plans to partner with various environmental and humanist organizations on logo T-shirts, giving them 100 percent of the profits.

His commitment to social causes and the arts was expressed in an exhibition Extraless staged at a Tokyo gallery in October. Titled “Land of the Rising Sons,” it featured photography of “black Japanese boys of mixed race” that was well received.

Once coronavirus restrictions ease, Fatona plans to mount other cultural events, viewing these as services, while social channels will be the other main communication vehicle for Extraless.

While he’s plotting partnerships with some high-end retailers, Fatona intends to operate outside the fashion system, introducing designs four times a year outside of any organized fashion weeks.

While it’s a small company now, with only five staff members, ultimately Fatona has eyes on redefining “what a corporation looks like, and how a corporation plays and operates within society, as a valuable member of society.

“We’re all kind of asphyxiated by corporate power,” he explained. “You’ve got Facebook, which is decimating democracy, you’ve got Alphabet, which is Google, amassing an incalculable amount of human data, and you’ve got Amazon that’s putting independent businesses out of business.…We’re trying to create a blueprint for the corporation in the future.”