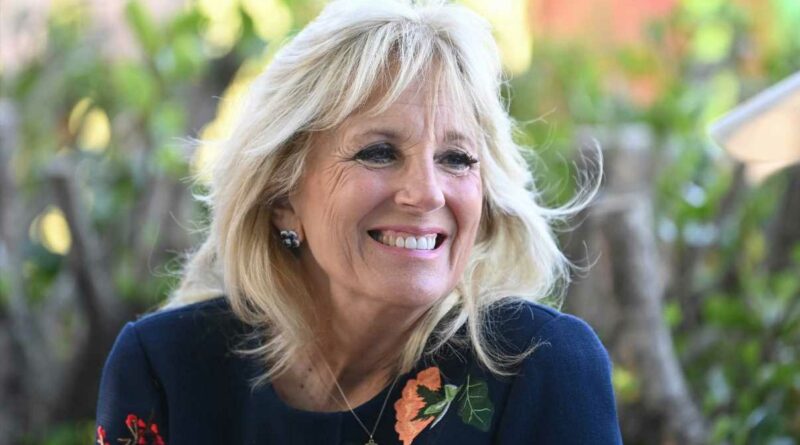 Veterans, military families and the importance of early education were three of the issues FLOTUS focused on during her appearances around the G7 Summit and her first official trip abroad in her new role. After Sunday’s meeting with Queen Elizabeth, Jill Biden planned to meet with U.K. veterans, who took part in Walk of America, a 1,000-mile trek across the U.S. for which she served as patron. FLOTUS, whose father and son Beau served in the U.S. military, addressed military families upon arrival in the U.K. last week.

Sitting down with representatives from the Bude Surf Veterans, a volunteer organization that provides social support and surfing excursions for veterans, at an outdoor picnic table Saturday at the Newlyn Art Gallery, the first lady introduced herself, “‘So, I’m Jill,’” before discussing the therapeutic benefits of the ocean, as well as other non traditional ways to help veterans. Biden, who spent her 70th birthday earlier this month at the First Family’s beach house in Delaware, mentioned that she has a white surfboard with a butterfly on it. Two popular surfing destinations – Australia and New Zealand – are the only countries the well-traveled Biden has yet to visit.

“I feel like I’m a partner on this journey of healing, bringing together and unity,” Biden told a pool reporter from the PBS NewsHour Saturday. “It’s a global, [thing] right. It’s a global kind of thing, and that’s what I hear from the other spouses as well.”

A lifelong educator, who has a summer break from her English professor post at Northern Virginia Community College, Biden and her team have opted thus far not to speak publicly about her fashion choices. Despite that, the power of appearance to deliver a message appears to have been given a considerable amount of attention, as evidenced by FLOTUS’ three wardrobe changes on Friday. Even without mentioning fashion, the first lady has been giving American designers Gabriela Hearst, Brandon Maxwell and Michael Kors global attention at key G7 appearances. While Joe Biden’s next orders of business includes a meeting with Vladimir Putin, the first lady is scheduled to depart for the U.S. Sunday night.