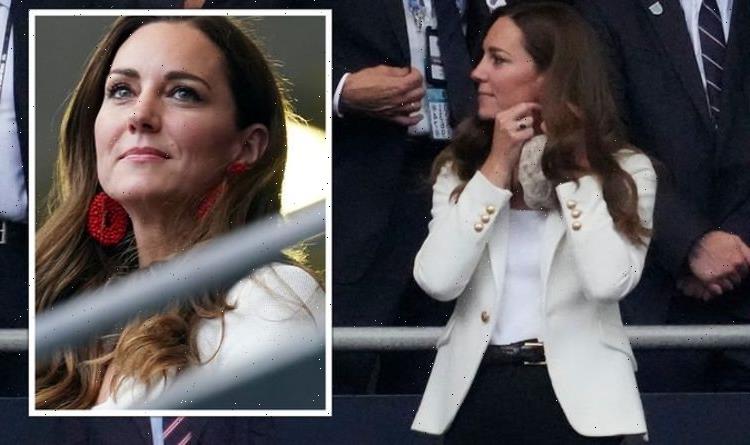 Prince William and Kate Middleton sing God Save the Queen

The Duchess of Cambridge was spotted wearing an off-white blazer, a white t-shirt, black jeans and a black belt this evening. The outfit, which was paired with red earrings, appeared to mirror the colours in the St George’s flag. Kate, 39, was seen alongside her husband Prince William, 39, and her son Prince George, seven, who were wearing suits.

Tonight was Prince George’s second outing during the Euro 2020 tournament.

He also attended the England vs Germany match.

Prince George appeared to match his father in a blazer, striped tie and shirt.

However, George wore a pale blue shirt and navy jacket while the Duke wore a black suit and white shirt.

Kate appeared to be wearing a white waffle blazer from Zara which she has worn before.

The Duchess often champions the high street and is seen recycling her outfits.

The white jacket is made from a slightly stretchy waffle fabric.

The jacket includes one silver button on the front and three on the sleeves.

It’s thought that Kate has been seen wearing the blazer before on several occasions.

Once in 2016 on the royal tour of Canada and again in 2017 at the Docklands Sailing and Watersports Centre.

She matched the look with red, beaded hoop earrings.

Twitter users were quick to comment on Kate’s outfit change after she was seen wearing a pink midi dress for a day of Wimbledon finals.

The dress appeared to be a crepe midi dress in blush from Beulah London.

The dress by the London-based designer costs £695.

One Twitter user said: “Respect to Kate Middleton for making it to both the Wimbledon and Euro finals with about two hours and an outfit change in between.”

Another person said on the social media platform: “Kate Middleton went from post-match chat with Djokovic after #Wimbledon, quick outfit change, and now in the box at #EURO2020 .. I’m so jealous LOL!”

Another Twitter user said: “Kate Middleton has made it from SW19 to Wembley and also changed her outfit.”

Another said: “Imagine being Kate Middleton. A few hours ago, she was in the Wimbledon final.

“Now she’s singing God save the queen in Wembley… In different outfits.”

Another individual said: “Kate Middleton has had a right busy weekend!

“Wimbledon women’s final yesterday, wheelchair and men’s final today, quick outfit change and off to Wembley to watch the footy.”