First, they’ll tell you that what surprises people most about their family is its normalcy. Then, the Fendi women will recount childhood memories so removed from standard nostalgic fare as to seem otherworldly.

Delfina Delettrez Fendi recalls sitting on Karl Lagerfeld’s lap as a young girl and enjoying “a perfect view on to his drawing”. For Leonetta Fendi, Delfina’s younger sister, the moment that confirmed her status as a fashion insider arrived earlier – one day after her birth, to be precise, when Lagerfeld was inspired to dash off a portrait of the newborn. “He tells me I look the same now, that I haven’t changed one bit,” she says, smiling. 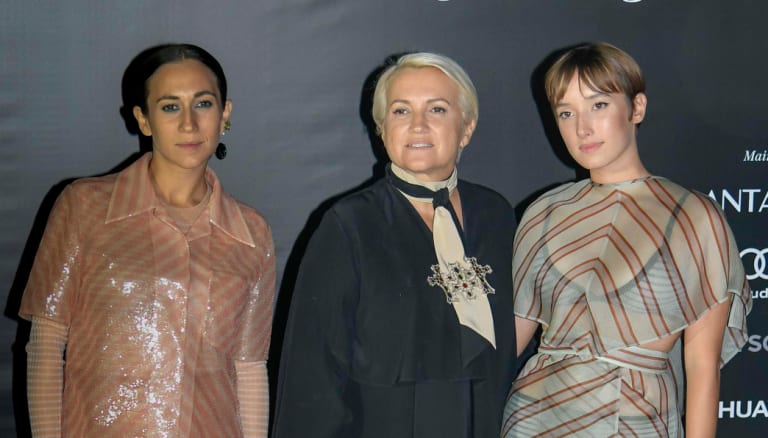 “He was amazed by her. She was very beautiful. Was,” laughs Silvia Venturini Fendi, creative director for accessories and menswear – and Delfina and Leonetta’s mother.

“I met him when I was five years old,” she says of Lagerfeld, who has designed womenswear for the house that bears her family name since 1965. “In a lot of ways Karl is family. Here is the kind of magical place where these values are very strong.”

The specific magical place on this blazing, blue-sky afternoon is Silvia’s Rome studio-office, tucked behind an arch of the building Romans call the Colosseo Quadrato – the monumental, marble-clad, Fascist-era edifice turned Fendi HQ that looms over the city.

Here, in a sprawling space with ample room for a king-sized leather sofa and a trio of logo-emblazoned aeroplane seats, the Fendi women interact with a playful, teasing ease that transmutes any old anecdote into a three-woman storytelling relay.

Each inhabits a distinct and complementary role in the family and business. Delfina, 30, is the soignée jewellery designer, who founded her own company, Delfina Delettrez, in 2007.

A mother of three, including baby twin boys, she turns menswear-forwomen into a tempting prospect (today’s ensemble: a buttoned-to-the-top, short-sleeved shirt that clashes appealingly with a devil-printed skort from Fendi’s autumn/winter collection) and draws inspiration for her jewellery from her life.

“So many of my pieces were born just by playing with my kids and observing toys,” she says. One recent creation – a diamond hoop earring that “zips” closed with a sliding pearl – also functions as a wand for bubbles. “It really works,” she says, as she hooks it into her right earlobe.

Leonetta, 21, a Botticelli beauty in a pixie cut, frayed-denim miniskirt, over-sized Adidas T-shirt and earloads of chunky, mismatched Fendi earrings, has graduated from the University of London’s School of Oriental and African Studies, with a degree in politics and development studies. She’d like to go back for her master’s degree, in migration studies or business – but she’s looking for a way to merge her activist instincts with the family business. “Fashion has often been left outside of politics because it’s been considered more frivolous and female,” she says. “Yet it can have a lot of influence and bring about positive change.”

It says a lot about Silvia that even daughters as seemingly independent as these look to her as a source of inspiration and validation. Both women regard their mother, the warm yet analytical blonde, with respect. But then they have generations of precedent, Fendi having been a matriarchy ever since Adele Casagrande, Silvia’s grandmother, founded the house in Rome in 1918. She renamed it Fendi after marrying Edoardo Fendi in 1925 and the couple passed it down to their five daughters: Paola, Franca, Carla, Alda and Anna, Silvia’s mother. The sisters’ association with the family business was so close that the Italian government granted them the unusual right to pass down the maternal surname.

“I was born into a family where being a woman was a plus, so I had a privileged point of view,” Silvia says. “It’s when we go outside of our comfort zone that we understand that being a woman like that, it’s not easy.

“I never felt this in my professional life because the company was based on this formula, where women were bosses – but I had more problems in my private life, because I felt like a woman who didn’t need anything from anyone.”

The thing her children saw (along with Delfina and Leonetta, there’s son Giulio, 28) was a mother committed to her craft. “They know well that everything you get, you have through your work,” she says.

Delfina: “Almost every day I used to go to my mother’s studio after school.”

“At the time it was very close to the house,” Silvia says. “It was a big, big, building with big, big corridors, and they used to come in the afternoon and play with the spinning chairs.”

“Do you remember the day you gifted us the dog?” Delfina asks. “You told us to turn the chair around and there was our first dog … Going to your studio in my school uniform felt, to me, like flying to New York or somewhere amazing. It really nourished the creative side of me.”

Naturally, even amid the warmth and mutual admiration there are chaotic moments. Micro-conflicts. Shouting. “We are three strong and opinionated women,” Leonetta says with an Italianate shrug. “So, yes, we clash.”

“Sometimes we argue because we both want her attention,” says Delfina.

“Or her clothes,” adds Leonetta.

“There is one very big problem,” Silvia says, wielding an authoritative index finger. “We all have the same shoe size and the same height. Now, thank God, I have a bit of weight on, so they cannot steal everything. But still, they steal everything.”

Since Leonetta moves between Rome, London and Brussels, sometimes she can’t even remember where she’s left her spoils. The situation is only set to become more complex now that Delfina’s 11-year-old daughter, Emma, is getting in on the intergenerational pilfering act.

But Silvia is nothing if not eagle-eyed. She nods in Leonetta’s direction.

“I notice how you are looking at the crocodile Peekaboo in my closet.”

“You have a crocodile Peekaboo?” asks Delfina.

And the Fendi women laugh.

You get the feeling that momentarily irritating though these borrowing habits may be, Silvia enjoys the fact that her daughters covet the pieces she owns – often pieces she created.

These informal exchanges gave rise to Fendi’s latest digital campaign. To celebrate the 10th anniversary of the Peekaboo – the structured, ladylike handbag that remains one of Silvia’s most enduring and versatile creations – the fashion house introduced the #MeAndMyPeekaboo project.

“I was thinking about a bag that appeals to me, and to her, and to her,” Silvia says, nodding toward her daughters. “It’s something that is really not attached to a group of people, but is a beautiful object that different generations can wear.”

Delfina nods. “The Peekaboo to me is like jewellery, because it can be passed down through generations. It can last; it can travel.”

Illustrating the design’s heirloom potential is a multi-generational cohort of style stars. A video, released as part of the project, depicts Kris Jenner, Kim Kardashian and her daughter North West frolicking in a Malibu meadow, each toting her own Peekaboo bag. It’s the Kardashians with whom Silvia feels the clearest affinity.

“They remind me a bit of my family – the strong matriarch, the children, the little children, and private and public life all mixed up. I like that,” she says. “They are definitely strong women, for sure, and that’s interesting.”

They’ve also proven themselves unparalleled fashion influencers – a photo of Kylie Jenner pushing infant daughter Stormi in a customised Fendi pram while wearing a Fendi bodycon dress and bumbag has racked up more than 9.5 million likes on Instagram.

It’s one of the factors credited this winter with pushing Fendi to number eight on the list of the world’s top 10 most-coveted fashion labels, up from 17th the previous quarter, according to global fashion search platform Lyst.

“I know that [the Kardashians] are controversial. They can be. But I also like the fact that Kim went and used her influence, for instance, to see Mr Trump for justice, for a good cause,” Silvia says. “And then there’s a link with Kanye, who is a good friend.”

In 2009, West, along with Virgil Abloh, now the Louis Vuitton menswear designer, undertook a sixmonth internship with Fendi. “I think he [West] learnt how professional the fashion world is, and how big the commitment is. Sometimes from the outside you cannot perceive it. It’s like music: everything seems so easy and so light, but there is a lot of work.”

Pre-Kylie, pre-Kim and pre-Kanye, of course, came the Baguette bag, introduced in 1996, when Delfina was becoming aware of fashion. “I was so attracted to this bag, but I wasn’t the right age to wear it,” she says, shaking her head. “The first Baguette she [Silvia] let me steal was the denim one. We kind of made this compromise that ‘Okay, you can wear it because it’s denim, so it looks right for your age.’ ”

When Fendi had the foresight to loan a few Baguettes to an up-andcoming TV show called Sex and the City, an It Bag was born. The slim shoulder bag, in a seemingly infinite range of finishes, became the smash that brought LVMH courting (the luxury conglomerate acquired Fendi in 2001). The Peekaboo, meanwhile, introduced in 2008, marked a distinct change from its predecessor. “It really went against the Baguette, in a way,” Silvia says. “I said, ‘Let’s go back to something very classic, something made of leather, something ladylike.’ ”

So, what’s Silvia planning for her next great handbag hit? Any hints?

“No pressure!” she laughs. “Well, everything is becoming more compact – we need less. So probably a small bag, or something integrated into a garment.” She takes a beat to reconsider. “It is difficult for me to just give this tip to readers. Maybe I can write in a closed letter and you will see in a few years, ‘Oh, she was right.’ ”

Her daughters exchange a look and a nod, as if wordlessly saying, “What crocodile Peekaboo? I’ll race you to borrow that.”

This article appears in Sunday Life magazine within the Sun-Herald and Sunday Age on sale October 7.