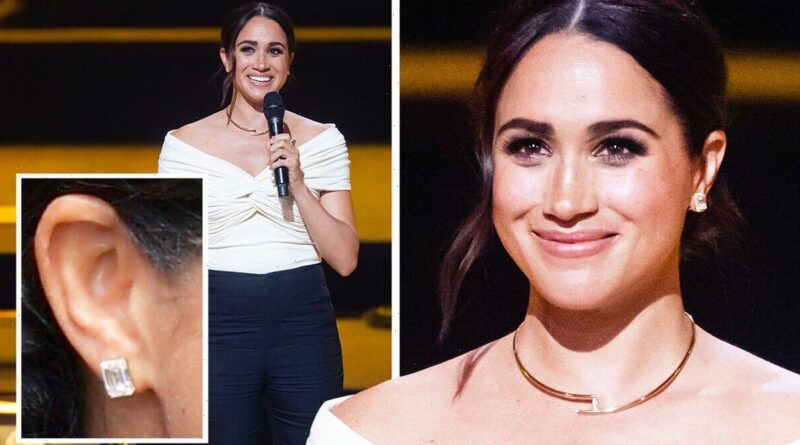 Meghan Markle took to the stage at the Invictus Games’ opening ceremony last weekend. The Duchess of Sussex caused a stir with the Cartier necklace she wore, but many royal fans failed to notice the large diamond studs she had chosen. Express.co.uk spoke to Steven Stone jewellers about these earrings

“From Princess Diana’s Cartier watch to a sensational Cartier necklace, she has some very sentimental, not to mention valuable, pieces in her collection.

“At the Invictus Games opening ceremony, Meghan also sported a pair of sensational diamond earrings which added an extra touch of sparkle to her outfit.

“From analysing the images, these earrings appear to feature very high quality emerald cut diamonds which could be around 2.5 to three carats each.

“The stones are set in white gold and are likely to be worth an estimated £350,000 on today’s market.”

As for who designed the earrings, royal fashion spotters have suggested they are by Lorraine Schwartzman and are said to be emerald cut diamond jacket earrings.

This isn’t the first time Meghan has worn the earrings, she debuted them back in June 2019 for the Trooping of the Colour.

Then, a month later, Meghan had them updated to match her outfit for the Lion King premiere in July 2019.

For the event, the jeweler updated the earrings with removable onyx jackets.

The onyx jackets were not featured on the studs for Saturday night’s outfit.

Alongside the diamond studs, the Cartier necklace has a price tag of £12,800.

This is said to be the most expensive, new item of jeweller Meghan wore from all of her Invictus Games appearances.

On Meghan’s wrist was Princess Diana’s Cartier watch and a Cartier ‘Love’ bracelet, which she has worn several times before.

Princess Diana’s tennis bracelet was also featured and photographs also suggested the Duchess had a new diamond tennis braclet on the same wrist.

Meghan also showcased a new ring on her right hand index finger which was visable when she held the microphone to make her speech.

It appears to be a trinity knot style in gold and diamonds.

In terms of fashion choices, Meghan wore a lot of white or cream over the three days.

Celebrity psychic Inbaal Honigman commented:” The colour white in and of itself sends a message of peacefulness.

“In my mind, it’s also linked with the location because The Hague is obviously a center of lots of international associations that deal with and encourage and try to control world peace.

“I feel like the entire message of Meghan Markle wearing white at The Hague is a message of peacefulness and unity.”