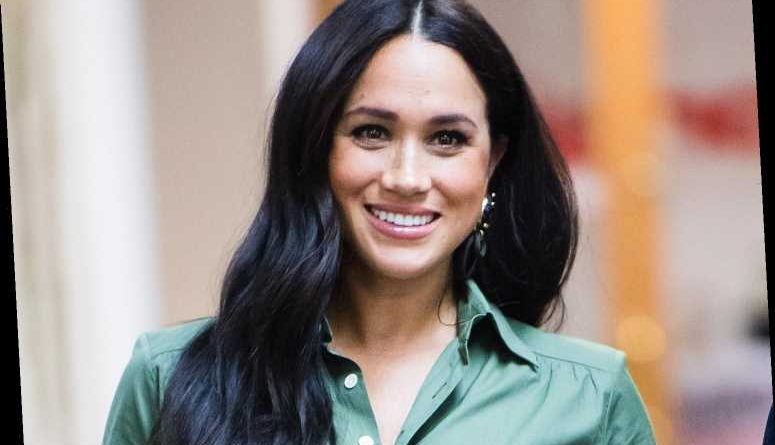 We don't know what's cuter: Meghan Markle's nickname for Prince Harry, or the blue dress she wore while Facetiming with him and James Corden while the two made a pit stop at the Fresh Prince of Bel-Air's mansion during their Los Angeles tour.

We're partial to Markle's sartorial moments, so we'll have to say the former takes the cake. Though not much could be seen of the soon-to-be mom of two, we did get a glimpse at her long, wavy locks, effortless no-makeup makeup, blue pendant necklace, and what appeared to be a smocked bodice dress, a trend that's been gaining lots of traction as of late for its particularly flattering nature.

Though the actual brand behind Markle's blue top/dress moment is still unknown — and we might never be 100 percent sure, because we haven't seen it in its entirety, though L.A.-based Velvet Torch identified the dress as its design — one thing is for certain: Markle is going to make every smocked mini, midi, and maxi sell out lightning fast. Low-stock alerts are already popping up on similar styles at Nordstrom, Nordstrom Rack, and Amazon. There's something so easygoing about a smocked piece. If you're unfamiliar with the design, here's a quick rundown: Smocking is a type of embroidery technique that consists of gathering fabric together to create an elasticized effect. The end result? Material that's stretchy, oh-so-comfy, and ultra-flattering. As such, it's fitting this silhouette made it into Markle's maternity wardrobe.

The internet is chock-full of smocked goodies that you'll want to wear all spring and summer. There's this super-cute midi from Amazon-loved The Drop, which has a smocked bodice and long bell sleeves that make it a great transitional piece. This smocked eyelet number from ASTR the Label is also a 10 in our book (just look at the thigh slit), as is this super-cute blush mini with trendy puff sleeves. And of course, we can't forget to call out the Nap Dress from Hill House home that's so popular, 267 sold a minute last year.

Prepare to see a lot more of the smocked dress as we enter the warm weather season. And if you don't want to miss your chance at wearing the ultra comfy, ultra flattering, romantic staple that'll make you look put together with very minimal effort, shop it below today. Buy It! The Drop Ella Off the Shoulder Tiered Midi Dress, $59.90; amazon.com