A MUM has sparked a fierce debate online after claiming only ‘wealthy’ and ‘middle class’ people have real trees.

As Brits decorate their trees as Christmas approaches, one woman revealed she only ever has a fake, but claimed people are often ‘snobbish’ about it. 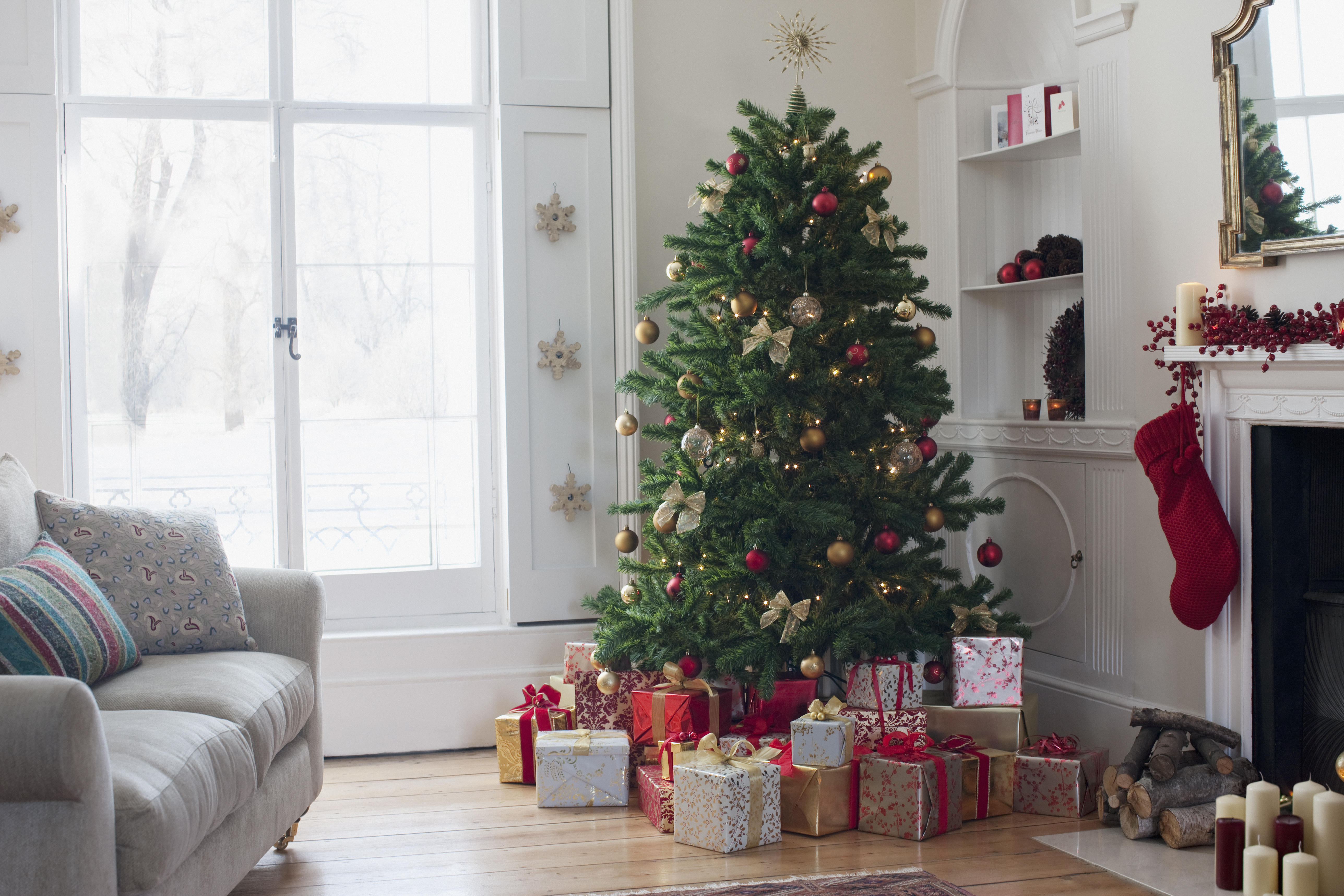 The woman, from Scotland, said she grew up in a working class family, and didn’t know anyone who had a real tree.

But after chatting with people at her work, she revealed they were ‘horrified’ at the thought of a plastic spruce.

She shared her opinion on Mumsnet, where it’s sparked a heated debate.

The mum wrote: “It seemed to me that there was a bit of 'snobbery' against those who had artificial trees (maybe that's just where I work!). 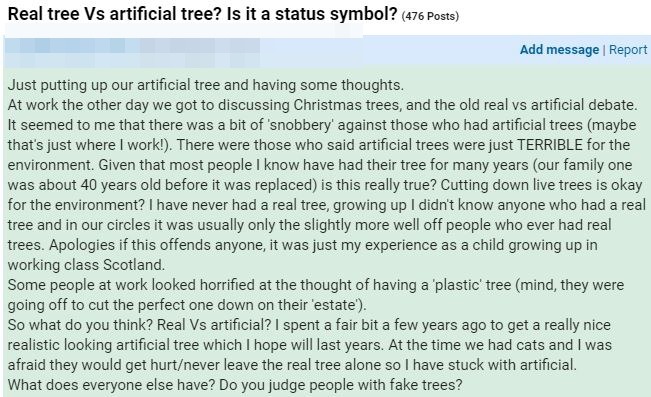 “There were those who said artificial trees were just TERRIBLE for the environment.

“Given that most people I know have had their tree for many years (our family one was about 40 years old before it was replaced) is this really true?

“Cutting down live trees is okay for the environment? I have never had a real tree, growing up I didn't know anyone who had a real tree and in our circles it was usually only the slightly more well off people who ever had real trees.

“Apologies if this offends anyone, it was just my experience as a child growing up in working class Scotland.

“Some people at work looked horrified at the thought of having a 'plastic' tree (mind, they were going off to cut the perfect one down on their 'estate').”

She revealed she’d splurged on a lovely faux tree a few years ago, which she was still using today.

The mum added: “I spent a fair bit a few years ago to get a really nice realistic looking artificial tree which I hope will last years.

“At the time we had cats and I was afraid they would get hurt/never leave the real tree alone so I have stuck with artificial.

“What does everyone else have? Do you judge people with fake trees?” 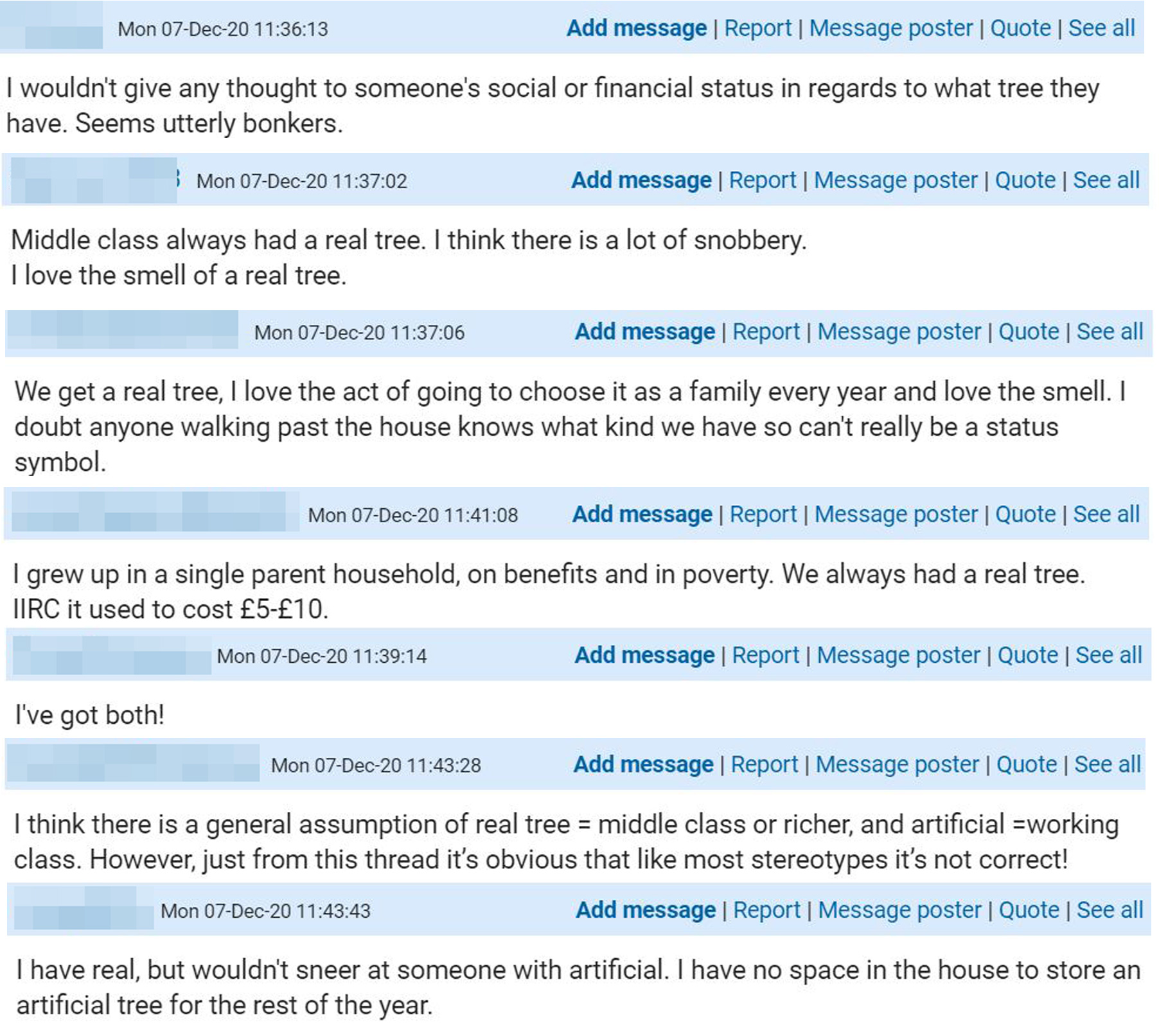 Her post has divided opinion, as some people who claimed they were working class admitted they always have a real tree, while others opted for an artificial one.

The post has racked up nearly 500 comments as people waded into the debate, with one person saying: “Working class, always had a real tree.”

Another said: “Dunno. Solidly middle class family. Always always had and have a real tree.”

A third wrote: “I wouldn't give any thought to someone's social or financial status in regards to what tree they have. Seems utterly bonkers.”

Someone else admitted: “Middle class always had a real tree. I think there is a lot of snobbery. I love the smell of a real tree.”

This person commented: “I grew up in a single parent household, on benefits and in poverty. We always had a real tree. IIRC it used to cost £5-£10.”

Another person reckoned: “I have real, but wouldn't sneer at someone with artificial. I have no space in the house to store an artificial tree for the rest of the year.”

And an ex-retail worker reveals how to make fake trees look ‘bigger and fuller’ in an instant.