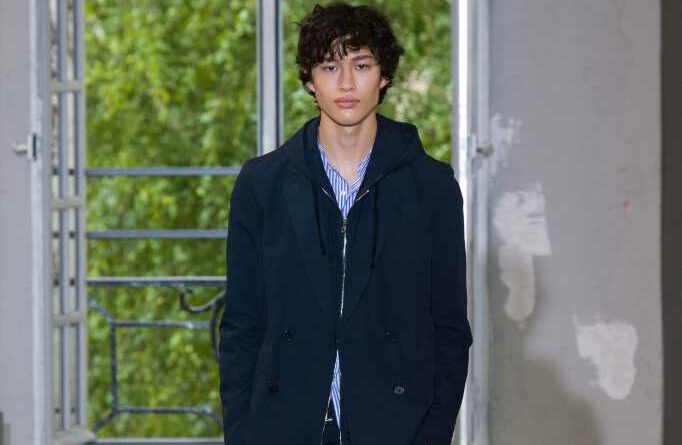 Celebrating the return of Parisians to the streets of their beloved capital, Pierre Mahéo took to the runway with a co-ed lineup that channeled the city’s nonchalant elegance and its current festive mood. The venue was a spacious historic building in the heart of the Marais district, hollowed out for renovations, with space to mingle — and reunite.

“I wanted to get back to a fashion show without any further delay,” the designer wrote in a note to guests. He went on to explain how the prolonged period grounded at home had allowed for deep exploration of his Parisian roots.

This yielded a lineup of suits and trouser-jacket combinations for spring, with plenty of options for anyone interested in riding the shorts-for-the-office trend. Plying monochromic looks, Mahéo offered them in navy, olive green, grays, ivory and an eye-catching lavender. He also wove in an extra soft, recycled denim, zip-up shirts and hoodies that edged over to the realm of outerwear, as well as leather bomber jackets, some tie-dye and a few dresses  — one printed with paisleys.

Mahéo has built his label on a contemporary approach to tailoring, working in extra ease without compromising the refinement intended by such silhouettes. Mastering the slouchy trouser, he worked in straighter cuts from the knee down this season, and included baggy, skater-style pants in a lightweight wool for summer.

“Our pants business has been on fire for the past year and a half,” he said after the show, still breathless from the emotion of the first runway presentation in 16 months. He mentioned he’s off to New York shortly. The label plans to open a store in the city, kicking off an expansion drive backed by new investors.

It might be just in time for the big migration back to work. For anyone feeling apprehensive about the return to office life, Mahéo’s got some good ideas about what our uniform should be. Dress like a Parisian!