We find out who fared better and if shaping-up works better with your partner. Naomi Manser, 47, is an events coordinator and lives in Exeter with husband Steve and their two children Scarlett, nine, and Wilson, six.

“Growing up in Australia, I used to have a very active lifestyle, swimming most days and eating lots of fruit and salads. At 5ft 2in and a slim size 10-12, I was confident about my body. But everything changed after I moved to the UK in 2000. 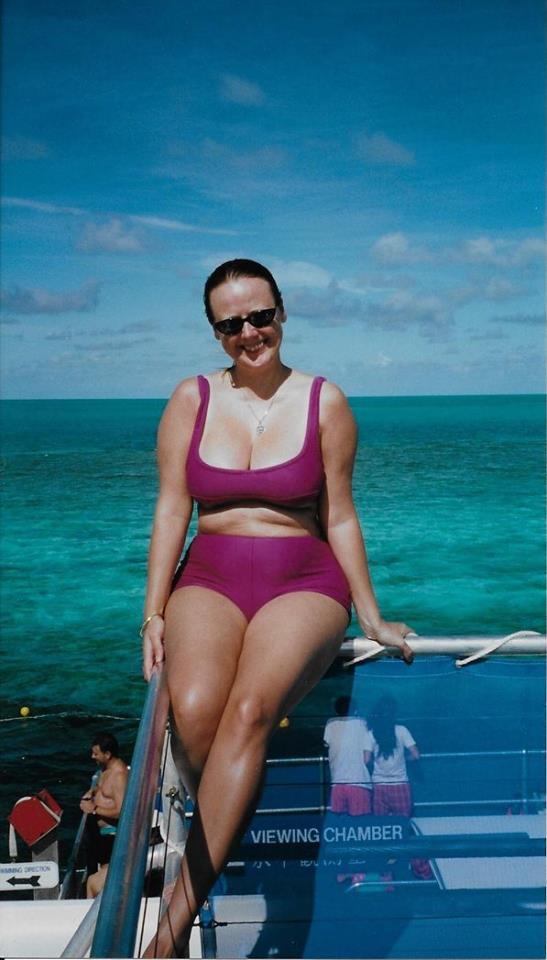 "Working as a project manager, I grew to love stodgy British food like pie and mash. Three years after I arrived in London, I met Steve in a bar. By then I was a size 12-14, but I was still happy with how I looked.

"After four years together, Steve and I started IVF, as we were desperate for a family but couldn’t conceive naturally. For the next five years, my weight fluctuated as I comfort-ate through every failed fertility treatment.

I’d joke about my weight, but my self-esteem was rock- bottom.

"In 2012 we adopted Scarlett and Wilson, and in no time I was snacking all day, picking at their leftovers and treating myself to cake on playdates with other mums. By the end of last year I was the heaviest I’ve ever been at 15st, hiding under baggy jumpers and trying not to let Steve see me naked as I felt so ashamed.

"I’d joke about my weight, but my self-esteem was rock- bottom. My children look to me as a role model, so I need to help them grow into confident, healthy adults. How could I do that if I wasn’t like that myself?”

“During the week I commute from our home in Exeter to my office in Bristol, and temptation is everywhere. It’s so easy to grab a bar of chocolate or a sausage roll from a shop at the train station, but it was these unhealthy habits plus a sedentary lifestyle that saw my weight creep up from 111/2st 10 years ago to 15st 9lb. 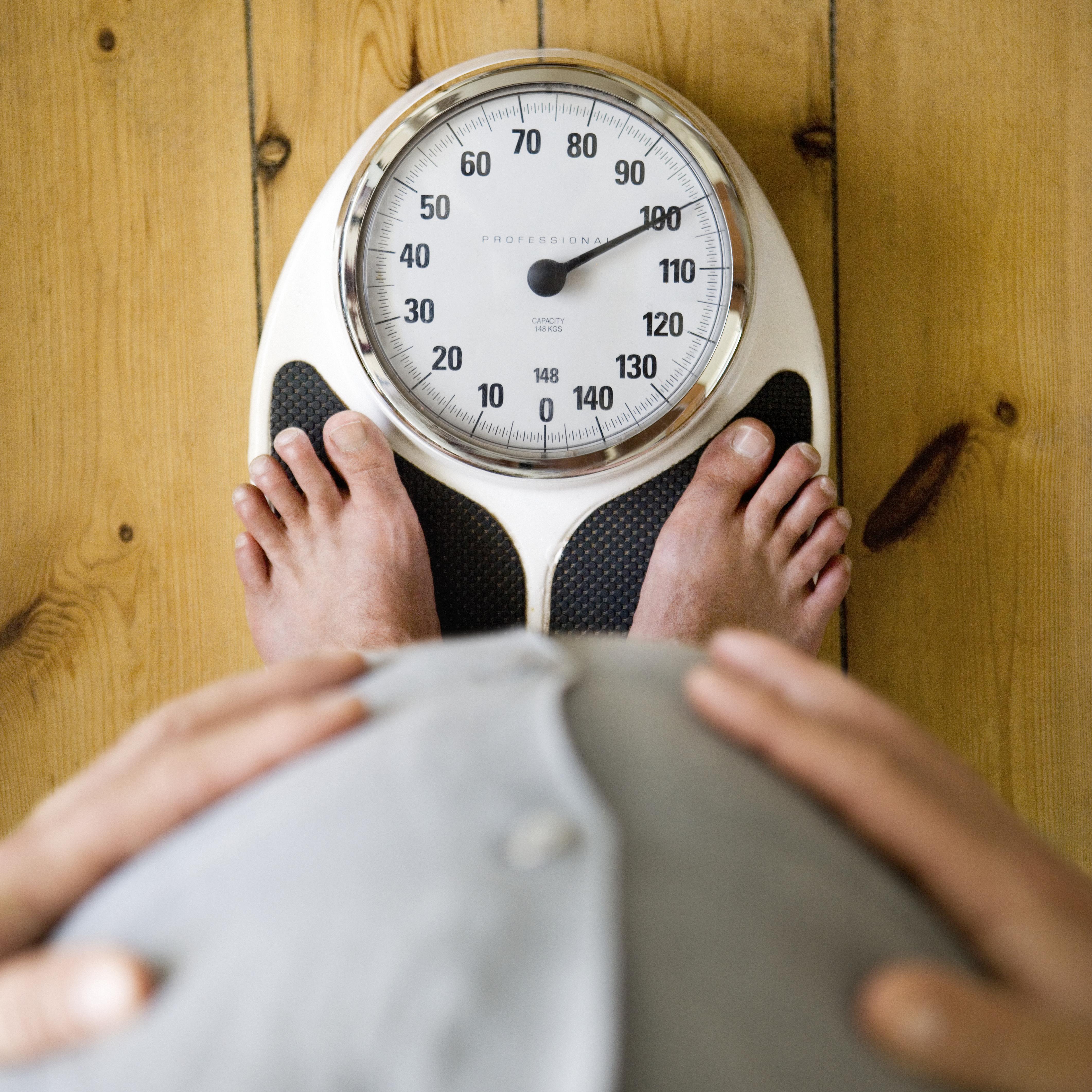 Naomi jokes that chocolate is my drug, but it’s true. If there’s any in the house I have to eat it all. It’s my downfall.

"I’m 6ft 2in, so I deluded myself for a long time that I wasn’t that overweight. But when the buttons of my shirts started to strain and I became breathless playing with the kids, I knew I had to do something.

You wouldn’t have caught me on the beach with my top off, that’s for sure.

I must admit I knew Naomi was unhappy with her body – even though she always looks beautiful to me – and I definitely felt self-conscious about mine, too. You wouldn’t have caught me on the beach with my top off, that’s for sure.

"But it wasn’t something we really talked about. Maybe if we had, we’d have done something about it sooner.”

Weight: 15st 9lb
Height: 6ft 2in
Waist: 40in
Breakfast: Nothing
Lunch: Sandwiches and crisps
Dinner: Roast with all the trimmings
Snacks: Chocolate and pasties

“At my first personal trainer consultation at Unit 7 Gym in Exeter, I realised that if I wanted to reach my goal in three months, my plan would have to be very strict.

I couldn’t be at the gym every day because of the kids and my part-time job, so my PT explained that meant really restricting my calorie intake.

"It was daunting to hear, as I hadn’t tried to lose weight for so long.

"Out went buttered toast, crisps, pasties and biscuits. Instead, I had to follow a low-carb plan with lots of eggs, vegetables and white meat for protein. 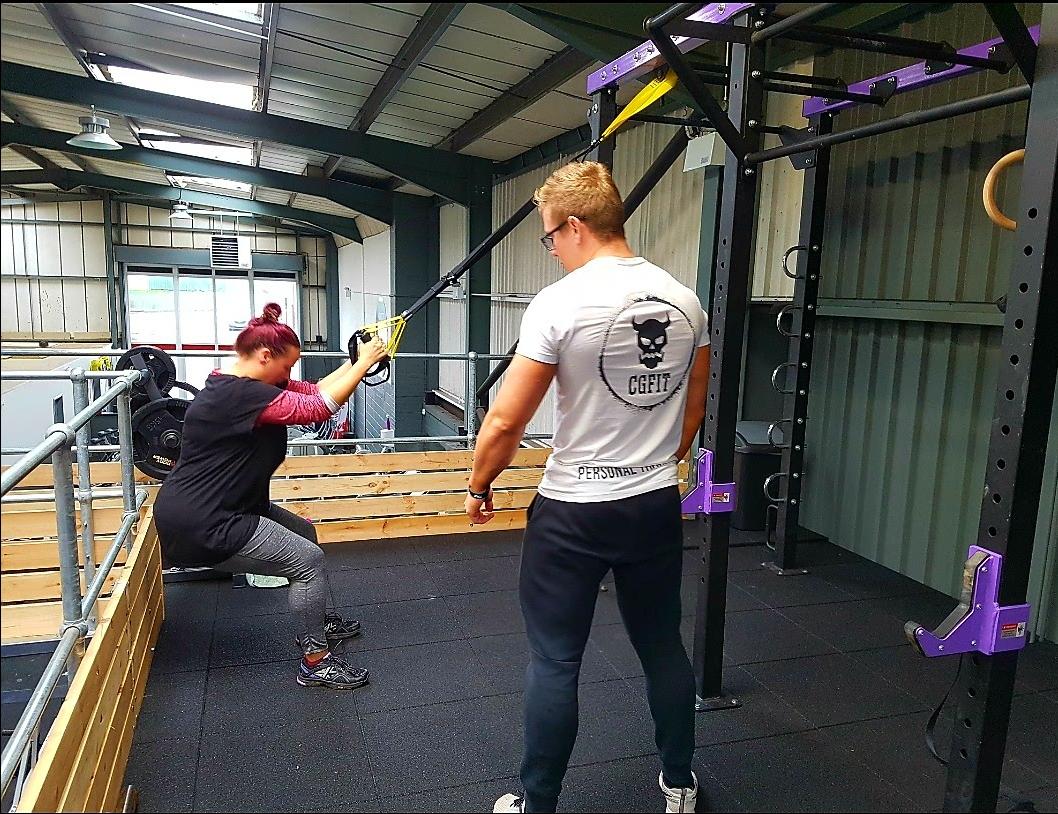 It was incredibly tough, and a huge shock to my body. I also ended up having a couple of slip-ups, including pigging out on pizza and red wine on a night out, and a cheeky Chinese takeaway one weekend. I felt a bit guilty, but realised that I needed a taste of normal life to keep going.

"I’d always told myself I didn’t have time to exercise, but I knew I’d have to make time. So at least three times a week after dropping the kids at school I would meet my PT at the gym and do 30 minutes of cardio, such as the exercise bike, then 30 minutes of weights.

"It wasn’t easy walking in at first, as I was the biggest person there. In the beginning I felt intimidated and was convinced people were staring, but as I looked around I realised they were just getting on with their own workouts.

As I hit the six-week mark I began to see that my arms and legs were firmer and I had a waist emerging.

"I was sceptical weights would make much difference to my wobbly body, but as I hit the six-week mark I began to see that my arms and legs were firmer and I had a waist emerging. Of course, there were times when I was tempted to drive past the gym and go home, but I didn’t skip a session once.

"I stepped on the scales once a fortnight. I didn’t want to be dictated to by a bunch of numbers, plus I knew building muscle can affect weight loss, but it was still amazing to see the pounds dropping off. 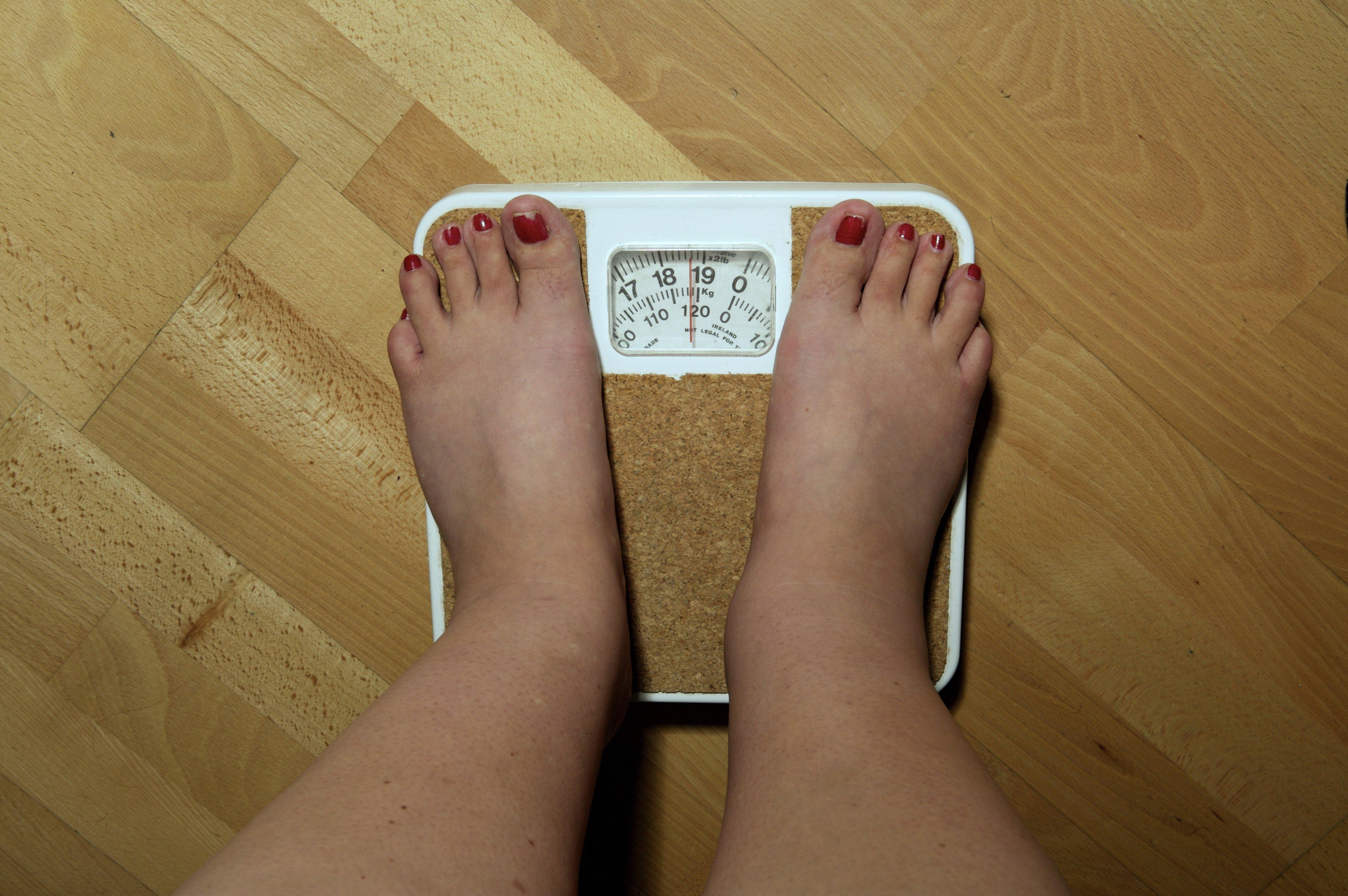 "After eight weeks, I really began to notice that my size-20 clothes were getting loose, and had to buy some new outfits.

"Around the same time, friends and family began to comment that my face was looking slimmer.

"I was ecstatic, and it gave me a much-needed boost to keep going. I also noticed I was sleeping better and felt more positive and happy.”

“When I commit to something, I give it 100%. Once I had a chat with my PT, I was absolutely determined to stick to the three-month eating and exercise plan he’d devised.

Some people might think it would’ve been easier for me because I’m not at home with the children all day, but instead I had to go to the gym at 7.30pm after a long day at work, so it definitely wasn’t a breeze.

"Immediately, I discovered my biggest challenge was meal prep. I had to think ahead and batch-cook steak, rice, avocado and turkey rashers every two to three days. 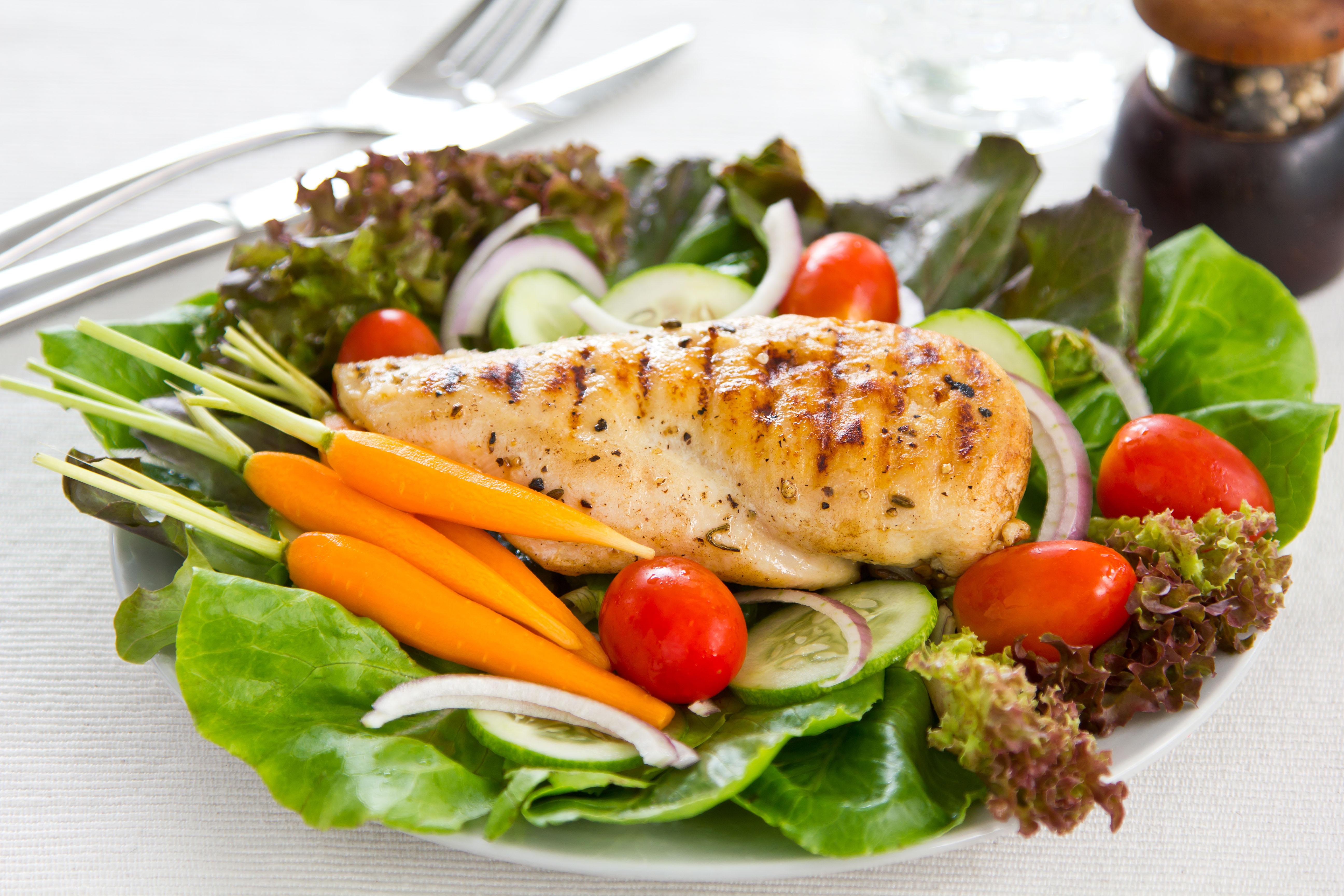 My diet was less restrictive than Naomi’s as I had less weight to lose, so I did feel guilty tucking into steak when she was having another salad, but thankfully as we were both so determined it never caused arguments.

"Ironically, I found I was eating more than ever before – in the past I would skip meals but then binge on chocolate. I actually really enjoyed my new healthy menu.

"I didn’t feel hungry, unlike Naomi who told me often she was starving. I definitely missed chocolate, but as long as there was none in the house I could cope.

"At the gym, it was a steep learning curve working out how to use the machines and lift weights safely. My regime involved four hours a week of circuits and leg and upper-body exercises using weights and my own body as resistance.

Ironically, I found I was eating more than ever before – in the past I would skip meals but then binge on chocolate. I actually really enjoyed my new healthy menu.

"On top of that, I walked the two-mile journey to the train station every morning. There were nights I was shattered and it took all my willpower, but the post-workout endorphins were addictive.

"Unlike Naomi, I stood on the scales once a week and got a real buzz from seeing my weight drop. At the start I was losing 5lb a week, but that soon slowed to 1-2lb, which my PT reassured me was normal.

"By the halfway point I had to go clothes shopping as everything was too loose, and at the end of the three months I was wearing clothes that I hadn’t taken out of the wardrobe in years.”

“If Steve hadn’t been dieting, too, I’m not sure I’d have lasted the whole three months. He encouraged me when I was wavering, and I felt a healthy sense of competitiveness to keep up with him. 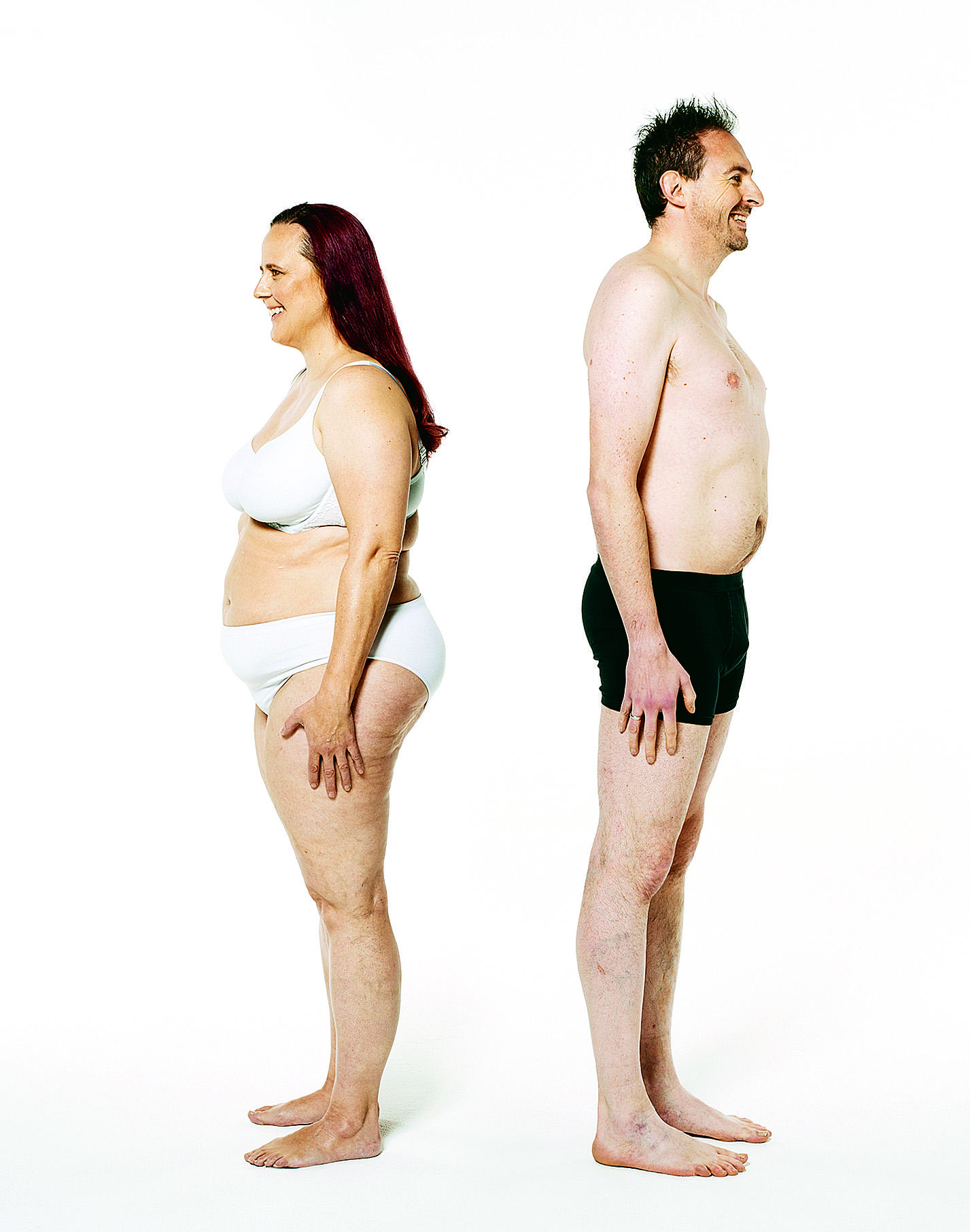 Even when I really wanted to throw the towel in, I refused because I knew I’d regret it when he was slimmer than me. I still have work to do as my new target weight is 12st, and I’d love to be a size 14, but I’m confident I’ll get there. I’ve bought a treadmill, taken up yoga and I’m still eating healthily, although I allow myself the odd treat.

"I’ll never go back to my old habit of mindless emotional eating. Now, when I meet my friends for coffee I pass on the cake, as I don’t want to undo all my hard work. I’m not quite ready to parade around naked in front of Steve, but I do feel less self-conscious. For the first time in ages I’m happy to look at myself in the mirror.”

“Even though the three-month plan is over, I’ve carried on walking to and from the station every day, and I’m still working out at the gym when I can. I haven’t quit my chocolate habit altogether, but I’m trying to have it as a treat instead of every day. My body feels firmer and stronger and I have lots more energy. I’ve still got around half a stone until I reach my goal weight of 13st, but I’m no longer self-conscious about having a wobbly belly, which is a great feeling.

I hope the new healthy me will be a good role model for my children. Naomi teases me about my newly discovered muscles, but doing this together has brought us closer. We supported and encouraged one another, and we’ll keep doing that until we both reach our next goals.”