With the vows said, the rings exchanged and their marriage sealed with a kiss, we reveal what the subtle details and interaction between the pair means. 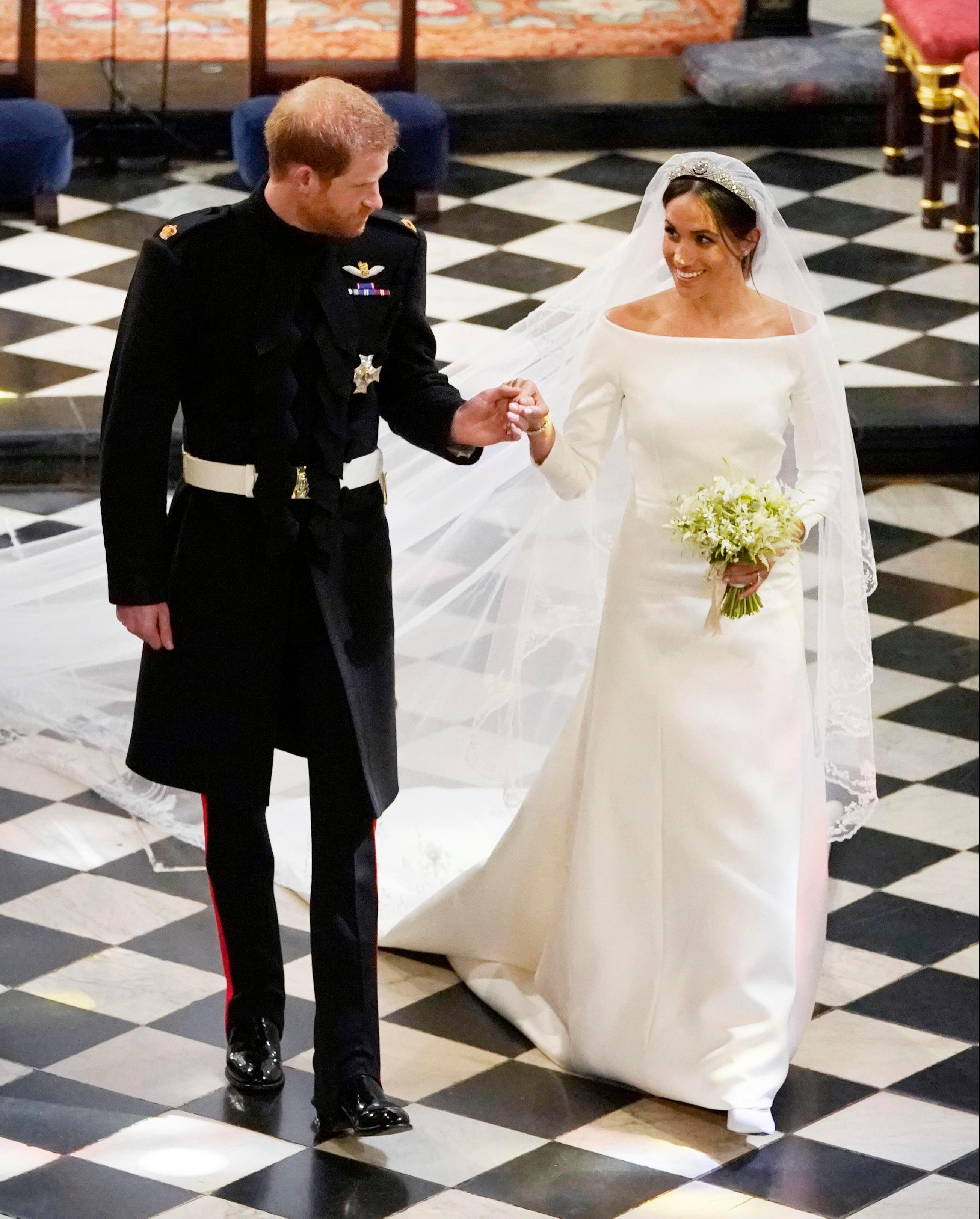 Meghan Markle and Prince Harry are officially husband and wife after a sun-soaked ceremony at St George's Chapel, in Windsor Castle.

They wed in front of 600 guests, including The Queen, with Prince Charles' walking his new daughter-in-law down the aisle.

Judi James already gave us her thoughts on how Prince Harry and Meghan’s first public kiss as a married couple compared to Kate and William’s.

Here she gives us a rundown of the couple's body language throughout the magical ceremony, and what it says about them as a couple… 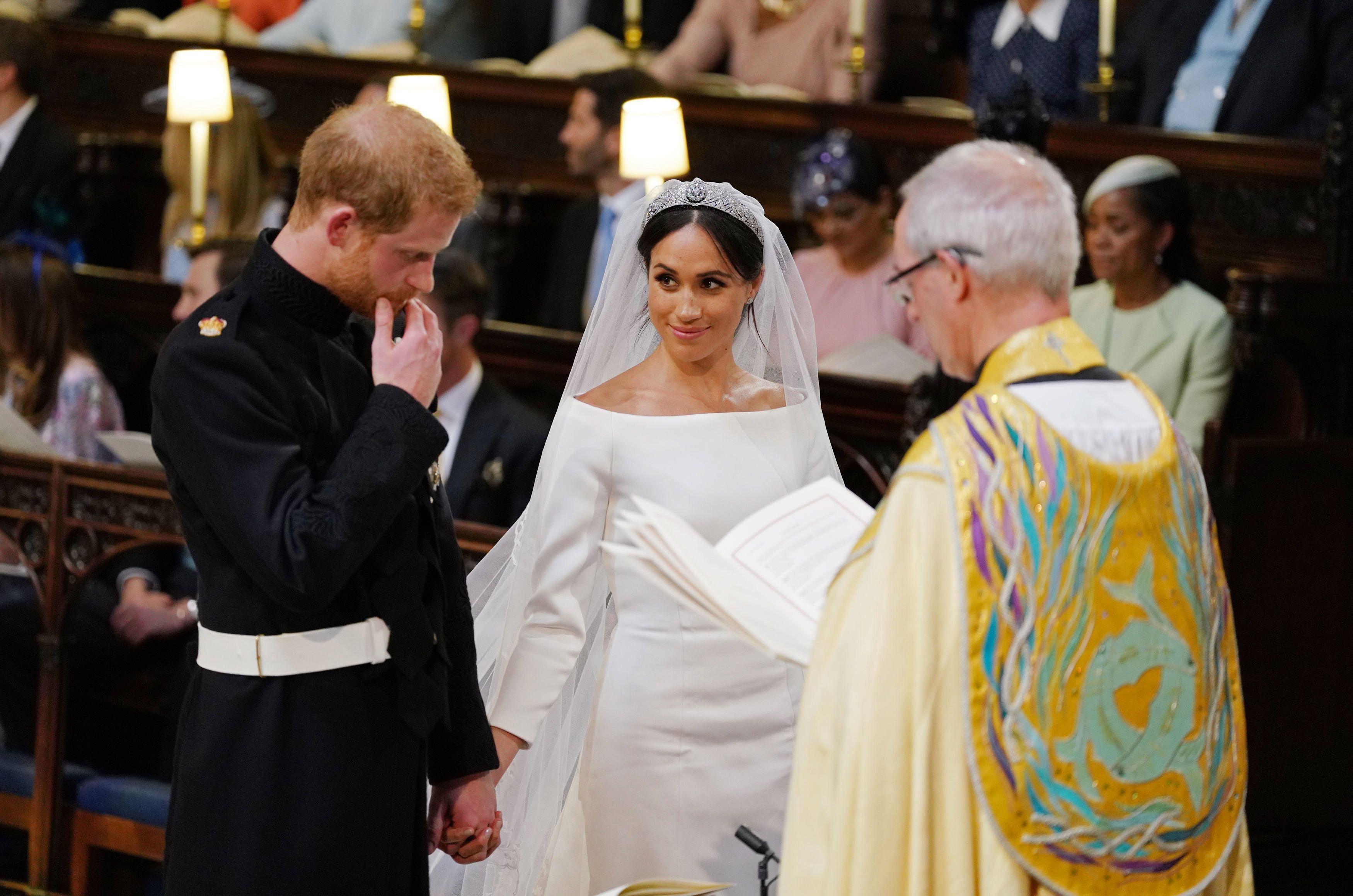 This repeat gesture used by Harry is quite a complex one with more than one purpose.

He seemed to be using it as a 'blotting' gesture, suggesting the pressure of the ceremony was causing some anxiety, leading to face sweating.

This is a common physiological response to nerves although there were moments when his face seemed to go paler with emotion too.

Harry also touched or rubbed his nose a lot as well, which could be a cut-off gesture, suggesting he would have liked the attention off himself for a few moments. The self-touch and checking rituals he used are very much a Windsor male trait.

Charles touches his cuffs and pats his pockets as a cut-off or self-calm ritual and William tends to clasp his hands into the 'fig leaf' pose.

Harry is normally an extrovert with a tendency to crack jokes and lighten the mood at the more formal royal events but because this was his own gig he may have felt less in control and more under scrutiny.

It also hints at his desire to get everything right and perfect for his new bride. 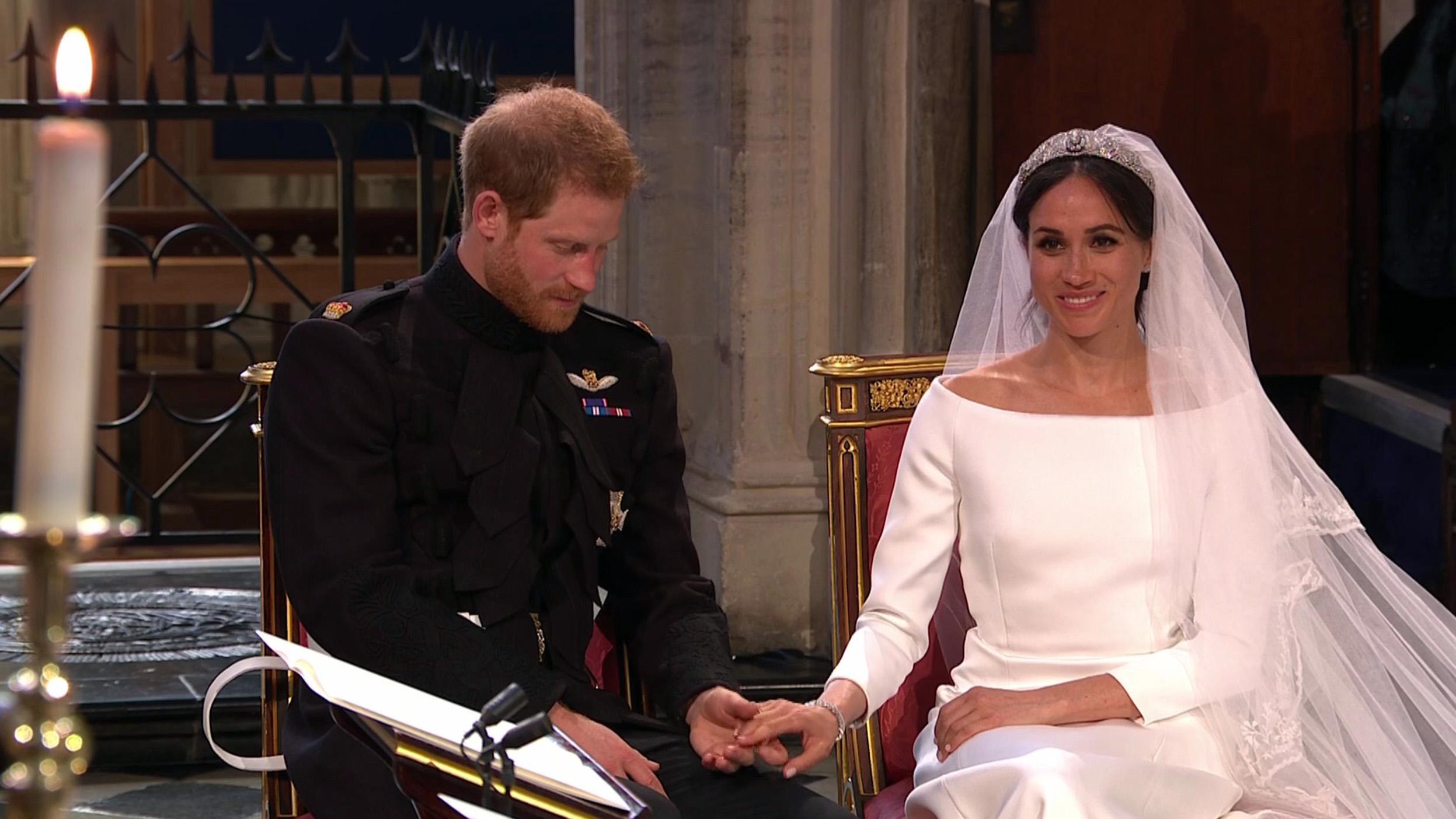 Although Harry and Meghan will clearly be at the stage of their relationship where they can't keep their hands off one another these stroking, patting and touch rituals are about more than passion.

Their huge differences in previous lifestyles means they have had to build compatibility and will probably keep doing so.

That means this constant use of touches that form tie-signs, i.e. an ongoing form of silent communication that they will use to read one another and message one another, especially when they are in public.

Meghan's upright pose looks elegant and formal here but the hand-holding will be reassuring to them both.

Harry was stroking her fingers with his thumb which would signal affection and a desire for attention that would bridge their more formal moments. 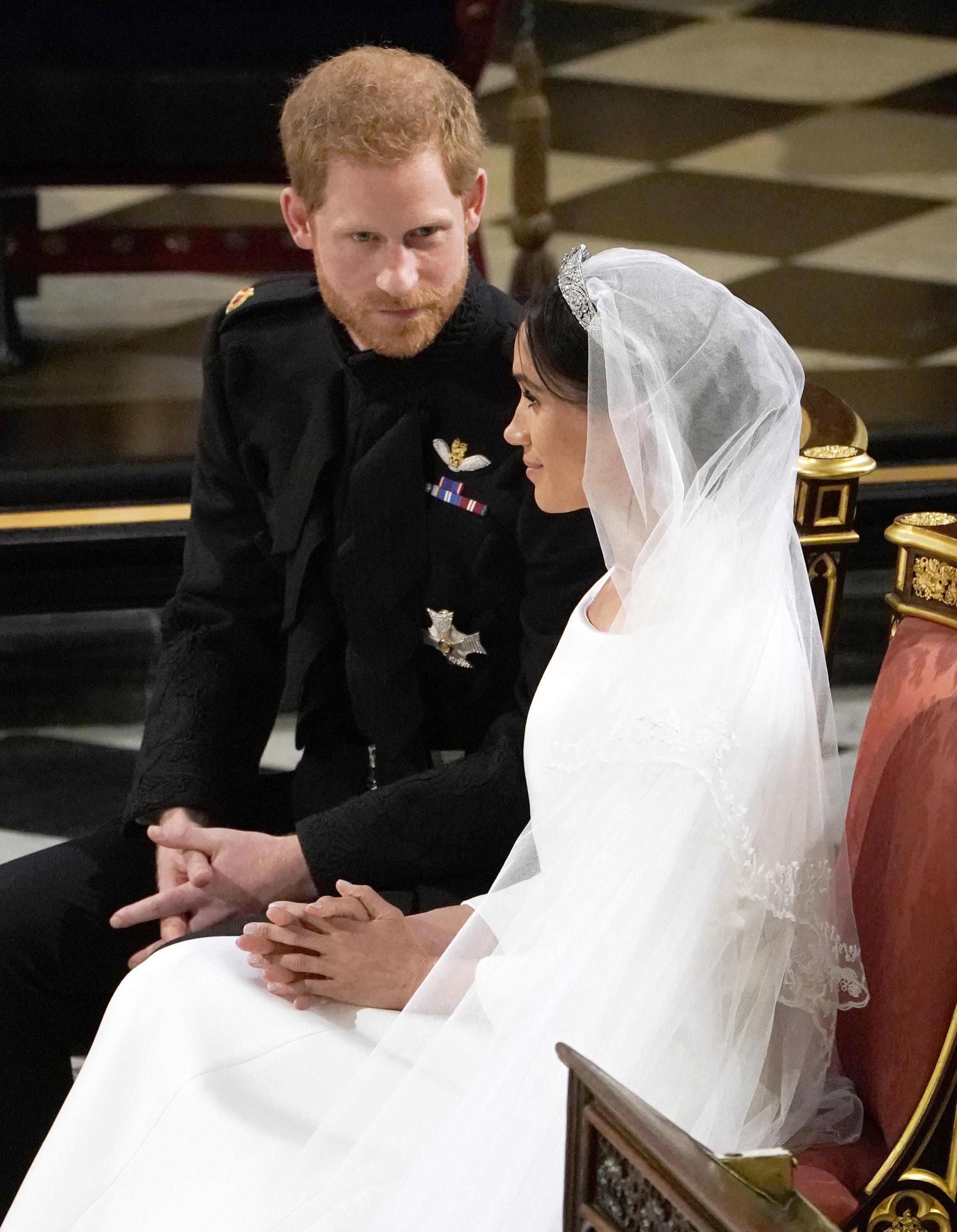 This pose perfectly defines Meghan's poise and confidence at the service.

To arrive alone to face rows of UK royals and know the eyes of the entire world are on you could easily have created anxiety signals similar to Harry's but Meghan's upright back, congruent smile and quasi-royal composure suggested she was undaunted by the experience.

Her hands didn't fiddle in her lap, she barely checked her incredibly long veil and she smiled at the guests like a host rather than a jittery new bride.

Her levels of confidence seemed to sustain Harry who sits here with a less assured posture, gazing down as though lost in his own thoughts or emotions. 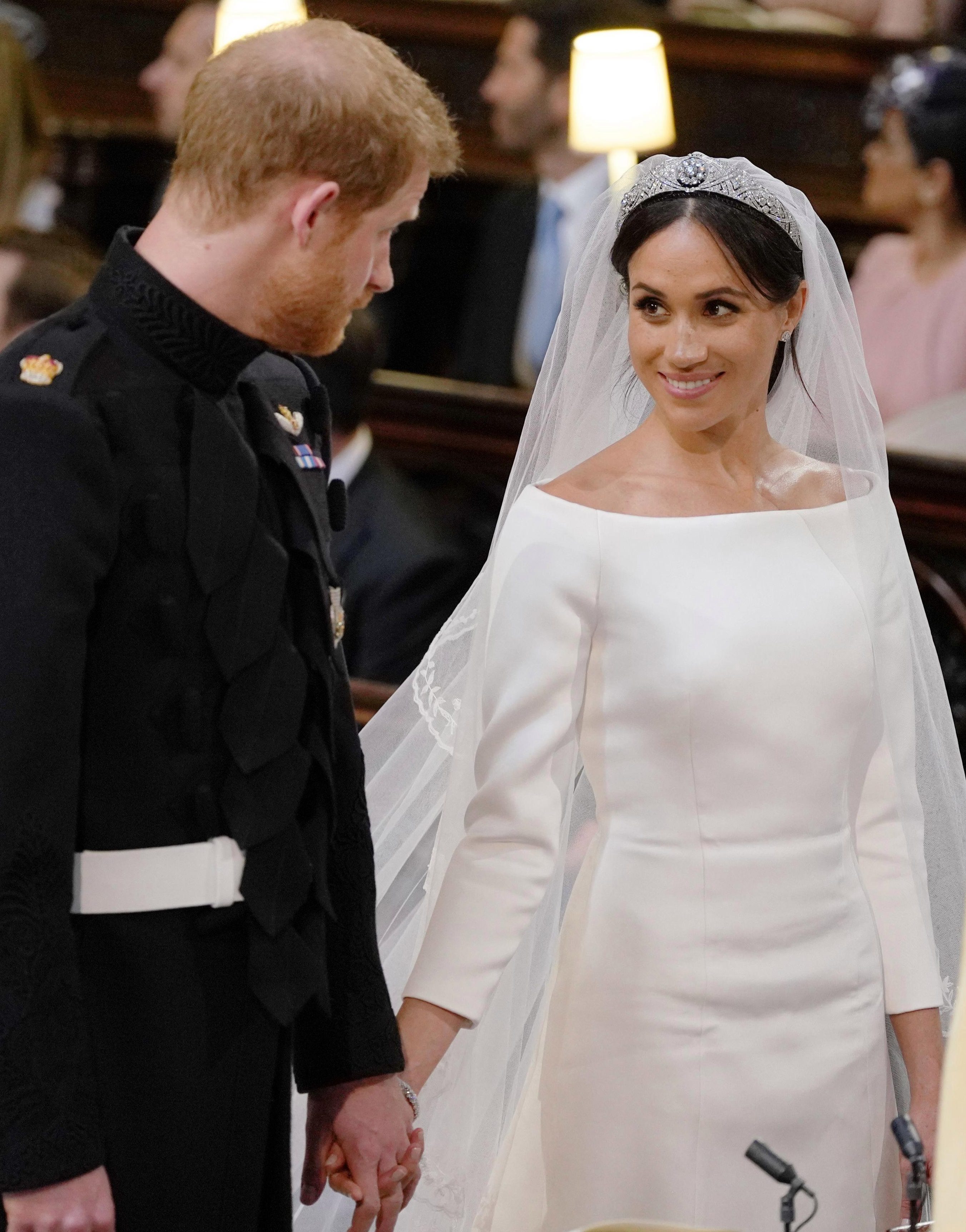 Meghan has shown on their previous visits that she will use sustained bouts of up-close eye contact to both flirt with and flatter Harry but her trait was used during the wedding to almost bathe him in love while allowing for some powerful non-verbal communications between the pair.

With their mutually dipped heads and meaningful eye contact here Meghan and Harry are performing a strong tie-sign, i.e. 'speaking' silently to one another to add depth to the vows they are taking.

As a gesture it suggests mutual empathy and rapport which is a vital aspect of their relationship as – unlike William and Kate, who perform strong mirroring to signal a natural like-mindedness – Harry and Meghan present as two strong individuals who are bound by their love for one another and their mutual objectives rather than thoughts and experiences they have in common.

These eye-watch signals will be the tie that binds in their relationship, along with their tendency to be tactile. 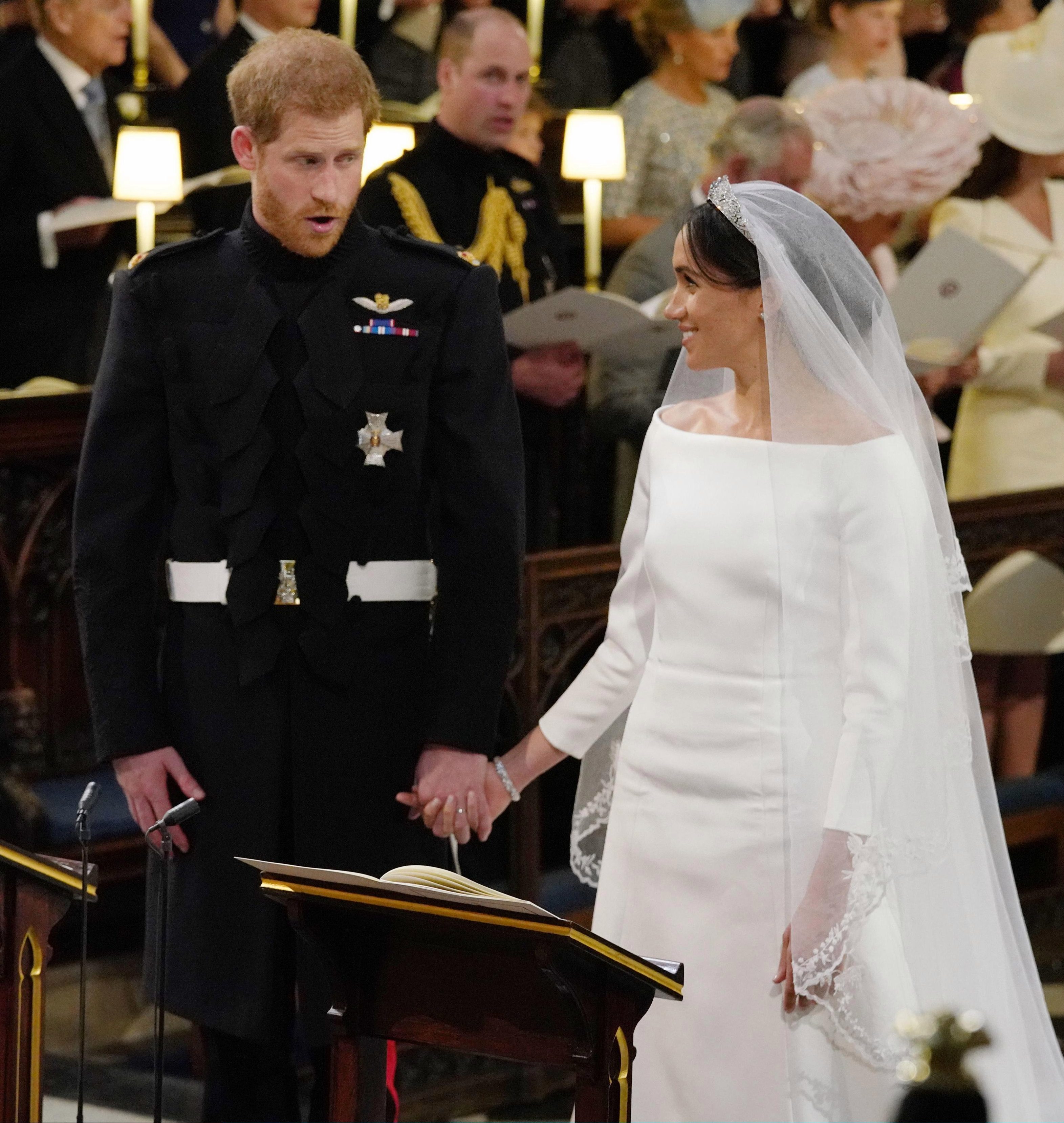 Harry and Meghan showed their hugely tactile and more relaxed style when they held hands during the ceremony.

With the fingers entwined this would have formed a strong gesture of rapport as well as love but it also creates a direct link for silent communications between the two. 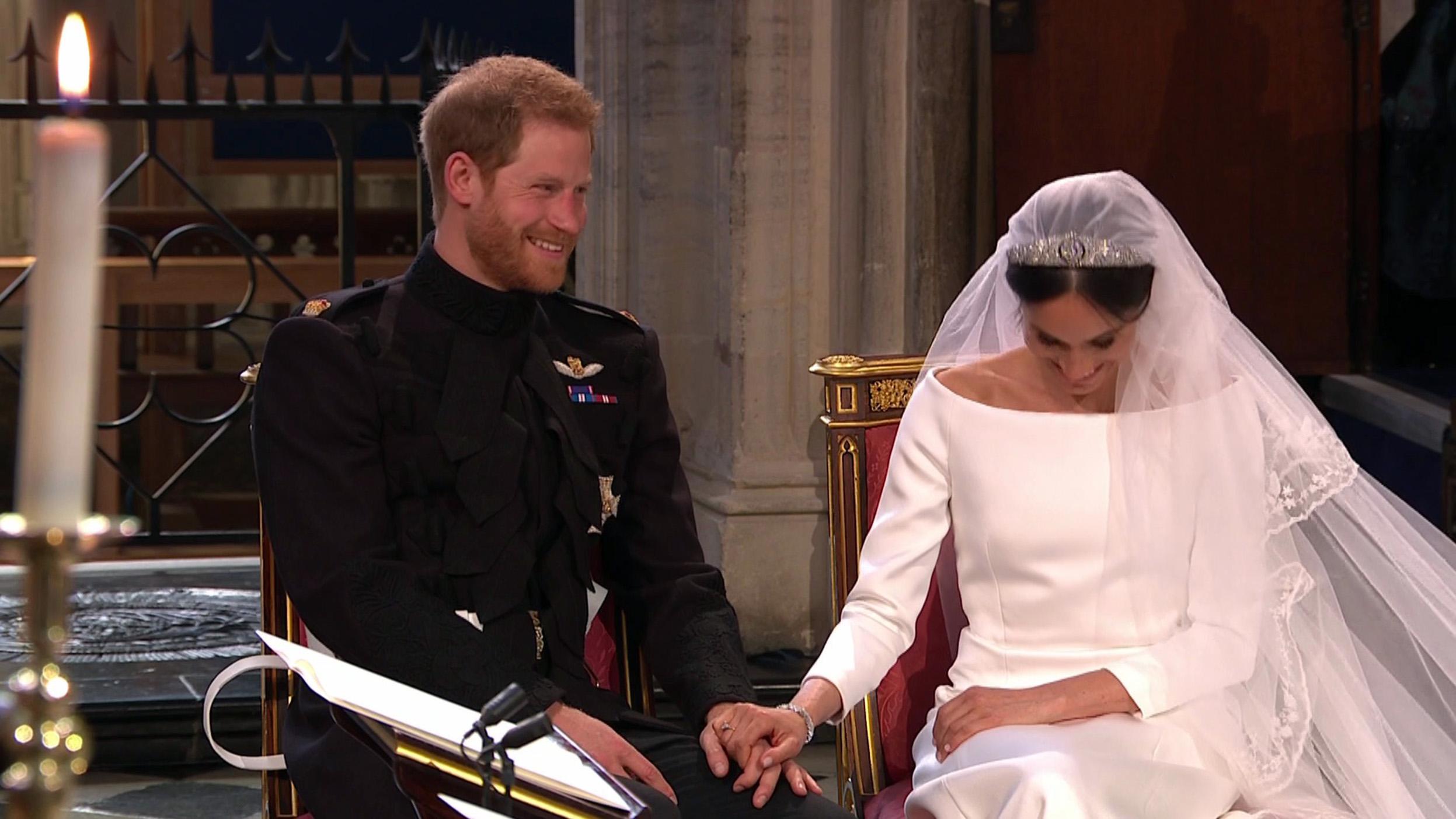 The strongest mirrored response between the couple is their intensely loving and passionate eye-gazing but creeping into second place is twinned laughing like this.

Meghan has tended to use eye-gazing and smiles to bond with Harry but her shared laughter with him increased at the wedding.

The pressure of the day probably made them both glad for a moment like this when they could smile or laugh in unison but it will be a powerful bond in their future relationship as Harry has always been a man who adores to make people around him laugh or giggle.

Harry was struck by her beauty as she approached the altar, telling her she looked "amazing".

Meghan became the first ever Duchess of Sussex after tying the knot with Prince Harry, while he will be known as the Duke of Sussex.