MILAN — Digital or not digital? That was one of the dilemmas designers pondered while approaching the latest fashion season and the best way to present their collections.

Although the COVID-19 outbreak slowed over the summer and offered a glimmer of hope in some of the fashion capitals in September, brands still had to scale back their usual arrangements and many veered toward digital formats. But were these less of an effort — both in production and budget terms — compared to usual runway shows?

Not so fast. Even though the term digital evokes immediate, easy-to-access scenarios, on average these presentations were not simpler — or cheaper — to implement and the budgets allocated for the projects often matched those for physical shows.

Clearly costs ranged according to the variety of formats that fell under the big, digital umbrella. Intuitively, runway shows set up behind closed doors and livestreamed or recorded to include edgier director’s cuts, close ups and slow-motion effects didn’t differ much from traditional ones. On the one hand, budgets were reduced due to the lack of audience attendance and security staff and optional expenses for catering and other things. But on the other, investments in production, set design, casting, makeup and hair teams remained the same, with additional costs piling up for camera and video equipment and their operators.

“The investment has been almost the same, especially because the Giorgio Armani runway show was organized anyway, even if with no public, and in addition it was introduced with a documentary based on archival contents and with the voiceover by actor Pierfrancesco Favino. We just allocated financial resources in a different way,” confirmed Giorgio Armani. In September, the designer broadcast his namesake spring 2021 collection on primetime on Italy’s La7 channel, as well as on armani.com, on the brand’s social networks and on the Italian Chamber of Fashion’s platform.

While the cost was the same, the move repaid the brand in terms of reach. “We got an incredible feedback by the general public and by people who are interested in fashion. What I find interesting about the digital medium is that it can bring fashion to the masses in a very democratic way,” Armani explained.

Yet the designer shied away from comparing traditional runway shows and digital projects as “every medium offers different challenges.”

“The traditional runway show is a consolidated format conceived for fashion professionals. The digital format is still a work in progress and is for a global community. It needs to combine information and entertainment in a short timeframe. There is much that can be done to improve it for the future. The real challenge is to create something beautiful and engaging, where at the same time clothes can actually be seen. It requires a lot of work and attention,” he said.

When these two elements were combined, brands also benefited from digital formats in terms of a refreshed image, in addition to higher engagement with final consumers.

For instance, the Emporio Armani short movie that received “a highly positive feedback through the brand’s social media accounts,” said the company, helped rediscover the label’s authentic spirit by involving a cast of young talents that moved and danced across an imaginary city.

Directed by Manuel Emede and Nicolò Cerioni, the video featured cameos by a range of Netflix stars that caught the attention of a younger audience. Talents included Omar Ayuso from “Elite,” Najwa Nimri from “La Casa de Papel,” Miguel Angel Silvestre from “Sense8,” Rocco Fasano of “Skam Italia” and Alice Pagani from “Baby,” who has also fronted ad campaigns for the brand’s fragrance business. 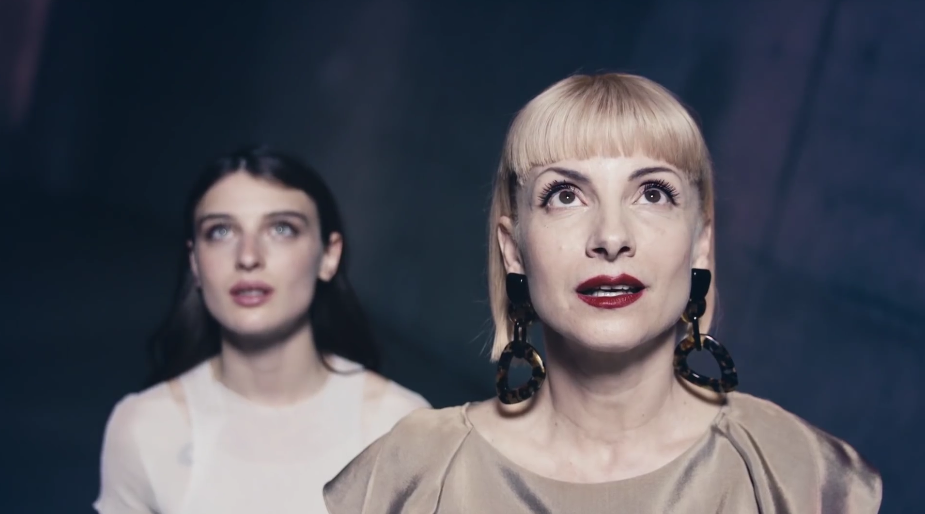 But tapping social personalities was only one way to engage with customers. MSGM checked many boxes relevant to today’s consumer when it released a candid short movie in which a range of young women were interviewed on everything from childhood memories to their idea of what love is. Self-acceptance, inclusivity, freedom of expression and self-awareness all mingled in a simple and pure way, best conveying the youthful message of the brand.

“From a creative point of view, [digital formats are] a bigger challenge. Considering the moment we are living in, we are pushed to create projects with a wider content component, which needs to be developed in a new, original and contemporary key. They need to have the power to capture the attention like it happens with a physical runway show,” said MSGM founder Massimo Giorgetti.

The designer still considers traditional shows irreplaceable in their “magic and impact,” but admitted that digital presentations are fitting the brand’s iconography better at the moment and are “what both clients and fans expect from us.” 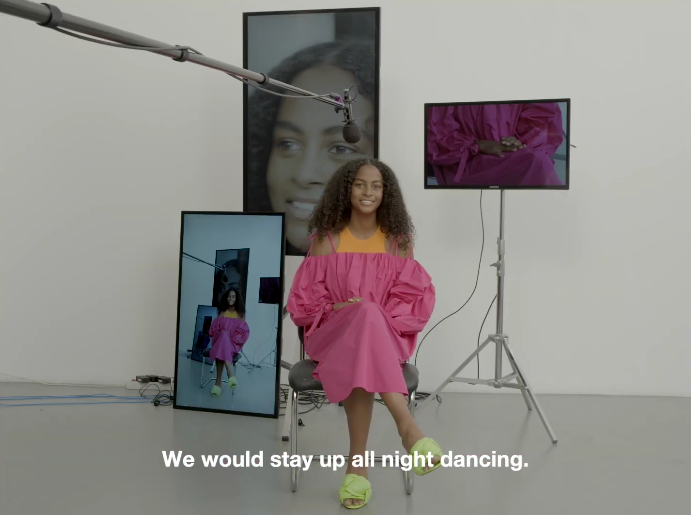 A still from MSGM’s video presentation. Courtesy of MSGM

Giorgetti explained that, in sync with the challenging times, budgets were reduced and the video cost less than that of a traditional runway show, with the company allocating the saved resources to develop b-t-b and enhance activities supporting sales campaigns instead.

“At the same time, the investment in terms of time and energy for the creation of these digital assets has been the same if not bigger than those we were making in the pre-COVID-19 period,” noted Giorgetti.

Brands such as Moschino and GCDS went the extra mile to push the envelope further, even if in two opposite directions: while the former paid tribute to old-school fashion, the latter experimented with virtual reality and gaming.

According to industry sources, Moschino’s video project cost the company even more than setting up one of creative director Jeremy Scott’s flamboyant runway shows. Referencing the Théâtre de la Mode touring exhibition of tiny Paris fashions after World War II, Scott turned to Jim Henson’s Creature Shop to bring his collection to life in miniature on 30-inch marionette models strutting down a runway staged in a charming salon, under the eyes of marionette-versions of Anna Wintour, Anna Dello Russo and Hamish Bowles, among others.

The operation was praised by buyers and press for its creativity and meticulous detail, but required a significant effort in terms of scaling down and producing the intricate mini-looks as well as the set and audience, in addition to directing and editing the film. 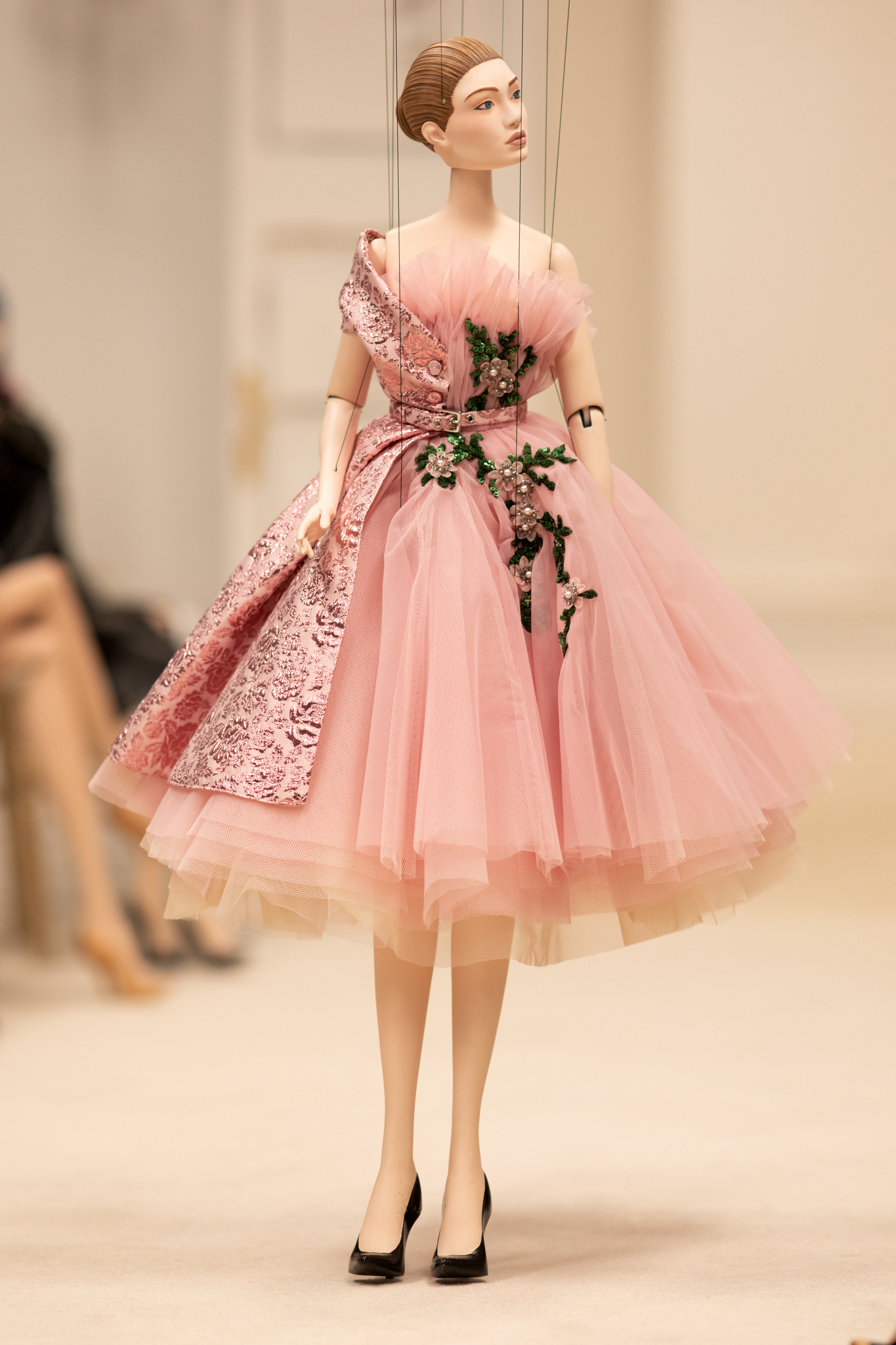 Hitting the entertainment note high, GCDS stepped into the VR and gaming arena, partnering with the “godmother of virtual reality” Nonny de la Peña and her tech firm Emblematic Group. Dubbed “Out of This World,” the virtual show featured a digital cast of shiny and doll-like avatars of different body shapes and races — green aliens included — in addition to avatar versions of Dua Lipa, Anwar Hadid and Chiara Ferragni sitting front row.

The company said in terms of production, the project cost the same as hosting physical runways shows, also because side expenses such as after party events were cut. But the realization proved to be more challenging, especially the communication among the more than 100 people across Milan, London, Atlanta and Los Angeles that were involved in the creative process, including engineers and designers mastering the rendering of clothes and complex animation techniques.

“Complex digital content has its own cost structure: generally speaking, people and objects of the collection can be more expensive depending on the complexity of achieving realistic details in digital motion, while locations or presentation environments are usually cheaper than their real life counterparts,” de la Peña said.

In addition to the digitalization of the clothes, new costs GCDS had to cover included ones for the soundtrack specifically made for the presentation, color grading and the usage rights for the image of the front row celebrities.

“When you put together a show like this you have to think about the set but also the finishing and texture of the floor, the facial expressions of the avatars, even the shape of nails of every single character. Every detail that can be taken for granted in real life has to be decided in the digital world,” a GCDS spokesperson said. 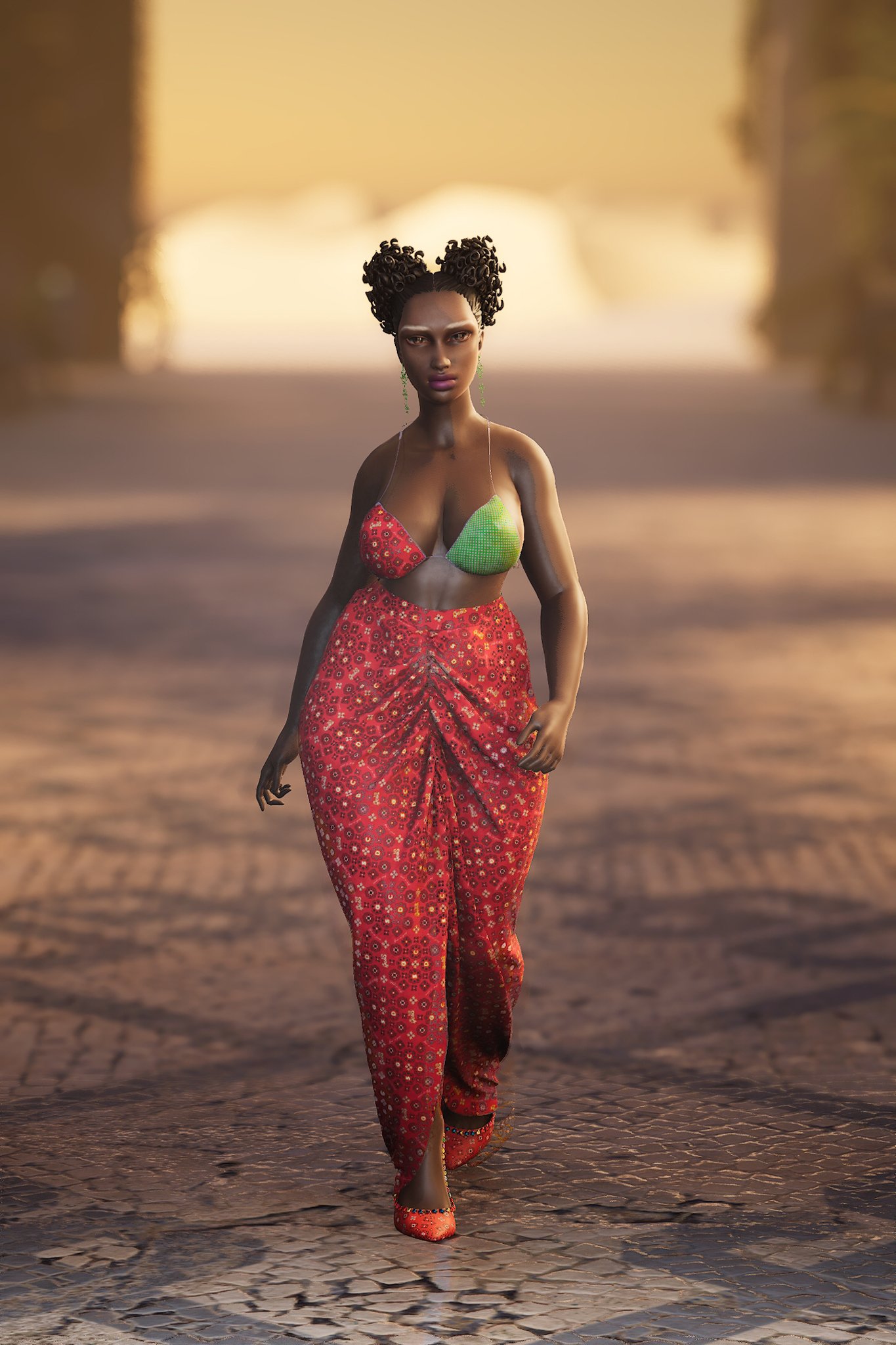 “One of the biggest challenges is that every element has to be meticulously planned in advance,” confirmed de la Peña, underscoring that in the 3-D creation and design process each stage affects the next significantly. “A model’s walk affects how the clothing is simulated, which can affect how it reacts in the light. If you don’t get something right and you have to go back it requires changes to each stage of that process. Requesting even a minor change in the way a handbag is held can force an animator to have to start over from scratch, and cost an extra week’s worth of work. A strong sense of vision is incredibly important when creating anything virtually.”

But GCDS was eventually repaid for its efforts as the company said that the return in terms of media resonance and engagement was three times the one generated by a real show, whose coverage “usually drains away in two weeks.”

Conversely, for Gabriella Mazzei, chief executive officer of the leading production company Without Production, the return and impact of traditional shows is not comparable.

“As much as the digital projects are very well-made, for me they are not able to retain the attention of viewers and risk to be more dispersive compared to physical shows. These still stand out for the empathy, emotion and vibrant energy you can experience only when you attend them and that is the added value that no video could be able to convey,” she said. Mazzei also underscored that despite the difference in reach, assessing the audience’s reaction and feedback to a collection is more immediate with traditional formats than digitally.

To fight viewers’ shorter attention span toward digital content, Mazzei urged the need of hacks that could add value to these projects and replicate the sense of community and conviviality of physical shows. She referenced the Miu Miu digital presentation that Without Production worked on, which integrated the presence of a range of the brand’s ambassadors appearing while watching the show remotely and reacting to the collection. 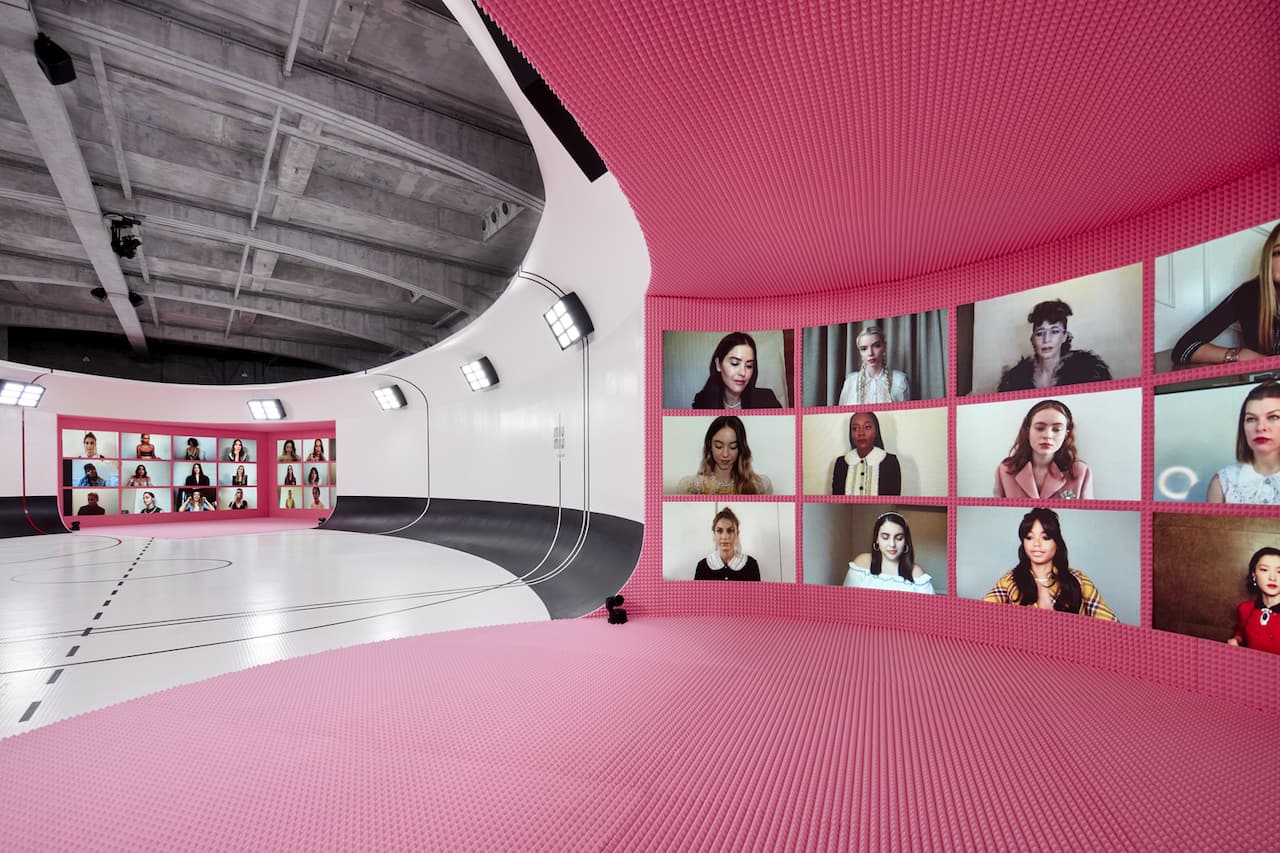 Mazzei recognized that digital projects didn’t represent a cheaper alternative, also considering that “many of the presentations unveiled in Milan were basically behind-closed-doors runway shows.”

“And even if these contents were presented via livestreaming, some brands still hosted small gatherings in bars and restaurants to watch the video with press and buyers, so those were additional budgets spent for the presentation, too,” she noted.

In addition to Miu Miu, her company produced a variety of presentations during Milan Fashion Week, including the video that marked the inaugural joint effort of Miuccia Prada and Raf Simons at Prada and the Valentino physical runway show.

Mazzei highlighted there were no specific difficulties in developing both formats, as the approach was the same. “The only difference is that maybe digital projects are more time consuming. They are not one-shot shows but recorded and you test things, shoot them, do them again. With the different camera frames and all this technology you have to give different points of views. It’s not just about a model walking back and forth. There’s a lot of work, actually even more than traditional shows,” concluded Mazzei.