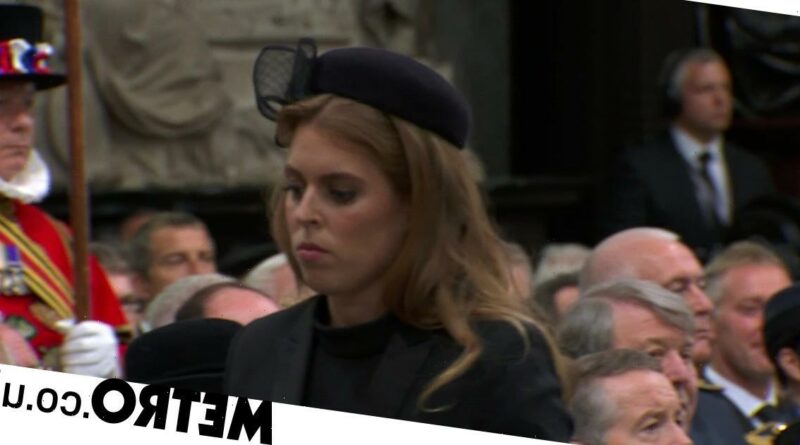 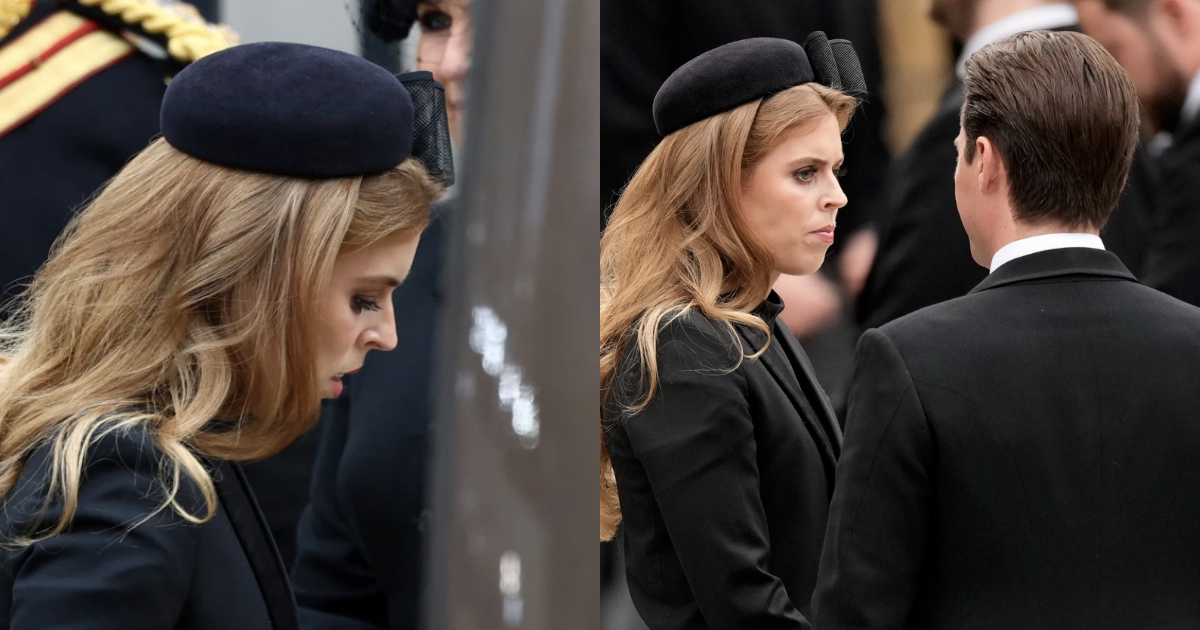 Princess Beatrice of York arrived at the funeral of Queen Elizabeth II wearing all black, as tradition dictates.

She wore a sombre black headpiece to pay tribute to her late beloved grandmother.

Donning a black jacket, dress with a matching clutch and gloves, she entered Westminster Abbey alongside her sister, Princess Eugenie and their husbands.

For the momentous occasion, Beatrice wore a small black headpiece with a lace bow at the front.

The princess wore no jewellery to the occasion which makes no surprise as she forewent jewellery for a recent family vigil at Westminster Hall also.

We believe this move of simplicity to be a mark of respect to the late queen.

Princess Beatrice had a close relationship with her grandmother, the Queen, often attending the Easter Day service and Royal Windsor Horse Show with the monarch.

Before her grandmother’s death, Beatrice often said she was ‘very, very lucky’ to have the Queen in her life, referring to her simply as ‘grannie’.

Head to Metro.co.uk’s Queen Elizabeth II tag page for the latest updates, and sign Metro.co.uk’s book of condolence to Her Majesty here.

Queen Elizabeth II was reportedly one of the first people to know of Beatrice’s engagement to Edoardo Mapelli Mozzi, and for the Princess’s wedding day, the Queen lent her granddaughter Queen Mary’s fringe tiara, which Elizabeth II had worn for her own wedding to Prince Philip.

Beatrice paired this very special heirloom with another piece borrowed from the Queen: a vintage Norman Hartwell gown that Elizabeth had worn in the 1960s.

Beatrice married Edoardo Mapelli Mozzi at the Royal Chapel of All Saints at Royal Lodge, Windsor.

Princess Beatrice has also received a new role following the death of her grandmother, the Queen.

The eldest daughter of Prince Andrew and Sarah Ferguson, has now become a Counsellor of State, meaning she is among a small group of senior royals who can represent King Charles III when needed.

However, she will be prohibited from carrying out certain duties including Commonwealth matters, appointing prime ministers or dissolving Parliament, unless she’s instructed to do so by the King.

Along with her sister Eugenie, Beatrice paid a moving tribute to the Queen following her death writing: ‘Our dearest Grannie, We’ve not been able to put much into words since you left us all.

‘There have been tears and laughter, silences and chatter, hugs and loneliness, and a collective loss for you, our beloved Queen and our beloved Grannie.

‘We, like many, thought you’d be here forever. And we all miss you terribly.

‘You were our matriarch, our guide, our loving hand on our backs leading us through this world. You taught us so much and we will cherish those lessons and memories forever.

‘For now dear Grannie, all we want to say is thank you. Thank you for making us laugh, for including us, for picking heather and raspberries, for marching soldiers, for our teas, for comfort, for joy. You, being you, will never know the impact you have had on our family and so many people around the world.

‘The world mourns you and the tributes would really make you smile. They are all too true of the remarkable leader you are.

‘We’re so happy you’re back with Grandpa. Goodbye dear Grannie, it has been the honour of our lives to have been your granddaughters and we’re so very proud of you.

‘We know that dear Uncle Charles, the King, will continue to lead in your example as he too has dedicated his life to service.

‘God save the King.

‘With our love, Beatrice and Eugenie.’