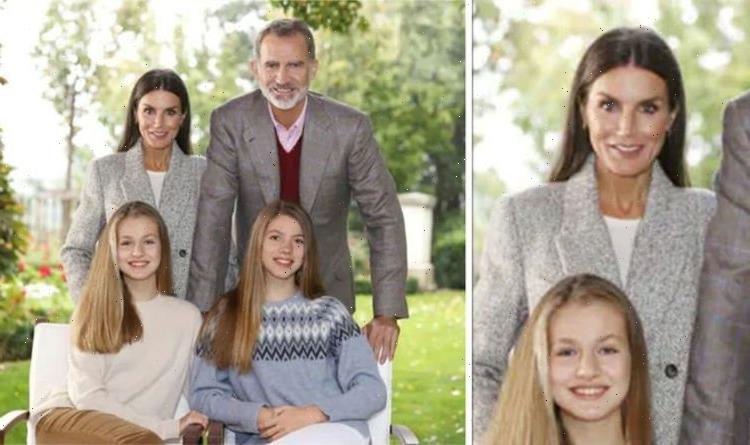 Queen Letizia is joined by Swedish Royals during royal tour

Queen Letizia, along with King Felipe VI and their daughter Princess Leonor and Princess Sofia posed for this year’s Christmas card.

Like many Royal Families across Europe, the Spanish royals have released their festive portrait.

The family have opted for simplicity and wore basic winter looks.

They look happy and relaxed in the sweet Christmas photograph.

Queen Letizia stands next to her husband while Princess Leonor and Princess Sofia are seated at the front next to each other.

The family are posing for the picture in a garden, presumably in the Zarzuela Palace in Madrid.

The Zarzuela Palace is the main residence of the Spanish royal family in the capital.

Queen Letizia is wearing a simple white T-shirt and a grey coat.

She has her hair down around her shoulders and is donning a pair of small gold earrings.

For makeup, the monarch opted for a natural look with a dash of mascara.

Her sister Princess Sofia wears a blue sweater by designer Yerse and white trousers. She sported the same jumper last year for an official visit to Pueblo Ejemplar, in Spain.

Princess Leonor joined her family in the traditional photograph as she has returned home in time for Christmas as the future queen of Spain is currently studying at UWC Atlantic College in South Wales.

Last week, the Duke and Duchess of Cambridge released their Christmas card where they looked happy while posing with their three children: Prince George, Princess Charlotte and Prince Louis.

The picture was taken in Jordan where the family were enjoying a holiday earlier this year.