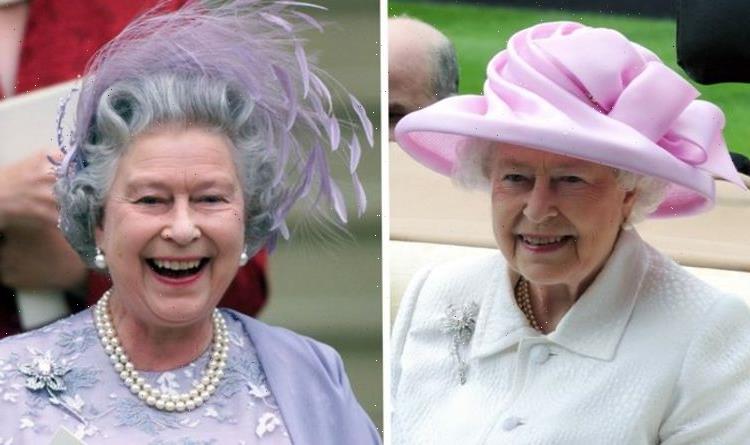 The Queen is rarely seen without a brooch on her lapel, usually worn to complement her strikingly bright outfits. But Her Majesty’s brooches are more than just pieces of beautiful jewellery: they symbolise deeper meanings and reveal significant aspects of the Queen’s life.

Her Majesty not only has a vast brooch collection, but it is also one of the most impressive selections in the world.

It is thought that the monarch has up to around 100 brooches, with special ones on regular rotation.

“There are several priceless brooches owned by the Queen that are steeped in history and you could say these jewels attest to the sheer wealth and power of the British monarchy.”

One of these historical brooches is the Williamson diamond brooch.

This piece is shaped like a clematis flower and has six petals encrusted in diamonds.

The diamonds are white and surround a larger pink diamond at the centre of the brooch.

This diamond is “one of the rarest flawless pink diamonds in the world”, according to jewellery expert Max Stone at jewellers Steven Stone.

That is why the jewellers have given the brooch such a high value, estimating that it is worth a whopping £25million.

This makes the jewel the second most expensive brooch in Her Majesty’s brooch collection.

Mined in Tanzania at the Williamson mine by Canadian geologist John Thoburn Williamson, the uncut 54.5 carat pink diamond was given to Princess Elizabeth as a wedding gift in 1947.

In 1953, the rough gem was cut and polished to a weight of 23.6 carats and used to make a brooch by Cartier.

It was placed alongside 203 white diamonds, including brilliants, marquises, and baguettes, before it was given back to Her Majesty.

The Queen has worn the brooch for notable royal occasions over the years, including the 1981 weeding of Prince Charles and Princess Diana, as well as the wedding of Prince Edward and Sophie, the Duchess of Wessex in 1999.

More recently, Elizabeth wore the brooch to the Royal Ascot in 2011 and to the Elysée Palace during an official visit to Paris in 2014.

Speaking to Express.co.uk, Nick Withington, Managing Director of jeweller William May, commented on the valuable brooch. He said: “From the style and the cut of the diamonds, it looks like a late 19th century piece with a central diamond and up to 132 diamonds on the petals.

“The central diamond appears to be 1.50ct in weight, with around 12ct in diamonds on the petals made up of a smaller stone.

“This is an important piece of jewellery for the Queen as it can be seen adorning many of Her Majesty’s outfits over the last seven decades.

“With this in mind, the value of the provenance would far outweigh the diamonds and be hundreds of thousands of pounds in value.”

What Is Katt Williams' Net Worth Now After His Employees Stole Millions of Dollars From Him?
Celebrities News