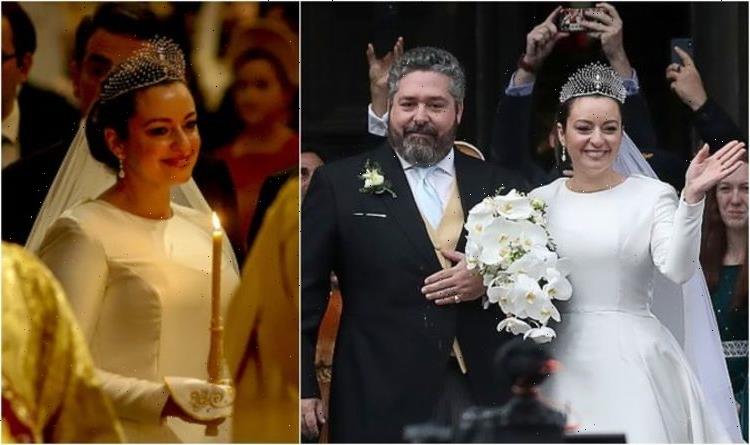 The Russian royal wedding took place at St Isaac’s Cathedral, and the ceremony was particularly poignant as it was the first wedding of its type in 104 years after the assassination of the last Tsar and his family. Grand Duke George Romanov, the only son of Grand Duchess Maria Vladimirovna and Prince Franz Wilhelm of Prussia, is the third great-grandson of Emperor Alexander II of Russia. George’s great-grandfather, Grand Duke Kirill Vladimirovich, was amongst the Romanov family members who escaped the Russian Revolution, resulting in Tsar Nicholas II being assassinated in 1917. Queen Sofia of Spain was in attendance, as well as Princess Leia of Belgium, and Sheikh Mohammed bin Hamad bin Khalifa Al Thani.

George’s bride, Rebecca, is the daughter of Ambassador Roberto Bettarini, an Italian diplomat, and is the Director of the Russian Imperial Foundation.

She recently converted to Russian Orthodox and is now styled as Victoria Romanova.

As befits a royal bride, she wore the Lacis Tiara from Chaumet.

According to the jewellery house, it is a modern revisiting of the traditional Russian kokoshnik, which is the same style of tiara worn by Princess Eugenie on her wedding day in 2018.

The tiara has been designed to look like a sail being blown by the wind, in tribute to George’s naval connections.

The bride donned a stunning white satin gown which featured a high neck, long sleeves and a billowing skirt.

Mother-of-the-groom Grand Duchess Maria Vladimirovna was stunning in a blue fur-trimmed ensemble as she proudly watched her son tie the knot.

After the religious ceremony, the bride changed into a fairytale-inspired second wedding dress embellished with crystals to continue the celebrations at an evening gala, held at the Russian Museum of Ethnography.

However, some royal fans were more cynical.

“The only person at the wedding who is smiling and happy is the bride.

“Everyone else looks like they are at a funeral.

“The groom looks like he is about to be put in front of a firing squad.”

Romanov said the couple chose St Petersburg as the venue for tying the knot because it was the first place in the country where the family returned in the early 1990s.

“It is very, very close to our family,” he told the Saint Petersburg-based news website Fontanka ahead of the wedding.

Royal commentator, Jonathan Sacerdoti, told Express.co.uk: “For more than 100 years it would have been almost unimaginable that this wedding could take place in St Petersburg.

“While these titles don’t mean much anymore, and any claim of royal status is now very weak, as a lavish relic of old-world extravagance, the two-day wedding promises to be quite a spectacle.

“From the exchange of Faberge wedding rings to the gathering of various descendants from several other exiled royal houses it will be like some kind of historical reenactment.”