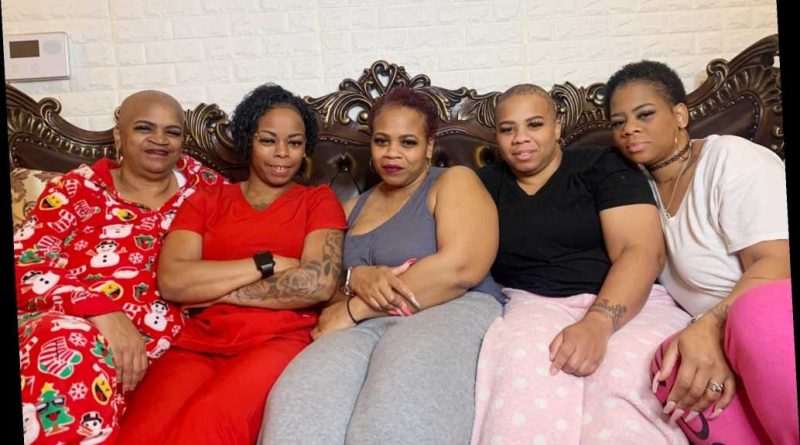 Tessica Brown — the woman who went viral for using Gorilla Glue in her hair and, later, had surgery to remove it — is getting some sweet support from the women in her family.

In a photo obtained by PEOPLE, Tessica's sisters Juanita Brown, Erica Brown, Jamie Sino and Rose Hayes, as well as mother Jessica Brown, are all shown with short hair, having chopped off their own locks in support of the 40-year-old mother of five.

The picture, taken in Violet, Louisiana, show the women seated together under a wall adorned with butterfly decorations, showing off their new looks.

Tessica, who went viral using Gorilla Glue in place of hairspray, first shared her plight on TikTok, telling users on the platform that she had applied the brand's Spray Adhesive Heavy Duty to her hair when she ran out of her go-to Got2B Glued Blasting Freeze Hairspray.

In the video, she explained that she'd been unable to move her hair for "a month." Tessica realized putting in the Gorilla Glue was a "bad, bad, bad idea" after she applied it to her hair.

After several failed attempts to remove the glue at home, Tessica eventually went to her local emergency room in Louisiana to seek medical attention. However, they sent her home with sterile water and MediChoice Nail Polish Remover Pads to use on herself.

A silver lining appeared for Tessica when plastic surgeon Dr. Michael Obeng — who is based in Los Angeles — saw her struggle online and reached out to tell her he could remove the glue with a special chemical treatment, CBS News reported. The surgery typically costs over $12,000, but Obeng offered it to her for free.

Tessica's manager, Gina Rodriguez, told Entertainment Tonight last week that the plastic surgeon was eventually able to successfully "remove all of the Gorilla Glue out of her hair."

"She is currently resting and healing from the ordeal," Rodriguez said at the time. "As you can imagine, Tessica's scalp is extremely sensitive right now and will need some time to recover." (Tessica later showed off her shorter 'do on Instagram.) Speaking with PEOPLE this week, Tessica recalled feeling overcome with emotion when she woke up from surgery and could run her fingers through her hair again, after spending more than a month with the glue shellacked to her head. "You should have seen the tears of joy when she could finally run her fingers through her hair," Obeng told PEOPLE. "That young lady has been through a lot, and I'm glad that she has finally has this, and that she is finding relief, and she's gone on to her normal life now."

Added Tessica of her doctor, "This man is some type of miracle worker. … I'm telling you, this man is amazing."

Before Obeng reached out, Tessica had started a GoFundMe to raise money for treatment and received more than $23,000 in donations. She's now going to donate $20,000 of it to Obeng's charity, R.E.S.T.O.R.E, which provides free reconstructive surgery to people with deformities in developing countries, and the remaining $3,000 to three families in need in her community.