Home » Fashion » So long, thongs: women of all ages are rejecting G-strings

"She isn't wearing a G-string! How refreshing!" This was my response to an image I saw on Instagram the other day. I actually had to do a double take. I was genuinely surprised and delighted.

It was a lovely black-and-white artistic shot of a woman wearing undies only, sitting with her knees bent and with her back to the viewer. It was classy and sensual and there wasn't an exposed cheek in sight. I suddenly didn't feel so alone with my regular undies and I applauded the model and the photographer for their inclusion of these almost extinct underpants. 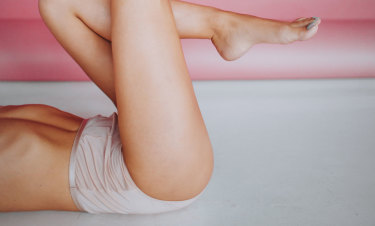 Then, almost in the blink of an eye, these tiny underpants got a mainstream rebirth, moving beyond the bedroom to firmly wedge their way into thousands of bottoms.

But to get there, a "need" for G-string underwear had to be created. That was done by making them the antidote to a previously unrecognised problem – that of the "horrid" visible panty line, or VPL. Women were either quick to agree that it was suddenly uncool and unflattering to see the outline of underpants, or they were shamed into it – and hey presto, these micro undies became ubiquitous.

I saw my first photo of a G-string, a pink bikini, when one of my high-school classmates wore it in the late 1980s. She was one of the wilder girls, not particularly popular or smart and definitely not a follower, but more of a pioneer I'd say – of the G-string, in any case. I regarded it as quite risqué but didn't give it a second thought until much later. By then, G-strings had been wholeheartedly embraced as the new underpants.

In my 20s, I experimented with a few pairs but they inevitably ended up in the bin. Later, in my 30s, I decided to give them another "crack"; this time I bought a more luxurious, and more expensive, lace-trimmed silk G-string with matching bra. But I still didn't like the style, and a year later I decided to toss those, too.

I never bothered buying another G-string. I simply don't seem to be able to tolerate the thin piece of fabric wedged up my arse and can't stand even a small wedgie created by slightly ill-fitting undies. I start fidgeting like Rafa on centre court, constantly tugging and rearranging my pants.

The curious thing is that these meant-to-be-discreet undergarments are no longer so. It all began in the '90s, when G-strings met low-riding jeans. Soon these flimsy knickers became more and more visible under all sorts of clothing, and while this look was initially pioneered by the likes of Britney Spears and Paris Hilton, it was quickly copied until it became passé.

Personally, I like support and coverage on my backside; it makes more sense to me and it's definitely more comfortable. And men tend to agree. When I ask them if they'd wear G-strings, the overwhelming response is always, "Nah, they'd be too bloody uncomfortable." Also, I prefer to floss my teeth rather than my bum.

The good news is that I've since found I'm not alone. Women of all ages are rejecting G-bangers in favour of more coverage, resulting in a drop in G-string sales and a growth in full-bottom undies. There's an underpants revolution taking place and more and more women are opting for comfort and practicality – which many believe is the new cool and sexy.

This article appears in Sunday Life magazine within the Sun-Herald and the Sunday Age on sale March 24.