Last November, the internet fell in love with Tanqueray, a straight-shooting New Yorker who shared memories of her life as a burlesque dancer in the 1960s and ’70s with the many millions of people who follow Humans of New York on Instagram, Facebook, Twitter and Tumblr.

“I chose the Fashion Institute of Technology, which I hated,” she told Humans of New York.

The post was shared widely and received tens of thousands of comments on Instagram, including one from the actress Jennifer Garner, who asked: “Why is this not a @netflix series?”

For almost a year, there were no updates from Tanqueray, whose real name is Stephanie Johnson. Then last week, Brandon Stanton, the creator of Humans of New York, announced he would post 32 more quotes by Ms. Johnson, 76, on Instagram in an effort to raise money for her medical expenses and ongoing care.

“Stephanie’s health has taken a bad turn, and she’s in a really tough spot,” Mr. Stanton wrote in the post that introduced the series. “I’m going to tell her story right here, right now.”

The internet immediately rallied to her aid. A GoFundMe campaign started by Mr. Stanton for Ms. Johnson raised over $1.5 million dollars in a week.

In the new series, Ms. Johnson revealed bits and pieces of a life that took many unexpected turns, including newfound fame (which, she said, a psychic once predicted).

“When this photo was taken, thirty thousand men in New York City knew that name,” Ms. Johnson is quoted in the caption of a Instagram post, where she is holding up a photo that depicts her younger self in a magenta burlesque costume, complete with a feathered headpiece. “They’d line up around the block whenever I was dancing in Times Square, just so I could sign the cover of their nudie magazine.”

In another post she speaks about finding herself in the city’s burlesque clubs.

“The clubs weren’t like they are today,” the caption reads. “There was no VIP section. No velvet ropes and champagne service. Everyone mingled: the pimps, the hustlers, the entertainers, the tourists.”

Mr. Stanton, who started Humans of New York in 2010, said he met Ms. Johnson last year when he was leaving the gym one day. He noticed her outfit, a leopard faux fur coat and a headband she had made, and he complimented her. It was the beginning of a budding friendship.

“She’s lived such a life and she has such a voice,” Mr. Stanton said in an interview. “She describes things in ways and puts together strings of words that I have never heard someone say before.” 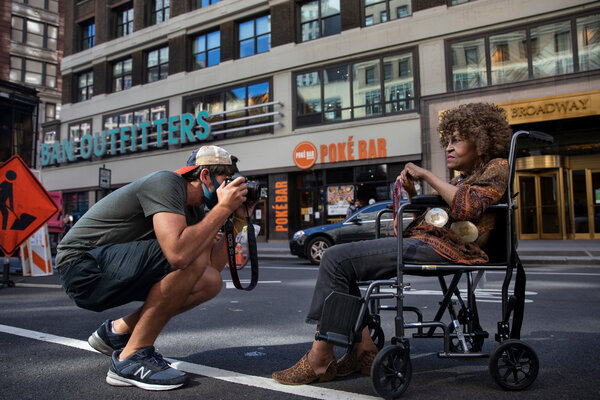 The two had been approached by television and movie executives in the past year, Mr. Stanton said, but Ms. Johnson wanted Mr. Stanton to tell her story. The original plan was a podcast. But when Ms. Johnson’s health began to deteriorate, the two decided to roll out her story in 32 parts over Instagram.

“It wasn’t until I got my camera and embarked on this yearlong relationship that I got to know Stephanie,” Mr. Stanton said, adding that he realized that Ms. Johnson experiences a great deal of sadness and loneliness.

Ms. Johnson told Mr. Stanton that she changed her name often to protect herself from her landlord, and that she has had periods of being very behind on rent and indebted to bill collectors. She also did so to keep from being found by people she met while working in the sex industry.

“Tanqueray is a character I created when I went through a divorce,” Ms. Johnson said in an interview. “I had to make a living, I just had to reinvent myself to succeed.”

Over the course of a year, in two hourlong sittings at a diner, Ms. Johnson told Mr. Stanton about her life. Raised outside of Albany in a mostly white community, she was forced to leave her home as a teenager after a tumultuous relationship with her mother. Once in New York City, she did what she had to do to survive. The Instagram posts include recollections of her time renting a room at the Salvation Army; ditching one of the Temptations who wanted to go to bed with her; and calling on the mob to intimidate her ex-husband.

“Tanqueray is not who I am and never has been,” Ms. Johnson said. “I’m a private person. I have no close girlfriends. Most of my friends, like the gay kids who did the balls in Harlem, they were real friends. All those kids are dead now.”

Of the name itself, Ms. Johnson said: “Don’t ask me where it came from. Maybe it was survival and making myself happy instead of making others happy.”

“I’m going to be Tanqueray because Stephanie ain’t gonna get it,” she added.

The newfound fame and fortune does not faze Ms. Johnson, who, despite the flashy persona, is a quiet, introverted woman who has never smoked a cigarette, doesn’t drink and prefers reading and being at home to going to parties. She said she plans to live her life the way she has been and upon her death the remaining money from the GoFundMe will be donated to the Association to Benefit Children, a nonprofit association that serves underprivileged children in New York City.

“I look at people and they don’t have food, they are homeless or whatever is going on, and if I am fortunate to do this, why wouldn’t I donate it?” Ms. Johnson asked. “I don’t even want a car.”

(She did say she is happy to be recognized at the supermarket or to get a free dessert every once in a while at the diner. “I think its wonderful,” she said. “People really like me.”)

Mr. Stanton attributes the attention and donations to Ms. Johnson’s unabashed way of recounting moments of her life, mixing unsparing observations with humor and gentle reflection.

“The telling of the story becomes part of the story itself,” Mr. Stanton said. “One of the most fascinating things that has happened to me is meeting her.”

Ms. Johnson is happy to use the peaks and valleys of her life to inspire people that may be going through a hard time now. “If I had regrets I wouldn’t be where I am now,” she said.