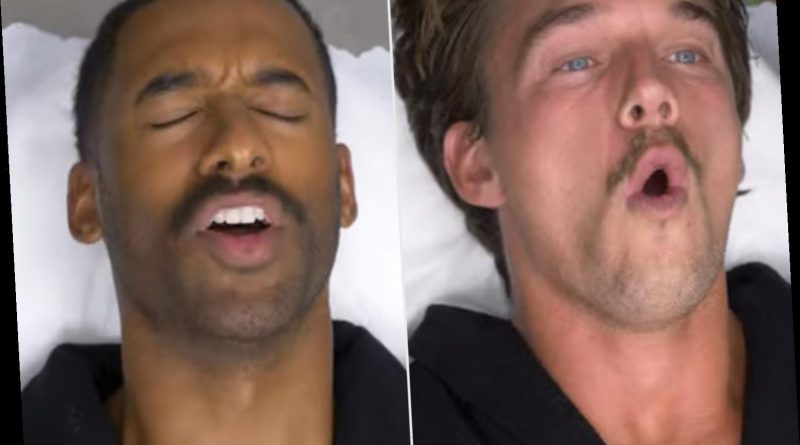 Matt James and Tyler Cameron found out the truth behind the saying "beauty is pain" — the hard way.

Ahead of James' second week of his tenure on The Bachelor, Cameron, 27, posted a YouTube video of the two getting Brazilian bikini waxes before James left for the show.

"We got waxed and we got wrecked," Cameron wrote in the video's description.

Last week, Cameron posted a video of the two having a spa day with a few friends. In the video, he says he wants James to understand what some of the women on his season might have gone through leading up to filming.

"So Matt can have a real appreciation for these girls when they come out of the limo," Cameron says in the video, before drawing numbers to determine what order they'd undergo a Brazilian wax and, of course, Cameron and James were up first. Cameron said he was aiming for the maximum amount of pain possible, requesting white strips in addition to the gel wax that is typically used for bikini waxes.

"I saw 40-Year-Old Virgin and that looked painful, and that's what I was going for," he says in the video.

From the looks of it, the waxing reached 40-Year-Old Virgin levels of pain, with Cameron yelling as his face turns bright red.

As James lies down for his turn, he answers a video call from his mom, which the wax technician took as the perfect distraction.

"I'll have to call you back," James whispers to his mom after screaming in pain when the wax strip was ripped off. After finishing his waxing session, James receives a round of applause from his friends. RELATED: Matt James Says He 'Can't Speculate' If Pals Hannah Brown and Tyler Cameron Will Get Back Together

The current Bachelor recently opened up to Entertainment Tonight about how he "wouldn't be surprised" if Cameron or former Bachelorette Hannah Brown showed up on James' season of The Bachelor.

"I don't want to put a lot of expectations on it, but I think it's a great start to the year," James said.

Over the summer, James, Cameron, and Brown quarantined together in Florida amid the coronavirus pandemic. Both Brown and Cameron were a crucial support system when he found out he was going to be the next Bachelor, James told ET.

"Man, they were huge," he said. "Especially Hannah, that relationship that we formed during quarantine — she was awesome."

"She just told me to be myself, and the same advice that Rachel [Lindsay] offered, be myself," James added. "It sounds simple, but when you're in that moment, it's easy to get caught up in the moment, but I continued to do things that grounded me, which was exercise, eat healthy, pray. And I got through it."