Home » Fashion » The Duchess of Cambridge rules of dressing at 40 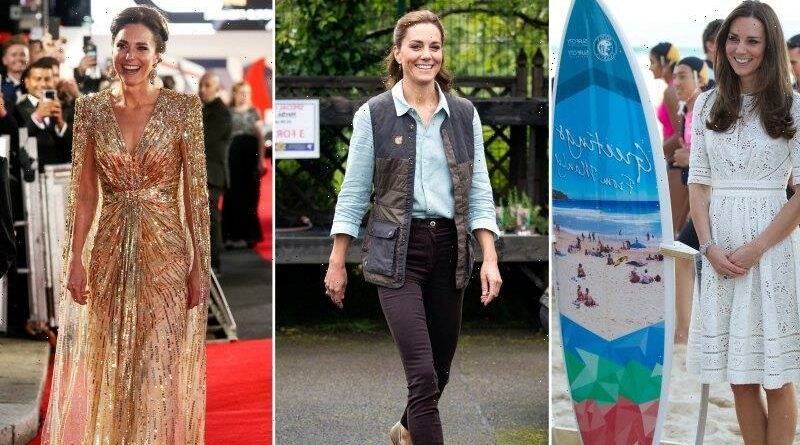 No prizes will be awarded for guessing the style of outfit selected by Kate, the Duchess of Cambridge, to celebrate her 40th birthday on Sunday. The glossy image of a trim, tasteful silhouette, conservative neckline with understated accessories and hair falling down in brunette waves is as predictable as the plot of a Hallmark movie.

Just as Kim Kardashian favours body-con ensembles, Jennifer Lopez leans into dresses that oscillate between plunging and floating and Ariana Grande is a couture Tinkerbell, Kate has an immediately recognisable, definitive look. Following her striking appearances in a Christmas red Catherine Walker coat dress behind the piano at Westminster Abbey last month and at the London premiere of No Time To Die in a sparkling Jenny Packham gown, Kate’s outfit will predictably tick all the boxes carefully constructed during nearly 20 years in the public eye. 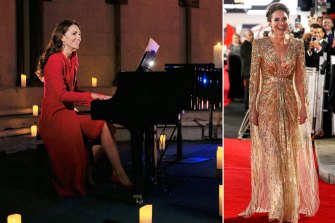 Hits of 2021: The Duchess of Cambridge in Catherine Walker at Westminster Abbey and in Jenny Packham and the London premiere of No Time To Die.Credit:AP

“When you look back at other royals, they have very much dressed for the era,” says Mattie Cronan, style director at the Australian Women’s Weekly.

“Princess Diana and Fergie were classic ’80s. When we look back at Kate, there won’t be such a trend-led departure. She has really locked down her look, especially in the past 10 years.”

Find a uniform and a theme

Cronan, familiar with royalty having worked with Crown Princess Mary of Denmark, describes Kate’s approach as uniform dressing, enlivened by the theme of the event that she’s attending.

“As well as being very neat and simple, she never goes too loud and over the top. You could never accuse her of upstaging the event she’s attending. The look is always polished and super stylish. She dresses for the theme of the event she’s at, with her own requirements.” 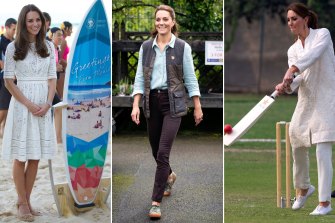 The themed approach has been applied on the lawns of Wimbledon in a kelly green Emilia Wickstead dress and a quilted Fjallraven vest, and green Superga sneakers on a visit to a Norfolk garden centre. On royal tours the duchess also pays tribute to local designers, donning an embellished shalwar kameez by Gul Ahmed in Pakistan, Zimmermann in Australia and Rebecca Taylor in New Zealand.

“It’s about being respectful of the occasion and not outshining it,” Cronan says.

Stylist Chloe Buttenshaw, who worked on covers with Miranda Kerr and Jennifer Hawkins at Marie Claire, points to Kate’s mix of high end and high street labels as easy to emulate for those without access to a family vault stacked with tiaras.

“A Zara dress paired with an Alexander McQueen coat or the Zimmermann dress she wore on her Australian tour in 2014, which sold out quickly. Everyone has a chance to dress like Kate,” Buttenshaw says.

While everyone may have the opportunity to dress like Kate, stylist Mikey Ayoubi who has worked with singer Jessica Mauboy and actor Bojana Novakovic (from the Binge series Love Me) is more selective about which looks to emulate.

“When she does her day dresses it’s either hit or miss,” Ayoubi says. “She can look chic in ’70s inspired Diane von Furstenberg or old and conservative in those awful long, floaty floral numbers. Sometimes it’s like she turned 40, 10 years ago.” 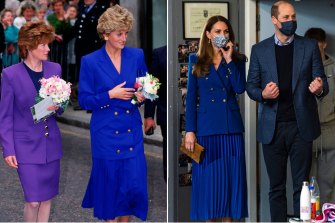 Royal blues. Princess Diana with her sister Sarah McCorquodale in 1992 and Catherine, Duchess of Cambridge and Prince William in May.Credit:Getty, AP

“Whether it’s open or closed, I think this blend of the feminine and tailoring, rather than just pretty dresses, is more relevant to the modern woman,” Ayoubi says.

“The royal blue Zara blazer she wore in Scotland with a pleated skirt is an absolute favourite, and it’s very Princess Diana.”

Simple with a smoky eye

When it comes to beauty looks, Kate has flirted with a fringe, side part and the occasional up-do, but she generally sticks to a signature style where flawless skin and long hair takes centre stage.

“Kate’s hair and make-up reflect perfectly her natural style which I would call effortless classic,” says hair and make-up artist Chris Coonrod, who has worked with Elle Macpherson, Vogue and Harper’s Bazaar. “She really just relies on her natural beauty and she obviously has great hair which she usually keeps loose and simple apart from public appearances when she often adds a smoky eye or simple up-do.”

Strong lipstick colours are also avoided. Too trendy and too great a risk of getting lipstick on the teeth.

“It’s all designed to be very approachable and relatable.”