Home » Fashion » The Fashion Awards Get a New Look — and Purpose

Traditionally, the Fashion Awards ceremony is one of the glitziest events on the annual industry calendar. The British answer to the Met Gala, it is celebrated during the first week of December at the Royal Albert Hall in London with several thousand guests and a vast red carpet on which celebrities promenade under a wintry night sky.

Not this year. Like so many other large-scale events around the world, it has been transformed by the coronavirus pandemic.

“It has been the most extraordinary 12 months,” said Caroline Rush, the chief executive of the British Fashion Council, which administers the awards. “It would have been inappropriate to pretend that it was business as usual.”

Like the Council of Fashion Designers of America awards, which were canceled in June, the lavish red carpet is gone. But unlike the CFDA awards, which were reduced to a brief digital announcement of big winners in September, the Fashion Awards have also done away with traditional prizes, including best women’s wear designer and brand of the year.

In their place: a new digital format, with a short film that had its premiere on Dec. 3 on the website fashionawards.com. The film, a slickly edited mash-up of talking heads, striking photographs and video footage of high fashion and global news moments, spotlights the work of 20 honorees in just four categories: Community, Creativity, People and Environment.

And it is less about celebrating runway trends, silhouettes and blockbuster sales than about acknowledging creative responses to the health crisis and the impetus to change. According to Ms. Rush, the council and its members wanted to clear a path toward a new way to recognize and reward industry talent and the way fashion’s influence can extend far beyond the catwalk.

That is, she said, “why in this year’s lineup you’ll see some smaller names standing shoulder to shoulder with some massive ones.”

Thus, in the Community category, Chanel was honored for its 1 million pound (roughly $1.3 million) donation by its British arm to British charities responding to the pandemic, its PPE manufacturing and its racial justice fund and company climate strategy. But so was Michael Halpern, an American designer based in London who is known for his sparkly evening wear. Mr. Halpern’s London Fashion Week video featured eight key female workers — a nurse, cleaner and train operator, among them — joyfully modeling his latest collection in a moving tribute to the power of collective action.

And so was the collective known as the Emergency Designer Network. The group of rising British stars — Holly Fulton, Phoebe English, Bethany Williams and Cozette McCreery — spearheaded the manufacture of 50,000 surgical gowns and 10,000 sets of scrubs for health workers, establishing a network of experts that range from seamstresses to logistics specialists, with production continuing today.

“I am so proud of this award and the work of the whole EDN community,” Ms. Fulton said, noting that the four designers had never met one another before creating the collective. “Rallying together as we did reminded me about things in this industry that I had forgotten, about how much more than just clothes it can be. It helped so many people find purpose at a very dark time. And it shows that we can do stuff other than just design, and that as fashion designers our skill sets are actually very versatile.”

Creativity in the face of the pandemic was also recognized, with Jonathan Anderson being lauded for his show-in-a-box concept, which redefined the runway experience by transforming it into a toylike game that could be created on a kitchen table. Miuccia Prada and Raf Simons were honored for the debut of their joint collection. And Grace Wales Bonner was heralded for her work challenging the roles of race and Black culture in fashion. 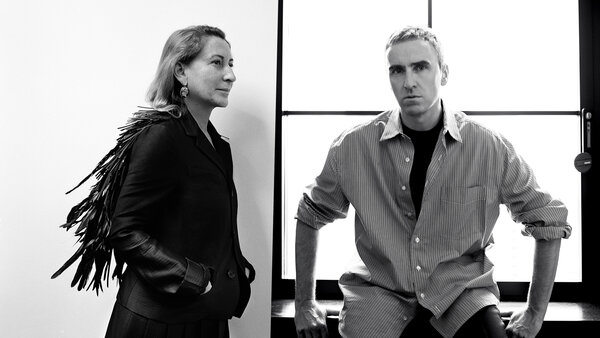 In the Environment category, high-profile local veterans of the cause like Stella McCartney and Anya Hindmarch were joined by Gabriela Hearst, who hosted the first ever carbon-neutral catwalk presentation in the spring, and Christopher Raeburn, the men's wear designer who has worked tirelessly — often under the radar — to scale upcycling.

“To see social power and soft power rewarded this year brings a new degree of consciousness to the industry awards system that is really impressive,” said Samuel Ross, the founder of the A-Cold-Wall label. Alongside Edward Enninful, the editor of British Vogue, the designers Aurora James and Priya Ahluwalia, and Lindsay Peoples Wagner and Sandrine Charles of the Black in Fashion Council, Mr. Ross was one of the honorees in the People category, which focused largely on responses to the Black Lives Matter movement.

Last summer, Mr. Ross created the Black Lives Matter Financial Aid Scheme, pledging 10,000 pounds (about $13,350) to the organizations and people on the frontline supporting the Black Lives Matter movement. He also awarded grants of 25,000 pounds (about $33,390) to Black-owned businesses across a diverse field beyond fashion, including technology and industrial design.

“Tearing down the old processes, bringing visibility to those pioneering new paths and offering new opportunities — that is a huge change for this business but it is the right step forward,” Mr. Ross said. “It is what I’ve been doing with my work, but also what the BFC is trying to do with these new awards. This year has been brutal for so many. But this is a celebration that feels correct, and modern and inspiring.”

Also celebrated in the awards video are the 2020 New Wave Creatives. Featuring young artists, activists, casting agents, florists, makeup artists, set designers, stylists and writers, many of whom are interviewed for the montage, the list is meant to be a source for those in the industry looking to recruit from a diverse pool of talent.

Whether the revamped template is here to stay remains to be seen, given that the lavish black tie format is traditionally a valuable way to generate much needed funding. Ms. Rush, who said that conversations about next year’s awards were already underway, pointed out that without the hefty table sponsorship and donations of previous years, there would have been no emergency support available from the BFC Foundation Fashion Fund for the Covid Crisis, which began offering grants to designers earlier this year.

“What we will take forward is the opportunity to champion those who are at the forefront of positive change as well as creativity and commerce in fashion,” Ms. Rush said. “As we go into the new decade, we are mindful of that becoming more important than ever.”