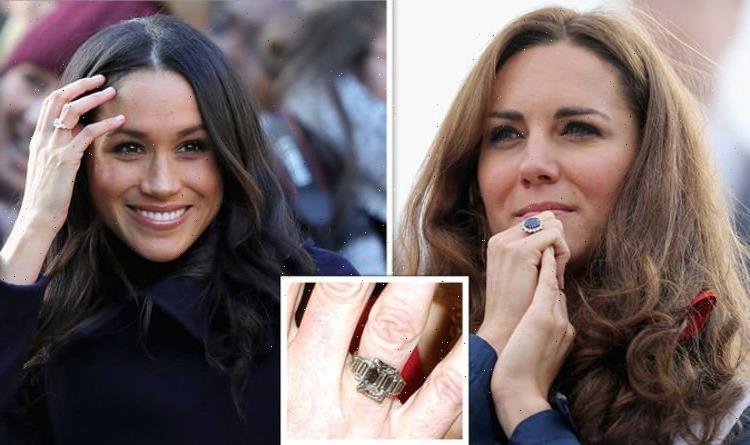 From Princess Diana’s iconic blue sapphire engagement ring to Meghan Markle’s symbolic trilogy ring, no two royal engagement rings are the same. Express.co.uk spoke to Gary Ingram, CEO of TheDiamondStore.co.uk, about the value of some of the Royal Family’s most famous engagement rings.

Prince William proposed to his university girlfriend Kate Middleton with the ring in 2010, and in the years since Kate has rarely been pictured without it.

Mr Ingram said: “Kate Middleton’s ring, which originally was bought for Princess Diana by Charles, is probably considered the most valuable of all the royal rings now.

“It originally cost around £30K but is now estimated to have a value of almost £400K.”

According to the jewellery expert, Camilla’s diamond engagement ring from Prince Charles is worth a staggering six-figure sum, although it is not one of the most famous royal engagement rings.

Poignantly, the ring is thought to have belonged to Charles’ beloved grandmother, the late Queen Mother, making the ring a family heirloom.

Meghan Markle debuted a dazzling trilogy diamond ring when her engagement to Prince Harry was announced in 2017.

The conflict-free central stone was sourced from Botswana, a place Harry and Meghan visited during the early stages of their relationship.

On either side of the large diamond are two smaller diamonds that belonged to Harry’s late mother, Princess Diana.

According to Mr Ingram, Meghan’s engagement ring is worth an estimated £175,000.

Princess Eugenie’s engagement ring from Jack Brooksbank is thought to be worth £100,000.

The sparkler is particularly unique for a royal ring as it features a padparadscha sapphire famed for its orange-pink hue.

The sapphire is surrounded by diamonds arranged like a flower, and it draws parallels to the ruby ring Prince Andrew gave Eugenie’s mother, Sarah Ferguson, in the 1980s.

Princess Beatrice’s engagement ring from Edoardo Mapelli Mozzi is also thought to be worth a six-figure sum.

Featuring a central diamond flanked by baguette diamonds, Beatrice’s engagement ring has an Art Deco feel to it.

Edoardo helped to design the ring with jeweller Shaun Leane, and it perfectly entwines with the wedding ring Edoardo also commissioned.