Home » Fashion » The trend you’re about to see everywhere: the opera glove 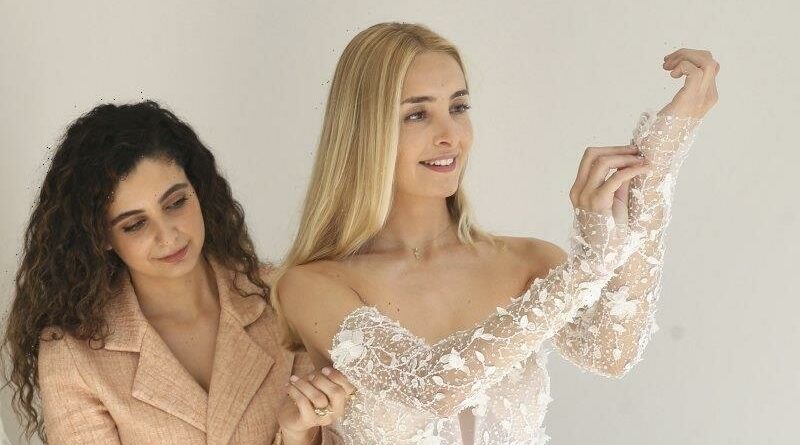 Gloves were last in fashion nearly 40 years ago when Michael Jackson grabbed his crotch with a solitary leather style and Madonna vocally empathised with virgins in fingerless lace versions. Since then, gloves had been relegated to debutante balls and the dress up box but designs that reach the elbows and beyond are making the type of comeback Madonna still dreams about.

Rihanna’s latest appearance on the cover of US Vogue in an Alaïa lace catsuit with matching red opera gloves, sent searches for “lace gloves” soaring on e-commerce site Lovethesales by 110 per cent. Nicola Peltz Beckham’s trip down the aisle with white lace gloves from Valentino and red carpet appearances at the Grammys by Olivia Rodrigo, Saweetie and Dua Lipa in leather and satin versions are further fuelling demand for elbow-length versions. 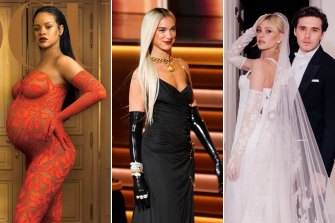 “There’s been a lot of interest because of the styles seen in shows such as Bridgerton,” says Livia Michelini from British manufacturer Dents, which has been producing gloves since 1777. “We supplied some gloves for Bridgerton, but now the interest is off-screen.”

“Along with satin styles, long leather gloves are popular with those after a street style look, and we now sell 12 different colours. We would never have had that many colours 12 months ago. There are always niche areas with gloves, but we see opera gloves as a sustained trend for the next year and beyond.”

Designers such as Raf Simons, Dries Van Noten, Demna Gvasalia for Balenciaga and Erdem Moralioglu have championed the return of long gloves on the runway, but the trend is also powered by couture bridal designers.

Sant Elia designer Stephanie Caltabiano, who creates intricate bridal gowns and custom pieces for singer Rita Ora along with influencers Jules Sebastian and Elle Ferguson, from her Sydney studio, says that gloves are crossing over from adding drama to wedding days to every day. 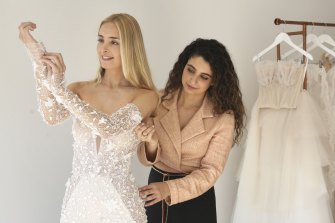 “The influence of bridal wear on the way we all dress is often underestimated,” Caltabiano says. “Long gloves are popular with brides because of the drama. Sheer lace versions offer the theatre and excitement that has been missing from fashion when we were all staying home because of lockdowns.”

Many of Caltabiano’s customers select gloves that extend beyond the elbow to increase their body confidence on their wedding day or at special events.

“You would be surprised by how many women really dislike their upper arms,” she says. “Long gloves allow women to wear a variety of gowns while keeping their upper arms covered. We also recommend fingerless styles, which makes wearing jewellery easier.”

Preparing to showcase her couture collection of non-bridal pieces in the lead-up to Australian Fashion Week, Caltabiano will ignore the street style approach of guests at the New York and Milan ready-to-wear shows who paired gloves with short sleeved-white shirts, jeans and jumpers.

“I am a traditionalist and prefer opera gloves with formal wear. I see it as a nod to couturiers such as Christian Dior who would show their work with long gloves.”

Fellow traditionalist Amanda King runs the Australian Finishing School and says that while you might be flexible with your wardrobe, there are rigid rules surrounding how and when you wear opera gloves.

“Opera gloves should not be put on in public, but in the privacy of your home,” King says. “If they must be removed in public, please do so discreetly. This is important because it illustrates your education in etiquette and formalities.”

“When you sit down to dinner, you should take off your gloves, fold them in half, and put them under the napkin on your lap. When dinner is over, you may put them back on at the table.”

To put gloves on, work in the hand from the wrist and then smooth them gradually up the arm. To remove them, perform these actions backwards or watch Rita Hayworth’s legendary nightclub scene in the 1946 film noir classic Gilda.

“We are not removing our opera glove with our teeth,” King says. “That is not ladylike or polite, let alone hygienic.”

Somehow we don’t think that Dua Lipa, Rihanna or Madonna will judge you as long as you look good.

Make the most of your health, relationships, fitness and nutrition with our Live Well newsletter.

Get it in your inbox every Monday.