Because marriage is an ever-evolving experience, we constantly shift, change and, in some cases, start over. In It’s No Secret, couples share thoughts about commitment and tell us what they have learned along the way, revealing their secret to making it work.

Occupation Ms. Miller is a graphic designer; Mr. Pryor is a film director. The couple are also the majority owners of the Real McCoy Rum, a company based in Wyoming, which Mr. Pryor founded while producing a documentary film about Bill McCoy, a Prohibition-era rum runner.

Their Marriage 26 years, 6 months and counting.

The couple married Sept. 19, 1992 at Ms. Miller parent’s home in Brimfield, Mass., before 300 guests. “Jennifer’s parents have a vineyard, and her dad bottled 700 bottles of Wedding White,” Mr. Pryor said. “We had a medieval feast theme and made 25 turkeys roasted on the spit and 25 meat pies, by hand. We also made trenchers, a handmade giant cracker that doubles as an edible plate. Local friends played blue grass.”

They have two children: Maddie, 23, and Finn, 19. The couple split their time at their houses in Bolder, Colo., and Mystic, Conn. 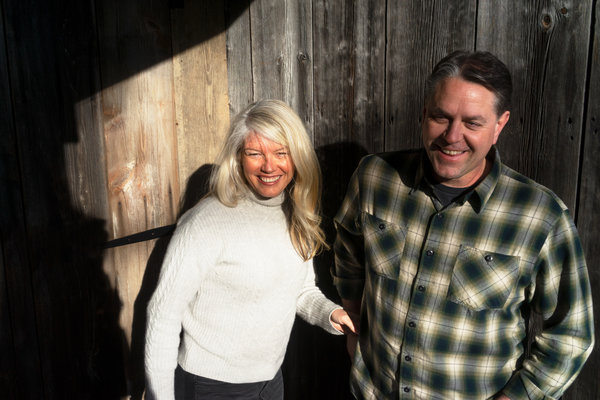 In 1989, Mr. Pryor, then 21, and Ms. Miller, then 20, were attending the University of Connecticut, and both were working at Margaretville, a bar in Storrs, Conn. Mr. Pryor was a bouncer; Ms. Miller, a server. “We’d worked together for the past year and became good friends,” Mr. Pryor said. “We’d broken up with different people, and she had taken a year off from dating. I’d fallen madly in love with her, but respected her decisions.”

Mr. Pryor channeled his feelings toward work. In 1990, he got a job working on the films “Mystic Pizza” and “Home Alone,” which took him to Los Angeles. During that time, he lived in his car, which he parked on the set. “I missed her a lot,” he said. “Hollywood was a lonely existence. The film wrapped. I knew I was going to drive cross country back East so I called her out of the blue and asked her to have dinner with me.”

Going on instinct, he bought Ms. Miller a plane ticket for $400, and told her it was waiting for her at the Providence airport. Ms. Miller didn’t disappoint. She quit her job, packed a bag and impulsively flew West. “I picked her up at the airport and took her out to dinner as promised, then we drove cross country,” he said. “That was our first date. It lasted 18 days.”

She said she fell in love with him during that trip. “It was nonstop conversation,” she said.

The trip ended with Mr. Pryor driving her to her parent’s home in Massachusetts. “It had been a fantastic experience,” he said, “so I said, ‘Why don’t you move in with me?’ She said O.K.” In 1991, Mr. Pryor proposed on Mason’s Island in Stonington, Conn. “I got down on one knee on this pond, the ice started to crack before I could give her my grandmother’s ring,” he said. “We both almost went in the water.”

Mr. Pryor The best way for things to go well is that only one of us can be crazy, emotional or angry at a time. We’re creative people. If we’re crazy at the same time, no one can step back to get an interesting perspective. Even though we’ve been together for almost 30 years, we are still growing, expanding, learning and becoming new people together. I have a tendency to be more shortsighted; she’s more concerned about things. I’m more willing to take risks. She’s direct and strong, but cares deeply for the people in her life and I admire that. I push her outside her comfort zone and make her look at opportunities.

We never fight about us, or the kids. It’s about the pressures of work because we work together. I’ve learned we have a foundation. That you need to back up and let the other person vent. I’ve learned I don’t need to win everything, and that seeing yourself through your partner’s eyes is really interesting. I’ve also learned not to stifle her, but to never stop holding her hand and opening the door.

We have wanderlust together. We have a mutual respect that’s unique. I feel like I’m always in love. We never feel like roommates. Every kiss is important. It has to send a message that you love that person. And make it special even though you do it all the time.

We are well-balanced. He’s the social, front person; I’m the behind-the-scenes one. He challenges me in comfortable ways. It takes me longer to process; he’s very quick to make a decision. I offer other angles. That works out well. We both tend to be creative thinkers, but have practical aspects.

I’ve learned to become more even-keeled. I was a little judgmental. I’m more patient now. I’ve become more willing to try new experiences and expand my horizons. I tend to be a homebody; Bailey is the adventure traveler. I’ve become more flexible and learned to create comfort for myself and my family in any place.

Together we’ve learned not to go to bed angry. That you don’t leave the space if you’re having an issue together; you stay and figure it out. That having shared experiences, whether positive or negative, cements the bond of togetherness as partners.

I’ve learned we don’t always need to be talking to enjoy each other, and to enjoy the little moments when they happen. We tend to reach for one another’s hand at the same time, and his hand is always there when I reach out — which is pretty sweet, and vice versa. It’s comforting, but I still get a flutter, like a kid.