The Duchess of Sussex, 37, stepped out yesterday for a dinner with the King and Queen of Tonga in a floor-length Theia dress, and there was a vital reason why she had the glistening marks. 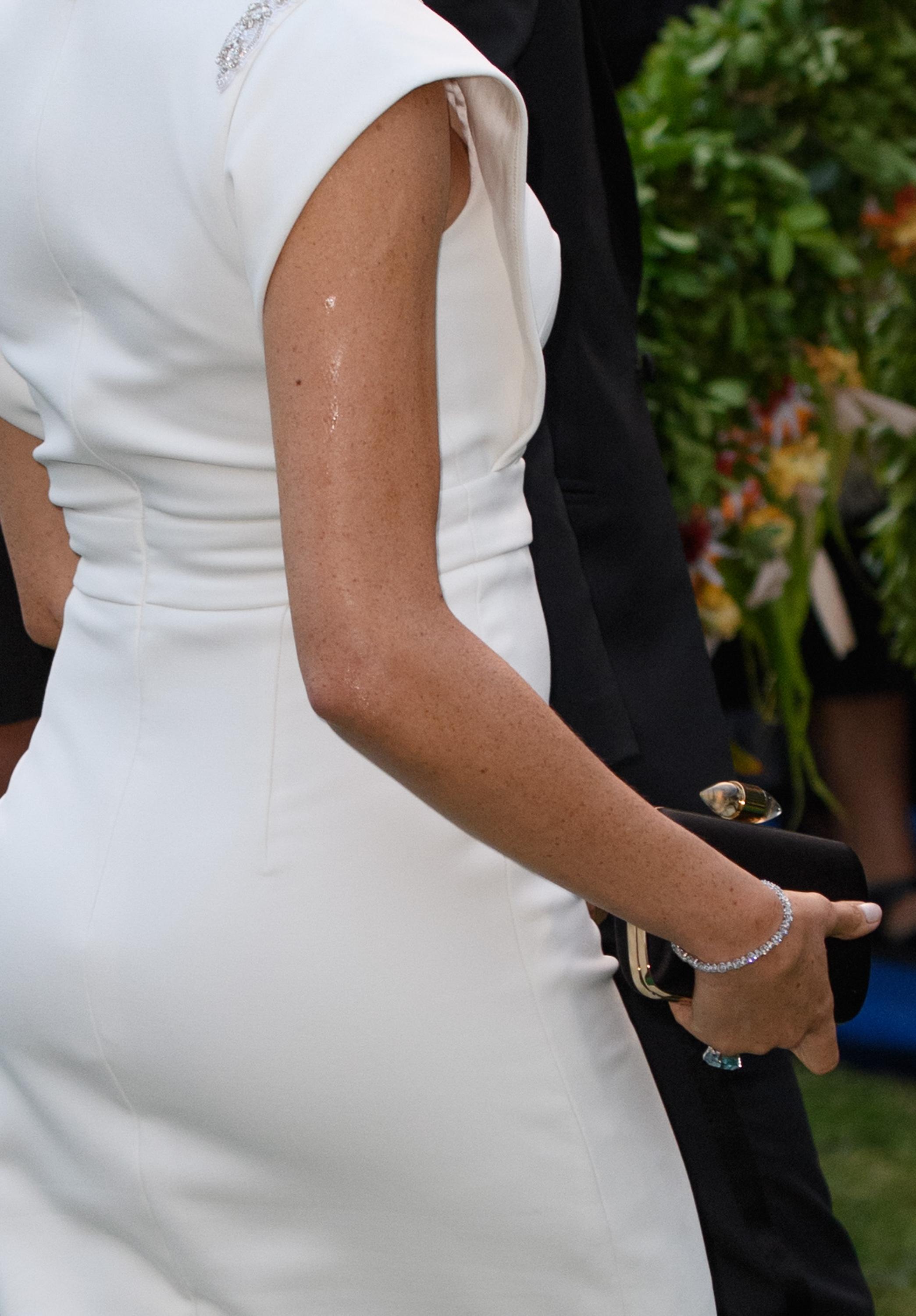 Professor James G. Logan, Head of the Department of Disease Control at the London School of Hygiene and Tropical Medicine, said Meghan’s “wet”, shiny arms were due to her wearing insect repellent to protect herself from the devastating Zika virus.

He explained to People: “The advice would be to wear a repellent which contains an active ingredient and wear that repellent all day and all evening.

“You have to put the repellent on like a hand cream. You have to really rub it in.

“If you squirt it on like a perfume, that won’t do anything because the mosquito will find a bit that’s not covered. 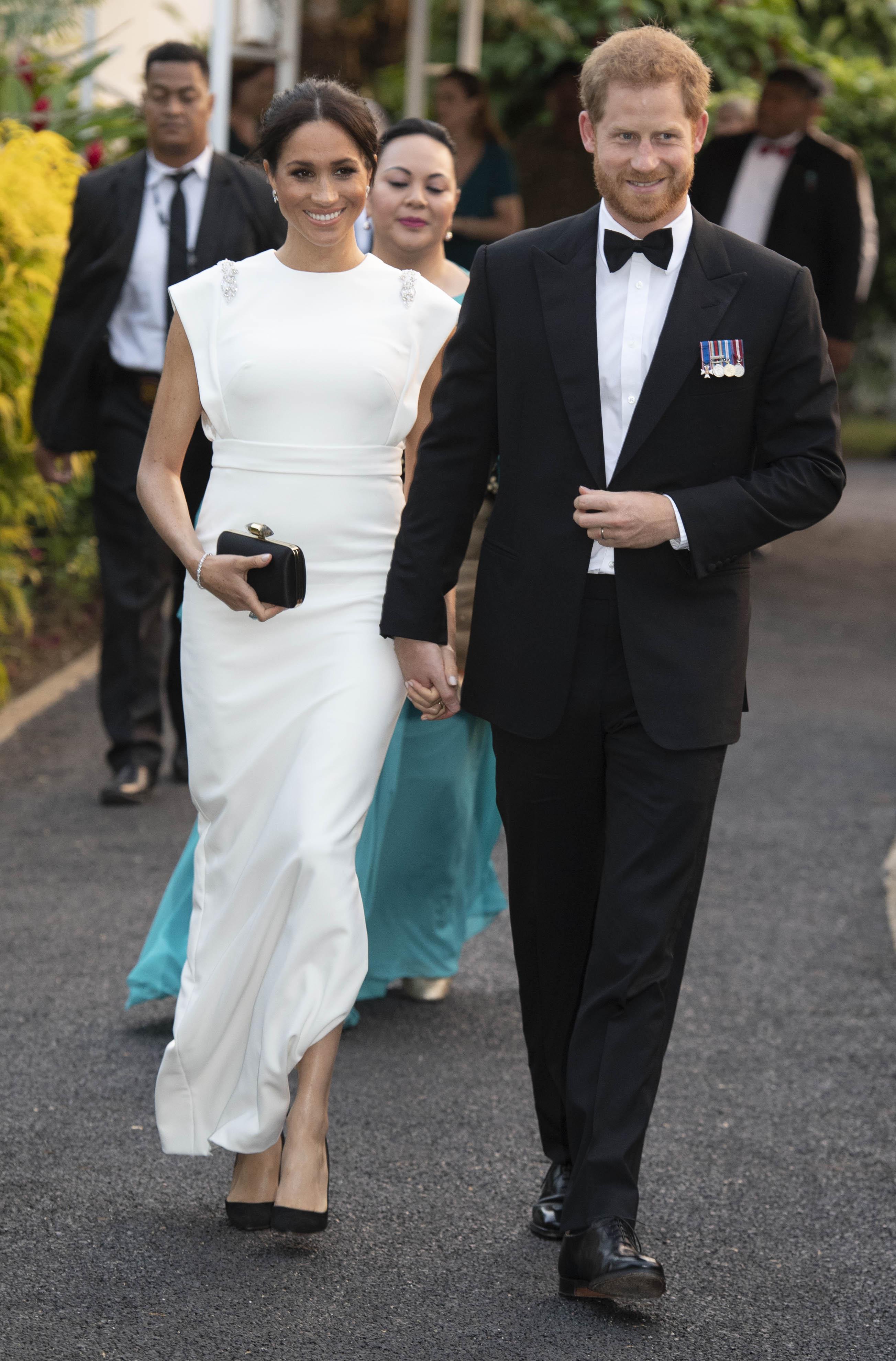 HOW TO PROTECT AGAINST THE ZIKA VIRUS

Mosquitos can even bite through jeans so if the clothing is loose it’s much harder for the mosquito to bite.

Wearing light-coloured clothing can help as these mosquitos are often attracted to dark clothing.

It also helps you spot them, if you see a dark mosquito on a light piece of clothing.

The advice would be to wear a repellent which contains an active ingredient and wear that repellent all day and all evening.

You have to put the repellent on like a hand cream. You have to really rub it in.

“A spray or a lotion is fine but really rub it in and reapply it often. There are four active ingredients, one of the main ones is DEET and it’s safe to use that during pregnancy.”

The royal couple touched down in Fiji on Tuesday, an island which UK health authorities have classed as having a moderate risk of Zika virus transmission and warned that pregnant women should consider postponing non-essential travel.

The Zika virus is transmitted through mosquitoes and can cause birth defects in unborn babies, including microcephaly and Guillain-Barre syndrome, both of which can lead to babies being born with abnormally small heads and restrict brain functions.

However, the Royal couple took medical advice before travelling to the Pacific islands of Fiji and Tonga, which both carry a Zika threat, and decided to proceed as long as the Duchess limited her time outside especially in rural areas.

As part of this, the pregnant mum skipped a visit to the Fijian rainforest with Prince Harry to protect herself from the Zika virus that infects unborn babies.

ZIKA FEARS: What is Zika, what are its symptoms and how are pregnant women at risk?

It's an infection spread mainly by mosquitos, and although it's usually very mild for most people, it can be more serious for pregnant women.

Zika can cause babies to be worn with microcephaly, a condition that results in a baby having an abnormally small head.

After being bitten, symptoms tend to take between two and seven days to start setting in and while most cases aren't contagious, you can pass it from person to person during sex.

It kills about 1 per cent of victims so as we say, it's usually pretty mild. But the effects that it can have on unborn babies can be devasting.

While Zika does not necessarily impact all those who carry the virus, these are the kinds of symptoms that sufferers can experience:

Babies can also be born with severe birth defects from the virus. While most people don't die of the illness, babies who get it can develop severe brain damage which then kills them in the bomb or at birth.

Currently, there is no specific treatment for Zika – although scientists are currently working on a vaccine.

People have also been warned to seek urgent advice to help rule out a malaria diagnosis if starting to feel unwell.

How do you treat Zika?

There's no specific treatment for the infection but the NHS recommends drinking plenty of water and taking paracetamol to relieve the symptoms.

If you feel unwell after returning from a country that has malaria as well as Zika, you need to seek urgent medical attention.

The NHS recommends that expectant mums should avoid travelling to high-risk areas where there are current outbreaks of Zika.

If you do travel to an affected area, you can reduce your risk of catching it by using insect repellent and covering as much skin as possible.

Oh, and make sure that you check your travel plans with your GP before going.

The NHS also says that if you're trying for a baby and you've got any symptoms, you're best off waiting for two months after full recovery before trying to get pregnant.

The couple visited the University of the South Pacific campus in Suva where Meghan gave her first speech as a royal, and revealed her struggle to afford university.

Previously, the Duchess was visiting Suva Market to meet some of the female vendors who have become empowered through a UN Women’s project but her appearance was cut short due to a "security risk", with Kensington Palace blaming the huge crowds.

Eagle-eyed fans claim that Meghan’s new diamond ring could be proof she is having a baby in April.