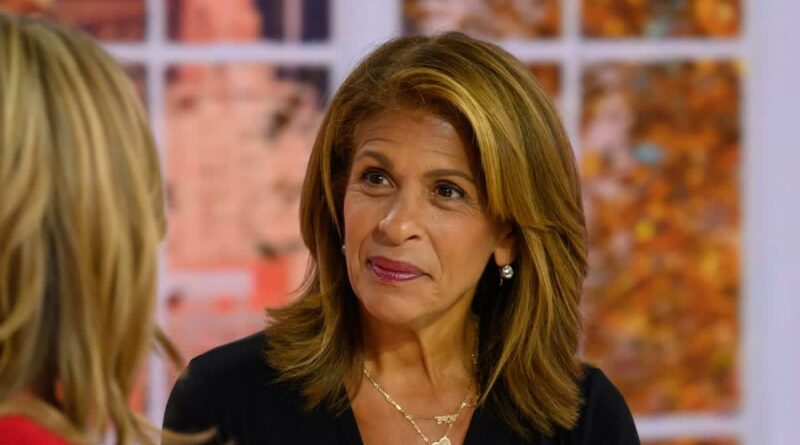 Hoda Kotb has frequently won viewers over with her simple yet chic sense of style on Today, often pairing smart pantsuits or bright dresses with her winning demeanor.

MORE: Hoda Kotb stuns with photo of ‘fan club’ for her colleague

However, each week on Today with Hoda and Jenna, fans get to decide on one outfit for the star and her co-host Jenna Bush Hager, but her latest didn’t go down as well.

VIDEO: Today’s Hoda Kotb overwhelmed by surprised by her daughters

While Jenna was given a green midi-length sleeveless dress that perfectly fit her style, Hoda was assigned an oversized white vest jacket with a chunky belt and a gold silk skirt.

The “Chooseday Tuesday” looks were met with a mixed reaction on the show itself, with Jenna suggesting to the stylist that the skirt would’ve worked better with a sweater of the same color.

Fans, however, erred more on the negative side, as most of them found the outfit to be unflattering on Hoda and believed it didn’t fit her aesthetic.

“Big no for Hoda,” one commented, with another saying: “Jenna looks great. Hoda, not so much…” A third also wrote: “Hoda’s is a No. Not the one I picked. Jenna looks good. I like the green,” with one also adding: “I picked Jenna’s but don’t like Hoda’s.”

A post shared by TODAY with Hoda & Jenna (@hodaandjenna)

Hoda’s outfit was a miss for her fans

However, when the morning news host gets to pick her own outfits, they usually end up winners, which her co-star Savannah Guthrie emphasized in a photograph deriding her own outfit choice.

Earlier that day, Savannah looked lovely in a black, belted dress, however, Hoda really stood out in a bright, orange outfit, which was perfect for the change in season.

MORE: Hoda Kotb called out by co-star over peculiar habit after on-air surprise

Taking to Instagram, Savannah shared a photo from the studio and wrote: “Some people are dressed for the first day of summer,” and directed an arrow to Hoda, before adding: “And some are not,” alongside a sad face emoji.

While black can certainly be summery, Savannah appeared to confess that she’ll be hanging up some of her dark items in favor of a summery boost.

Fans may have been divided, but most of them came to her defense to suggest that her outfit looked great regardless.