Karlie Toland, now 17 months old, is thought to be the only person in the world living with her condition. 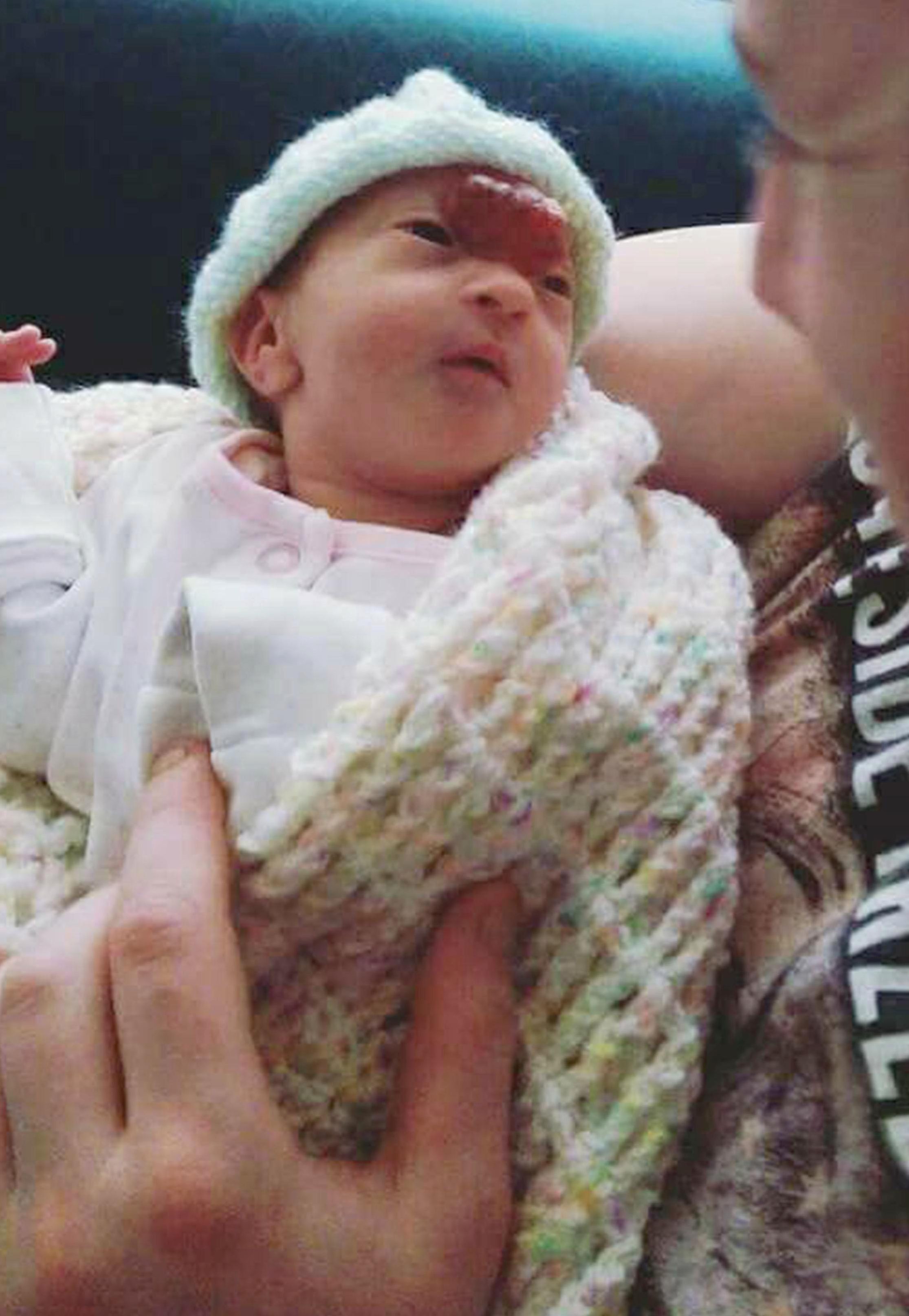 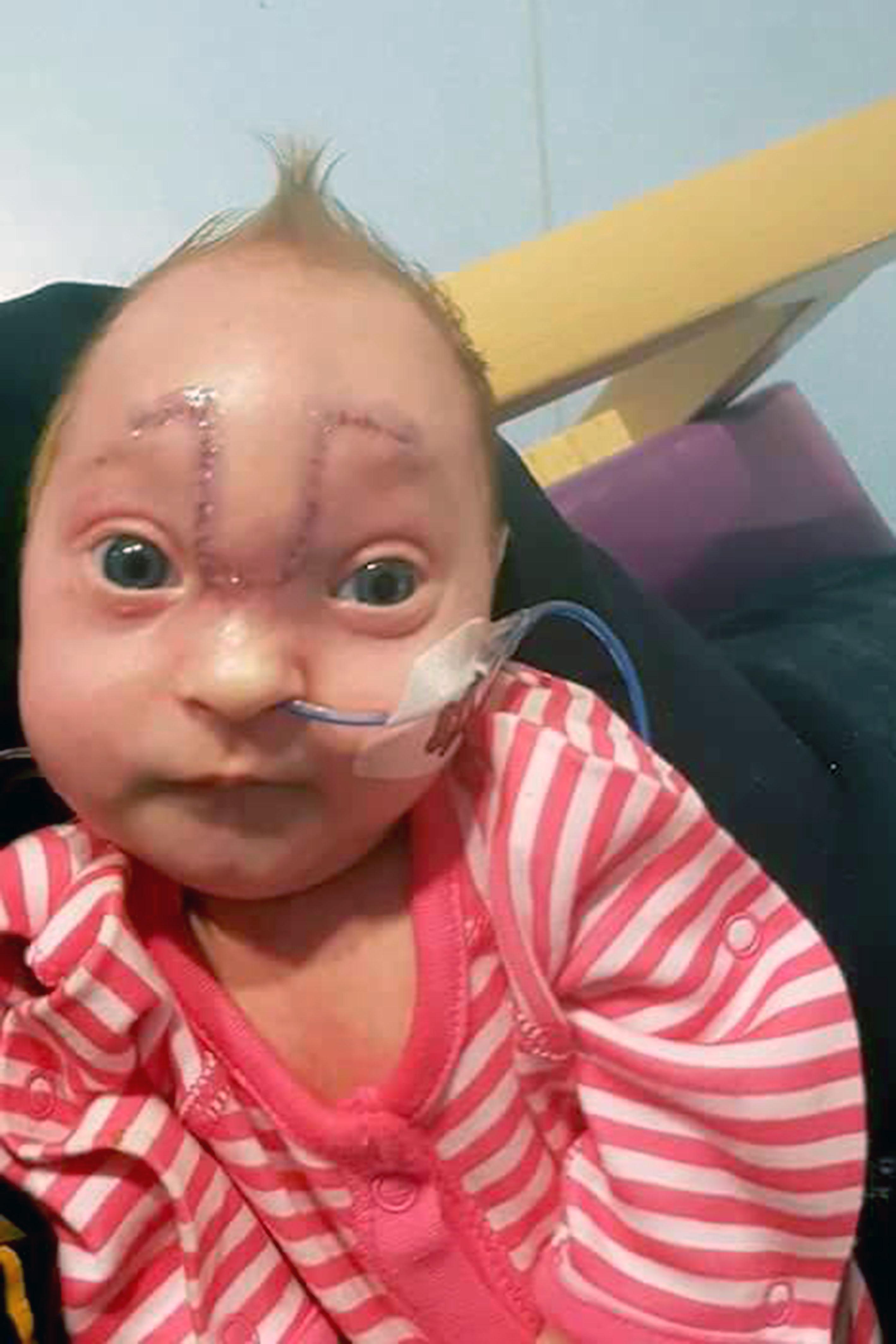 After being born with part of her brain outside of her skull – known as an encephalocele – doctors didn’t think Karlie would last longer than 20 minutes.

Doctors had told mum Gemma McCusker, 24, to prepare herself for "missing limbs, her nose to be on her forehead and that she might not even have eyes" after scans during pregnancy picked up the condition.

But Gemma and dad Kyle Toland, 20, refused to give up on her.

Four weeks after being taken home little Karlie was still clinging to life. 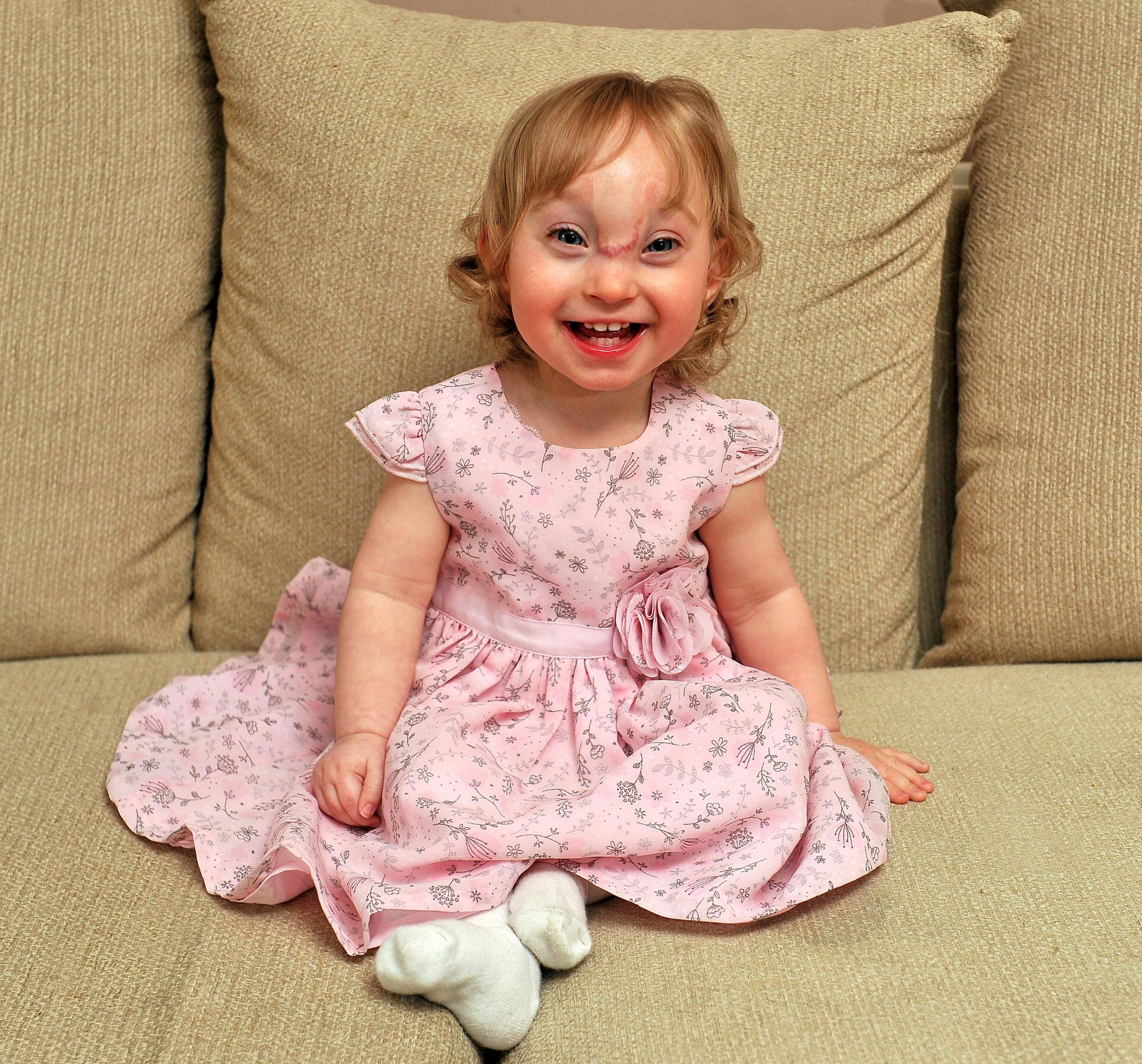 Gemma and Kyle claim they were offered no medical help for their daughter until they visited Belfast's Royal Hospital for Sick Children. 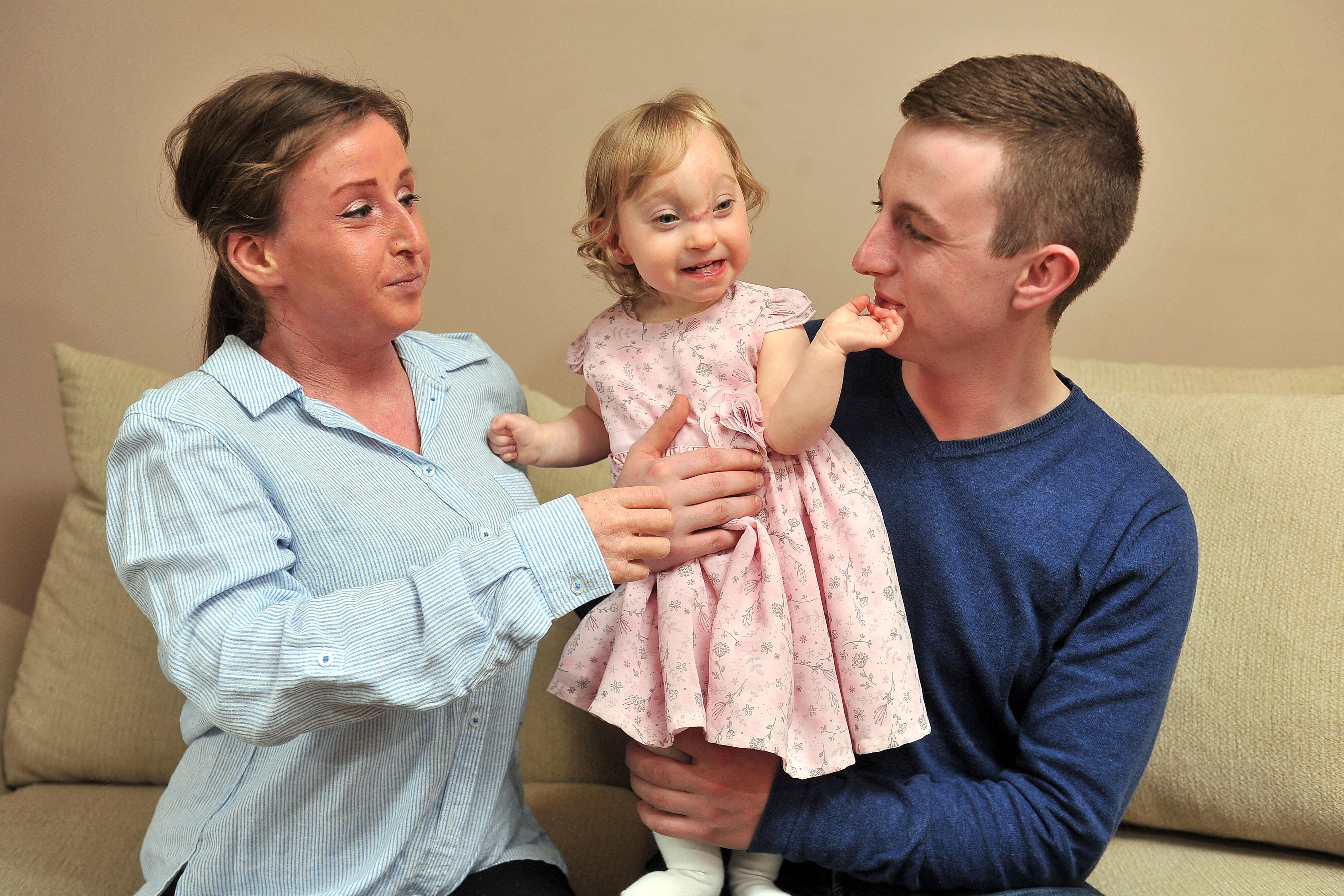 There a doctor offered to operate to repair the tissue poking through her forehead.

The surgery took just under five hours and now Karlie is laughing, smiling, talking, eating on her own and learning to crawl.

Gemma, a full time mum, said: “After giving birth I was told my daughter would die within 20 minutes.

“I was heartbroken and although she had part of her brain outside of her skull, she looked perfect. 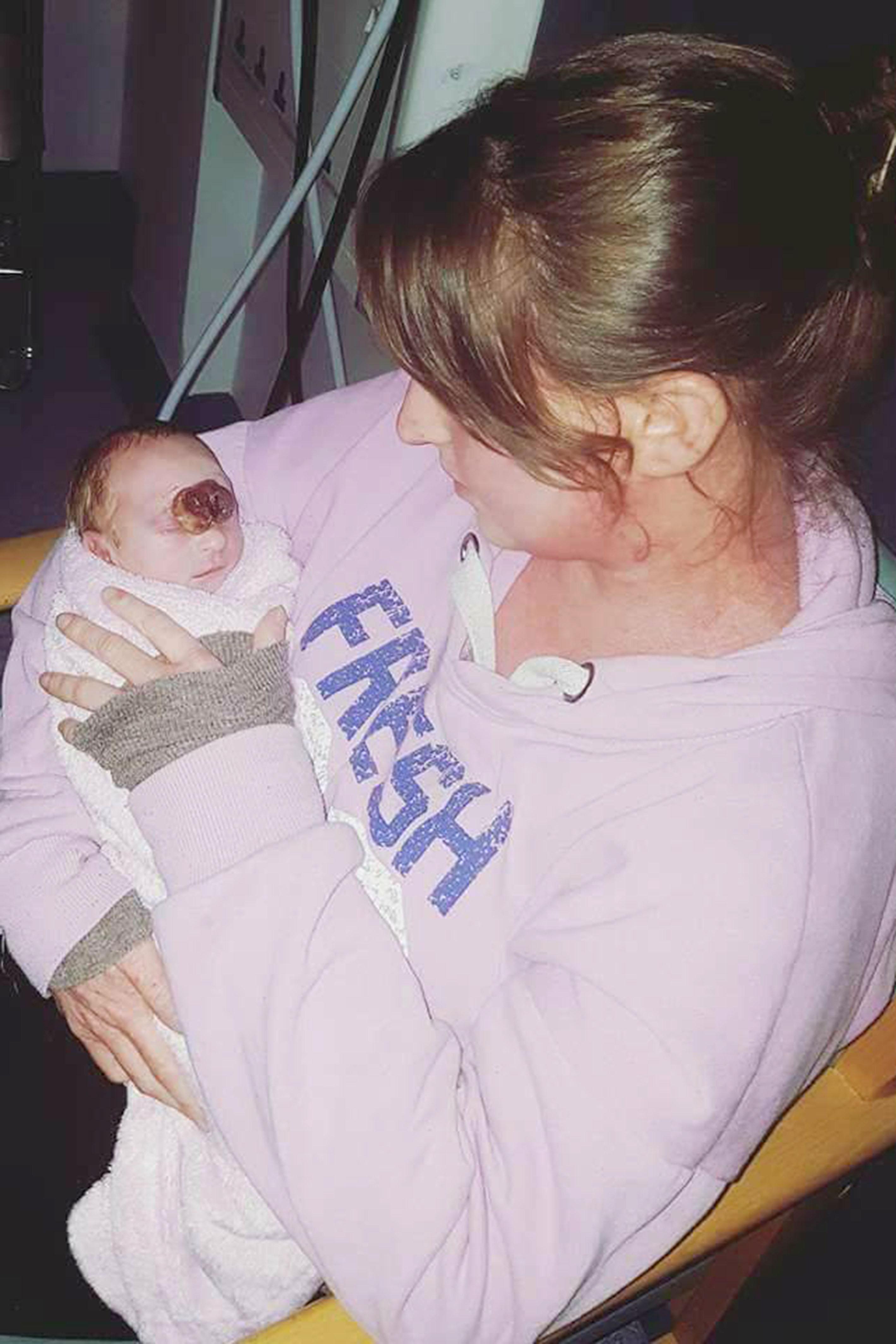 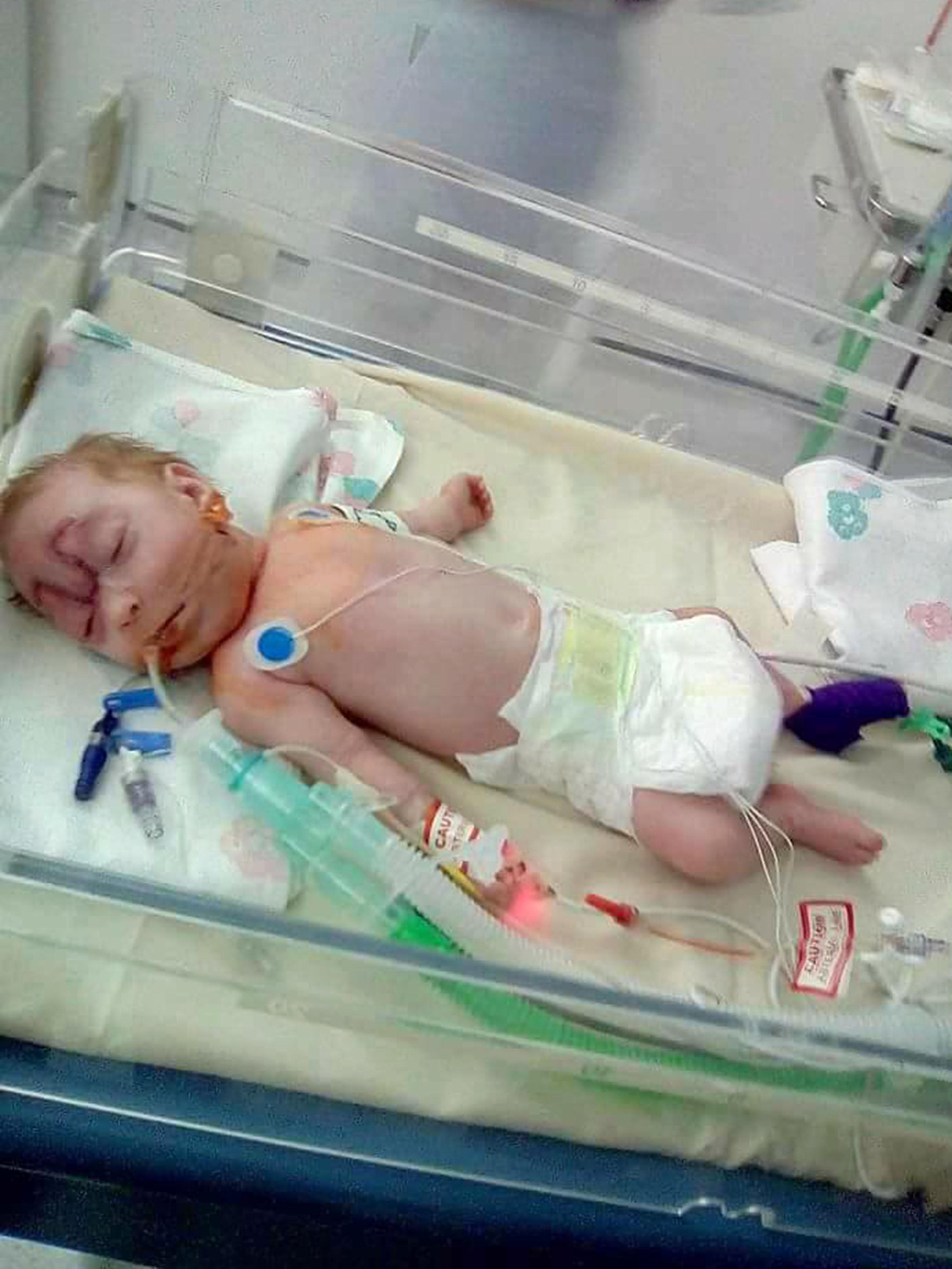 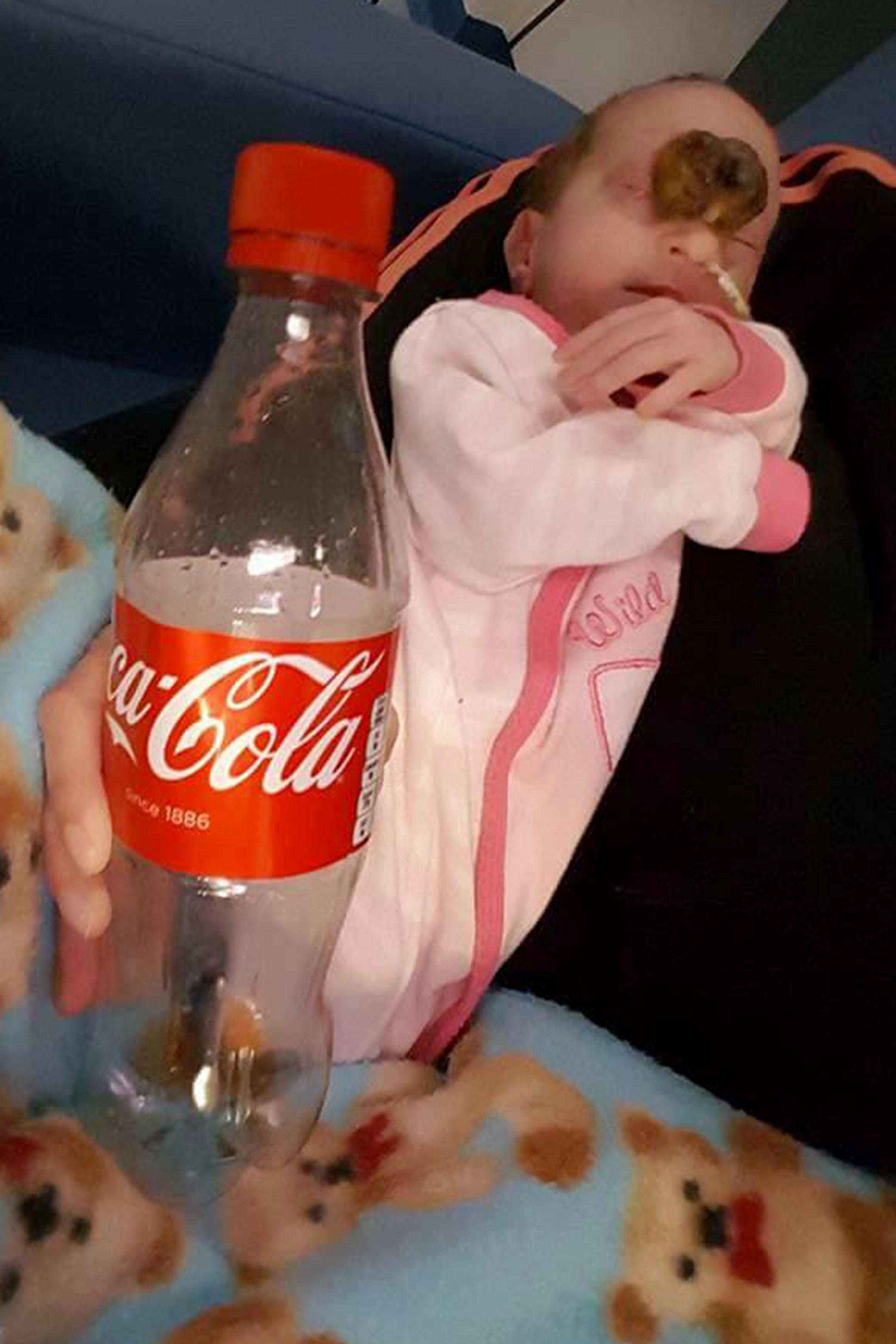 “But she refused to give up and we knew she was strong enough to pull through despite everything we were told by doctors.

“After being discharged from hospital we went home with Karlie and used bottles of sterile water at room temperature and cotton swabs to wipe away the brain fluid leaking from her skull.

“We had been told Karlie would die in the next few days but she defied everyone and once we got a second opinion four weeks later, she had the operation she desperately needed.

“Looking at her now makes me so proud, she's always smiling, laughing and happy, she's such a little miracle.” 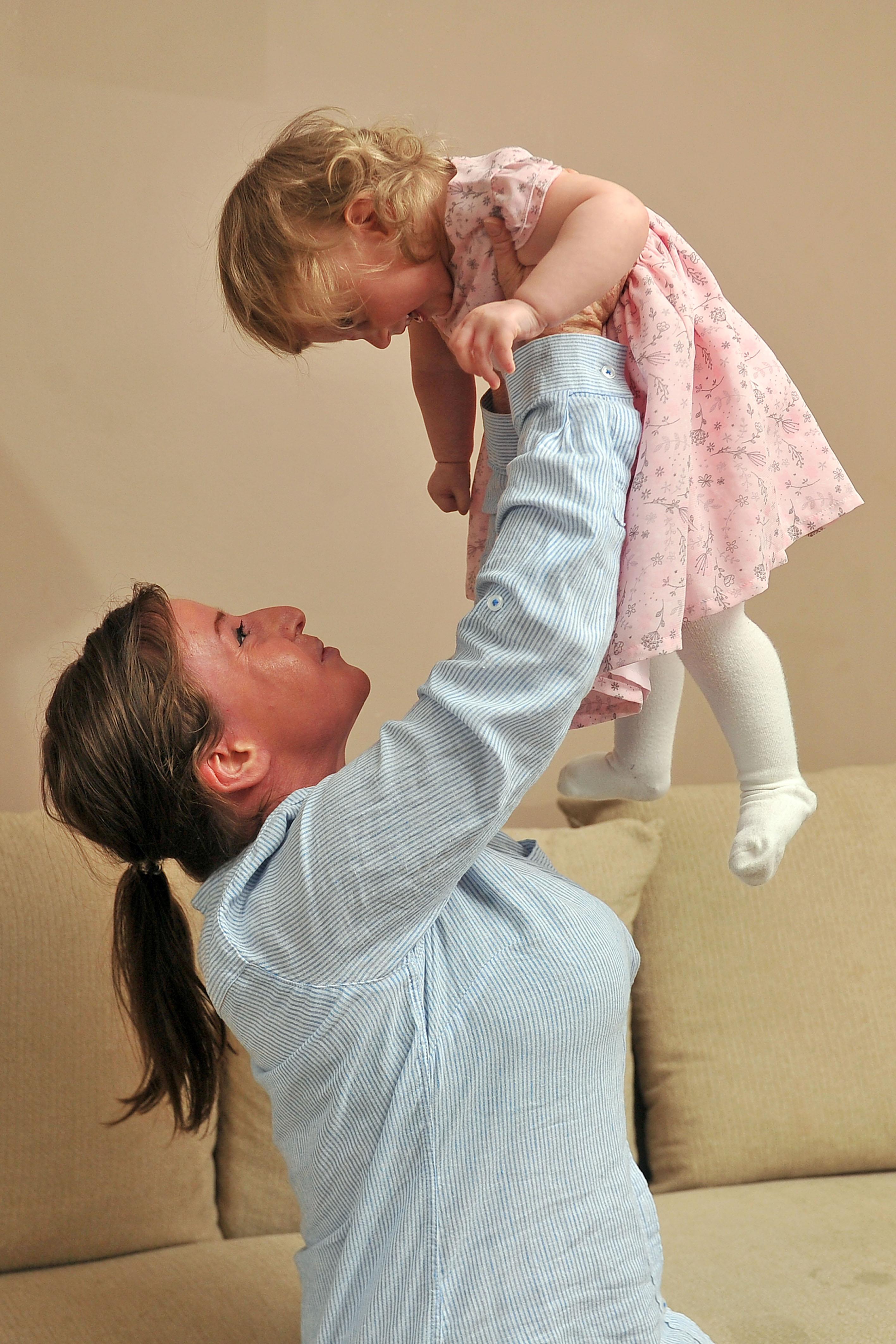 Karlie was diagnosed with five conditions shortly after birth and is thought to be the only person in the world to be alive while battling them all.

The adorable toddler also has cerebral palsy; an abnormal brain structure – known as holoprosencephaly; a missing chromozone, known as 22 deletion syndrome; microcephaly which causes the head to be smaller than normal; and encephalocele, the reason part of her brain outside of her skull.

It is not known how her conditions will affect her later in life.

“We've been told by doctors that Karlie is a miracle to be alive and she really is,” Gemma said.

“During my pregnancy I was told at my 20 week scan that there was something abnormal on her head but we had no idea what it was until she was born.

“I was told to prepare myself for missing limbs, her nose to be on her forehead and that she might not even have eyes.

Encephalocele is a rare birth defect in which the neural tube that affects the development of the brain pushes through the skull.

The neural tube is a narrow channel that folds and closes during the third and fourth weeks of pregnancy to form the brain and spinal cord.

Encephalocele is a sac-like protrusion or projection of the brain and the membranes that cover it through an opening in the skull.

It occurs when the neural tube does not close completely during pregnancy, resulting in an opening in the skull.

The exact cause of the condition is not known.

Encephalocele is treated with surgery to place the protruding part of the brain and the membranes covering it back into the skull.

“But Karlie had none of those deformities and was born with all of the correct facial features and limbs.

“She has proven everyone wrong and even after her major operation in December 2016 she was only in hospital for 48 hours before coming home.

“We couldn't believe it and although no one expected her to progress as her brain doesn't have the normal three structures, so far she is on par with other children her age.

“The only thing she is delayed with is her walking but she can stand if I told her hand so I don't think we'll need to wait much longer.”

Gemma and Kyle said the only reason their daughter is alive today is thanks Dr Mano Shanmuganathan – a neurosurgeon at Belfast's Royal Hospital for Sick Children.

“We are so thankful to Dr Mano and that he never gave up on our daughter,” Gemma said.

“His surgery saved her life and given us a future with Karlie.

“We don't know what the future holds for Karlie but we are sure she will continue to defy the odds.”