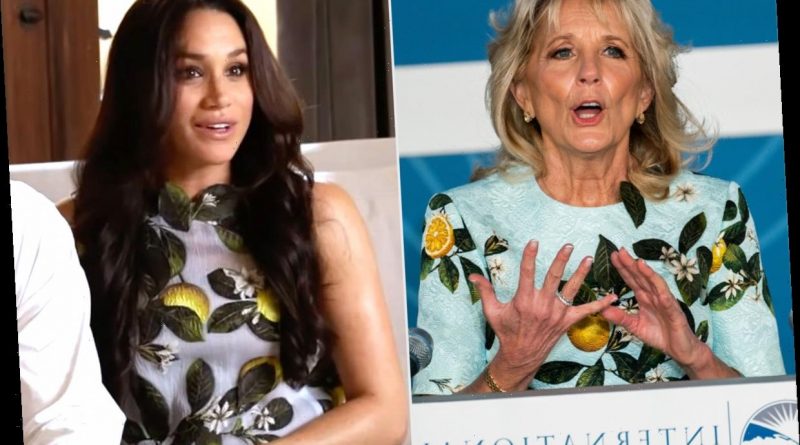 Did First Lady Jill Biden pay homage to Meghan Markle during her speech at the State Department's International Women of Courage Award ceremony on Monday? The Internet seems to think so!

Biden's speech came one day after the Duke and Duchess of Sussex opened up to Oprah Winfrey about their family's royal exit, including the staggering toll life as a royal took on Meghan's mental health. Although the First Lady did not directly address the bombshell interview on Monday, social media users are convinced she used fashion to make a subtle statement. During her speech, Biden helped the State Department honor 21 women from across the world with the International Women of Courage Awards on Monday morning, saying the recipients' "fearlessness" is a reminder that everyone on Earth is interconnected.

"Justice can only be justice if it's for all," Biden said during a seven-minute speech. "Your fight is our fight, and your courage calls us to come together again and again and again."

The 15th annual award ceremony, held by the State Department on International Women's Day, recognized women from 15 countries around the world.

The first lady said the women made an "intentional decision" to "right the wrongs of the past and build a brighter future for everyone."

Seven women from Afghanistan were posthumously honored, while the 14 living recipients were from Belarus, Cameroon, China, Colombia, Democratic Republic of the Congo, Guatemala, Iran, Myanmar, Nepal, Somalia, Spain, Sri Lanka, Turkey and Venezuela, according to the State Department.

"It's easy to think of them as mythical heroes or angels among us," Biden said in her speech. "What else could explain such herculean acts of fortitude and fearlessness?"

Also on Monday, the White House praised Meghan for opening up about her mental health struggles.

"Obviously, many of us caught the interview," White House Press Secretary Jen Psaki said during a press briefing when asked if the administration had comment on Winfrey's revealing conversation with the Duke and Duchess of Sussex.

"For anyone to come forward and speak about their own struggles with mental health and tell their own personal story, that takes courage," Psaki added. "That's certainly something the president [Joe Biden] believes."