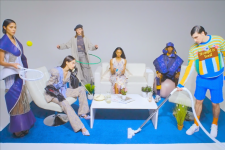 LONDON – Due to COVID-19 restrictions, the University of Westminster BA Fashion Design Sunday showcased the works of 31 graduates via fashion films during the London Fashion Week June edition.

The films were produced in partnership with Nick Knight’s SHOWstudio under three themes: Soft Focus, Modernist, and Utopia/Dystopia. A behind-the-scenes documentary about the challenges the students faced was also released at the same time.

In the Soft Focus film, director Rosie Wallin used traditional filmmaking to showcase one key look from eight of the graduates, such as a voluminous red dress by Christine Ha, a white ensemble with a ruffled cape and giant sleeves by Nicole Zerbini Melo, and a colorful chiffon dress by Sara Mackenzie.

The Modernist film by Jame Beattie presented contemporary designs from 11 graduates. Highlights include a geometric-pattern shirt and trousers by Michal John Kirby and a reworked bomber jacket by Felicity Lumley.

Utopia/Dystopia by Younji Ku features 12 designers in a work-from-home gone mad scenario. Models were working behind a desk, vacuuming the floor, ironing slices of bread, or playing mini-golf, tennis, and hula hoop in a domestic setting. A knitted sweater by Everrette Bullen that said “Straight is Great” stood out from a mix of over-the-top garments for its witty humor and joyful color combination.

Rosie Wallin, course director of BA Fashion Design at the University of Westminster, said she is proud of the students who delivered “varied, beautiful, and accomplished” graduate collections without access to college facilities and with tutorials conducted online.

“The students could have used this as an excuse to complain, to produce less, not to try so hard, not to experiment, instead they rose up. They adapted. They pushed their creativity to greater achievement. They used their solitude to dig deep and find out what they were capable of,” she added.