He would grow up to wear a dress to his high school prom, become a drag queen at 16 and inspire the hit West End musical Everybody’s Talking About Jamie. 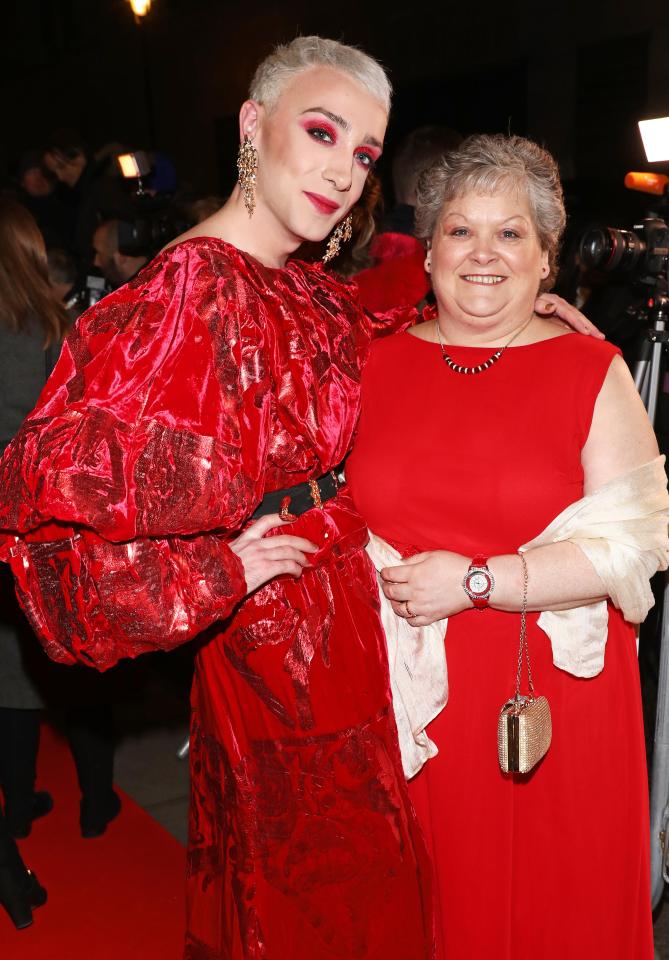 But he couldn’t have done it without his mum. Single mum Margaret never stopped her only son from delving into the dressing up box and, when he was seven, she even made him dresses from scratch, with help from Jamie’s gran.

Margaret told Fabulous Digital: “Since he was really small he was wearing my clothes and dancing around the living room. When he was dressing up he would always pick the girls’ costumes rather than cowboys or Indians.”

Jamie added: “There was always fights over who got to wear what princess dress when I was younger. I think most people say their first memory of me is running around in a tutu in a pair of fairy wings…”

For Margaret, the dressing up was just “normal” and “Jamie being Jamie,” although his dad was not so keen. “He was a rugby player and he would’ve preferred me to go down that route,” said Jamie. “But obviously that didn’t happen.” 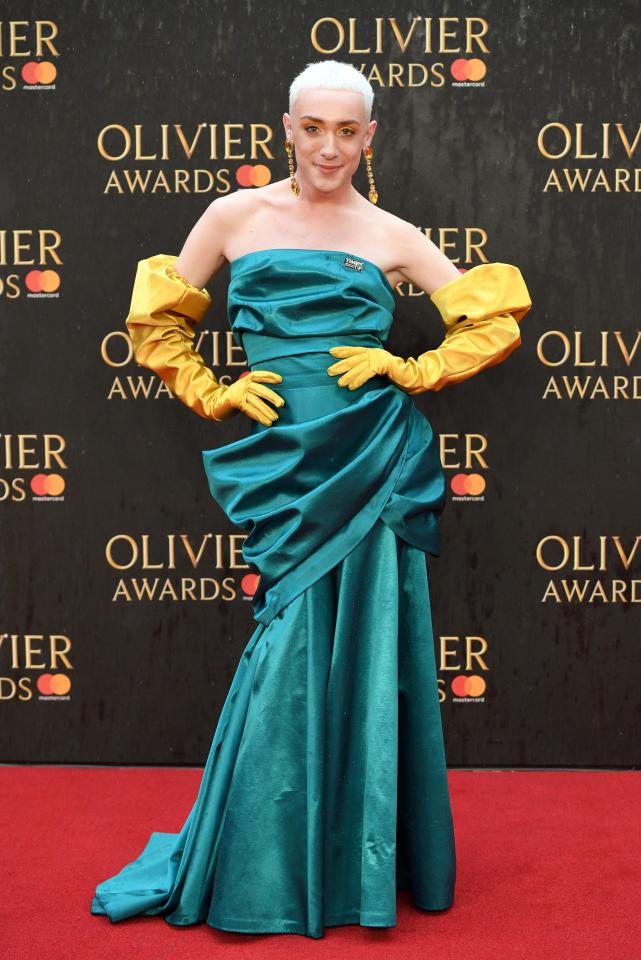 Jamie’s parents split when he was seven, and Margaret allowed her only son free reign to dress as he wanted in the house.

“I encouraged him to be open and free to be honest without any restrictions,” Margaret said.

“Why would I put restrictions on it? It’s him forming his own character, it’s what he wants to do and if he can’t be doing that at home where he can do it.”

Growing up in a small village in Durham Jamie – now 23 – found friends and family accepted him.

“We are quite a small family anyway because I’m an only child and mum’s friends were always really accepting because mum is like queen of the village, she’s really respected there. 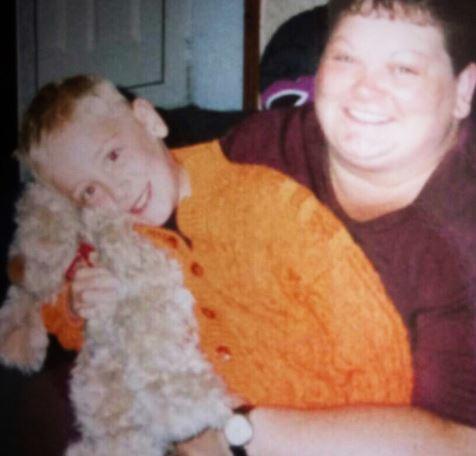 “My grandma used to have a carpet and curtain shop and she and mum would make me little dresses out of the spare curtain samples. I would be like ‘I want a dress like this’ and they would do it for me.

“Mum also had this fabulous, really aggressive print dressing gown that I used to wrap around me and I would tie it in different ways. I’ve still got that now.

“I kept the dressing up in the house except one village production of Aladdin.

“I played camp Genie of the lamp and, at the end, Aladdin had one wish left and he’d granted it to me.

“My wish was to be like Kylie Minogue so I could dance and sing, and I whipped off the robe and I had these tiny little gold hot pants on and I did a lip-synch to Spinning Around.” 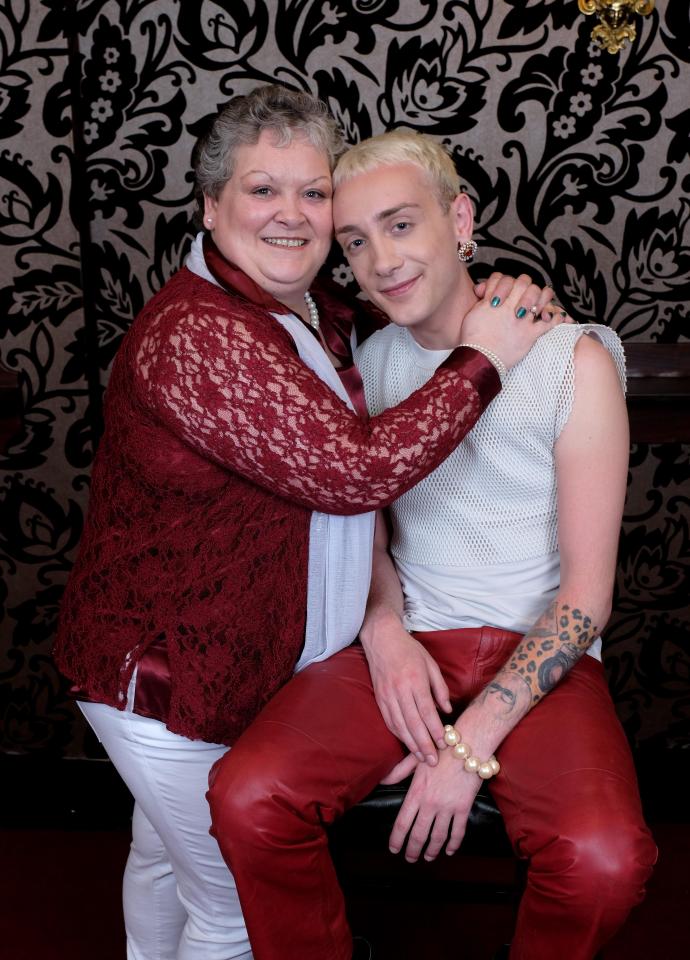 In primary school Jamie was comfortable to take on female leads in school production – playing Anne of Cleves in Henry VIII and the Mayor’s Wife in his year six assembly.

But in secondary school, Jamie was targeted by cruel bullies.

Jamie said: “When I got to secondary school I got called ‘gay’ and verbally abused a lot.

“All the memories I have are when I was walking home from school and it would be people shouting across the road at me every single day. Fully grown adults as well as kids.

“I couldn’t understand why adults felt the need to shout abuse at me – and I was in my school uniform. It was even like I was dressed flamboyantly.” 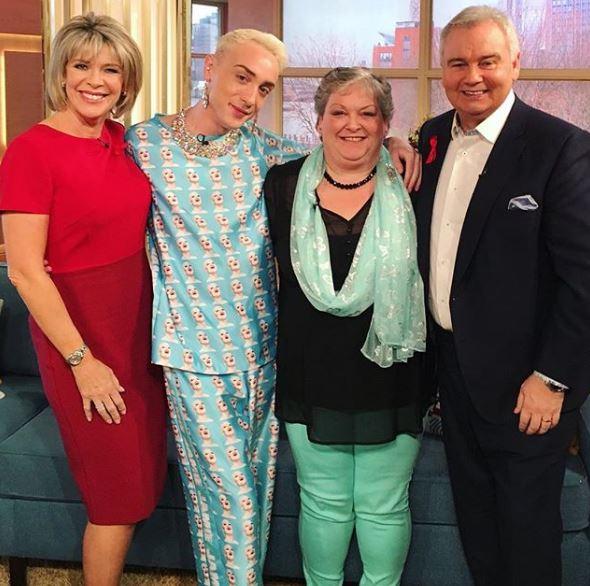 At 14, Jamie came out as gay to his mum – and her reaction was brilliant.

He said: “I’d known my whole life but I told Mum when I was 14 and, to soften the blow, I said ‘Mum, I think I might be bisexual’.

In typical down-to-earth style, Margaret admitted: “I’d have been more surprised if he told me he was going in the army.”

With a background of bullying, Jamie’s decision to wear a dress to his high school prom is even more extraordinary – and brave,

But it was mum Margaret who came up with the idea. 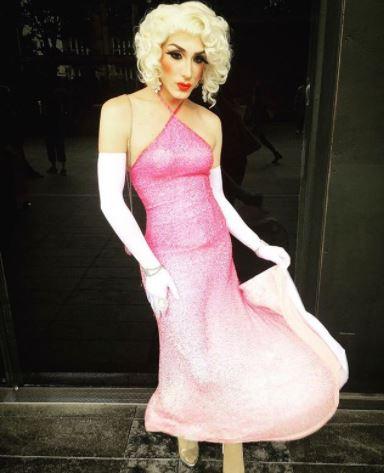 As most of you know this woman is my everything. I’d be nothing it wasn’t for the constant love and support she’s given me throughout my entire life. I am the luckiest person alive to have been blessed with her. Such a beautiful person inside and out. I love you so much Mummy you are my world please never change. Lots of love to you this Mother’s Day and every other day #MothersDay #myinspiration

As most of you know this woman is my everything. I’d be nothing it wasn’t for the constant love and support she’s given me throughout my entire life. I am the luckiest person alive to have been blessed with her. Such a beautiful person inside and out. I love you so much Mummy you are my world please never change. Lots of love to you this Mother’s Day and every other day #MothersDay #myinspiration

“I was fifteen and we were having the discussion about prom,” he said. “I was jealous that all the girls got to wear fabulous dresses and then I had to go in a suit. Mum said ‘’Why don’t you go in a dress then?’

Margaret added: “How would he have turned up in a boring old suit? It wouldn’t have been him! He would have been so miserable.”

Although they were convinced it was the right decision, both were concerned about the reaction of his classmates and came up with an incredible way to protect him on the night.

Jamie revealed his plan to a documentary company, who agreed to send a film crew along. The result was the 2011 BBC3 documentary Jamie: Drag Queen at 16. 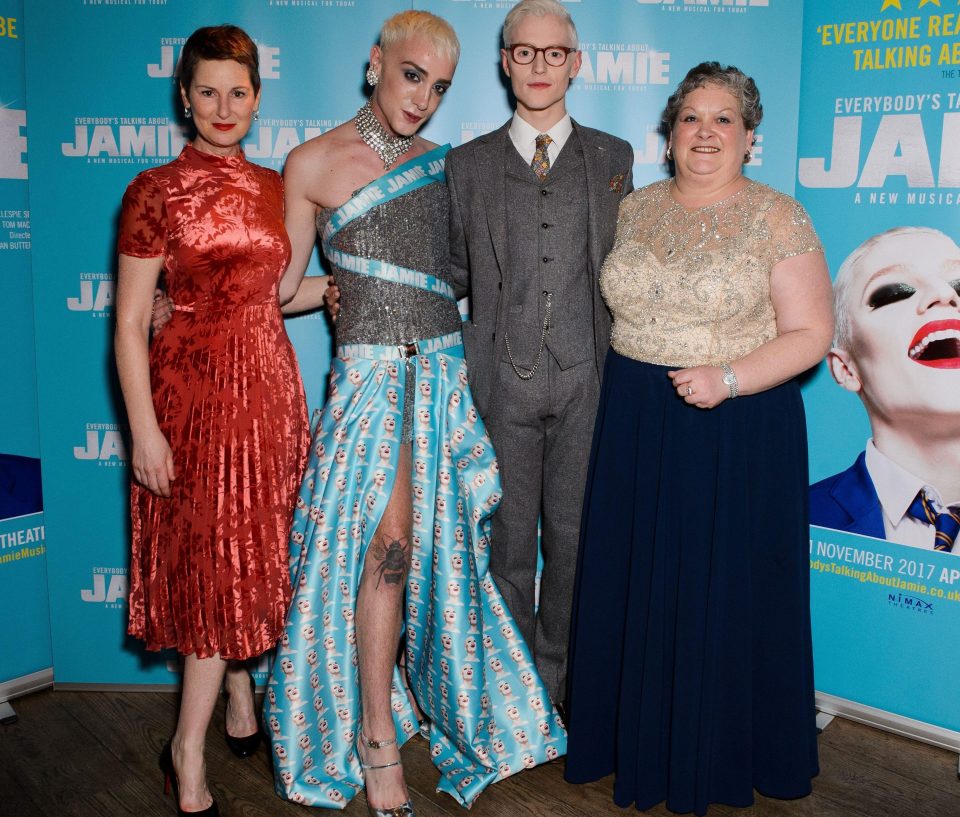 Margaret said: “It wasn’t like we were doing anything to get out there and be famous, it was just really for his safety because he wouldn't be beaten up if he had a film crew there.”

In fact, the reaction was mostly positive.

He said: “Everyone loved it. Even at prom there were a lot of people supporting me who I didn’t think would and had been a bit funny in the past.”

The documentary also saw Jamie transform into his alter ego, Fifi La True – a name that Margaret helped him choose.

“Fifi La True just came from being really honest and true to yourself and obviously I love the name Fifi because it’s quite a camp name. 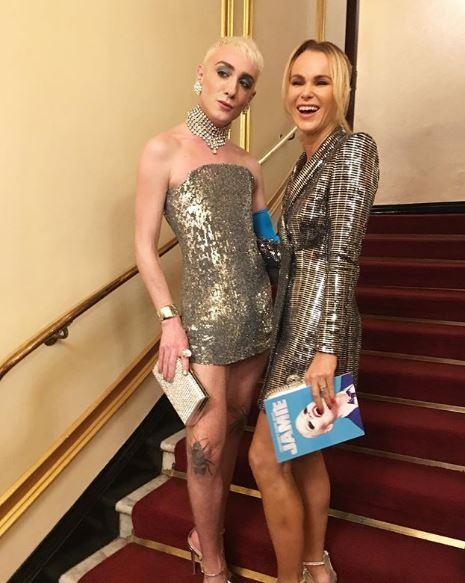 “We did go through quite a lot of names. There was like Courtney Courgette, Lady Le Feel Free and a few more… we both had a good giggle over those.”

Although most clubs wouldn’t let Fifi perform – as Jamie was under 18 – Margaret chaperoned him on the gigs he did get.

As his career on the drag circuit took off, Margaret helped him with his outlandish wardrobe

She said: “He went and picked his own clothes but sometimes he puts a lot of colours and I’d think, ‘ugh’. I don’t do more than three colours together but Jamie’s will out 100 clashing colours together.”

While he made his name in drag, he was unaware that musician Dan Gillespie Sells and writer Tom MacRae were busy writing a musical about him, based on the BBC3 documentary. 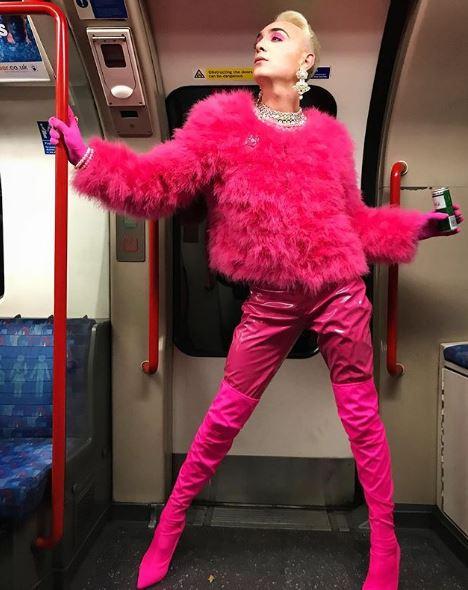 Now a huge West End hit, Everybody’s Talking About Jamie was recently nominated for five Olivier Awards and, last month, Margaret made Jamie a brand new dress for his appearance on the red carpet for the awards ceremony.

The pair have now seen the show 20 times and Margaret admits she is moved on every occasion.

She said: “I knew nothing at all before I saw it, except Jamie said ‘Mum there’s a song in it called My Boy and don’t wear makeup because you will cry.

“It doesn’t matter how many times we see it, I always say ‘I’m really not going to cry this time’ but I do.”

Although Margaret still lives in Durham and Jamie has moved to London, the pair are as close as ever – and even colour co-ordinate their clothes when they are out together. 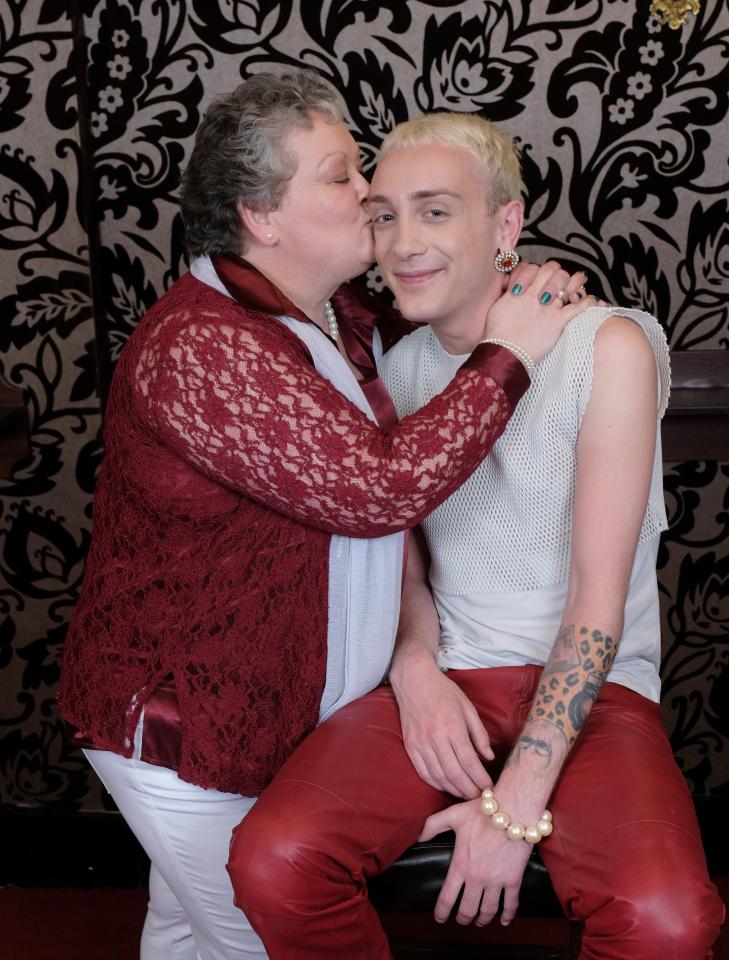 They put their amazing relationship down to “honesty.”

“We talk about everything,” said Margaret.

“We fight – we’re very similar and we do have the same personality – but we never ever fall out forever.

“We will go off in separate rooms and then we’ll say right, let’s go have a cup of tea and then it’s done.

“I think you’ve just got to be honest with each other and it makes everything a lot easier.”

Margaret has advice for other mums who might feel their child is “different.” 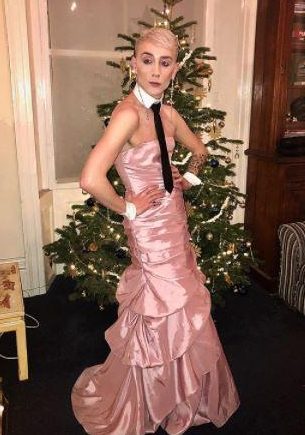 She said: “Just embrace them. Different is good! Who made normal, normal? Who put them in boxes? “They don’t have to be. I’m sure Einstein’s mother didn’t think he was going to be as famous as he was so it could be that it’s your child. Just love them and cherish them – they are all individual.”

She couldn’t be prouder of Jamie.

“It’s amazing,” she said. “I wasn’t even in labour but I’ve got a boy AND a girl! The only thing is, he steals my makeup?”

Everybody’s Talking About Jamie will be broadcast live from the Apollo Theatre in London’s West End to more than 500 cinemas across the UK and Ireland on Thursday 5 July at 7.20pm. Find you nearest cinema and book tickets at JamieInCinemas.com.

An official West End cast recording is now available digitally worldwide and on CD in the UK.

The show is currently booking until 6 October 2018 in the West End at the Apollo Theatre. Tickets can be found at everybodystalkingaboutjamie.co.uk.