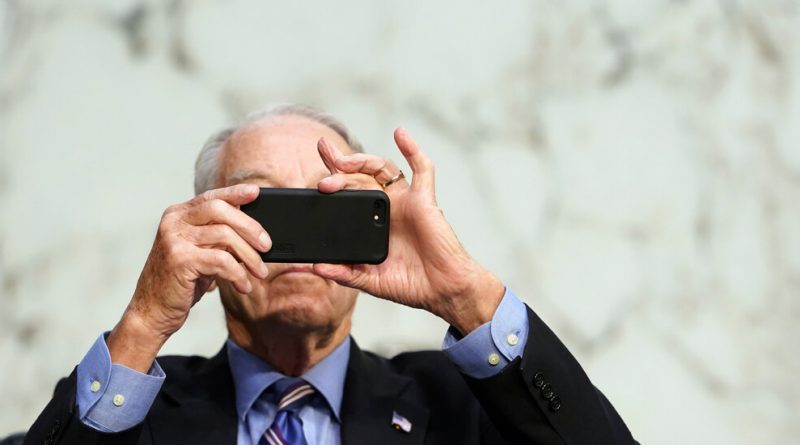 Each of the big social platforms handled the challenges of the Trump presidency in its own unique way, scrambling to address or neutralize various urgent and contradictory concerns from users, advertisers, lawmakers and occasionally the U.S. president himself.

But there was one idea that none of them could resist trying, no matter how little it had done for the last platform to use it: the informational label.

Since 2016, users across platforms have been informed that some things they were seeing or sharing were disputed by outside fact checkers. On Facebook, users were directed to Wikipedia articles to provide information about the publications they were reading. On YouTube, context from Wikipedia was added beneath some videos that dealt with conspiracy theories and conspiracy theory-adjacent subjects. In contrast to the content they were meant to modify, these labels were inert, uninteresting and frequently absurd.

No platform leaned as heavily on warning labels as Twitter, which spent the year before the election labeling the President’s tweets with evolving disclaimers.

In May: “Get the facts about mail-in ballots.”

In June: “This Tweet violated the rules about abusive behavior.”

Though some Twitter labels, which it called “public interest notices,” came with limits on the ways in which tweets could be shared on the service, there is scant evidence that labels alone did much. Some just led to backlash.

An informational label alone — particularly one that doesn’t provide information that couldn’t easily be found elsewhere — represents a particular set of assumptions about what the problem is in the first place. It assumes that users sharing disinformation are merely mistaken; that assertions of external authority and expertise are persuasive; that a Wikipedia article is enough to transport someone from a flat earth back to the round one they chose to leave behind; or that a warning about forbidden information won’t be enticing, but discouraging. (What kind of moon landing conspiracy theorist isn’t aware of the official — and, by the way, true — story about American astronauts landing on the moon?)

The labels did, however, provide insights into how those who run the platforms were thinking at the time. Sunlight is the best disinfectant, the platforms seemed to say, but the labels resembled just a few more additional fluorescent tubes installed in the ceiling.

In short, the tech platforms responded to challenges of user moderation with performances of helplessness hiding assertions of power. These firms wrote the rules for their users. They chose when not to enforce them. The labels told us what was wrong and what wasn’t going to be done about it. They may as well have said “good luck.” Then came Jan. 6.

Maybe you’ve heard the phrase “Twitter isn’t real life” in reference to any number of situations where the consensus of some group of people on the service collided with an external reality (the Biden campaign, for example, embraced the mantra before and after Mr. Biden won the Democratic primary).

Much of the time this point is made with an eye roll — get off the computer, get outside, talk to people who aren’t tweeting all the time if you want to know what’s really happening. Of course, it’s the sort of thing you hear most of all on Twitter itself, where it once sounded wise but, over the years, has started to sound, sometimes, like wishful thinking that borders on desperation, especially when it comes from people — and I will only claim to be talking about myself here, other reporters can speak for themselves — who owe so much to the service, professionally, that talking about it without some sort of disclosure feels borderline unethical. (Imagine the informational label: “This reporter reads Twitter in bed on both sides of the day.”)

To be fair, Twitter changed fast. In 2015, it was novel, newsworthy, but mostly understood as a joke when Hillary Clinton and Jeb Bush traded insults on Twitter. By 2017, President Trump was attempting to make border policy with tweets.

Much of the planning for and lead-up to the breach of the Capitol by pro-Trump rioters unfolded in plain view on Twitter, where it was understood by different groups of users, in utterly incompatible ways, to be both “real life” and all talk — this is among the reasons the event took so many people by surprise, while others insisted that it had been inevitable for years.

Twitter is certainly used for different things. It’s an invaluable tool for activism, as its role leading up to and through Black Lives Matter protests this summer made clear, again. It’s also a place where people try to pump penny stocks. At its most effective, it’s a tool for forcing the issue (doing so for brands is how it makes money).

As it relates to President Trump, the American media was quicker to adopt Twitter than American politicians, but American politicians understood intuitively what it was good for. It is effective not for deliberation or argument, as plenty of prominent Twitter users seem frustrated to still believe, or for building durable communities, but for making yourself seen, finding your people and letting them find you, borrowing or building a following through performance, and for manifesting all of the above into some sort of power that, if not exactly external, was connected to the world outside Twitter.

In other words, Twitter is a pretty appealing place to run a certain kind of political campaign. You can say whatever you want, even if it’s not true. You can appear available and accessible while also refusing to engage with anyone, for any reason. It’s a place where you can perform false legitimacy well enough to reap many of its benefits.

The Trump campaign’s dozens of election-related lawsuits failed in court, as evidenced by hundreds of pages of bizarre and humiliating transcripts, but they did just fine on Twitter, where they existed as a collection of symbols of legal authority and action, as floating claims of proof, and as an endless feed of promises and updates.

As useful as Twitter is for campaigning — and this could be said of most contemporary social media — it’s obviously not a great tool for the administration of government. It has been useful for revolutionaries around the world as a way to briefly assert power against governments; later, it was used by governments to crack down on opposition.

President Trump always split the difference. He simply never stopped campaigning, he never logged off, he posted what he wanted, he meant what he posted, he tweeted like a revolutionary one moment and like the voice of the state the next. He turned his Twitter back against his own government, and nobody could stop him until his supporters started battering down the doors of the Capitol.

Mr. Trump understood that, through it all, Twitter was his to use as he pleased — as an insurgent platform, as a bully pulpit, as a gladiatorial arena, as a gallows, as an executive desk and, finally, as a bunker.

The Most Special Tweeter Until He Wasn’t

The media that began the Trump presidency wondering if he would stop tweeting after the inauguration (“I’m going to be very restrained, if I use it at all, I’m going to be very restrained,” he said as president-elect in 2016) is ending that presidency with conversations about the meaning of his ban from the platform, which was effected late last week. That conversation is accompanied by a near-industry-wide effort by tech companies to sever ties with the president, his office and his campaign.

The central story is simple enough. Twitter was always able to ban Mr. Trump. He broke rules that Twitter says it enforces for its users — rules that Twitter made in the first place. Twitter had repeatedly admitted that this was bad but, like Facebook, decided not to ban him, citing the public interest (over which it has assumed a guardian role).

Then, after the Capitol siege, Twitter made a new case. The reasons the company offered for the ban and the reasons that have been suggested by others for keeping him around can be summed up as follows: He is the president. Likewise for the ban: Soon he will not be president. Twitter allowed him to break rules and then one day it didn’t.

In its official statement about the ban, Twitter alluded not just to its own rules, but to the outside world, suggesting an imminent risk of further violence. (It specified two of Mr. Trump’s tweets that “could inspire others to replicate violent acts” as well as “the criminal acts that took place at the U.S. Capitol on January 6, 2021.”)

Twitter elaborated on this thinking in an update in which it said it had banned more than 70,000 other accounts (many clusters of them, apparently, run by a single person) for “sharing harmful QAnon-associated content at scale.”

The prospect of a ban of the Trump account (also, of bans on harm-causing accounts) had been the subject of a very public debate for years — especially on Twitter — but its arrival was still a shock. The same people who had insisted for years that Big Tech was out to persecute the president do not seem to have prepared for the frequently raised inevitability that his account might get banned. Others who have been pressing Twitter to enforce its own rules — including many reporters — seemed to believe, deep down, that such a thing wasn’t plausible.

The way Twitter’s predicament has exploded across the service has been one more demonstration of the service’s ability to capture discussions — between politicians, members of the media, activists, celebrities, pundits and the general public — and arrange their participants into an almost-discourse, a blob of perpendicularly conducted campaigns whose occasional overlap serves mostly to reproduce contempt.

If anything close to a consensus position has emerged, however, it’s that Twitter’s ban of the president is proof of the company’s unprecedented and unaccountable power. If this is correct, it didn’t become so on Friday, neither for Twitter nor some of its (much larger) tech peers, who simply exercised a power they’ve had for years.

The concept of “precedent” is no more relevant on social platforms than the countless other civic and legal terms they’ve borrowed over the years — free speech, free assembly, the town square, “courts” with systems of “appeal” — in their own brazen performances of legitimacy. Twitter’s ability to ban the president is incredible. So was its ability to provide, for four years, a private, supra-executive branch of government for a man who very much wanted one.